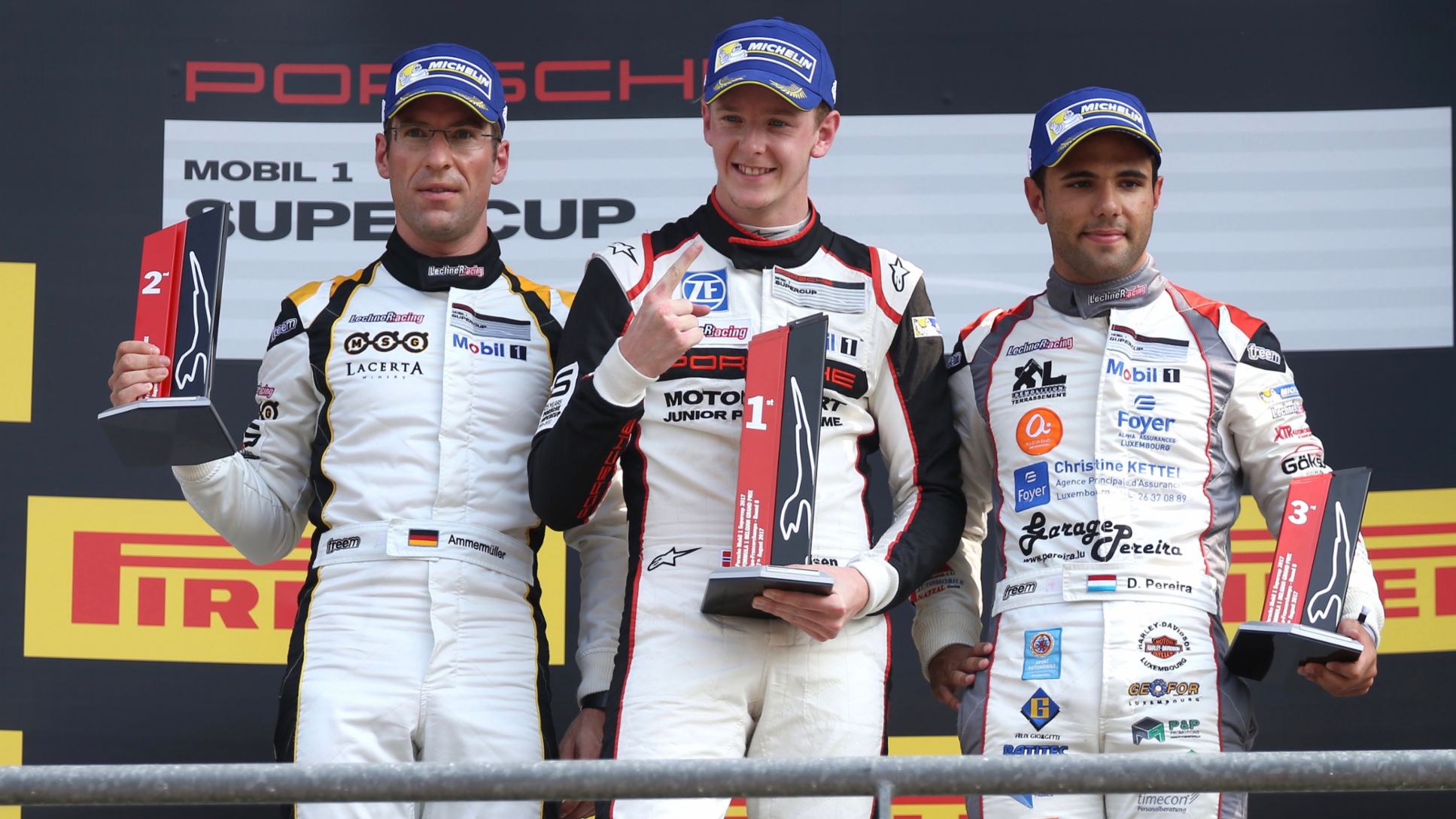 The duel for the crown of the Porsche Mobil 1 Supercup has come to a head. Porsche Junior Dennis Olsen won round seven and eight at Spa-Francorchamps/Belgium in the Porsche 911 GT3 Cup.

On Saturday Dennis Olsen (N/Walter Lechner Racing Team) beat Mattia Drudi (I/Dinamic Motorsport) and Michael Ammermüller (D/Lechner MSG Racing Team) to the finish, and on Sunday he relegated Ammermüller and Dylan Pereira (L/Lechner Racing Middle East) to the other podium steps. “Now only eight points separate me and Michael in the championship and we still have three races left on the calendar, with a total of 60 points still to be won. That’ll be really exciting for everyone. I’m feeling strong and I’ll attack,” said Olsen after the podium ceremony.

Olsen took off from pole position just before the Formula 1 race on Sunday witnessed by spectators in the packed grandstands. The 21-year-old Norwegian immediately settled in at the front of the field. Two safety car phases eroded the gap that Olsen had built, however the Porsche Junior held tight to his lead until the finish. In the meantime, spectacular overtaking manoeuvres were underway behind him – one of them in lap ten pitched Ammermüller from third to second place. “After a collision between two cars, radiator fluid was left on the track and the safety car had to be deployed. When the race went green again, Nick Yelloly slid slightly to the outside which left the door open for me to get past. That allowed me to earn 18 points for second place and I think ultimately every point could be decisive in the championship,” explained Ammermüller.

Pereira also profited from Yelloly’s off and he was rewarded with a podium spot shortly before the end. This marks the third podium result for the Luxemburg racer so far this season: “I managed to slip through and I’m thrilled. We’re competing in Monza this coming weekend. I had a great test there and it’d be fantastic if I could be amongst the top three again.” The Spa trophies were awarded by Uwe Brettel, Head of Sales at Porsche Motorsport, and Max Welti, the former motorsport boss at Porsche and one of the founders of the Porsche Supercup in the year 1993.

Britain’s Nick Yelloly (MOMO-Megatron Team Partrax), who contested his first Supercup race weekend this year, saw the flag in fourth place. Fifth place went to Porsche Junior Matt Campbell (AUS/Fach Auto Tech) which earned him important points towards the championship: “We’ve all edged closer in the points and I’m pleased about that. I started the race from ninth and finished on position five. The two safety car phases were good for me, because I was able to make up positions each time. The competition in the Supercup is incredibly tough and it’s very difficult to overtake.” Steven Palette (F/Martinet by Almeras) crossed the finish line in sixth place. The trophy for the best B-class driver went to Mark Radcliffe (GB/IDL Racing). The internationality of the series at the Spa round was reflected in the fact that nine different nationalities were represented in the top ten drivers.

In the championship, Olsen has closed the gap to Ammermüller, making the situation gripping with three races left. Ammermüller ranks first with 150 points, while Olsen sits just eight points behind him (142). Daniel Cammish (GB/Lechner MSG Racing Team) has 100 points to his credit and is only nine points ahead of Campbell. In fifth, Robert Lukas (PL/Olimp Racing) lies within striking distance with 85 points. The competition is also proving tough in the B-category: Due to a collision-related retirement of Egidio Perfetti (NL/MOMO-Megatron Team Partrax) and Roar Lindland (N/MRS Cup-Racing), Roland Bervillé (F/Martinet by Almeras) now holds the lead of the amateur classification. In the Nations League, Germany leads with 150 points ahead of Norway on second (142).

A look back at race 7

On the rollercoaster circuit in Belgium’s Spa-Francorchamps, the 21-year-old Norwegian beat the 30-strong international field at the wheel of his Porsche 911 GT3 Cup. Mattia Drudi (Dinamic Motorsport) from Italy clinched second place, with Michael Ammermüller (Lechner MSG Racing Team) from Germany claiming the third grid spot. “This win feels really good. It’s the first time I’ve driven here in dry conditions and I first had to get used to the braking points. It must have worked quite well, otherwise I wouldn’t have won,” said Olsen, with a laugh.

Eleven races on eight weekends make up this year’s Porsche Mobil 1 Supercup calendar. Spa-Francorchamps hosts a double-header, with drivers from 16 countries contesting round seven on Saturday and round eight on Sunday. Olsen posted pole position for both races, and today managed to convert it into an early lead. But his rivals didn’t make it easy for him: Drudi stayed glued to Olsen’s bumper over the first five laps, with the current championship leader Ammermüller doing the same to Drudi. In lap six, however, Olsen managed to eke out a one-second advantage and from that point proceeded to bring the race home.

For Drudi, this marks his first time this season in the top three: “I’m very, very happy to climb the podium in second. Michael Ammermüller gave me a hard time in the race, but I was able to fend him off. I was also very pleased with the setup of my car. Things can continue like this,” said Drudi. Ammermüller claimed the third grid spot. “There was no way for me to get past Mattia Drudi. He was slightly faster than me on the straights, however I caught him in the corners. I’d hoped for more, but for the time being I have to settle for third place,” said Ammermüller.

Daniel Cammish (Lechner MSG Racing Team) crossed the finish line in fourth place. In the eleven-lap race over 76.920 kilometres, the British driver set the fastest race lap in 2:26.287 minutes. Fifth went to Robert Lukas (PL/Olimp Racing) ahead of Porsche Junior Matt Campbell (AUS/Fach Auto Tech). “That wasn’t an easy race. I had several tough battles for positions early on and it took some time for me to push through. My car’s balance was good,” explained Campbell. Egidio Perfetti (NL/MOMO-Megatron Team Partrax) was the fastest driver in the B category.

Next up on the Porsche Mobil 1 Supercup calendar is round nine on the high-speed circuit of Monza (Italy) from 1 to 3 September.