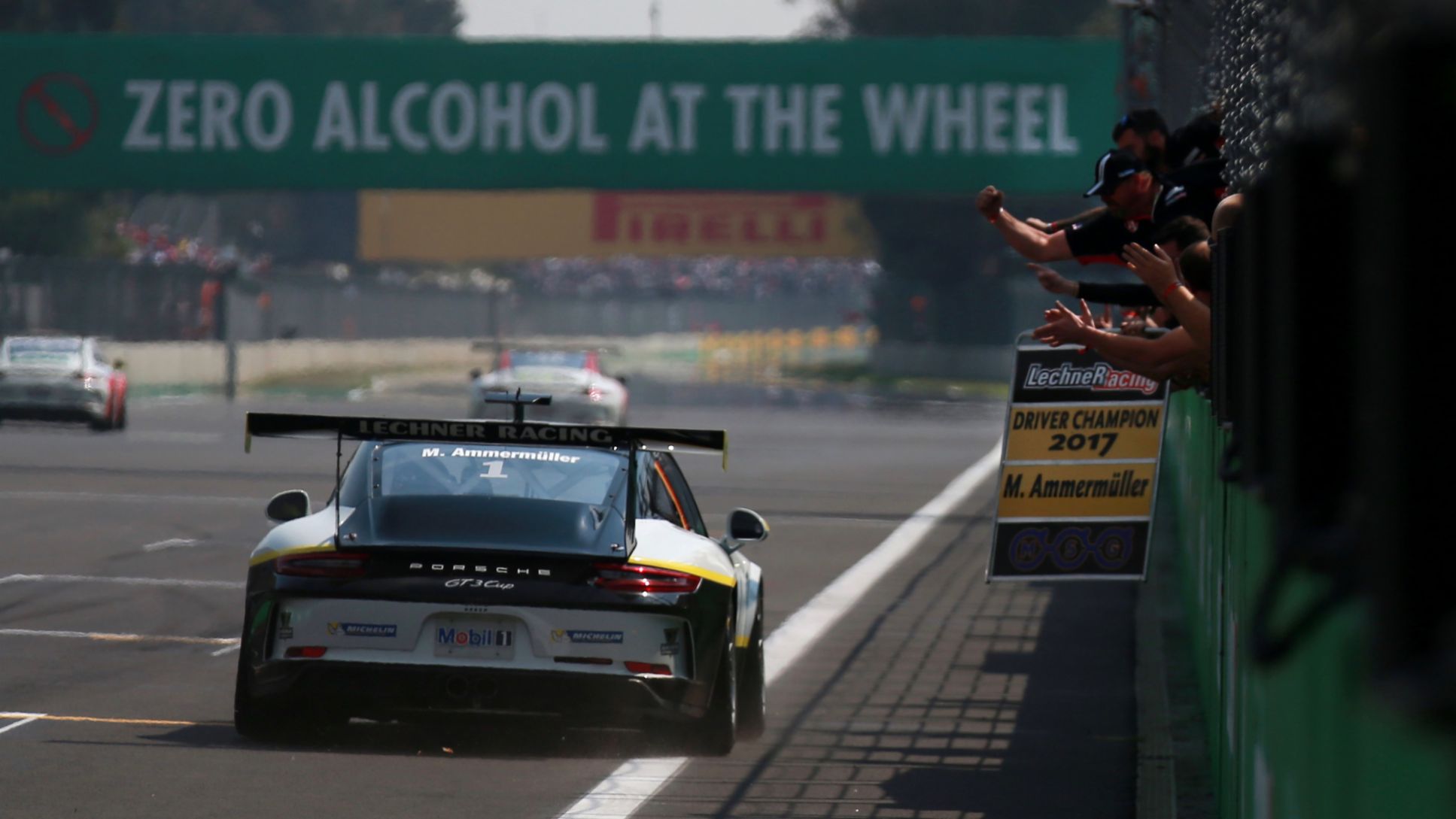 Michael Ammermüller is the new champion of the Porsche Mobil 1 Supercup. The 31-year-old German, who competed for the Lechner MSG Racing Team, has secured the championship title on Sunday at the final round held in Mexico City.

Victory at the last race of the season, however, went to Porsche Junior Matt Campbell (AUS/Fach Auto Tech) ahead of Ammermüller and Porsche Junior Dennis Olsen (N/Walter Lechner Racing Team). Second place was enough to give Ammermüller a seven-point advantage to claim the crown. “Four wins, five second places and a third – thanks to these consistent performances I was finally able to win the Supercup. I’m very pleased about that and I’m grateful for the terrific support I received from my Lechner team,” said a beaming Ammermüller.

Spectators were treated to an exciting eleventh round with 30 Porsche 911 GT3 Cup racers lining up on the Autodromo Hermanos Rodriguez. Pole-sitter Campbell made a cracking start to maintain his lead position, with Ammermüller and Olsen slotting in behind him. For the next eight laps it looked as if the Australian would easily convert his pole into victory, however Ammermüller had opted for a different tyre strategy and, at the midway mark, began to put Campbell under increased pressure. The frontrunner, however, kept his cool and brought home his second victory of the weekend after finishing first in Saturday’s race. “It’s fantastic that I managed to achieve a double victory in Mexico. What a great end of the season for me and my team! I have to say that the competition was incredible at every race this year. For me as an Australian, every racetrack was new territory and I first had to gain experience. Third overall in the championship is absolutely fine,” said Campbell, summing up his year as Porsche Junior in the Supercup. Olsen rounded off the podium next to Campbell and Ammermüller. “I did my very best in today’s race, but ultimately it wasn’t enough to take the title. It’s my first year in the Supercup and prior to the season I hadn’t imagined that I might be fighting so closely for the championship,” explained Olsen, who concluded his season as runner-up, seven points behind the champion.

For Josh Webster (Fach Auto Tech) from Great Britain and Porsche Junior Thomas Preining (Walter Lechner Racing Team) from Austria, the race concluded with positions four and five. “That was a nerve-racking race for me. I had lots of incredible duels and I kept losing places, but I managed to regain them. In the cool-down lap I looked at the grandstands packed with people. It’s truly impressive how much the Mexican people love their motor racing,” said Preining. Sixth place went to Zaid Ashkanani (MRS GT-Racing) from Kuwait, with Mattia Drudi (I/Dinamic Motorsport) taking the chequered flag in seventh. Robert Lukas (PL/Olimp Racing) secured eighth place. Thus, the top eight drivers came from eight different countries.

After eleven races run as support to the Formula 1 races, the championship titles have been awarded. Ammermüller is the 2017 champion with 193 points. The vice-championship went to Olsen with 186 points, who also took home the title as the best rookie. Campbell scored third overall with 151 points. In the B-classification for amateur drivers, Frenchman Roland Bervillé (Martinet by Almeras) won with 166 points over Egidio Perfetti (NL/MOMO-Megatron Team Partrax, 162 points) and Roar Lindland (MRS Cup-Racing, 152 points). The team championship was awarded to Lechner MSG Racing Team. In the Nations League, Germany came first (195 points) ahead of Norway (188) and Australia (159).

On Saturday, Porsche Junior Matt Campbell (AUS/Fach Auto Tech) dominated the 29-strong field on the Autodromo Hermanos Rodriguez in Mexico City and relegated Michael Ammermüller (D/Lechner MSG Racing Team) and Porsche Junior Dennis Olsen (N/Walter Lechner Racing Team) to positions two and three. “I managed to snatch the lead in the sprint to the first corner. That was the key to success. I’m taking up Sunday’s race from pole position and perhaps I can win again. My goal is to finish the season as third overall in the championship,” says the Australian. Because of the tight situation at the top, the championship is still wide open as it heads into the 11th and final round. Ammermüller leads with a five-point advantage over Olsen, and there are still 20 points up for grabs.

Olsen took up the race on the 4.304-kilometre circuit from pole position in his Porsche 911 GT3 Cup. The Norwegian, however, lost two positions in the first lap and had to settle in behind Campbell and Ammermüller in third place. Campbell grabbed his chance and pulled clear to eke out a comfortable 4.2-second advantage. When the safety car was deployed in lap six so that a vehicle could be salvaged, he lost his margin. The Australian, however, kept his cool and fended off his pursuers to retain his lead. Gripping fights for positions played out behind him, and even a second safety car phase couldn’t deter the 22-year-old from his path to victory.

Olsen made several attempts to get past Ammermüller, but found no way around the German. “I managed to extend my championship lead over Dennis in this race. That’s good. I’ll do everything I can on Sunday to stay ahead of him. Interestingly, the grid positions for tomorrow’s race are the same as our results today. Ultimately, only one thing matters for me and that’s the title,” said Ammermüller. “Even though my race didn’t go perfectly, I’m ready to fight at the finale. I’m taking up Sunday’s race from third on the grid and I’ll attack from the first second to keep my title chances alive,” declared Olsen.

Daniel Cammish (GB/Lechner MSG Racing Team) netted fourth place behind the top three, Campbell, Ammermüller, and Olsen. Frenchman Julien Andlauer (Martinet by Almeras) pulled off a surprising coup. At his maiden race in the Porsche Mobil 1 Supercup he finished on fifth place. “This race was a huge challenge for me. You have to fight from the first to the last metre if you want to come out on top. I’m really pleased with the result and I’m curious to see how I go on Sunday.” The 18-year-old is the new Porsche Junior for the 2018 Supercup season, and he receives funding to the value of 225,000 Euros from Porsche for his campaign. Andlauer, who clinched the title of the Porsche Carrera Cup France two weeks ago, triumphed at an international shootout and secured the attractive sponsorship package.

Sixth place went to the 19-year-old Porsche Junior Thomas Preining. “I lost the front lip of my car in a tussle in lap three or four. Still, I kept fighting my way through and even managed to move up to sixth place in the last lap. This earned important points in the team classification for the Walter Lechner Racing Team,” said the Austrian, who contests his third race in this year’s Porsche Mobil 1 Supercup and normally competes in the Porsche Carrera Cup Deutschland. Josh Webster (Fach Auto Tech) from Great Britain saw the flag in seventh ahead of Mikkel Overgaard Pedersen (DK/MRS GT-Racing). The best amateur pilot was Mark Radcliffe (GB/IDL Racing).