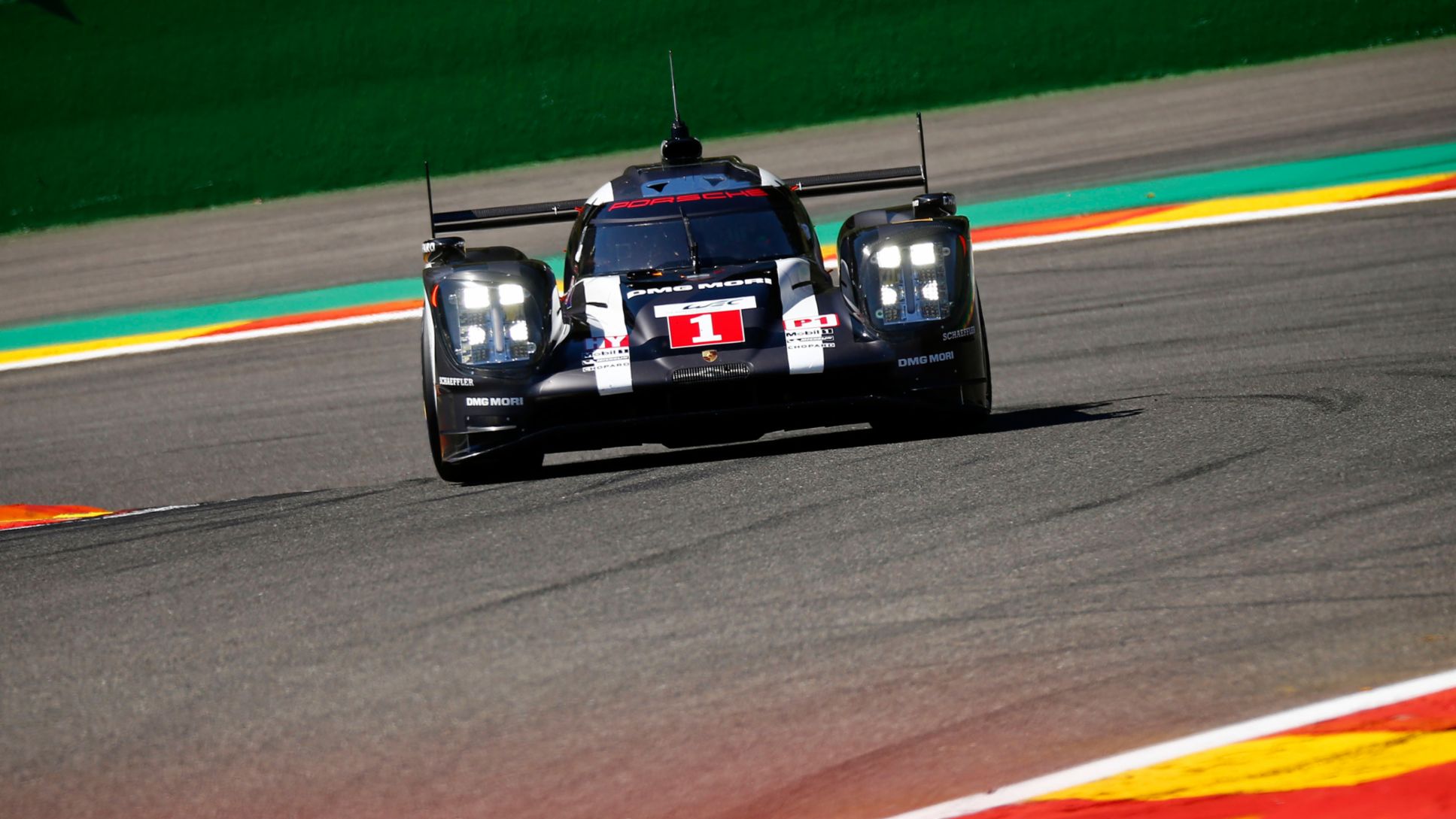 A Porsche has set the fastest lap time on the first day of practice for round two of the FIA WEC in Spa-Francorchamps. For the first time the two 919 Hybrids have run with the aerodynamic package which is designed for the Le Mans 24 Hours.

New headlights for the 919 Hybrid

Part of the Porsche 919 Hybrid’s Le Mans specification is a new headlight system, which gives the car a fresh look. The typical Porsche four-spot light design is still visible in daylight mode. Jens Maurer, Head of Systems at the Porsche Team, names the key factors: “We have managed to improve the performance regarding the range of lighting to the side as well as the reach to the front. We have saved almost 30 per cent of weight, made the fitting easier and optimised the cooling.”

The system is equipped with the latest and handpicked LEDs from Osram and features three different modes of operation: pencil beam (ultra long distance light), main beam and side beam. Twelve pairs of LEDs and reflectors per headlight unit are split into seven individually controlled strings for long distance and cornering light. The control unit is integrated into the headlights. At an angle of 45 degrees, the side light performance matches the quality of a good dipped-beam headlamp of a road going car. The flashing light is operated as a switchover between maximum and reduced operation mode of the LEDs.

In addition, each headlight has 20 of so called RGB-LEDs (RGB stands for the red-green-blue colour space) to make the two cars identifiable. The number 1 Porsche 919 Hybrid is illuminated in magenta, the number 2 car can be recognised by its blue light.

Compared to 2015, the number of LEDs has been doubled while the weight of each headlight unit was reduced by 1.1 kilograms. The new headlight is fitted as a single component now. The pre-adjustment of the reflectors inside the headlight saves the fine-tuning procedure after fitting. The cooling is from air that is channelled in from outside.

Drivers love her corners, fans enjoy the atmosphere, engineers become desperate about the layout: the Spa-Francorchamps circuit. The six-hour race on the breath-taking track in the Ardennes mountains counts as the dress rehearsal for the Le Mans 24 Hours (June 18/19). This is due to the Belgian circuit’s long full throttle sections, which are approached with low downforce. The aerodynamic configuration is key and will be a mixture between the Silverstone (high downforce) and the Le Mans specifications (minimum drag).

Brief review: At the season’s opening round in Silverstone it became clear that the class 1 Le Mans prototypes, of which the Porsche 919 Hybrid is one of them, hadn’t become any slower despite having eight per cent less fuel available per lap. The fastest race lap (Neel Jani, 1:40.303 minutes) was over half a second quicker than last year’s bench mark in the race (Audi, 1:40.836 minutes), and even nearly two seconds better than last year’s fastest race lap set by a Porsche (1:42.245 minutes).

The Porsche trio of Romain Dumas (FR), Neel Jani (CH) and Marc Lieb (DE) is currently leading the drivers’ championship and wants to defend this position, or preferably extend it. The sister car’s crew with the reigning World Champions Timo Bernhard (DE), Brendon Hartley (NZ) and Mark Webber (AU) had a solid lead of 45 seconds in Silverstone, but retired after an accident when lapping a GT car and desperately wants to catch up now.

Team principal Andreas Seidl: “It is the first race weekend during which we have our low downforce aero package on the car. It worked as expected, but we still have some set-up work ahead of us, because we are not happy with the overall balance of the cars. Our number 1 car had two smooth sessions. For the number 2 car, today was rather challenging. We had problems several times with the FIA telemetry, and had a warning from the hybrid system at the end of the first session. This is why we made a precautionary change of the high voltage battery. Generally speaking, apparently we’ve got the speed to be competitive here and also had an encouraging long run.”

The live feed over the entire six hours, including live timing and further information, is available on the FIA WEC App.

One lap at the challenging Spa-Francorchamps circuit (nicknamed the “Ardennes roller coaster”) is 7.004 kilometres long and has significant long high-speed sections. Long uphill drives require the utmost from the hybrid powertrains. The Eau Rouge corner, sitting in its depression, is awesome in the eyes of every race driver. Because of the track length in Spa, it can be that it is dry in some parts of the lap but wet in others – just like in Le Mans.

In the WEC the average of the respective best laps of two drivers counts for the grid position. In 2015 three Porsche 919 Hybrids qualified 1-2-3. Bernhard/Hartley took pole position with an average lap time of 1:54.767 minutes.

In the 2015 race, Dumas/Jani/Lieb finished second. Bernhard/Hartley/Webber dropped back due to a penalty and a technical problem, and they came third. The fastest race lap went to Brendon Hartley (1:57.972 minutes).

After one out of nine rounds, Dumas/Jani/Lieb lead the drivers’ championship standings with 25 points. Bernhard/Hartley/Webber haven’t scored yet. Having 25 points in total, Porsche ranks second in the manufacturers’ championship behind Toyota, the only manufacturer in the LMP1 category to finish the British race with two cars.

Refuelling and changing tyres may only be made sequentially, not at the same time. Only two mechanics may work simultaneously when changing tyres. That takes a lot longer than in Formula One, for example.

The Porsche 919 Hybrid has a power system that produces over 900 hp. Almost 500 hp comes from the two-litre V4 turbo petrol engine, while the e-machine, fed by the two recovery systems, delivers more than 400 hp.