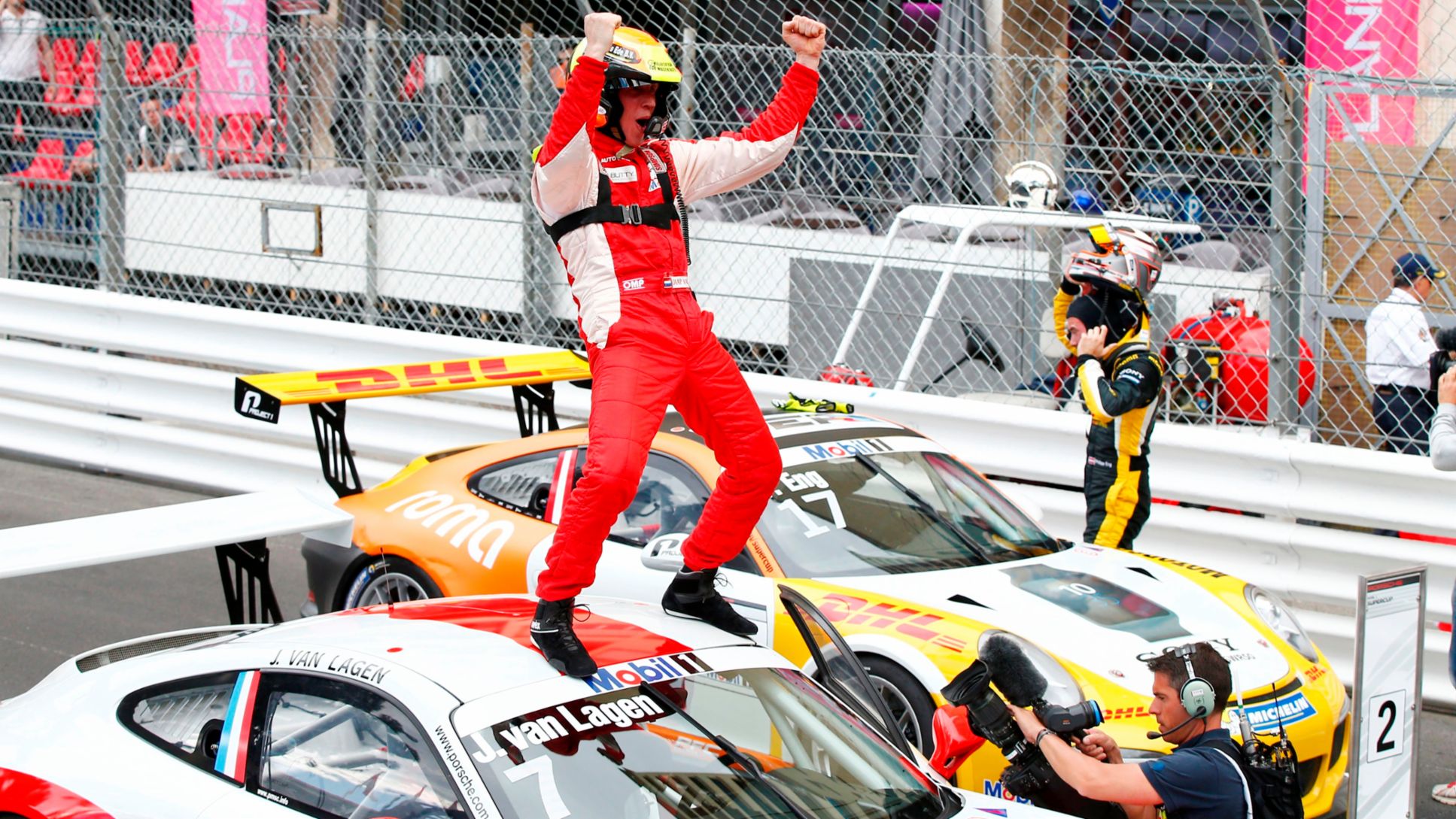 The Dutch seasoned campaigner has celebrated a lights-to-flag victory at the Porsche Mobil 1 Supercup in Monaco.

Lights-to-flag victory for Jaap van Lagen (Fach Auto Tech) at the Porsche Mobil 1 Supercup in Monaco: Putting in an immaculate drive at the wheel of his 460 hp Porsche 911 GT3 Cup, based on the lightweight 911 GT3, the Dutchman climbed to the very top of the podium in front of the royal box for this first time in his career. “I’ve won a lot of races over the years and I’ve finished on the podium twice here already, but never as the winner. This Monaco victory means a great deal to me. It’s something very special,” said an ecstatic van Lagen. The trophy for second place went to Austrian Philipp Eng (Market Leader Team by Project 1), with Britain’s Ben Barker (MOMO-Megatron Team Partrax) finishing third.

Collision with the barrier for Engelhart

Taking up the race from pole position, van Lagen refused to relinquish his advantage at the start and turned into the first corner as the leader. Eng stuck close on his bumper. Christian Engelhart (D/MRS GT-Racing), who had started from third on the grid, collided with the barrier in the first lap and lost a place to Barker. Despite sustaining damages to his car, Engelhart was able to continue in fourth place.

“That was exciting and I was pretty lucky. Right at the start, Barker suddenly appeared next to me and I tried everything to fend off his attack. But I hit the dirty side of the track and lost control of my car. I’m pleased that I could bring home fourth despite the slightly misaligned toe,” summarised Engelhart. Barker stated: “I focussed completely on the start and the first few metres and I managed to overtake Engelhard right at the beginning. Securing a podium spot at Monaco is, of course, fantastic.”

After an accident involving three vehicles occurred in lap seven, the safety car was deployed. The gap between the leading group closed up, but when the race went green again none of the pursuers managed to overtake on the snaking circuit. The order remained the same to the flag: van Lagen ahead of Eng. “To score a podium result in second in Monaco is cool. Five hours later, the Formula 1 pilots are honoured up here,” said Eng. Trailing the 25 year old over the finish line were Barker, Engelhart, Michael Ammermüller (D/Lechner Racing Middle East) and Alex Riberas (E/The Heart of Racing by Lechner).

As the best Porsche Junior, Connor de Phillippi (USA/VERVA Lechner Racing Team) planted his 911 GT3 Cup with its characteristic 3.8-litre flat-six rear engine on seventh place. “I got away cleanly at the start and was able to overtake Matteo Cairoli. Afterwards everything ran smoothly and I drove a focussed race to the flag,” explained de Phillippi. Porsche Junior and Monaco rookie Cairoli (I/Market Leader Team by Project 1) secured eighth. “I’d actually hoped for a better result from my first Monaco race so I’m not totally satisfied. Everyone tells me that to finish eighth out of 27 drivers is great, but I want to do better in the future,” exclaimed the 18 year old.

In the overall rankings, Barcelona winner Ammermüller leads with 32 points after two of eleven races. Eng is tied for points in position two, with two second places to his credit. Despite touching the guardrails in Monaco, Engelhart still managed to turn the fastest race lap, and sits third overall with 30 points.

Next race in Spielberg

The next race weekend on the Porsche Mobil 1 Supercup calendar is contested in Spielberg, Austria, from 19 to 21 June. On the rollercoaster circuit in the Styria region, situated about 70 kilometres from Graz, Philipp Eng (Market Leader Team) from Salzburg competes flying the Austrian colours. “I’ve always managed to do well in Spielberg. Last year I scored pole position there in the Supercup. This year I’d like to hear the Austrian national anthem being played,” exclaimed Eng stating his intention. Aside from Eng, the Austrian teams under Walter Lechner Senior and Walter Lechner Junior are also very much looking forward to their home race.

Points’ standings after 2 of 11 races: