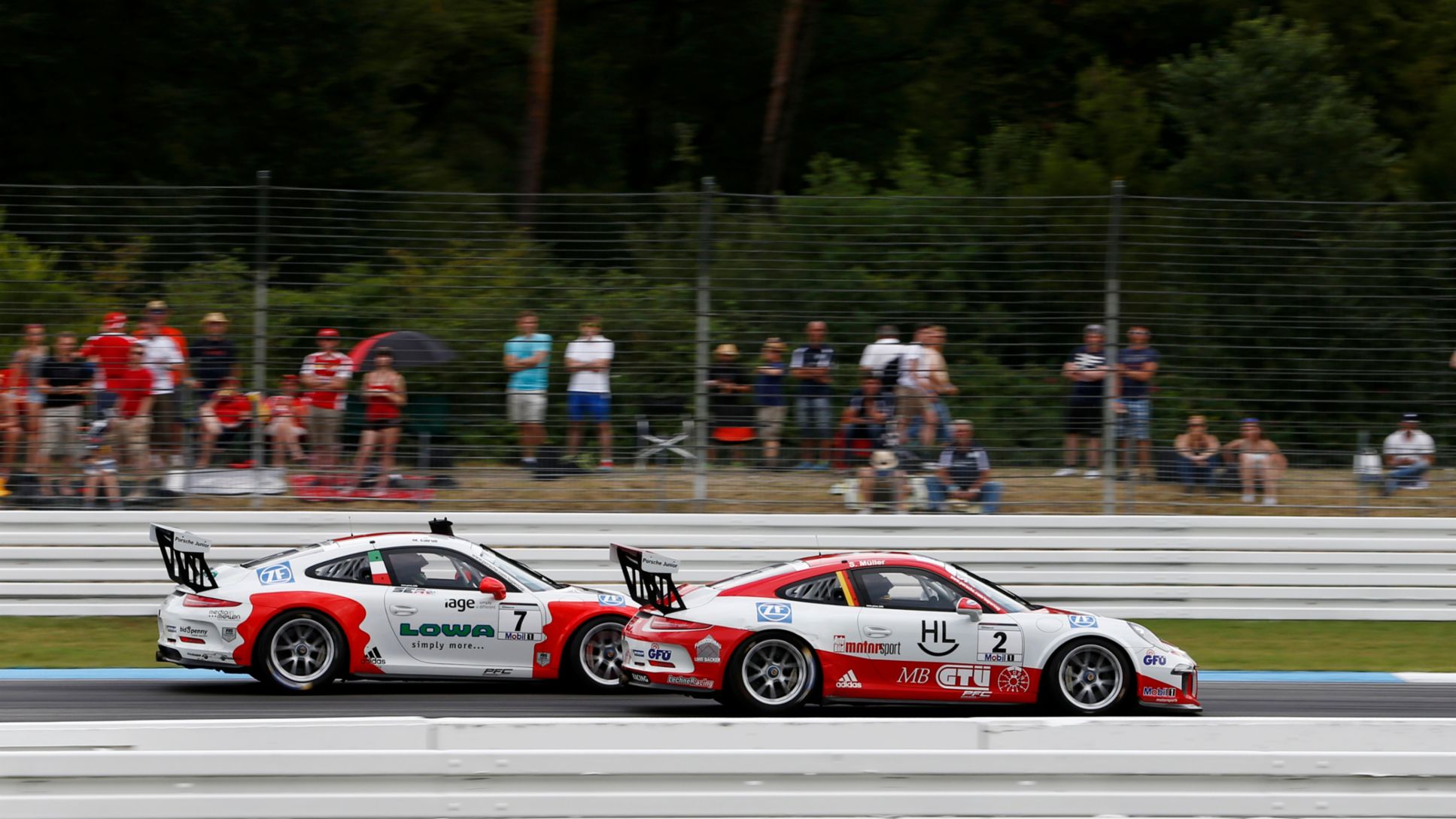 The winner of round six of the Porsche Mobil 1 Supercup has been ultimately decided two hours after the end of the Hockenheim race. Original winner Sven Müller has been handed a time penalty.

Porsche Junior Matteo Cairoli (I/Fach Auto Tech) was awarded the victory after Porsche junior Sven Müller (D/Lechner MSG Racing Team) was handed a time penalty due to a manoeuvre that did not conform to the regulations. Thus, the new classification order puts Cairoli before Müller. Jeffrey Schmidt (CH/Lechner Racing Middle East) was flagged off in third. “Of course I would rather have won on my own out on the track, but sometimes such decisions come later. I’m very pleased about my retroactive victory and the valuable championship points,” declared Cairoli.

Müller clinched pole position in the qualifying on Saturday, with Cairoli lining up alongside him on second. As the two Porsche juniors rolled on to the grid for Sunday’s race, the tension between the two title aspirants was palpable. After the lights went out, Cairoli got the jump on Müller in the first few metres. Cairoli maintained a better line with Müller’s vehicle swinging wide to the outside. When the German pulled back on the track he overtook Cairoli. This manoeuvre outside the track boundary was analysed by the Stewards of the Meeting and deemed wrongful. Müller was handed a one-second time penalty which cost him his victory. In the overall classification Müller ranks first ahead of Cairoli and Schmidt.

Cairoli made repeated attempts to get past Müller

When two backmarkers collided, the safety car was deployed briefly. After the restart, Cairoli made repeated attempts to get past Müller, but the 20-year-old Italian had no answer. “I had the feeling that I’d beat Sven at the start, but suddenly he appeared from the side. My team boss told me via radio that his move would be examined,” explained Cairoli. Müller said: “My car’s setup was good and I could turn fast laps. We’ll just have to wait and see what the final result looks like.”

The secret of Schmidt’s success was his excellent start which saw the Swiss overtake Robert Lukas (PL/Förch Racing by Lukas Motorsport). Unwavering, the 22 year old then set his sights on the third podium spot. “After the safety car phase I had a slight problem with the tyre temperature and afterwards I was out of the slipstream. Although my lap times were very good, this hampered my fight for the top,” said Schmidt. Robert Lukas (PL/Förch Racing by Lukas Motorsport) took the flag in fourth behind Schmidt, with Christian Engelhart (D/MRS GT-Racing) finishing on fifth. Supercup rookie Steven Palette (F/Martinet by Almeras) came sixth. Michael Ammermüller (D/Lechner MSG Racing Team) occupied position seven ahead of Porsche junior Mathieu Jaminet (F/Martinet by Almeras) on eighth.

Jaminet, who was relegated ten places down the starting grid after receiving a penalty from the previous Budapest race, worked his way through the field from position 13. “I managed to overtake five vehicles and bring home important points. At the next race in Spa the cards will be reshuffled and I’ll hopefully be back amongst the frontrunners,” said Jaminet.

Race seven of the Porsche Mobil 1 Supercup will be contested on the storied racetrack in Spa-Francochamps: The pilots take up the challenge in Belgium from 26 to 28 August.