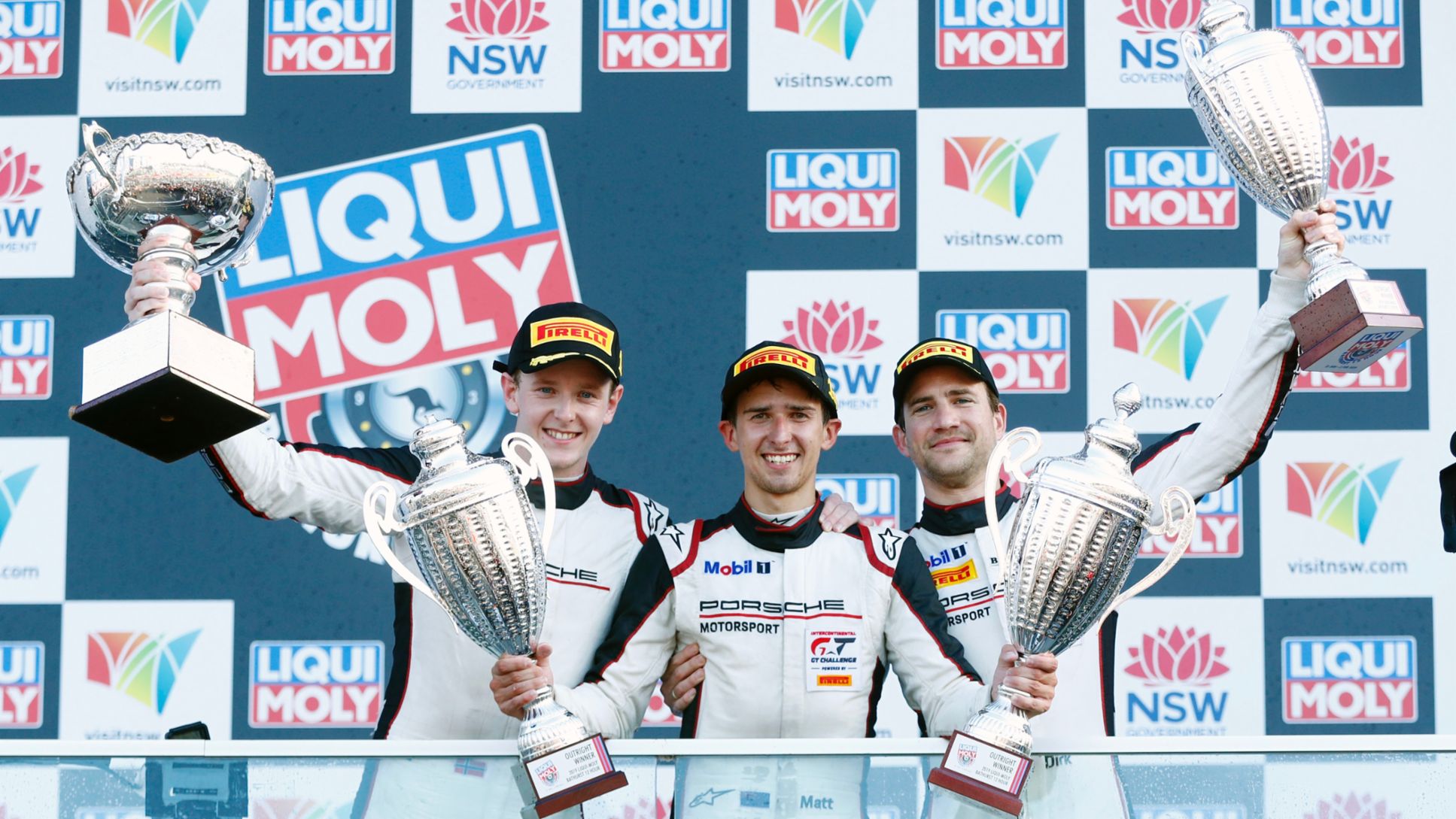 Porsche has won the Bathurst 12 Hour (Australia) for the first time, and has added another chapter to the impressive success story of the Porsche 911 GT3 R in its final performance at a major endurance race.

In a breathtaking finale on the Mount Panorama Circuit, local hero Campbell ultimately beat his top-league rivals, to the great delight of his fellow compatriots in the grandstands. In the final 20 minutes of the 12-hour endurance race, the Porsche Young Professional picked off three vehicles one after the other and with perfectly-executed manoeuvres swept into the lead with the No. 912 Porsche 911 GT3 R. His teammates, Werner and Olsen, drove strong stints and his EBM team worked flawlessly with a perfect strategy to lay the foundation for this victory.

Lady Luck, however, was not shining on their team colleagues Romain Dumas (France), Sven Müller (Germany) and Mathieu Jaminet (France). From the half-way point of the race, the driver trio in the Porsche 911 GT3 R swapped the lead with the sister vehicle over long stretches, however the No. 911 car did not see the finish. With three hours left to go, a problem with the power steering hampered the charge of the fast and consistent GT3 vehicle and forced it into the pits.

The Porsche 911 GT3 R fielded by the customer team Competition Motorsport/McElrea Racing retired after an accident of David Calvert-Jones (USA) early on in the race. Jaxon Evans gave an impressive performance at his maiden outing as a Porsche Junior. The New Zealand shared the No. 12 vehicle with works driver Kévin Estre (France) and Calvert-Jones. The identical GT3 car of the Black Swan Racing squad could not contest the race due to an accident during practice.

For the opening round of the 2019 Intercontinental GT Challenge 2019, the 2018-spec version of the ca. 500 hp GT3 car was campaigned for the final time, as stipulated by the rules. Included on the Weissach racing car’s extensive list of successes is an overall victory at the Nürburgring 24-hour race as well as titles in the ADAC GT Masters and the North American Pirelli World Challenge. From the second race of the season in Laguna Seca (USA), customer teams will again race the new version of the vehicle, which celebrated its race debut last weekend at Daytona (USA). The new Porsche 911 GT3 R features numerous improvements in terms of driveability, aerodynamics and kinematics.

In the Class B of the 12-hour race in Australia, the customer team Grove Racing scored a comfortable lights-to-flag victory. Ben Barker (Great Britain) and the father-son team Stephen and Brenton Grove (Australia) secured first place with the No. 4 Porsche 911 GT3 Cup ahead of the same model vehicle run by the Carrera Cup Asia squad.

Fritz Enzinger (Vice President Motorsport): “What a banner day for Porsche Motorsport. Congratulations to all drivers and particularly to the team principal, Earl Bamber, who has impressed me greatly with his fortitude and meticulousness over the years. Earl is not only a world-class racing driver, he’s also a top team boss. He underlined this today. It’s perfect that the fledgling EBM team has handed us the first victory at Bathurst at the swan song of the Porsche 911 GT3 R after three very successful years. Now we are looking forward to the second race of the season at Laguna Seca. We aim to bring home the next win with the new car.”

Pascal Zurlinden (Director GT Factory Motorsport): “We still had some unfinished business at Bathurst, and now it’s settled. For our proven Porsche 911 GT3 R to win at its last major race, we couldn’t have dreamed for a more wonderful finish. I take my hat off to our drivers, who had to fight in sweltering heat. And we mustn’t forget the customer team Earl Bamber Motorsport. This was the first race at this level for EBM, they tackled it with a top-class, experienced crew and promptly won. This could be the first chapter of an epic story. We look forward to further joint outings. Now we’re looking ahead and preparing ourselves for the next two big events for Porsche Motorsport: the doubleheader in Sebring with the WEC and IMSA and the next round of the IGTC in Laguna Seca.”

Sebastian Golz (Project Manager 911 GT3 R): “This finale was breathtaking. We focussed our entire race strategy on this last stint. The team prepared for it perfectly, and the drivers implemented it perfectly. At the end we fitted fresh tyres, filled the tank and put Matt Campbell in the car – then full attack to the finish line. This victory at the last big race is a fair reward for the very successful Porsche 911 GT3 R. Such a farewell before the car heads into the Museum rounds off the success story perfectly. The EBM team did a sensational job, as well. The squad was put together at short notice with unflagging commitment and great meticulousness. The fact that they promptly scored a victory is phenomenal and a consequence of the professional work.”

Porsche will tackle the 12-hour race in Bathurst from the fourth grid row. Porsche Young Professional Matt Campbell set the seventh quickest time in the Top 10 shootout on the Mount Panorama Circuit. The young Australian tapped virtually the full potential of the Porsche 911 GT3 R, which he shares with factory driver Dirk Werner (Germany) and Porsche Young Professional Dennis Olsen (Norway). Up against stiff opposition from seven other GT3 manufacturers, Campbell took just 2:03.186 minutes to lap the 6.213-kilometre racetrack in the No. 912 Porsche.

In the previous two qualifying sessions, Frenchman Mathieu Jaminet narrowly missed out on being eligible to fight for a top ten grid spot in the sister car run by the EBM (Earl Bamber Motorsport) customer team. On his hottest lap, the Porsche Young Professional was just 0.08 seconds shy of a top ten place. The No. 911 Porsche 911 GT3 R, which Jaminet shares with the works drivers Romain Dumas (France) and Sven Müller (Germany), takes up the race from twelfth on the grid. Factory driver Kévin Estre planted the identical ca. 500 hp car fielded by the Competition Motorsports/McElrea Racing customer squad on 13th place. The Frenchman is joined in the cockpit of the No.12 vehicle by Porsche Junior Jaxon Evans (New Zealand) and David Calvert-Jones (USA).

The Porsche 911 GT3 R campaigned by the North American customer team Black Swan Racing sustained irreparable damages in an accident during Friday’s free practice and is unable to take part in any further race activities. After the incident, Tim Pappas (USA), who shared the vehicle with works driver Marc Lieb (Germany) and Jeroen Bleekemolen (Netherlands), was transported to a hospital in Sydney for treatment. He suffered fractures to his right humerus and pelvis.

In the B Class, the Porsche 911 GT3 Cup run by the experienced Grove Racing squad, will tackle the endurance race from the best starting position. Britain’s Ben Barker dominated the hunt for top times against the identical cars run by the customer teams Ashley Seward Motorsport and Team Carrera Cup Asia.

The Bathurst 12 Hour gets underway on Sunday, 3 February, at 05:45 hrs local time (Saturday, 19:45 hrs CET). The race can be watched live on the Internet outside Australia on www.bathurst12hour.com.au. At the opening round of this year’s Intercontinental GT Challenge, the 2018-spec GT3 vehicle will be fielded for the last time, as stipulated by the regulations. For round two of the season at Laguna Seca (USA), contested over eight hours, customer teams will field the new Porsche 911 GT3 R, which celebrated its race debut last weekend at Daytona (USA).

Pascal Zurlinden (Director GT Factory Motorsport): “We witnessed an exciting and very close shootout. Just a quarter of a second lay between seventh and second place. I’m certain that we’re well positioned with our Porsche 911 GT3 R. Anything is possible for this car’s last outing at a major endurance race. We aim to go all-out and fight for victory.”

Sebastian Golz (Project Manager 911 GT3 R): “This is a really solid result that we certainly don’t need to hide from. We are up against strong teams and drivers here. The local guys are always particularly fast on this unique racetrack in Bathurst. Matt turned a good lap. Our starting position is absolutely fine. The pace of the car should be consistent throughout the race, and by now the fledgling EBM team is working flawlessly. We’re looking great in the twisty sections, which speaks for the Porsche’s great driveability. If we could now get some more speed on the straights then it’s bound to be a strong race.”

Earl Bamber (EBM team principal): “Our performances were good. We set our sights on getting the car into the top 10 shootout, and we succeeded. We’d secretly hoped to do a little better than seventh, but it’s okay. Our Porsche 911 GT3 R is fast, constant and comfortable to drive over the distance, and the drivers are first-class. These are key factors in a long-distance race. If we can make the most of our chances in the race, then we should be able to fight for a podium spot.”

The 12-hour race on the legendary Mount Panorama Circuit in Bathurst kicks off the 2019 season of the Intercontinental GT Challenge. Four Porsche 911 GT3 R will contest the spectacular event in Australia on the first weekend in February. Three customer teams field the successful GT3 vehicle, which will give its final farewell performance Down Under. As stipulated by the regulations, the GT3 cars must be last year’s spec. Facing stiff competition from vehicles from nine other manufacturers in the top category, the Porsche teams have good chances of success. Different this year: Instead of taking his place in the cockpit, Porsche works driver Earl Bamber (New Zealand) assumes the role of team boss at the pit wall.

The GT race was first contested on the 6.213-kilometre Mount Panorama Circuit in 1991. The circuit 200 kilometres west of Sydney consists of public roads that wind over 23 curves through the hilly countryside of New South Wales. Per lap, the vehicles must overcome an elevation difference of 174 metres. The snaking, narrow passages across the ridge of the mountain represent a stark contrast to the long straights at the foot of Mount Panorama. The racetrack poses a great challenge to drivers, engineers and teams alike. Traditionally, the 12-hour event takes off before sunrise at 5.45am, with the chequered flag dropping in the early evening before sundown.

The 911 GT3 R was designed by Porsche for worldwide GT3 series. Mounted with the ultra-modern, four-litre flat-six engine with direct fuel injection, the 368 kW (500 hp) customer sport racer celebrated its race debut in January 2016 at the Daytona 24-hour race. Since then, the racer has notched up victories in numerous international racing series, for example in the IMSA SportsCar Championship, the World Challenge, the ADAC GT Masters, and at the Nürburgring VLN long distance championship. For 2019, the model will be replaced by a new version.

The Bathurst 12 Hour takes off on Sunday, 3 February, at 5:45 hrs local time (Saturday, 19:45 hrs CET). The race can be watched live on the Internet outside Australia on www.bathurst12hour.com.au.

The 2019 Intercontinental GT Challenge calendar is made up of five endurance race on five continents. While the teams are only permitted to field 2018-spec GT3 cars at the season-opening round in Bathurst (Australia), the latest generation is allowed at the following races in Laguna Seca (USA), Spa-Francorchamps (Belgium), Suzuka (Japan) and at the season finale in Kyalami (South Africa). Porsche will not compete with a factory squad, but instead supports different customer teams in their campaign. 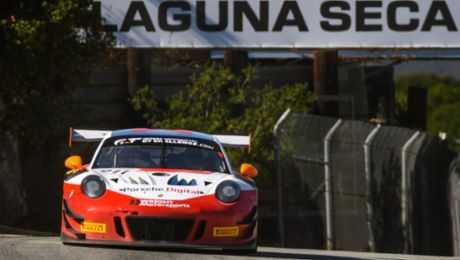 Fourth place for Porsche 911 GT3 R at the season finale

Wright Motorsports has finished on fourth place at the final round of the Intercontinental GT Challenge. 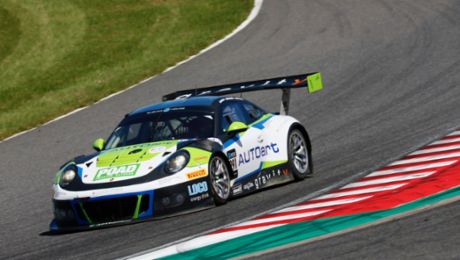 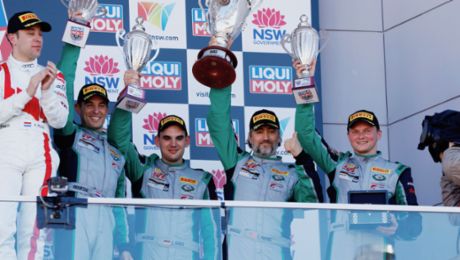 Podium for Porsche at Mount Panorama