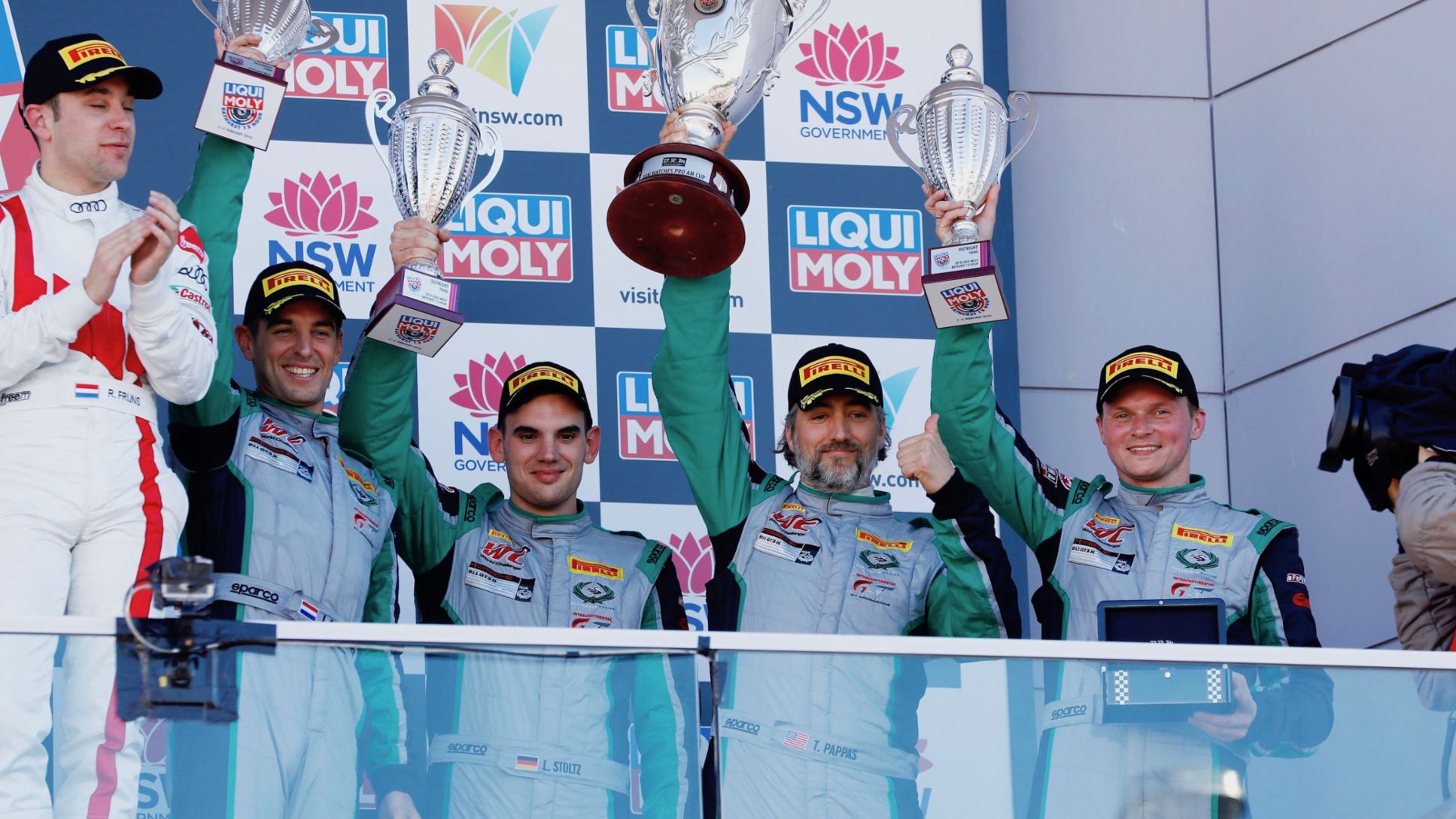 Podium and two class wins for Porsche at Mount Panorama

At the twelve-hour race on the Mount Panorama Circuit in Bathurst, the Porsche team Black Swan Racing scored third overall with the 911 GT3 R, and also won the Class A Pro-Am.

With the podium, Marc Lieb (Germany), Timothy Pappas (USA), Jeroen Bleekemolen (Netherlands) and Luca Stolz (Germany) crowned the strong performance of the four 911 GT3 R at the opening round of the Intercontinental GT Challenge, at which all finished in the top six after a gripping race against tough competition. Only the termination of the race after a serious accident shortly before the flag prevented a possible victory. Grove Motorsports secured the second class victory, with the squad taking home the Class B trophy with the 911 GT3 Cup.

The thrilling showdown of the long distance classic on the storied racetrack 200 kilometres west of Sydney was packed with drama. With 47 minutes left on the clock, Frédéric Makowiecki (France) was running in the lead in Manthey-Racing’s 911 GT3 R. The team then decided on an early pit stop, however, this strategy was foiled when the race was red-flagged. Ultimately, the Frenchman and his teammates Dirk Werner (Germany) and Romain Dumas (France) finished sixth – one position behind the world endurance champion and Le Mans winner Earl Bamber (New Zealand), who shared driving duties in the Manthey-Racing 911 GT3 R with Laurens Vanthoor (Belgium) and Kévin Estre (France). At the wheel of the 911 GT3 R fielded by Competition Motorsports, Patrick Long (USA), Porsche Young Professional Matt Campbell and his Australian compatriots David Calvert-Jones and Alex Davison crossed the finish line in fourth. Unlike the two competitors ahead of them, all 911 GT3 R racers had enough fuel on board to complete the entire race distance. The termination of the race neutralised this advantage.

The twelve-hour race in the Blue Mountains is traditionally an event for early risers. When the 49 vehicles headed off into the season-opening round of the Intercontinental GT Challenge on the tradition-steeped circuit west of Sydney, it was just 5.45 in the morning and pitch black. Nevertheless, the Porsche pilots were ready and raring to race, despite the early start and the fact that they were not able to tap into the full potential of the 911 GT3 R during the previous day’s qualifying. As such, they took up the race from far down the grid. Putting in a spirited charge, they made up lost ground from the start against stiff opposition. In the 911 GT3 R run by Competition Motorsports, the Class B winner from 2017, Patrick Long (USA) moved into the lead after four and a half hours. His teammate also continued the charge with consistently fast lap times and a perfect pit strategy. In this way, the 911 GT3 R fielded by Manthey-Racing, with drivers Romain Dumas, Dirk Werner and Frédéric Makowiecki sharing the cockpit, made up no less than 21 positions and was running fifth at half distance. With the 911 GT3 R campaigned by the American team Black Swan Racing, Marc Lieb, Timothy Pappas, Jeroen Bleekemolen and Luca Stolz worked their way from the 25th grid spot to position eight. Competing for honours in the premier A class at the Bathurst 12 Hour aside from Porsche were Audi, Bentley, BMW, Lamborghini, McLaren and Mercedes-AMG.

As the current World Challenge champion, Patrick Long was very familiar with the 911 GT3 R and hence was the first Porsche pilot to lead the field around Mount Panorama. In the second half of the race, Romain Dumas, later Matt Campbell and finally Frédéric Makowiecki took a turn at the lead. Strategically, the 911 GT3 R was prepared for all eventualities – but not for an early end to the race.

Grove Motorsports triumphed in the B Class. The cockpit of the 911 GT3 Cup was shared by Ben Barker (Great Britain), the father-son duo from Australia Stephen and Brenton Grove as well as Daniel Gaunt.

After the half-distance mark of the endurance classic at the legendary Mount Panorama Circuit in the Australian state of New South Wales, all four of the Weissach-built racers fielded by international Porsche customer teams are running amongst the top ten in the overall classification. The best-placed 911 GT3 R is the Craft Bamboo Racing entry from Hong Kong, in which Earl Bamber (New Zealand), the defending long distance world champion and two-time Le Mans winner, is currently running in third. His teammates are Laurens Vanthoor (Belgium), who ploughed from the 18th grid spot to third place in the first three hours of the race, as well as Kévin Estre (France). The 911 GT3 R was designed by Porsche Motorsport for worldwide GT3 series on the basis of the 911 GT3 RS production sports car.

At the opening round of the Intercontinental GT Challenge, which traditionally starts in darkness at 5:45am, the other 911 GT3 R have also advanced through the field. Manthey-Racing’s 911 GT3 R, driven by Romain Dumas (France), Dirk Werner (Germany) and Frédéric Makowiecki (France), has so far made up 21 positions thanks to consistent fast lap times and a perfect pit strategy and is currently lying in fifth place. In the 911 GT3 R fielded by the Australian team Competition Motorsports, Patrick Long (USA) took the lead after four and a half hours. With Porsche Young Professional Matt Campbell and his Australian compatriots David Calvert-Jones and Alex Davison, they currently rank sixth. Driving the 911 GT3 R of the American squad Black Swan Racing, Marc Lieb (Germany), Timothy Pappas (USA), Jeroen Bleekemolen (Netherlands) and Luca Stolz (Germany) sit on eighth place. Compete for honours in the premier A class at the Bathurst 12 Hour aside from Porsche are Audi, Bentley, BMW, Lamborghini, McLaren and Mercedes-AMG.

In the B class, Grove Motorsport leads the field with the 911 GT3 Cup shared by Ben Barker (Great Britain) and the Australians Stephen and Brenton Grove. Fourth place is held by the Carrera Cup Asia team with Paul Tresidder (Australia), Chris van der Drift (New Zealand) and Andrew Tang and Chen Yi-Fan from China.

Dr Frank-Steffen Walliser, Vice President Motorsport and GT Cars: “That was an extremely exciting race characterised by many safety car phases. This made it all the more astonishing that we got all four 911 GT3 R to the finish of this red-flagged race without any problems whatsoever. Four Porsche in the top six – but unfortunately not in the positions we had aimed for. Still, we can take many positives home with us from this season-opener of the Intercontinental GT Challenge. We’re not where we want to be with the pace and the qualifying results, but we can still be very happy with the efficiency and the strong team performance. We all very much hope that the driver who had the accident that led to the cancellation of the race is okay.”

Marc Lieb (911 GT3 R #540): “This race was typical of Bathurst. Lots of accidents, lots of drama. We did exactly what we set out to do, and that’s to get through without any problems and bring the car home in one piece. We succeeded. We may not have been the fastest Porsche out there, but we had a super strategy. So we’re pretty pleased. This is a huge success for the team, particularly considering that it’s their first time in Bathurst.”

Timothy Pappas (911 GT3 R #540): “That was a fantastic race. We travelled all the way from the USA and we really enjoyed Bathurst. To win the Pro-Am class and to stand on the podium in third overall is one of the biggest successes in my career. I’d like to also thank Porsche. I’m proud to be part of Porsche’s motorsport history.”

The 911 GT3 R was designed by Porsche for worldwide GT3 series on the basis of the 911 GT3 RS production sports car. Mounted with the ultra-modern, four-litre flat-six engine with direct fuel injection, the customer sports racer celebrated its race debut in January 2016 at the Daytona 24-hour race. Since then, the racer has notched up victories in numerous international racing series, for example in the IMSA SportsCar Championship, the World Challenge, the ADAC GT Masters, and at the Nürburgring VLN long distance championship on demanding Nordschleife.

The Intercontinental GT Challenge is the world’s first racing series run for GT3 vehicles. It was founded in 2016 by the SRO Motorsports Group led by Stéphane Ratel. Porsche will not compete with a factory squad, but instead supports international customer teams in their campaign with the 911 GT3 R by providing works drivers and engineers. The 2018 calendar is made up of four races on four continents.