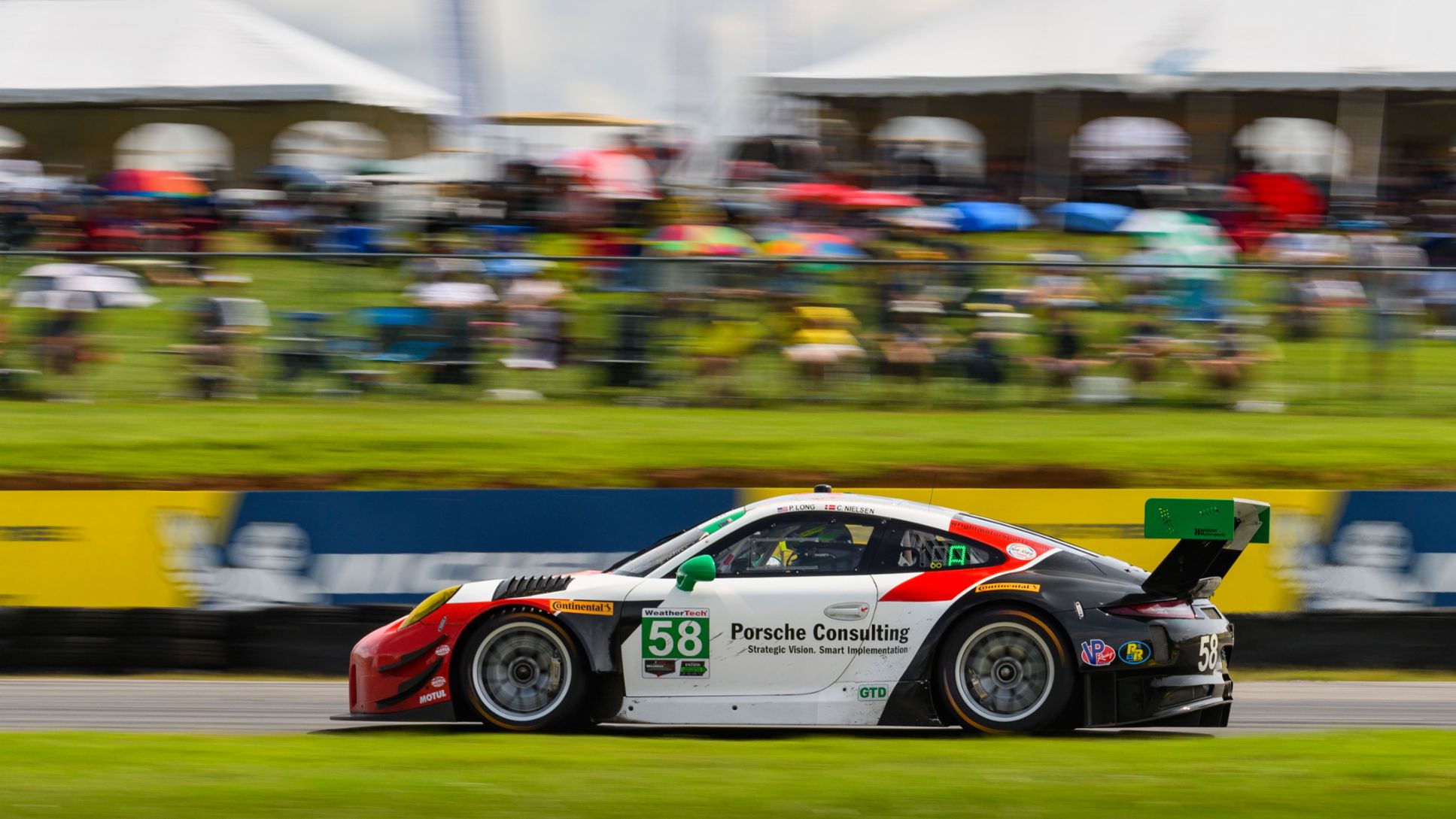 Wright Motorsports celebrated their second podium result of this year‘s IMSA SportsCar Championship on Sunday with Porsche works driver Patrick Long (USA) and Porsche Selected Driver Christina Nielsen (Denmark). After winning the Road America race with the Porsche 911 GT3 R, they followed up with another top result, scoring second in the GTD class at the Virginia International Raceway. At round nine of the GTLM class, Earl Bamber (New Zealand) and Laurens Vanthoor (Belgium) secured fifth place in the Porsche 911 RSR with the starting number 912. A technical defect after about an hour put an early end to the race for the sister car shared by Nick Tandy (Great Britain) and Patrick Pilet (France).

Although Pilet took up the race from second on the grid for the Porsche GT Team, the first grid row did not bring any luck for the number 911 vehicle. After handing the car off to Tandy, the 33-year-old had to park the car trackside with damage to the drive train while running in the lead. The 510 hp Porsche 911 RSR driven by Bamber and Vanthoor received a drive-through penalty after an incident in the first lap. In the race over two hours and 40 minutes, the pair doggedly worked their way forward from the back of the field. At times, Vanthoor looked good for a podium result on the 5.263-kilometre circuit, and ultimately saw the flag in fifth place after 88 laps. This puts Porsche on third place in the manufacturers’ classification.

Full results are available at: http://results.imsa.com

Steffen Höllwarth (Porsche Program Manager IMSA SportsCar Championship): “That was a day with more lows than highs. Our number 912 car made contact with another vehicle in the first lap, which resulted in damage to a rim and we had to pull out prematurely. On top of that, there was a drive-through penalty. In the end we finished fifth. We implemented an aggressive strategy to put the 911 amongst the frontrunners. After about an hour there was a technical defect in drive train. But it wasn’t all negative: Our strategies were great, and the team put in perfect pit stops. We’ll be back in full force at Laguna Seca.”

Earl Bamber (Porsche 911 RSR #912): “I gained a position right at the start, but then someone hit the rear of my car. We were handed a drive-through penalty and that threw us to the back of the field. Laurens then had to deal with the after-effects of the collision and couldn’t do better than fifth place.”

Laurens Vanthoor (Porsche 911 RSR #912): “Everything was okay at the start of my stint. Earl, however, was nudged in the first lap and I’m sure that’s what caused the damage. After driving for a while, the diffuser played up more and more. That was disastrous, of course, because the downforce at the rear axle got increasingly less. In the end the car was virtually undriveable and I’m pleased that we actually made it to the finish.”

Patrick Pilet (Porsche 911 RSR #911): “The engineers put a well set-up car on the track for us today. Everything came together perfectly. I drove economically to conserve fuel so that we could stay out longer. Our strategy worked perfectly, as well, because we were running at the front when we had to retire unfortunately.”

Nick Tandy (Porsche 911 RSR #911): “Obviously we’re very disappointed that we couldn’t score any points. We could have actually won, because the team implemented a terrific strategy that propelled us to the front. While I was in the lead I suddenly noticed that something was wrong and I lost power. And that was the end.”

Patrick Long (Porsche 911 GT3 R #58): “At my last pit stop I was lying eighth. I asked my team who else needed to come into the pits before us. They said: nobody. I pulled my seatbelt even tighter than usual and went for it. I’m delighted with second place. We’ve had a somewhat bumpy start to the season, but now we’re on a roll.”

Christina Nielsen (Porsche 911 GT3 R #58): “I think this circuit is the most demanding on the calendar, so second place is a very good result. Had I been a bit better at the pit stop we might have been able to fight for victory. Still, I’m very satisfied with this result.”

In the qualifying for the IMSA SportsCar Championship, the Porsche 911 RSR with the starting number 911 was driven by Patrick Pilet. On a track wet with rain, the Frenchman achieved his fastest time on the last lap. With 1:56.170 minutes, he secured position two in the close session. On Sunday, he joins forces with Nick Tandy (Great Britain) to tackle the race over two hours and 40 minutes. Earl Bamber planted the car with the starting number 912 on P8 with a time of 1:57.874 minutes. The New Zealander will drive the first stint at round nine of the championship before handing the car to his teammate Laurens Vanthoor (Belgium).

Shortly before the qualifying session on the racetrack in the US state of Virginia, the sun shone and temperatures had reached 28 degrees Celsius. However, just before the 15-minute session began at noon, a heavy rain fell. Due to persistent showers, the two 911 RSR went out on the 5.263-kilometre circuit on wet tyres. The qualifying for the GTD class, which had taken place a few minutes earlier, had started in dry conditions. Wright Motorsports opted for slicks for the Porsche 911 GT3 R and was only surprised by rain in the final laps. Porsche works driver Patrick Long (USA) claimed the sixth grid spot with a time of 1:44.758 minutes. For the race, he shares driving duties with Porsche Selected Driver Christina Nielsen (DK).

Steffen Höllwarth (Porsche Program Manager IMSA SportsCar Championship): “That was a real qualifying thriller. Just before the session a rain shower threw a spanner in the works. The conditions out on the racetrack were really difficult. We opted to go out very early and managed to move into second place in the last lap. It’s a good result for our number 911 car; with the number 912 we have to work our way up the field during the race.”

Patrick Pilet (Porsche 911 RSR #911): “When I drove into the pits before the session it started to pour. There were puddles everywhere. But only the first and last parts of the track were wet – the mid-section was dry! Ultimately my last lap was the best. When you start from second on the grid you have just one goal in mind. We want to win.”

Earl Bamber (Porsche 911 RSR #912): “Unfortunately we didn’t produce the best performance. Towards the end of the qualifying I tried to turn a faster lap and I spun. Now we have some work ahead of us. Starting from eighth on the grid we have to put together a good race strategy, otherwise it’ll be difficult to advance up the field.”

The racetrack on the North Carolina state border can look back on an eventful history: In 1971, Porsche legends Hurley Haywood and Peter Gregg won the first ever IMSA GT race there with the Porsche 914-6 GT. As a consequence of the oil crisis, the racetrack closed its gates in 1974 and reopened in the year 2000 as America’s first motorsport venue offering a wide range of recreational facilities to racing fans and their families.

The racer from Weissach, which has already notched up victories at the 12 Hours of Sebring and the Mid-Ohio race so far this season, tackles the infamously cutthroat GTLM class against strong opposition from BMW, Chevrolet and Ford. In the GTD class, Porsche’s customer team Wright Motorsports campaigns the 911 GT3 R, which recently celebrated its first win this year in the USA at Road America. The prototypes will be absent at the venerable 5.263-kilometre racetrack close to Alton in the US state of Virginia for the second time this season. This means that overall victory will go to a GT car.

The cockpit of the #911 Porsche 911 RSR is shared by Patrick Pilet (France) and Nick Tandy (Great Britain), the winners of the 12 Hours of Sebring. The Mid-Ohio winners Laurens Vanthoor (Belgium) and Earl Bamber (New Zealand) share driving duties in the second 911 RSR (#912) fielded by the Porsche GT Team. In the GTD class, the Porsche customer team Wright Motorsports competes with the 911 GT3 R. Sharing driving duties in the #58 car are the works driver Patrick Long (USA) and Porsche Selected Driver Christina Nielsen (Denmark), who recently scored their first win of the season at Road America.

For the second race season, the 911 RSR was optimised primarily in the setup. Depending on the size of the restrictor, the motor, which is positioned in front of the rear axle, puts out around 375 kW (510 hp). The particularly large rear diffuser combined with a top-mounted rear wing provides strong downforce and aerodynamic efficiency. The ca. 368kW (500 hp) 911 GT3 R was designed for worldwide GT3 series. The vehicle is campaigned by customer teams, for whom Porsche has provided an evo-kit in 2018.

The tenth and penultimate round of the IMSA SportsCar Championship will be contested from 7 to 9 September at Laguna Seca in the US state of California. 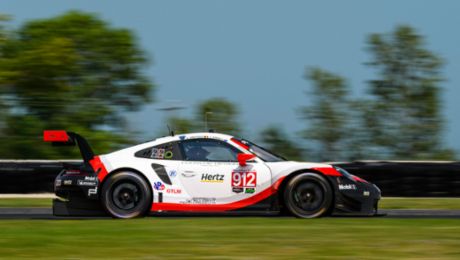 IMSA on the Road America: Victory in the GTD class

At round eight of the IMSA SportsCar Championship, the Porsche GT Team secured positions four and five. 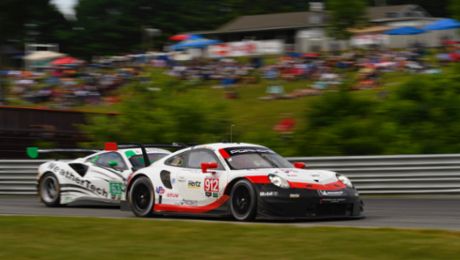 Podium for Porsche at Lime Rock Park in Lakeville

Laurens Vanthoor and Earl Bamber finished third in the GTLM class with the Porsche 911 RSR. 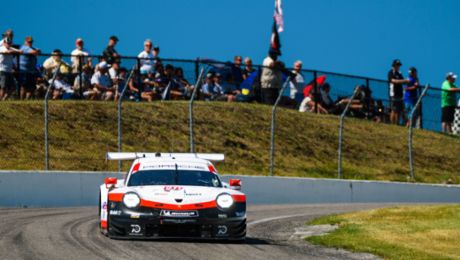 Porsche concluded round six of the IMSA in Bowmanville/Canada on positions four and six.