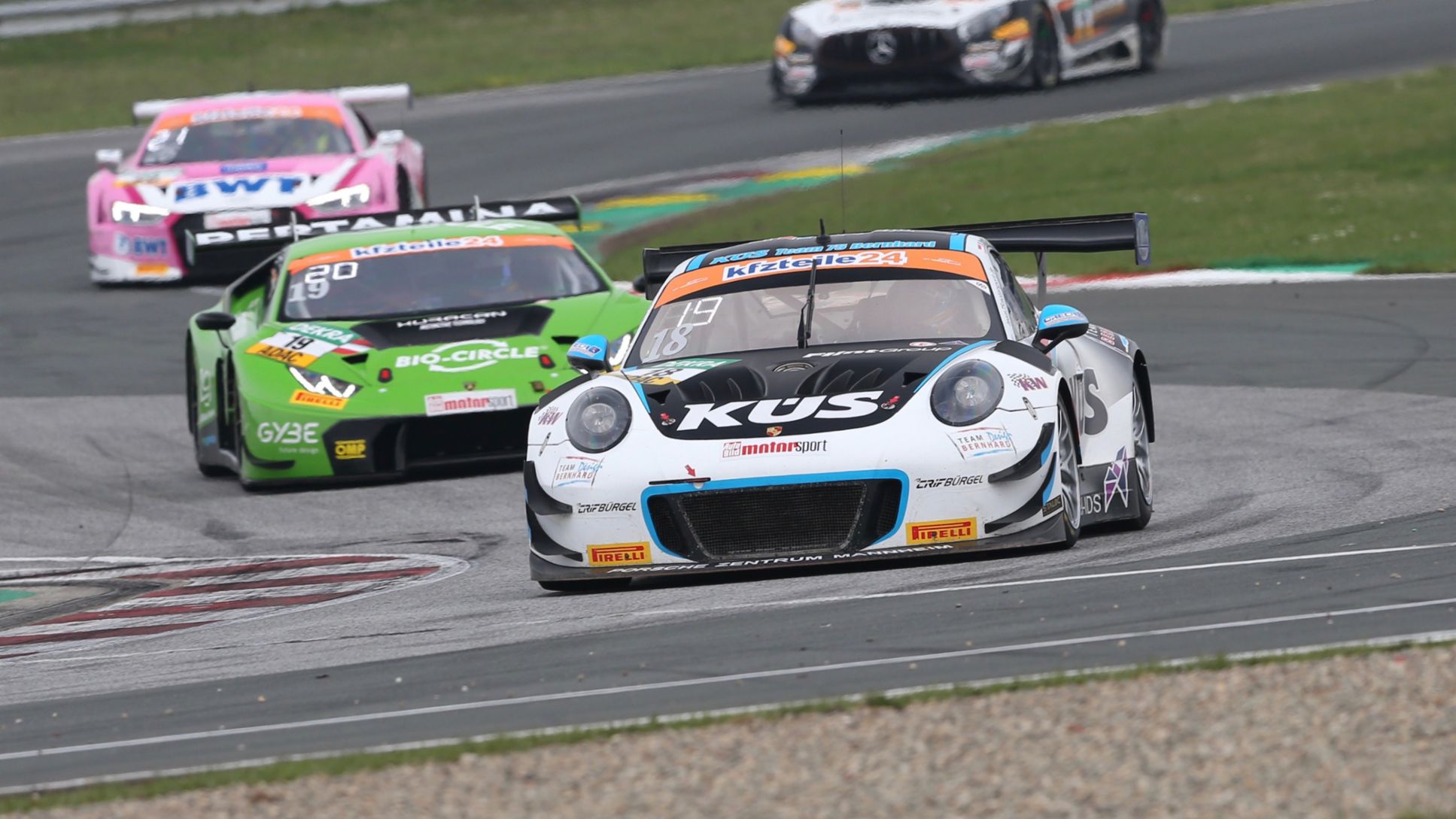 At the season-opening weekend of the ADAC GT Masters, the best Porsche 911 GT3 R scored fourth in a thrilling race on Sunday. At the first race Porsche Young Professional Mathieu Jaminet and his teammate Robert Renauer have yielded the best result of the Porsche customer teams with sixth place.

In a turbulent second race of the season with two safety car phases, the ca. 500 hp GT3 R delivered a commendable performance. The vehicle fielded by Precote Herberth Motorsport took up the race from position seven on the grid. Early on, start driver Jaminet lost four places in the initial turmoil of the 35-strong field. However the 23-year-old Frenchman gradually worked his way up the ranks to sit sixth at the half-way mark. A late pit stop earned the team fourth place, where a fierce battle for fourth broke out. When the safety car was deployed six minutes before the end of the race, the field again bunched together. However, the one final free lap was not enough to clinch a podium spot. “I had to brake hard for a collision in the first lap to avoid a serious accident and retirement. Afterwards I managed to make up several places, although it’s very difficult to overtake on this racetrack,” said Jaminet.

“We’ve learned a great deal during this weekend”

As seventh and thus the second best Porsche, the KÜS Team75 Bernhard squad earned their first championship points with the sports car world champion Bernhard and Estre. Taking up the race from twelfth on the grid, start driver Estre made good ground with his 911 GT3 R to reach position nine. In brilliant sunshine and a temperature of 17 degrees Celsius, Bernhard crossed the finish line in seventh place. “The driver line-up in our team is new so we first have to get used to each other. We’ve learned a great deal during this weekend, which we’ll take with us to the next race weekend,” explained Bernhard.

The sister car run by Team75 driven by the Belgian Adrien de Leener and Klaus Bachler from Austria finished the 60-minute race in twelfth. “We made up seven places in the race and our speed was good. At the next race weekend we need to be two to three tenths of a second faster in qualifying to make it into the top five,” said Bachler.

The black and white liveried Porsche 911 GT3 R campaigned by the IronForce by Ring Police team saw the flag in 22nd. The amateur pilot Jan-Erik Slooten and Lucas Luhr secured a spot on the podium in the special Trophy category. “Our setup was better compared to the first race, however we have a lot of work ahead of us. In race two we enjoyed some gripping and fair fights out on the track and managed to advance up to sixth place,” explained the team founder and driver Jan-Erik Slooten.

Marc Lieb, Manager of Customer Racing, said: “We witnessed a great performance from our customer teams in the second race. The hope for a podium result was there and all of our driver pairings managed to make up places in the race. The qualifying on tracks like Oschersleben plays an important role because it’s difficult to overtake. In this area, we still see a need to do better in the upcoming races and we can improve on this. Technically, everything ran smoothly over the weekend.”

Getting off the line well from 13th, Robert Renauer managed to make up four positions on the initially wet track. “After our less than perfect qualifying, we’re very pleased with the result and we managed to earn some vital points,” said the 33-year-old German. Renauer’s teammate Mathieu Jaminet (23) took the wheel of the Porsche 911 GT3 R after 20 laps and concluded the race under dry conditions on sixth place. “It was a great start to the new season. We now need to analyse the data and make the appropriate changes for Sunday’s race,” declared Jaminet, who clinched his first ADAC GT Masters victory at Oschersleben last year.

Timo Bernhard took up the race from eighth on the grid at his first race in the “super sports car league”. When the lights turned green, the 37-year-old from Bruchmühlbach-Miesau made up two places, but lost several positions after touching another vehicle. His Porsche works driver teammate Kévin Estre took the wheel after 19 laps and crossed the finish line on 14th after a spin. “The race started well but the contact and the spin cost us several positions. Our car’s performance was good and we could have finished in the top five,” said Bernhard.

The IronForce by Ring Police squad celebrated its ADAC GT Masters debut at the season-opener in Oschersleben. The German driver pairing Jan-Erik Slooten (33) and Lucas Luhr (38) concluded the race on position 24. As a bronze pilot, Slooten won the Trophy class of the race series. “It’s always difficult when you start from so far down the grid, however learning is all part of it for a fledgling team and I’m pleased that we managed to gain a few positions. Because of this, Jan-Erik won the Trophy category at the first race,” explained the former Porsche works driver, Luhr.

In the second GT3 R fielded by KÜS Team75 Bernhard, 28-year-old Adrien de Leener (B) and 26-year-old Klaus Bachler (A) finished the first race of the season on 27th out of a 35-strong field. “The car felt really good during qualifying, however the changeable weather in the afternoon resulted in our setup not working as we’d hoped. We want to find a better solution in the future because we’re aiming for the top ten,” said de Leener. For race two of the weekend, former Porsche Junior Bachler will contest the qualifying and begin the race as the start driver.

Races three and four of the ADAC GT Masters are held from 27 to 29 April at the Autodrom Most. The 4.148-kilometre circuit in the Czech Republic hosts the series for the first time. Seven race weekends in four countries make up the 2018 calendar. All races are broadcast live by the television channel SPORT1. Contesting the ADAC GT Masters alongside Porsche are Audi, BMW, Corvette, Ferrari, Honda, Lamborghini and Mercedes-AMG.