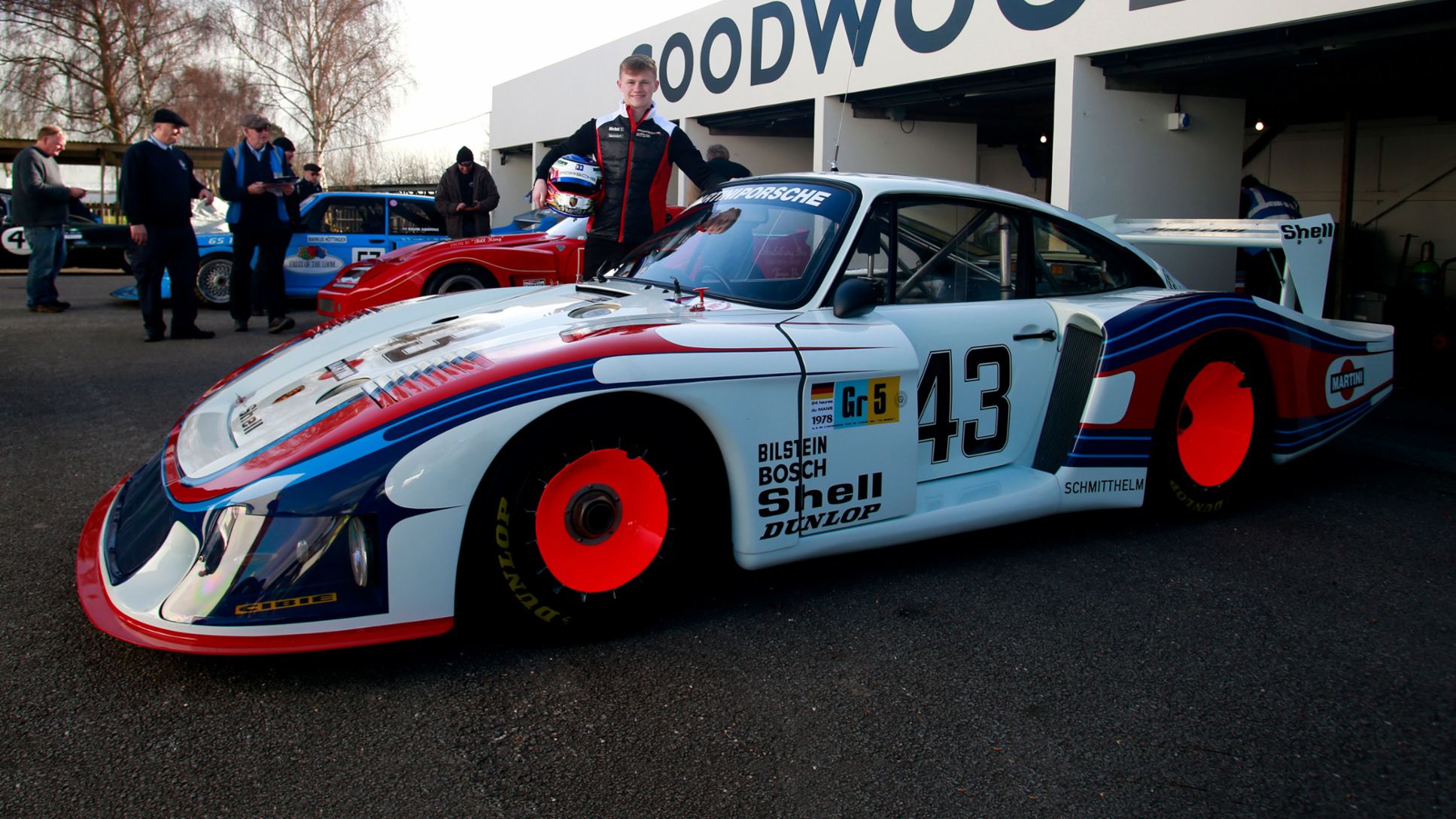 Learning your craft at the wheel of a Le Mans legend: 17 years old Dan Harper has driven the Porsche 935/78 “Moby Dick” at the 76th Goodwood Members’ Meeting.

If you were to peek inside Dan Harper’s wardrobe, hanging alongside his sponsor-laden Porsche overalls, brilliant white race boots and bespoke helmet, you might be surprised to find a well-worn blazer and a school tie. When Harper won the coveted Porsche GB Junior driver programme late last year, he was just 16 years-old and ineligible for a UK driving license. Now 17, he is about to start racing a 485bhp rear-wheel drive 911 GT3 Cup in the 2018 Carrera Cup, and is still in full time education.

We meet Porsche’s improbably busy new prodigy ahead of some demonstration laps at the 76th Goodwood Members’ Meeting. This is Dan’s first time at Goodwood, and unusually for mid-March, the temperature in southern England has plunged below freezing, with an icy wind roaring through the paddock and snow settling on the grass around the famously unforgiving 2.3-mile motor circuit.

Now, if you were 17, had only held your driving licence for three months and were about to drive round a fast, pre-safety era circuit, in the snow, in front of tens of thousands of strangers, the car you wouldn’t choose to do it in would be a low-drag 1970s Le Mans racer with more than 800bhp at the rear wheels and an insurance value of £200 million.

As the Porsche Museum technicians gradually build the revs, Moby Dick’s mighty turbocharged flat-six roars and rattles, its exhaust note reverberating around the garage. Dan is rosy-cheeked and beaming already, eager to get going and apparently free from any sort of nerves.

Perhaps this comes down to just how early in life he was exposed to racing. “My father was a rally mechanic and ran WRC cars in the Irish Tarmac Rally Championship,” Dan explains. “His workshop was at the house, so basically since I was born I’ve been around motorsport. It’s in my family’s blood. I got my first quad when I was six and since then I haven’t been out of a seat. So it all started very early, but it’s a long journey.”

Long but remarkably rapid, as the last few months have proven:

“I passed my test last December. I only turned 17 on the 8th. People took the mickey a bit while the Porsche Junior shootout programme was going as I was 16 and couldn’t drive, but it’s very cool to be able to drive a beast like a 911 GT3 at the age of 16. Not many people have done that.”

Fewer still have got behind the wheel of Moby Dick, one of Porsche’s most instantly recognisable racers, and for many as revered and important a car as the Salzburg 917K or the 919 Hybrid.

Luckily for Dan, on hand to share driving duties today is none other than Jochen Mass, the man who raced Moby Dick at Le Mans in 1978. Jochen will take the first stint, putting some much-needed heat into the tyres before handing over to Dan in an apposite pit-lane driver change.

Jochen Mass is in the car already, grinning from ear to ear to be back in the office. Mass is a veteran both of scary era F1 and some of the best days of sports car racing, having tackled Le Mans for Porsche in the 956, 962 and 936 alongside his ’78 DNF in Moby Dick.

Surrounding him are period rivals such as the Ferrari 512, Lancia Beta Montecarlo and a brace of BMW 320 Turbos. Everywhere you look there are giant front splitters, steroidal wheel arches and monumental rear wings. Exhausts pop, engines bark and the air is filled with the evocative aroma of genuinely nasty old school emissions.

When the driving gets underway it is clear Mass has lost none of his competitive edge, hurling this priceless one-off museum piece up the pit straight and into the first corner. The track is slick with oil after two full days of pre- and post-war historic racing, the short grass run-off is still covered in snow and the tyre walls ­­– well there aren't any at Goodwood.

By the time it’s Dan’s turn one car has deposited a lot more oil on track, another has spun and Porsche’s own 924 GTP has pulled off with a problem. Mass brings the car into the pits and clambers out. He says a few words to Dan before giving him a reassuring pat. It’s a bit greasy, apparently, but not too bad. Maybe take it steady for a couple of laps.

His expression now hidden behind Nomex balaclava and helmet, Dan lowers himself into the car and allows the Museum’s technicians to help him with his harness. They offer a few more words of encouragement and then slam the lightweight doors shut.

This is a far cry from the world of sequential paddle shifts and throttle-by-wire that Dan is used to. Before him is an analogue ancestry of heavy clutch, four-speed manual gearbox and unassisted steering. Behind him is around 800bhp, delivered with the sort of haymaker turbo lag most of us have only read about.

He pulls onto the grid among a half dozen privateer 935s, and as the revs begin to build the tension mounts palpably among his friends and family. The flag drops and Dan lets in the clutch, this monument to Porsche’s Group 5 glory days slithering up the pit straight as it searches for traction. It’s heart-in-mouth stuff from the side lines, so one can only imagine what’s going on in the cockpit.

In in the end, good judgement, a level head and the ability to adapt prove more than enough. “At the start I was taking it very easy,” Dan explains, “just getting a feel for it all and building up a bit of confidence. Then I started to push a bit harder and by that stage I was in the zone. By the end I was loving it and didn’t want to come in. I could’ve gone around all night.”

This is a young man in his element and in his ascendancy. We talk about the future, and there’s no limit to his ambition: “Any driver would love to experience Le Mans, so that’s something I’m living for. It’s a big goal, but it’s well within reach I think. It’s all about picking the right moments and getting the break, and for Porsche to recognise my talent now is a great feeling, and something I hope will progress.”

Dan is equally interested in the prospect of Formula E, a racing medium far less alien to him than the likes of Group 5. “I think they are going to improve every year. Most people don’t like how quiet they are but I think it’s very promising and as long as I’m in a race seat I don’t mind to be honest. Porsche are going into Formula E in 2019 and I’m sure they’re going to be as quick there as they were at Le Mans. So a possible drive there is a promising thing for me. I just have to aim as high as possible.”

There’s no doubting that he will. But in the meantime, it’s the first flight out of here, back to his native Belfast and back to school in time for the last couple of lessons before lunch. With another interesting story to tell.