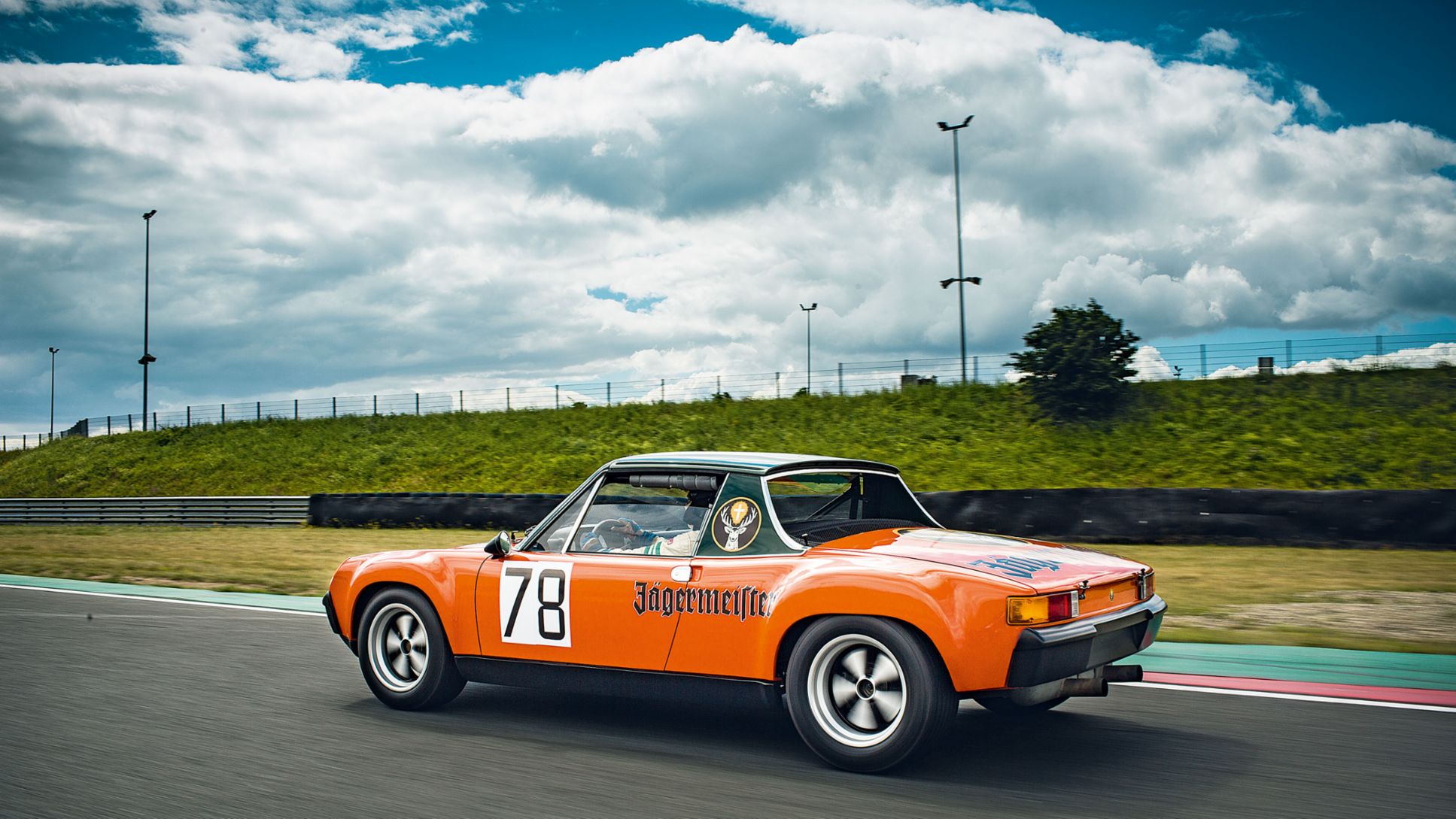 Too many times Eckhard and Oliver Schimpf had been offered Porsche cars that some resourceful mechanic had contorted into the Jägermeister. But this time the markings from the past made it certain: This Porsche 914/6 was real!

Orange: The colour chosen by the herb liqueur manufacturer from Wolfenbüttel in Lower Saxony for its racing cars from the 70s onwards. The first vehicle was actually dark green like the bottles. However, this was deemed “Not eye-catching enough,” by company boss Günter Mast after two races. It was therefore decided that a shade of orange, like that in the brand’s logo, should be applied to the body as quickly as possible. And so the 914/6 came to have a new paint finish more or less overnight. Without the Targa bar, as that made it quicker. And without the time for careful masking around the edges. As a result, some spray got through the slits in the doors and on to the A and B pillars. On the inside, the vehicle remained dark green. The main thing was to be on the starting line on time. Crazy to think of how some decisions get made and how great histories begin.

Jägermeister and racing? People who spent their childhoods in West Germany in the 70s will remember Jägermeister as an old man's drink. Rather fusty in terms of its image. And yet, the family business earned reasonably well. Initially, there was little interest in reaching a global market. The USA was a long way away. But the GIs who were returning from Germany brought this strange German schnapps with them. And the Americans turned out to have a taste for it. So why not tap into new markets? Jägermeister boss Günter Mast planned an expansion. And this was just the moment for Eckhard Schimpf, in his capacity as an ambitious amateur racing driver, respected journalist and – purely by coincidence – relative of the Mast family. Günter Mast was his cousin, although Schimpf had always financed his racing dreams by himself. With that very 914/6, this was about to change.

The Porsche 914 with vehicle identification number 914 143 0178 was to be granted a thrilling life. In 1971, the Volkswagen and Porsche dealer Max Moritz decided to convert this vehicle into a racing car. The 914/6 with its two-litre engine was brought up to 220 hp. Fitted with a roll cage and relieved of all ballast, the vehicle was soon ready for the track. The driver team of Gerd Quist and Dietrich Krumm drove some unbelievable times with it. Although they dropped out in Le Mans, in both the 1000 kilometres of Spa and the 1000 kilometres of the Nürburgring they achieved victory in the two-litre GT class. Further notable achievements were taking second place in the 500-kilometre race on the Nürburgring and third place in the Prize of Nations on the Hockenheimring. At the time, this vehicle was known as the “fastest 914/6”. And Eckhard Schimpf wanted just that for the 1972 season.

What led up to that was another story. Schimpf planned to participate in the Rallye Monte Carlo. An expensive pleasure – even at that time. At some event, Eckhard Schimpf met his cousin Günter Mast and said more or less on a whim: “If you give me some money for travel costs, I’ll gladly stick a Jägermeister logo on the car. Advertising is allowed now.” The only money his cousin had given him up to this point was for comic books he had finished reading when they were children.

From 1972 on, the entire “who’s who” drove for Jägermeister

To the astonishment of the racing driver, the liqueur boss said, “Yes”. Schimpf wanted 500 marks. But Mast said: “Better take 1000. And after the Rallye, come back and see me.” After the Rallye, Günter Mast wanted to know about other racing activities. Was this because Martini Racing was already up and running, and was good advertising for the lifestyle liqueur? Eckhard Schimpf had no idea of the plans that Günter Mast had for the brand. He wanted to turn the small, traditional company from Lower Saxony into a global player step by step. Everything came together: the right people, the right idea, the right time.

Only the Monte did not go quite as planned. Eckhard Schimpf and his co-driver Ernst-Johann Zauner broke down in the ice of Burzet. And so Schimpf went into his conversation with Günter Mast with mixed feelings. Mast, however, waved this aside. His vision was of “a whole pack of racing cars in Jägermeister colours”, which, with top drivers behind the wheel, would quickly be able to compete for victory – in all possible classes! Eckhard Schimpf would act as team leader – in an honorary capacity. And also drive himself, if he wanted to. What followed is now part of racing history: From 1972 on, practically the entire “who’s who” of the racing scene drove for Jägermeister. Graham Hill was the first, followed by legends such as “Strietzel” Stuck, Stefan Bellof, Jochi Kleint, Jacky Ickx, Niki Lauda, James Hunt, Thierry Boutsen, Klaus Ludwig and Derek Bell, to mention really just a few. At the same time as the start of its racing activities, Jägermeister also revolutionised the football Bundesliga with the then highly controversial practice of sponsoring the kit of the team Eintracht Braunschweig – including fuzzy-haired Paul Breitner. But back to the 914/6.

This remained in the hands of Eckhard Schimpf and competed in twelve races in the 1972 season, and 14 races in the 1973 season. Schimpf won a total of eight victories, one of them at the KAC race on the Südschleife (South Loop) of the Nürburgring. He took second place on the AVUS in Berlin and at the Flugplatzrennen (Airfield Race) in Diepholz. His fastest lap on the Nordschleife (North Loop) of the Nürburgring clocked in at 9:32.7 minutes. But then the 914/6 had to make way for a Porsche 911 Carrera RSR, in which Eckhard Schimpf competed approximately 80 times in the period to follow, growing into a unit rich in victories.

And the 914/6? That passed through many different hands. Delivered in payment to Max Moritz, the first purchaser was Manfred Laub from Ravensburg, who competed in races in Germany in 1974 and 1975. In 1976, there followed an interlude in Italy, and from 1977 the vehicle was driven in the USA in the IMSA series. Behind the wheel from 1977 to 1979: Rod Harrison, usual starting number 82. Then the trail went dead. Until the year 2005. By now, the Jägermeister racing team was history. The end had come in 2000. The last to drive for Jägermeister had been Eric Hélary with Opel in the DTM. Eckhard Schimpf had concluded his racing driving career back in 1982, but the team meant everything to him!

And so, together with his son Oliver, he began to research in secret what had happened to the old racing car. The idea was to reunite the old titans one by one. In secret because if it had been known that “someone from Jägermeister” was looking for the cars, the prices would have risen astronomically. Even through the Mast family was only supporting these activities privately. It had nothing to do with the company or the company assets, but who among the world’s racing car collectors would have made the distinction?

The sportscar dealer Claus Müller from Palm Beach in Florida proved to be the owner of the real 914/6, the first Jägermeister. Oliver and Eckhard Schimpf travelled to see it. In fact only scraps from the vehicle were left, but to a preserver of tradition this is unimportant. The purchase dragged on over an unbelievable seven years, before finally the momentous handshake came. The 914/6 returned home to the “fatherland” to be restored to a condition ready for the racetrack.

A restoration had to conserve as much original material as possible

The restoration experts Stimming from Bad Segeberg took the project in hand: a restoration that had to be entirely authentic. It was important to conserve as much original material as possible and not to bring missing parts into the vehicle as a traditional car restorer would do, but instead always to act with an eye to the original intended use of the vehicle and the conventions of the day. So, for example, an aluminium roll-over bar was brought back into the vehicle, even though the support on the body is not optimal. This is due to the bar and the fastening points which Max Moritz chose when constructing the vehicle.

Similarly, the old screws were retained as far as possible. As a result there are still slotted screws in the retaining bracket for the windscreen, where today screws with a hexagon head would perhaps be chosen. And the more basic state of racing can also be seen from the plastic components like the hoods or bumpers. The paint finish is created exactly as it was applied in 1972. Including the spray, and even the starting numbers are stuck on slightly askew, as at that time nobody gave much thought to the exact positioning of a sticker. The floor of the passenger compartment is entirely untouched. It bears the traces of its long racing life with pride.

A pack of racing cars from a glorious period

But now, after so much history, pleasant anecdotes and devoted restoration work, it is time for a racing lap. Eckhard Schimpf climbs into the vehicle he last drove in 1973. His racing suit is genuine, as are his feeling for the vehicle. He has no problems with the reversed gears with their long paths, or with the hot engine, which requires a considerable degree of feeling. The 914/6 starts up eagerly and gives a loud roar, although by no means too loud.

The first laps after such a long time are cautious. But the racing genes soon make themselves known. The 914/6 with its old master at the wheel cuts pretty close to the ideal line on the Oschersleben racetrack as it sprints, glides and brakes. Perfect weather, a light wind, only the asphalt is a little too cool. But it doesn’t matter. Everything is there again at once. The first Jägermeister is back. As are over ten other racing cars in orange. A pack of racing cars from a glorious period.

On the 50th anniversary of Gerhard Mitter's death, we take a look back at his successes. 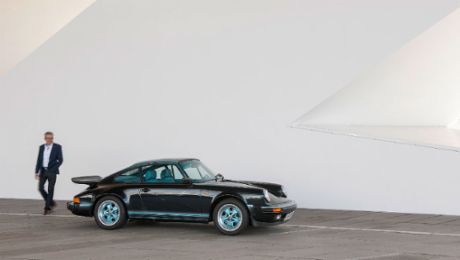 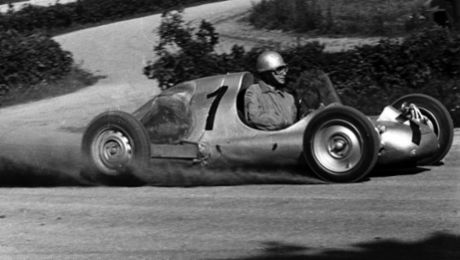 A very special race car: Otto Mathé and his Fetzenflieger

Otto Mathé celebrated many successes at the wheel of his self-built car that has a Porsche factory racing engine.