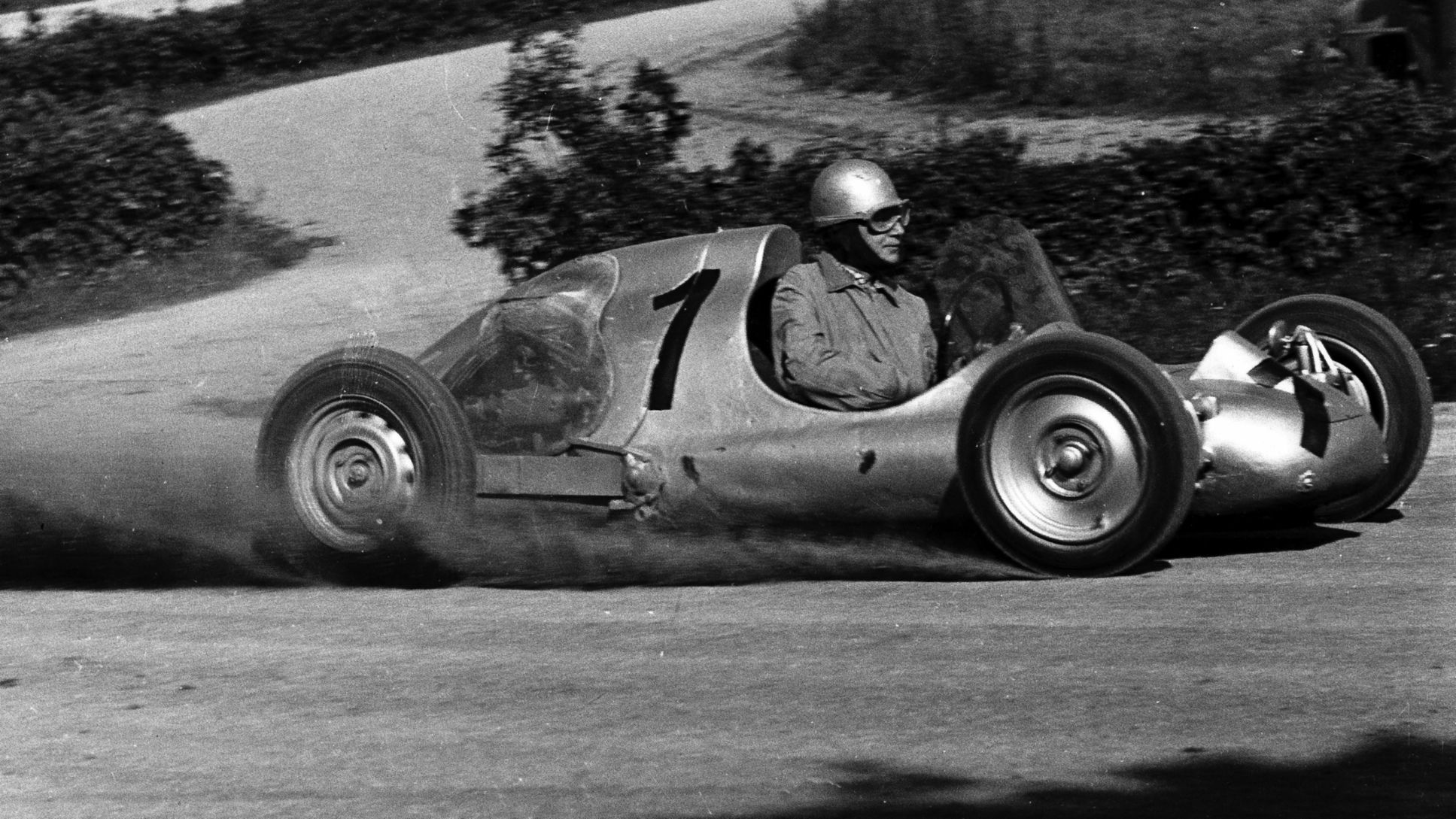 An extraordinary nickname for an exceptional vehicle: Despite his physical disability, Austrian driver Otto Mathé celebrated many successes at the wheel of his self-built car that has a Porsche factory racing engine.

Austrian-born Otto Mathé is left with one functional arm after a motorcycle accident during a race in September 1934 results in his right arm being paralysed below the elbow. Not that it stops him from continuing to actively participate in motorsport – quite the opposite. Mathé takes a “double or nothing” approach and switches to four wheels. Giving up is never a possibility, and from that point his passion for cars is wholly dedicated to Porsche. In the mid-1950s he becomes increasingly well known for arriving at his favourite racetracks with a rather unusual vehicle: the “Fetzenflieger.”

Though combining Volkswagen components with Porsche engine-performance technically makes the Monoposto a Formula 2 car, Mathé always keeps available a set of bolt-on mudguards, lighting, a second seat and a spare wheel, so in next to no time his contraption is ready to compete in other racing series where needed. With the gear lever installed on the left – the side of his still-functional hand – he leans against the steering wheel to change gear: a posture that makes the Austrian world-famous. And in spite of his physical disability, Mathè regularly outclasses the competition, leaving even the keenest drivers in his dust.

The peculiar Porsche turbocharges Otto Mathé’s career. The self-built racing car, with hand-crafted aluminium skin accommodating a 1.5-litre factory racing engine (Spyder), and later a Fuhrmann engine from the 356 A Carrera GT, is certainly one of the most unusual Porsche racing cars ever seen. Its extremely low centre of gravity, short wheelbase, and engine installed in front of the rear axle result in extraordinary driving characteristics, while a kerb weight of just 395 kilograms and 130 PS enable acceleration to more than 200 km/h. But it’s not just for those qualities that the bizarre nickname of “Fetzenflieger” – or “shreds flyer” – is coined for the car.

Mathé leaves the side panelling open in order to facilitate quicker changing of the spark plugs when needed. All that protects the carburettors from incoming dirt are two overlapping fabric tarpaulins, which also function as air filters, and occasionally misfires ignite the fabric, and the speeding vehicle leaves flaming fragments on the track behind it.

The Fetzenflieger was primarily used in sand track racing and ice races; an example of the latter is the legendary race commemorating Dr. h.c. Ferdinand Porsche in Zell am See. Otto Mathé sets a record time there in 1956, completing the four-kilometre icy course in just 157 seconds – leaving Porsche PR boss and racing driver Huschke von Hanstein and Richard von Frankenberg trailing. On that day, around 3,000 motorsport fans are captivated by the Fetzenflieger at the foot of the Großglockner.

The 9:11 magazine has unearthed rare footage of the Fetzenflieger: