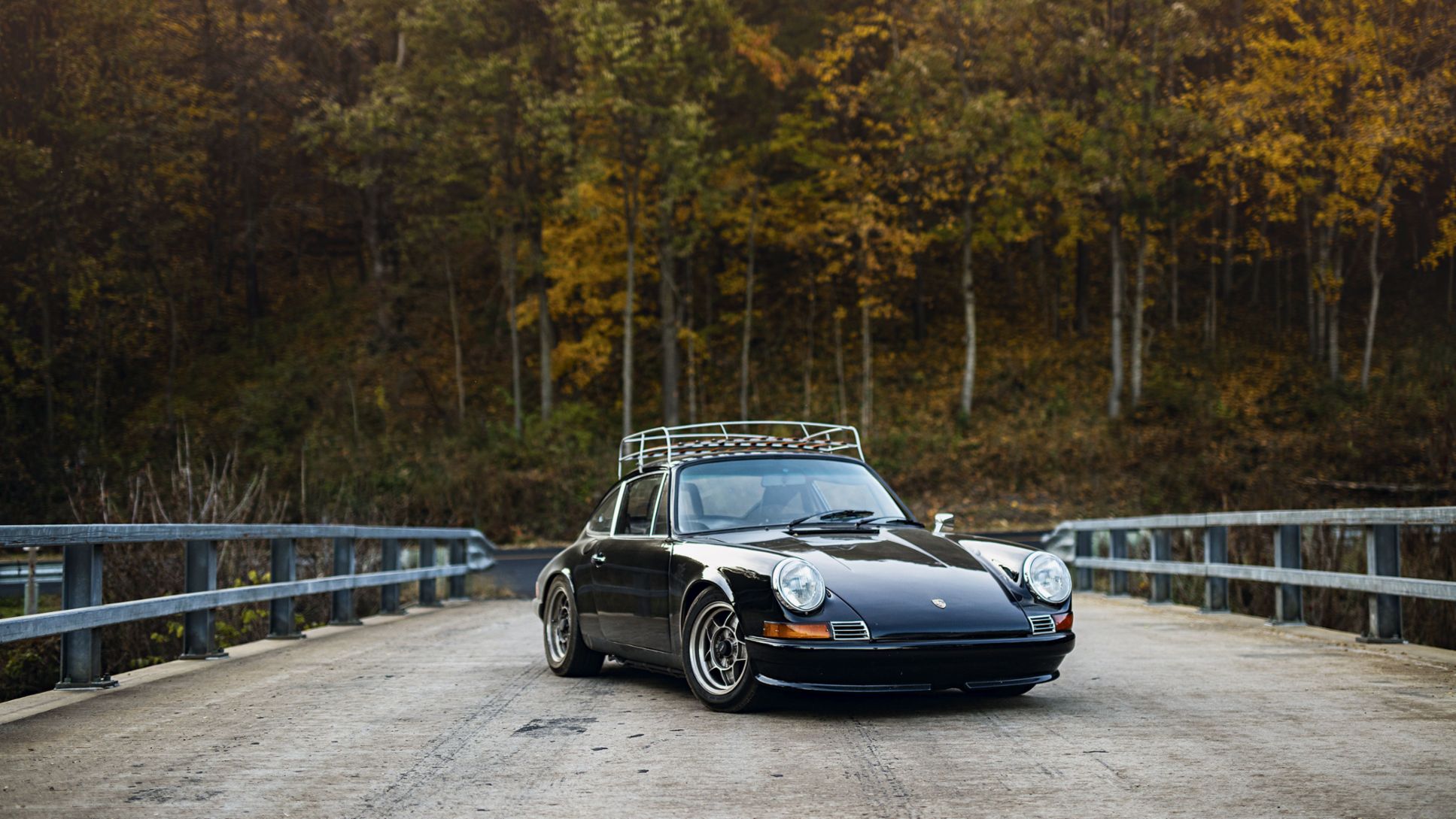 Kris Clewell never set out to be a trend setter; he was just doing what felt right to him. The Minnesotan in his mid-thirties opted to restore his 1972 911 T in a revolutionary new way – by going back to basics, allowing him to focus first and foremost on driving and enjoying his classic car.

The scene in Minnesota could have been lifted straight from the Coen brothers’ cult film “Fargo”. It’s snowy, expansive and lonely. Empty. The only difference is the lack of dead bodies. When the door to the garage suddenly lifts, Kris Clewell quickly ushers us into the large interior. “Hi guys. I’m freezing”. It seems that Minnesotans are people of few words – and people who wear T-shirts even in the bitter mid-western winter.

“You should have come by in summer, then we could have gone on a real drive”, says Kris, nodding towards the 1972 911 T behind him. He dons a thick down jacket, and we carefully push the car out of the garage and onto the snow. Kris starts the 3.2 litre engine. It splutters into life, its sound becoming deeper and fuller as it warms up. Kris revs the engine, producing an incredible vintage sound. That’s the reason we're here.

“My childhood dream was always to own an air-cooled 911”, explains the 35-year-old father of two young daughters. “It remained nothing more than a dream for many years”. But in summer 2011, the dream finally came true. In the south of the US state of Arkansas, 1,500 kilometres from home, Kris thought he had found his perfect car: a white Porsche 911 SC from model year 1983.

“I decided to just go for it, without seeing the car in the flesh”

Together with friend and mechanic Aaron Hatz from Flat Six Inc., a workshop specialising in Porsche, Kris restored the SC. “But when it was finished”, continues Kris, who earns a living as a photographer and automotive journalist, “I suddenly found that I didn’t like it any more”. The car looked far too perfect. No patina. Only original parts. A flawless painted finish. “I didn’t want a replica”, says Kris. He wanted a car that you could drive, feel and experience – not an investment piece that would be left to gather dust in a garage. “When I saw the car in front of me, I was genuinely scared of damaging this pure white representation of everything I had dreamt of”. He put the car up for sale and started his search for a new 911. It didn’t take long:

Online searches led Kris to a 1972 911 T in Virginia, in dire need of an overhaul. “It looked awful”, says Kris. “But for 22,000 dollars I decided to just go for it, without seeing the car in the flesh”. You could call it intuition – maybe even love? “I just knew that one day, I’d manage to get this car looking great”.

The 911 T had been through a few owners and had suffered a fair few cosmetic catastrophes: The original Albert Blue paint had been coated in black. One of the previous owners had added an ugly spoiler, and the website indicated that the 911 had seen some rather extensive modification – apparently with the aim of making it look more like a highly desirable Carrera RS model.

All seemed to like the car’s raw, imperfect look

Kris, who has never liked cars masquerading as something they’re not, was horrified. The retrofitted RS components were the first to go. On the 18-hour journey home to Minnesota, Kris stopped off at a friend’s workshop and had the vinyl cladding removed from the 911's side panels. Once home, he swiftly got rid of the non-original ducktail rear spoiler, leaving some unsightly holes in the tailgate.

Kris pored over the classifieds, and eventually found a replacement tailgate which, after a failed paint job (“My wife suggested baby blue”) and subsequent attempts to put the damage right, was an uneven shade of the original red, with hints of patina, filler and bare steel showing through. Kris didn’t care; all he wanted to do was drive his 911.

Although his decision had been purely pragmatic, the black 911 with a red tailgate received an unexpectedly positive reception. Petrol station attendants, drivers in the next lane and dads in the shopping centre car park all seemed to like the car’s raw, imperfect look and the bold, unusual accent of the red tailgate on the otherwise black car. People appreciated the unique stamp that Kris Clewell had put on his 911 completely by accident.

His main motivation: The miles of enjoyment

“I really didn’t give it that much thought initially. But the red tailgate was my way of saying ‘Screw you’ to all the Porsche purists”, says Kris. “My car doesn’t and will never appeal to those people. But that’s fine with me. I’m happy there are people who like my car just the way it is”. Kris was pleased that people had commented on the unique finish of his 911. The sound coming from the M&K RSR exhaust was perfect, and the car drove well. It was time to take his older daughter Irene – who had just turned two – out for a spin. Everything was going well – until the car engine suddenly cut out at 7,000 revs. Clewell’s heart began to race. Had he caused long-term damage to the engine? Was this the end for his car?

Back home in his garage, Kris carefully removed a valve cap, and fragments of a fractured rocker arm fell to the floor. Oh no! Would a relatively simple engine head repair be enough to enable him to once again enjoy carefree drives on his favourite roads? Or would that be it forever?

After spending countless hours restoring the engine to the manufacturer specification on his previous Porsche, only to discover that the results were not worth the effort, Kris – who had been learning the art of “tinkering” with cars at his grandfather’s side since childhood – opened his toolbox and immersed himself in the task at hand, determined to do things his way. His first job was to build a new stainless steel work bench to provide a clean surface on which to systematically dismantle the engine block. Kris cleaned all the components thoroughly using Scotch-Brite pads, then gave each part a coating of yellow zinc. In spite of his careful preparations, components installed in the wrong places slowed his progress. The reassembly was more laborious than expected, pushing Kris’ nerves to the limit – but he refused to give up, learning every step of the way. His main motivation? The miles of enjoyment behind the wheel that he had originally envisaged.

“I’m not interested in keeping the car looking nice”

During his performance-focused engine overhaul, Kris drew on the support of the company Engine Builder Supply and his friend Aaron from Flat Six: JE pistons and a new set of drilled cylinders resulted in a new compression ratio of 9.8:1. Kris also installed suitable new valve springs and cams. And then one day, the 3.2 litre engine was finally ready. Back in the car, it received its first injection of fuel. The long wait had paid off: The engine roared powerfully to life.

Before we leave Kris in the depths of the Minnesotan winter, we ask if he realises that his approach has actually been the start of a new trend in automotive restoration. “Oh”, he says dismissively. “I’m not so sure about that. I just wanted to do my own thing, and above all else, I wanted to use the car. And I now drive it a lot”. Over the summer alone, he drove almost 5,000 miles in the 911, taking it out almost daily. “I’m not interested in keeping the car looking nice. I don’t wash it very often. If lots of other people like that, then that’s great. I think that owners of old Porsches should actually drive them a lot more often”.