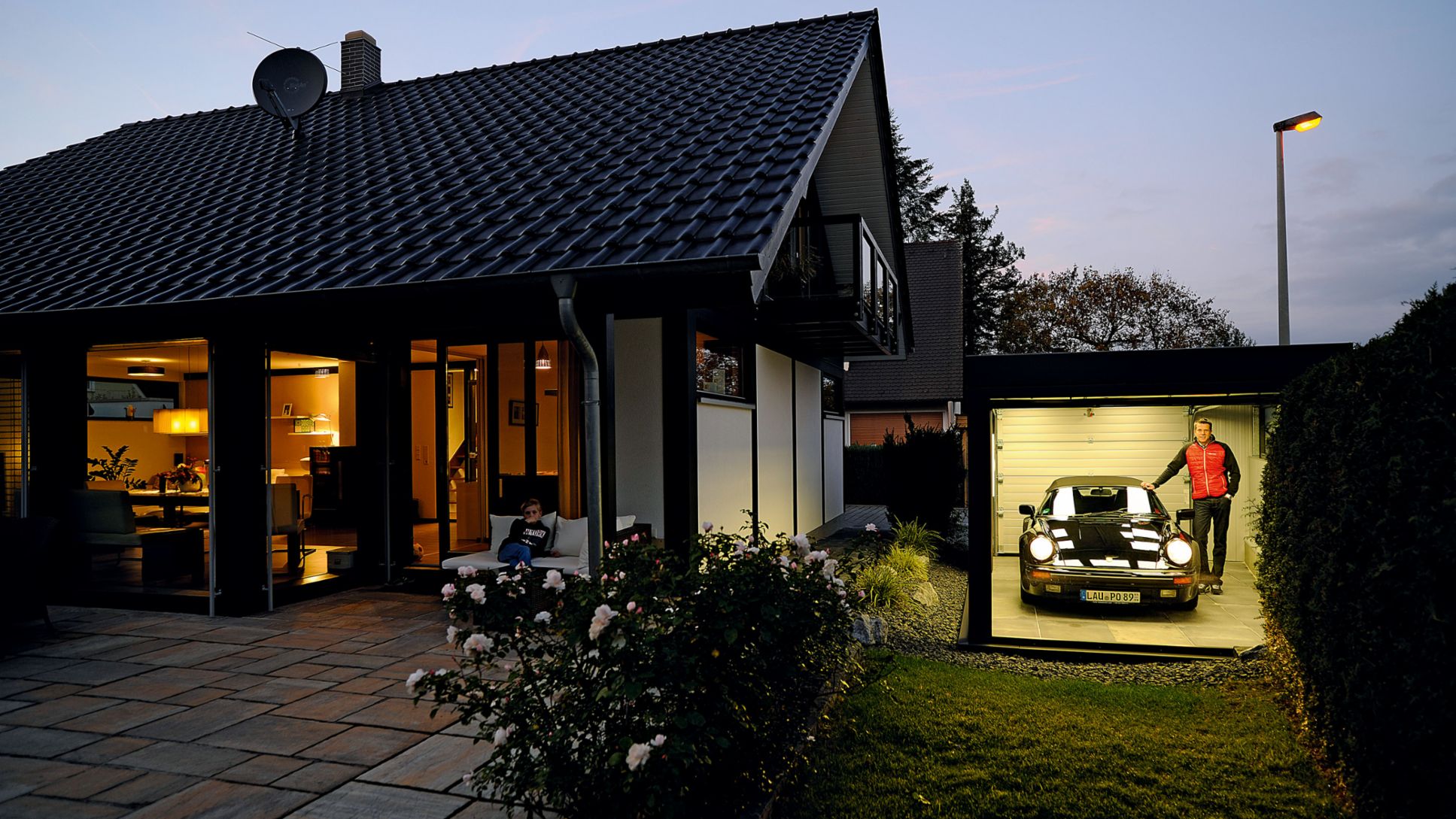 With the 1989 G-model Speedster, Andreas Kümmel has made his father’s dream live on. In true style in a very particular garage, which was designed around the Porsche.

A garage which does not look like a garage. Not visible from the pavement, but with a great view from the sofa. Conical on the outside, logical on the inside. The list of specifications was long and the Porsche to fit the garage was already waiting. That could only mean one of two things: Either Andreas Kümmel’s dreams would go unfulfilled– or he has an architect with plenty of patience among his friends.

His friends call him Atze, Monika says darling, and to Max he is Papa. His neighbour simply calls him crazy. Andreas Kümmel is 46 years old and is thrilled that people consider him crazy about cars. That tends to happen automatically; when you visit him at home in Rückersdorf near Nuremberg in Central Franconia, you understand why. Kümmel is a securities manager in the wealth management department of a large bank. A banker through and through, shortly after completing his training to become a bank clerk he was able to afford a Mazda MX5 using his stock profits. A roadster gained through speculation, NA model, the one with hidden headlights. Even today he still sheds a tear for it, but that is another story.

He had always been fascinated by the sound of the Beetle

At the age of 14, the erstwhile Steiner school pupil tested his driving skills for the first time – behind the wheel of a Beetle. He had always been fascinated by the sound. The testing ground for his first driving attempts was a field. That’s how things were then in Heiningen, at the foot of the Swabian Alps. “I got stuck in the mud and had to ask my neighbour for help, how embarrassing,” he explains, laughing at the thought of the good old days when he still thought it was normal to grow up in nature surrounded by fields and meadows. It was not until much later that he realised how privileged and loving his childhood had been, with his cat Kasimir and two pygmy goats.

He doesn’t have to worry about hiding the car keys from son Max; the ten-year-old prefers playing football, as he explains upon arriving home with a red face and shin pads on. “For me at that age it was different. Even as a little lad, I was staring after every Porsche,” says Kümmel, whose father, a PhD in Economics, long ago picked him up from hospital in a Porsche 356. “Papa took early retirement in 1989 and wanted to buy himself a Porsche Speedster,” he continues. But Kümmel Senior did not do this, as his wife was of the opinion: “An old dog like you has no need to go buying a Speedster anymore!”

Many years later, the dollar exchange rate was good, and then came this: “I discovered two Porsche cars in the USA and had them checked out by a friend of mine from university, Thomas Illner, who worked at Porsche – unfortunately neither of them was in a great condition. We carried on researching together until at last we found a 993 from 1998. A US model in Arctic Silver Metallic. I then transferred the money to the USA more or less blind, without having seen the car beforehand. I had to endure weeks of nervous waiting until my first Porsche arrived in Bremerhaven.” On the journey from Bremerhaven back to Central Franconia, the banker was really kicking himself: “I could hear funny noises and rang my mate Thomas in a panic. He told me, cool as anything: ‘Atze, that’s the spoiler, it makes noises as it extends and retracts.’”

One thing stuck with the Franconian, even after buying the 993: “My father had a great wish in his life which remained unfulfilled. I couldn’t let that lie,” he thought almost four years ago, and combed through the Internet for a Speedster, which just a short time later would become his second Porsche. Registration date July 1989, 11,700 miles, 218 hp (because a catalytic converter was compulsory in the USA – in Germany the model came with 231 hp without a catalytic converter), colour: triple black. “To the best of my knowledge there were only 80 cars produced in this colour for the USA.”

And there it is, the twinkle in his eye, which remains the whole time he talks about his Speedster. Just a few weeks after the purchase, he developed a crazy idea: “I want to be able to see my car from the sofa.” How convenient, then, that his friend Volker Kreuzpointner is an architect. Together, the two of them diligently worked on designing a garage around the car, as it were. The single requirement: a garage that does not look like a garage. To give an initial idea of the scale of project, the house was built more quickly than the garage. It had to be conically tapered, have panels to drive on (not a standard foundation), special lighting, frosted glass panels to the street, as few pillars as possible.

Kümmel’s wish list was a long one. But his circle of friends was fortunately large, and so he got a recommendation, for example, for a monumental mason who could cut the floor panels – one weighing in at around 130 kilograms. His close family network also includes a stage and lighting designer, his brother-in-law Jo Schramm, who has worked in a wide variety of European theatres. He was tasked with building remote control light panels in such a way that no shadows or light refraction would disturb the beauty of the Porsche.

“Only a few neighbours know that this artwork out there is a garage. Some think I have a sauna in there,” explains the proud Porsche owner. “Sometimes I drive the 993 to work. But then I go so early that none of my colleagues notice it’s my Porsche. Just the woman on the gate gives me a smile each time.”

His friends are allowed to marvel at the Speedster close up. Luna the cat, however, has to keep her distance, as she has already once used the Porsche as a slide. In the winter, he puts Carcoon covers on his two cars. This protects his treasures from damp air and from Luna, as the case may be. As soon as the thermometer goes above the 20 degree mark, Kümmel snatches up his car conditioning set, microfibre cloths, flannels, polishing cloths, foam pads and dusting brushes, and cleans like he’s been invited to Pebble Beach. Wife Monika tries to express the extent of his thoroughness in words: “If we have been for a week’s holiday in South Tyrol, he’ll take another two days’ holiday after that. For cleaning.”

He looks directly into his garage at his dream Speedster

His neighbour, who has long since declared him mad, calls over the garden fence: “In my next life I’d like to come back as your Porsche.” And while those around him chuckle at this perfectionism, he says: “It’s a bit like you are fighting fire with fire. Each drive leaves its traces, without traces there is no cleaning, and without cleaning there isn’t the good feeling of having done it.” Some evenings he sits on his sofa, switches off the TV, presses the little buttons on the remote control for the lights, and looks out of the window – directly into his garage at his dream Speedster, which he will keep even when he too is an “old dog”.