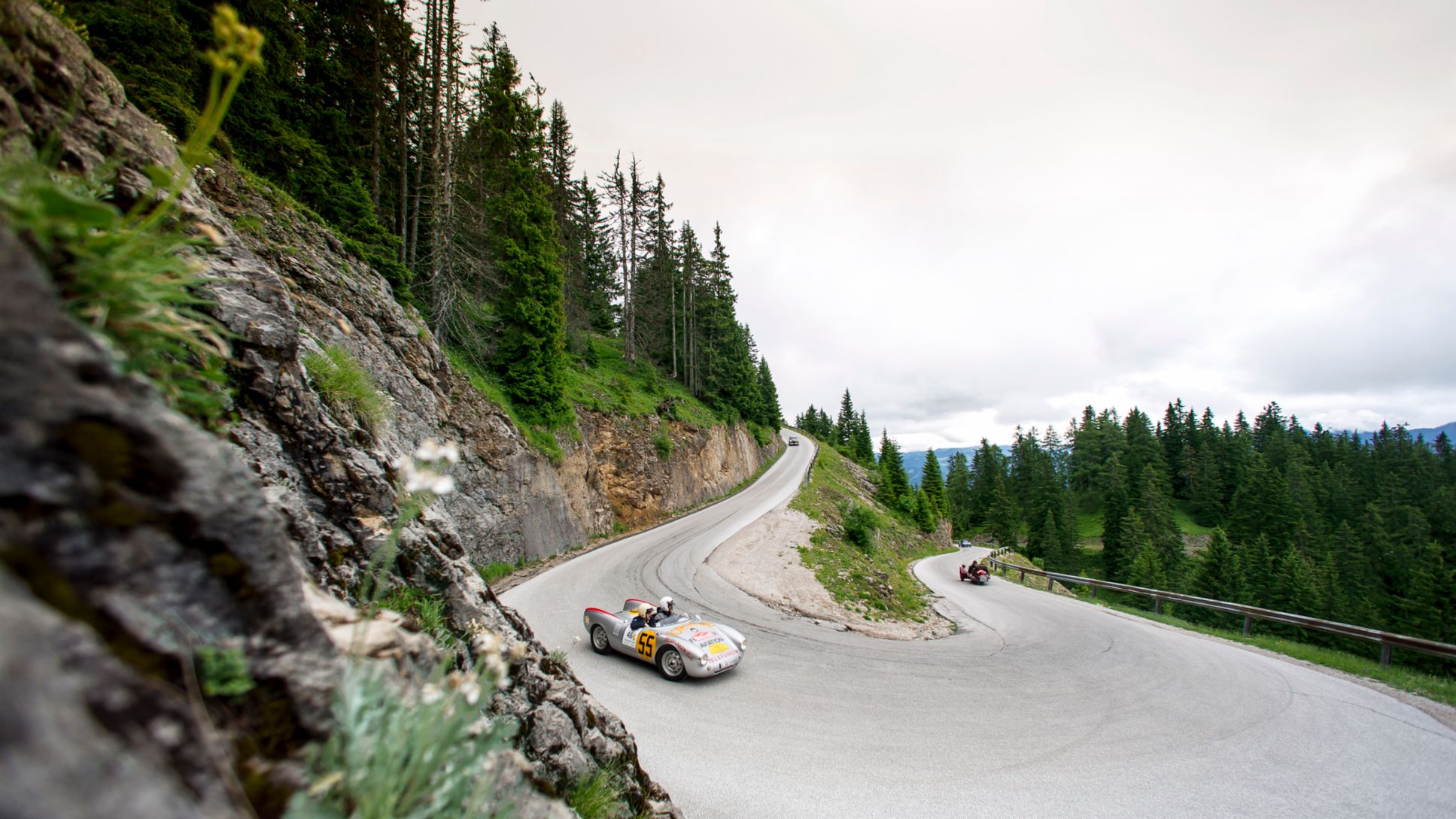 Classic cars are not only attractive exhibition objects; they are also there to be driven. And classic rallies are an excellent opportunity for this – which Porsche also makes regular use of.

Since its premiere in 1993, Ennstal Classic has developed to become one of Austria's best-known classic car rallies. The three-day event that started in Gröbming took the classic cars along low-traffic roads through Styria, Salzburg, Upper Austria and Carinthia. All historic vehicles produced before the cut-off date 31 December 1972 were eligible to participate.

This year, Porsche was represented again with twelve real classics. For example, Chairman of the Supervisory Board Dr. Wolfgang Porsche and Dr. Günther Hovarth were behind the wheel of the 356 Carrera 2, Sales Director Bernhard Maier and Hollywood actor Patrick Dempsey drove the 550 Spyder and Finance Director Lutz Meschke and Christina Rahmens drove the 356 Speedster 1600S. Racing legend Walter Röhrl and tennis star Angelique Kerber also took to the wheel.

For decades, motorsport events on the historic Solitude circuit between Leonberg and Stuttgart delighted hundred thousands of spectators. In 1965, a decision was made to shut down the racetrack. In memory of the motorsport events of days gone by, last weekend the classic car motor racing festival “Solitude Revival” was held. The Porsche museum supported the event and presented unique classics from its collection, for example a 356 B 2000 GS Carrera GT, known as the “Dreikantschaber” (“triangular scraper”). A further highlight: the 356 B 1600 GS Carrera GTL Abarth.

However, this year the Solitude Revival was overshadowed by a tragic incident: five people were injured during a race accident and the race was terminated.

At this year's Classic rally over a total distance of 588 kilometres, 160 classic cars explored the most attractive routes in the Vorarlberg region in Austria before tackling demanding mountain passes taking them into Tyrol. A wide range of historic cars was represented: from pre-war vehicles to cars from the era of the economic miracle and modern classics. Among them were two 911s from the Porsche museum: a 911 Turbo Cabriolet built in 1989 and a 911 SC Targa dating back to 1981.

Over a period of three days, the drivers and passengers of 22 cars with alternative drives also took up the challenges of the Austrian alpine roads: during the Silvretta electric car rally the electric and hybrid vehicles accompanied the classic cars over a shorter distance of 380 kilometres in total. This year Porsche was represented with three plug-in hybrid models for the first time: the 918 Spyder, the Cayenne S E-Hybrid and the Panamera S E-Hybrid.

Since 2009, Bensberg Classics has been defined first and foremost by exclusiveness and premium quality. With the slogan “Very important cars only” this year, again, exceptional vehicle models – many of which were built once only – were presented against the backdrop of the Althoff Grandhotel Schloss Bensberg. The highlights of the programme were the FIVA-A Concours d’Elégance, a special stage for high-calibre classic cars and the Rallye Historique. This year, Porsche participated again with selected models like the 911 Carrera Clubsport (1985) and the 911 Carrera RS 2.7 (1972).

With winding roads and numerous ascents and descents, the Bergisches Land region offered the perfect general conditions for the Rallye Historique. Driving precision was the decisive factor on the route with a total length of 200 kilometres. It was not achieving top speeds or fastest times that counted – the focus was on regularity tests and tests of skill.