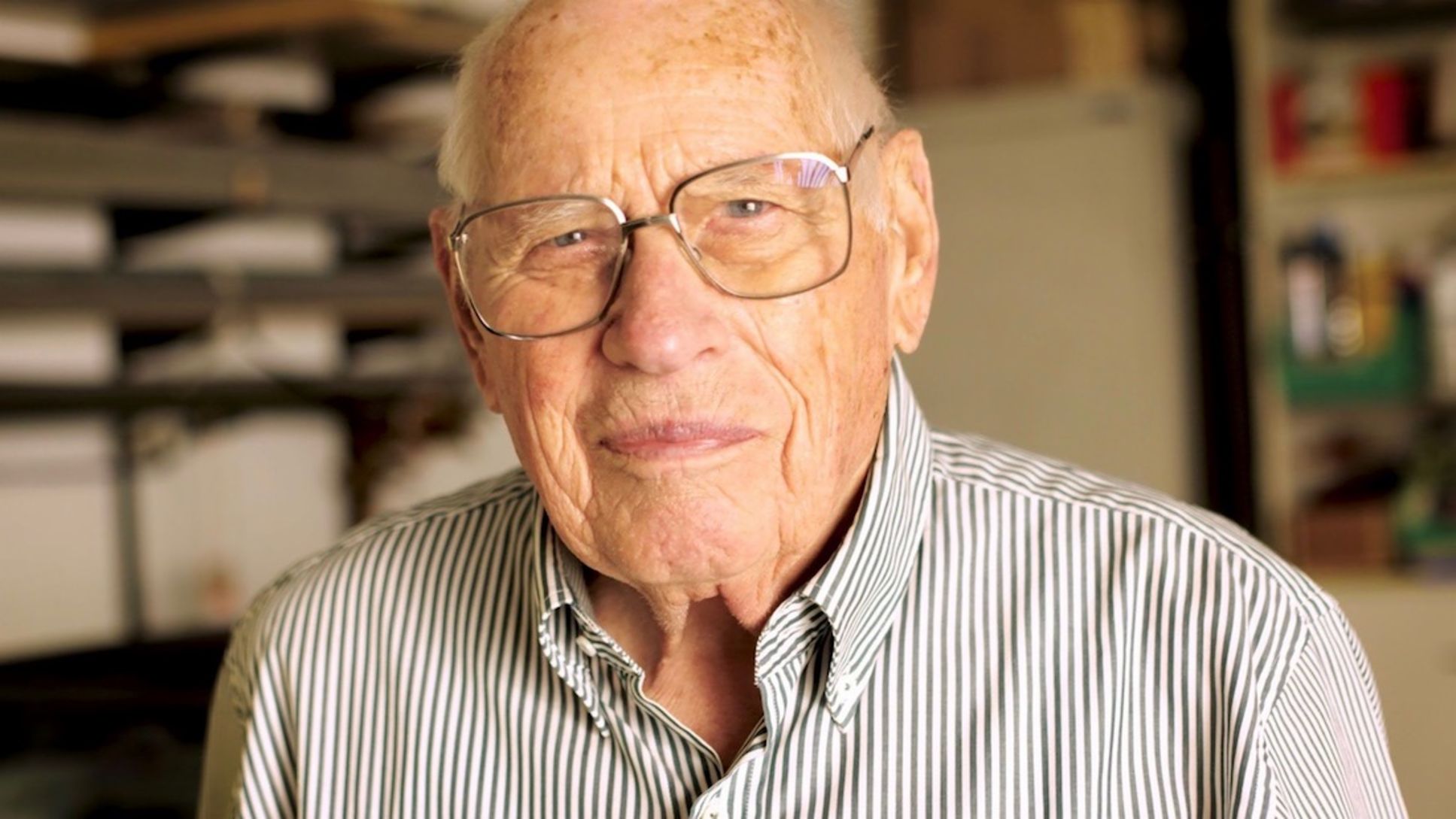 From trainee and factory driver to Operations Manager at the test and development centre in Weissach. Herbert Linge looks back on an outstanding career at Porsche. He is one of the few people of the era who personally got to know company patriarch Ferdinand Porsche. His memories are recorded here for posterity.

“I think back on the times I met with the professor with great fondness. He was always keen to listen to the workforce, and one day when he came in person to the training workshop to greet us, he shook each of us by the hand,” remembers Herbert Linge. “His son Ferry was often with him.” The professor that Linge talks about is company founder Ferdinand Porsche, and as Linge talks about him, his eyes light up.

Herbert Linge formed a personal acquaintance with Ferdinand Porsche. It was on 1 April 1943 that Linge joined Porsche, while the company was still temporarily located in Gmund, Austria, and several years before the company’s 1949 return to its roots in Stuttgart-Zuffenhausen.

Linge trained as a sports car mechanic and was involved from the outset in developing the first Porsche 356 designed in Stuttgart. Later on, Ferry Porsche would dispatch him personally to the USA, tasked with working on developing the Porsche customer service division. Herbert Linge’s love of motorsport grew stronger with every year he spent at Porsche, and after a spell as a test and development driver, his passion even led to him competing in races:

First as co-pilot and mechanic, for instance in the Carrera Panamericana in 1952, and later at the reins himself in the Volant. He drove that car in the Mille Miglia, and the Liège-Rome-Liège Rally – the latter of which he won, along with the Marathon de la Route at the Nürburgring.

Linge: “The drivers had huge respect for the 917”

The Porsche pioneer still gets excited today when he talks about the Le Mans race, and he becomes extremely impassioned as he mentions the Porsche 917 he drove there, recalling the experience as if it where yesterday. “The drivers had huge respect for the 917. At about 370 km/h down the Mulsanne Straight, it left them all trailing. You must remember though that the vehicle was revolutionary at the time in terms of its aerodynamics. We had a wind tunnel in Stuttgart, but it was only set up for the 906 at most.” Though Mercedes took a similar risk, Porsche decided to switch to the 908 long tail when problems arose. “Mercedes couldn’t do that, they didn’t have an alternative car,” says Linge.

As the crowning glory of his involvement in Le Mans, Herbert Linge worked with Steve McQueen in the film of the same name in 1971. He drove a Porsche 908 that was used as a camera car during the shooting of Le Mans, and was designed to capture the required footage. “McQueen had a great affinity with Porsche. Our racing driver at the time was fully behind the film and we helped McQueen out where we could,” Linge remembers. “For insurance reasons, Steve couldn’t take part in the actual race itself, and nor did he have a car which met the official standards. But he still wanted authentic images for his film – so I gave him what he wanted with the 908,” says Linge.

“That car was not an easy one to use, because sometimes we went quicker than the other cars, which meant we had to wait. We weren’t supposed to win!” recalls Linge. In the end, Herbert Linge still came in 8th in the 908.

It was Linge that brought Porsche to Weissach

The pioneer stands on the balcony of his home in Weissach, from where he enjoys a clear view onto the development centre. Linge was born in Weissach and lives there to this day. In fact, it was Linge that brought Porsche to Weissach: “I convinced Ferry Porsche to bring the company to my home town of Weissach in the late 1950s. Logistically speaking, it was ideally located close to Zuffenhausen and yet was remote enough not to attract too much attention. And of course there was far more space here to build a test track than in the city,” says Linge. “Of course initially our test track was just a circle,” he says smiling.

Safety was always a top priority for Linge, shaped by the historical context that once upon a time, international motor sport would mourn the loss of at least one driver in almost every race. With that in mind, in 1972 Linge founded the track safety team of the sport’s governing body (ONS). The ONS team saved the lives of many racing drivers, and in 1982 Herbert Linge was honoured for his work with the Federal Cross of Merit. Incidentally, Linge’s official ONS car was a Porsche 914.

At home, he has a 911 Targa from the 1970s parked in his garage, and he likes to regularly take it for a spin – he may have celebrated his 90th birthday in the summer of 2018, but there is little to suggest that Linge is ready to take a back seat just yet.

When he is not being called upon to recount his knowledge of Porsche history, he supports the “Friends of Air-Cooled Boxer Engines” (FLB) Porsche sports club as an active member.