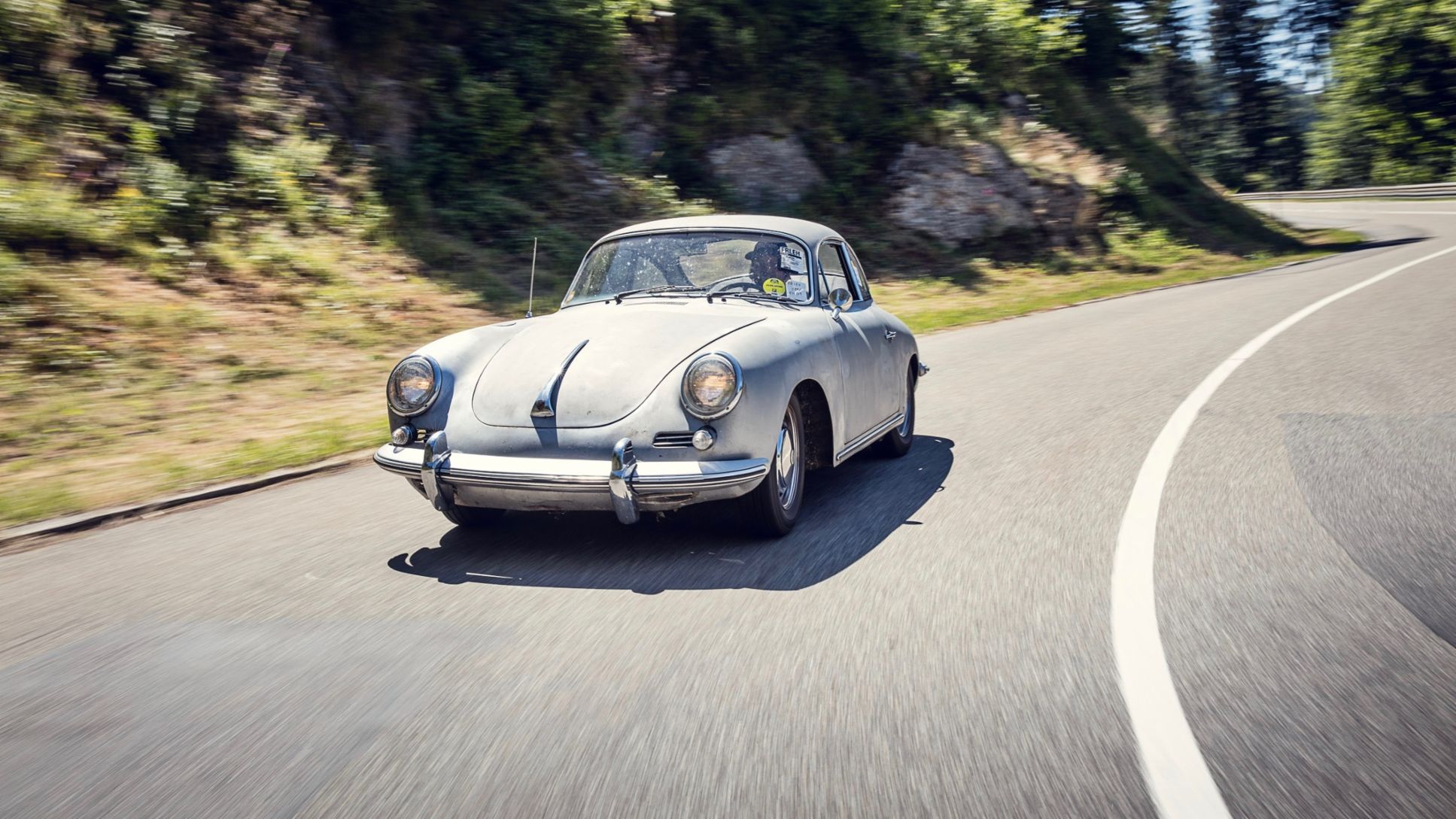 With pathos and patina

Californian Matt Hummel has fallen in love with the authenticity of historic Porsche vehicles. And now he’s had the chance to experience the brand in its home country via a visit to Le Mans with Stuttgart-Zuffenhausen as the final destination on his trip.

More than ten thousand kilometres on the sea have visibly affected the flat engine. Salt has crept in through the ventilation fins on the engine cover and has settled on the visible parts. The first signs of oxidation are flourishing. And at some point very soon, the regulator on the alternator will fail. But Matt Hummel is not going to let these problems stand in his way. The American has devised a roadmap and intends to stick to every detail of its dramatic composition. Hummel had the authentically preserved Porsche 356 SC shipped over from San Francisco and meets it two weeks later at the French port of Le Havre. Ultimately, the plan is to drive via Le Mans to Zuffenhausen – the place that means everything to him: the birth place of his 356 passion.

The 42-year-old from the Californian city of Sacramento has acquired many fans and followers with his unpretentious way of driving Porsche vehicles exactly as he finds them in barns or overgrown gardens. Whether he’s taking them on muddy slopes or dusty hills, Hummel subjects his 356 models to almost any terrain and the social media scene celebrates him for it. “I want to inspire people to go on adventures with their Porsche. For me, visual perfection is not what matters – it’s the driving experience itself. You’re not automatically cool just because you have a Porsche. It’s about what you experience with your Porsche. Like I have with the SC here...”, the Porsche fan muses.

The American has brought the 356 SC from 1964 to Europe for a customer, the plan being to ship the vehicle on to its new owner in Japan after his expedition. Hummel left his much more well-known vehicle, a grey 356 A Coupé built in 1956 with the very fitting number plate of “DON 176”, back in the United States. “Doing this trip with Don would have completely blown my budget and destroyed my schedule. He’s simply better off staying at home. Maybe I will come to Germany with him next year”, Hummel winks. “I found this silver SC in the state of Tennessee for a Japanese customer.” According to Hummel, the vehicle once belonged to Mike Wolfe, one of the main presenters on the famous show “American Pickers”. “Before that, the vehicle was owned by a music producer from Graceland in Memphis. Jazz legend Quincy Jones often rode in the passenger seat; isn’t that cool?” Matt says.

After picking up the vehicle, Hummel begins the journey in his Coupé sports car with a trip from Le Havre to Paris. Based in the city, his friend Rémi Dargegen invited the patina freak, and his Porsche, to the Le Mans Classic venture known as the “Original Flat4 Drivers Club” as soon as he heard about Hummel’s travel plans. Alongside rare Volkswagen Beetles and Bullis, various Porsche 356 models gather in Le Mans, not far from the famous Dunlop curve. Even a “vor A” model built in 1952 parks up on the green. A little later, the arrival of a Porsche 904 model is the high point for the small group gathered at the 24 Hours circuit.

The fresh mussels and home-made Calvados being offered round by the members of the friendly group are soon accompanied by the monotone drone of the Le Mans racing cars. “There’s a really unique atmosphere here! It’s my first time in Le Mans. But certainly not the last”, the American concludes. When Hummel eventually hears about the Porsche Classic Race Le Mans he can barely contain his excitement. To mark the Porsche 70th anniversary, only historic Zuffenhausen models are included in the starting line-up – 81 of them in fact. Super sports cars bearing the numbers 910, 550, 908 and 904 all line up alongside several air-cooled 911 models. Even a 901 can be founding mingling with the icons. To Matt Hummel’s surprise, a well-known figure from the USA leads the pack: Porsche collector and racing driver Cameron Healy is behind the wheel of a 911 RS 3.0 built in 1974. A little later, the 356 “No. 1” Roadster sets out ahead of super sports cars like the 917 and 908 to complete a lap of honour on the circuit and demonstrate the close connection between Porsche and the 24-hour race.

Despite the spectacle, Matt Hummel is keen to say his goodbyes before the final lap of the Le Mans Classic – he is eager to get to Germany via Freiburg and then on to Stuttgart.

In Freiburg, we show Matt the legendary hill climb where Porsche was victorious in 1957 with the 718 RSK: It’s known as the Schauinslandstrasse. Hummel winds his 356 up the pass with incredible skill; the Porsche Cayenne S with the more powerful engine keeps pace only thanks to the Sport Plus mode. At the top, Hummel enjoys a clear view over the French Vosges mountain range and tastes his first ever Black Forest gateau. We stop off at a local hotel called “The Halde” and settle down in the farmhouse parlour at its historic table, in which various racing drivers have also carved their names, thus securing their immortality. That said, we search for Edgar Barth in vain. Hummel runs his hands over the almost 100-year-old oak tabletop a couple of times, enthusing: “I love Germany already. The landscape here above Freiburg is awesome. And what about this historic part of the hotel? And my speedy little sports car on this amazing mountain range...”

The next day we are back in Stuttgart but before the Porsche Museum has a chance to open the archive especially for Matt, the Porsche owner’s club known as “Freunde Luftgekühlter Boxermotoren” (friends of the air-cooled engine) gets in touch. This club is the very embodiment of infectious enthusiasm for the Porsche brand. Chairmen Oliver Berg and Bernd Stadler have sent round an internal email, announcing that a slightly unusual Porsche owner is in the area. The email includes a link to 9:11 Magazine, the video magazine published by Porsche. The video article on Matt Hummel lures in Porsche designers Anthony Hatter and Grant Larson as well as Herbert Linge.

The 90-year-old is an honorary member of the club – not that this prevents him from being just as active as the other members. On the contrary.

Hours later, we see Matt’s eyes shining as he gazes up at the glass facade of the Porsche Museum. Frank Jung, Head of the Historic Archive, rouses the American from what is genuinely a dream come true, inviting him into the museum.

The optimum room temperature in the archive is 18 degrees Celsius, which helps to cool the American off slightly. Frank Jung shows him old racing posters, historic documents, personal letters and vehicle papers from sports cars presumed long lost. He then opens a cabinet full of index cards. “This is our Kardex directory. It contains the data for every Porsche ever delivered”, Jung explains.

“At home in America I have another 356 built in 1952 in Radium Green. It’s number 15004. Do you have a Kardex card for it?” Hummel asks immediately. “Of course”, says Jung. “One second – here it is.” Hummel is awestruck and manages just three words to describe this experience that he will be taking back to America with him: “Thank you, Porsche.” 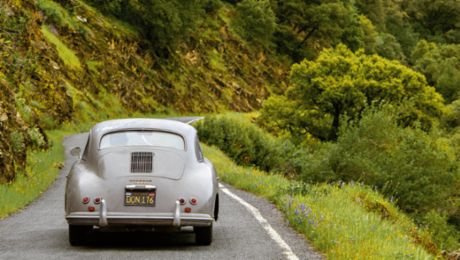 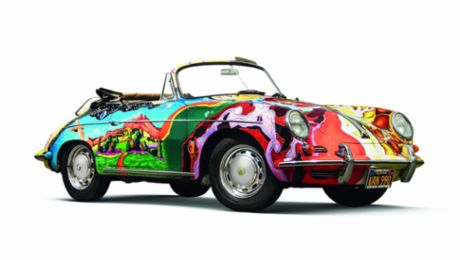 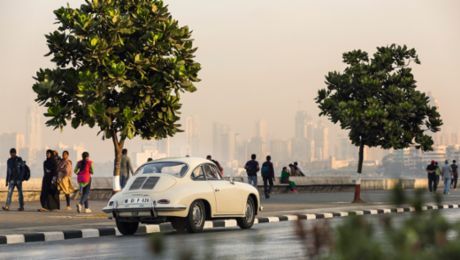