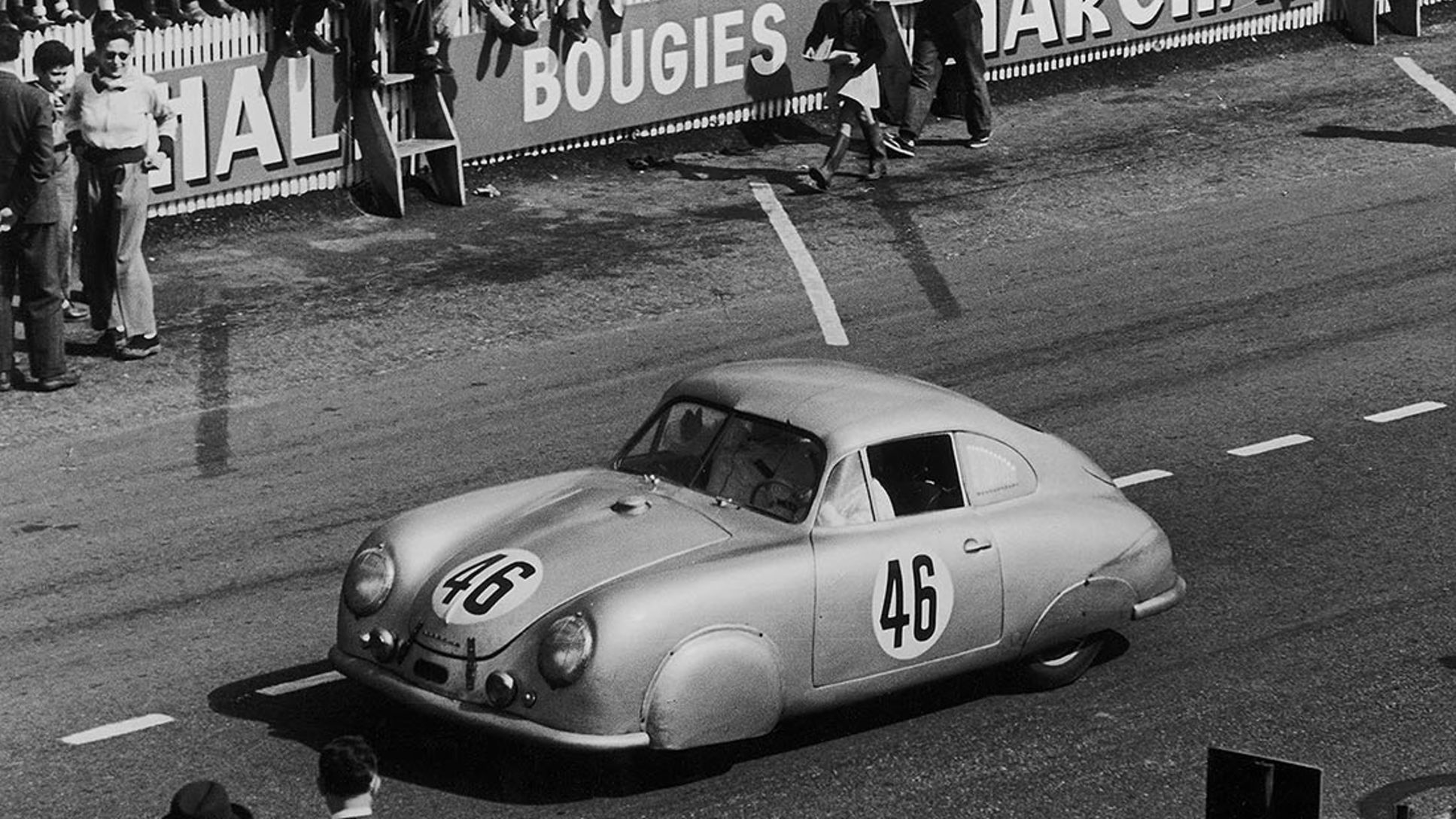 Shortly before the race we look back at the story of the 24 Hours of Le Mans. These begins in the year 1949. And already in 1951 a small delegation from Porsche KG tackles the high-speed circuit.

Class victory right at the outset for the 356 SL Aluminium Coupé marks the beginning of one of the most illustrious legends in motor racing: Porsche and Le Mans. Race cars from Porsche have contested Le Mans every year since 1951. Porsche is the only marque to have competed for 65 years without a break. The reward for this incredible stamina is a raft of records, including 16 overall wins and 100 class victories to 2013. The sporting competition and success at the top echelon of racing in one of the world’s most famous arenas is as much a part of Porsche as the number combination 911.

After a number of class wins in the early fifties with the 550, the first time on the podium in the overall classification came in 1958 with the 718 RSK clinching third place. In 1968, Porsche turns the fastest qualifying lap for the first time. It is the 908 driven by Jo Siffert and Hans Herrmann, who go on to clinch third in the race. In 1969, the mighty 917 makes its debut and is running in the lead when clutch failure forces it into retirement. In 1970 the time has come. Hans Herrmann and Richard Attwood win in a 917 short tail. One year later, Gijs van Lennep and Helmut Marko repeat this feat. In 1976 and 1977 the Porsche 936 Spyder is victorious on the Circuit des 24 Heures with a turbo engine, just as all other victories will be achieved with turbo technology. The triumph of the 935 K3 in 1979 marks the first victory for a customer team and the only overall win for a rear-engined car

After the next win of the 936 in 1981, Porsche fields the 956 in 1982. It is the first racing sports car from Porsche to feature an aluminium monocoque. The body generates ground effect, known from Formula 1, achieving previously unheard of cornering speeds. The 956 and its 962 C successor win the races from 1982 to 1987 without interruption. In 1994, Porsche wins again with a modified version of the 962, before the Joest TWR-Porsche WSC Spyder snatches first in 1996 and 1997. Porsche clinches its most recent overall victory in 1998 with the 911 GT1 98. The most successful Porsche race drivers in Le Mans are Jacky Ickx and Derek Bell with four victories apiece. Hurley Haywood and Al Holbert net three overall wins each.

More than six decades in Le Mans represent more than six decades of technical change and pioneering achievements. Traditionally, the organising body Automobile Club de l‘Ouest (ACO) formulates arguably the most innovation regulations at the top level of racing. Porsche never fails to use the chance to put new technologies through a trial by fire that no test drive could offer. The 904 of 1964 showcases the durability of extremely light metal-plastic composite technology. In 1974, the first turbocharged 911 easily passes the endurance test with long periods at full throttle, like on the 5.8 kilometre Hunaudières straight. From 1982 onwards, cutting-edge solutions for the engine electronics and aerodynamics help the 956 to achieve an unparalleled streak of wins. In 1986, Porsche campaigns the racing version of the ground-breaking 959 (Type 961) featuring all-wheel drive, sequential turbocharging – and a standard gearbox.

Sophisticated aerodynamics for the long straights and ultra-fast corners, exceptional suspensions and brakes, the lightest yet high-strength design as well as superior engine performance are the ingredients for racing success. In Le Mans – and the ACO attaches the greatest importance on this – the magic word “efficiency” is another decisive factor. It belongs to the tradition of the 24 Heures to curtail the amount of fuel used for the marathon sprint yet at the same time leave the door open for alternative power units. The path to victory at Le Mans is, more than at any other race, a question of intelligent performance. Only the cleverly-bundled total package of high, sustainable speed and the lowest possible consumption has the chance to succeed. Efficiency wins.

The ACO rewards the best efficiency with prestigious accolades like the Index of Performance or the Index of Thermal Efficiency. Here as well, Porsche can be proud of its unmatched success. As early as 1955, the 550 Spyder won the fuel consumption classification. Even the 917 netted the efficiency prizes at its historic victories in 1970 and 1971. More recently, from 2007 to 2011, the 911 GT3 proved unbeatable in its class in terms of fuel efficiency and won the Michelin Green X Challenge. In 2016, Porsche again takes up the gauntlet in the fight for overall victory utilising ground-breaking technologies that combine the highest performance on the race track with the highest efficiency.