Porsche Team Germany’s dream of winning the Fed Cup for the first time since Steffi Graf and Co in 1992 has not been fulfilled. Captain Barbara Rittner’s team were defeated 3-1 in the final in Prague against the favourites the Czech Republic.

“I’m proud of my team. We showed our real face today,” said captain Barbara Rittner. “If we’d have started like that then we’d have done much better. But we’ll come back even stronger and we’ll win the cup.”

After Andrea Petkovic’s defeat in the opening rubber against Petra Kvitova (6-2, 6-4) and Angelique Kerber’s surprising loss against Lucie Safarova (6-4, 6-4), hopes amongst the fans of Porsche Team Germany were raised on Sunday when in the enthralling encounter between the two No. 1s, Angelique Kerber’s fantastic fighting spirit had Petra Kvitova on the verge of defeat in front of the 13,000 crowd.

Prague O2-Arena turned into a madhouse

In the decisive third set of the dramatic tennis thriller, the 26-year old German led 4-1 but in the end it was the steely-nerved double Wimbledon champion that came out on top in a high class match. After almost three hours on court, she converted her fourth match point to win 7-6, 4-6, 6-4 and turn the Prague O2-Arena into a madhouse.

“Reaching the Fed Cup final is a fantastic achievement for Porsche Team Germany,” said Matthias Müller, Chairman of the Executive Board of Porsche AG. “It’s a pity that, despite the performance on the second day of the final, they missed out on winning the title.”

In the closing doubles, Julia Görges/Sabine Lisicki secured the only point for Porsche Team Germany with a 6-4, 6-3 victory against Lucie Hradecka/Andrea Hlavackova. In accordance with Fed Cup rules, the fourth singles was not played as the tie had already been decided. 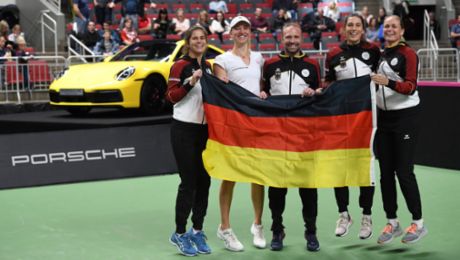 Porsche Team Germany will once again be competing in the Fed Cup World Group containing the top nations.

Porsche Team Germany has started the 2018 Fed Cup season with a major success.