Porsche Team Germany has started the Fed Cup season with a win in Stuttgart. Playing in the Porsche Arena, Angelique Kerber, Andrea Petkovic and the doubles team of Julia Görges and Sabine Lisicki secured a 4-1 win against Australia.

Porsche Team Germany has once again reached the semi-final where they will play the powerful Russians on 18/19 April.

“I’m incredibly proud of my players,” said team captain Barbara Rittner who went on to thank the Stuttgart crowd for their fantastic support: “We just can’t imagine playing anywhere else.”

“It was a real tennis thriller and a great performance by Porsche Team Germany,” said Porsche CEO Matthias Müller who was one of those on the edge of their seats in the Porsche Arena. “The spectators were magnificent in their support for the players and have once again demonstrated that Stuttgart is the tennis capital of Germany.”

After failing to come to terms with the pressure and high expectations in her first match against Jarmila Gajdosova, which she surprisingly lost 4-6, 6-2, 6-4, Angelique Kerber got back to winning ways on Sunday. Much improved when taking on Samantha Stosur in the top match between the two No. 1s, she was in command throughout against the former grand slam champion when winning 6-2, 6-4 in front of a 4,000 crowd.

“I went out onto court and wanted to show that I can do better,” said the Porsche Brand Ambassador. “And with the support of the fantastic crowd, I delivered.”

“It was one of the matches of my career and one I will have in my head for ever,” she said after her gala performance on Centre Court in the Porsche Arena. Congratulated by Steffi Graf from distant Las Vegas, Andrea Petkovic again produced the goods on Sunday, decision day. In another pulsating rubber, she eventually defeated Jarmila Gajdosova 6-3, 3-6, 8-6 to clinch Porsche Team Germany a place in the semi-final against Russia. 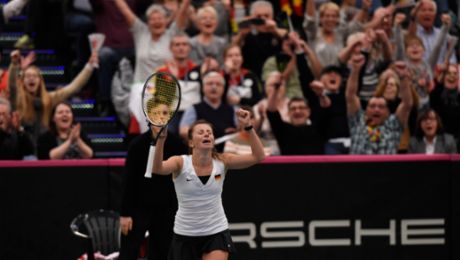 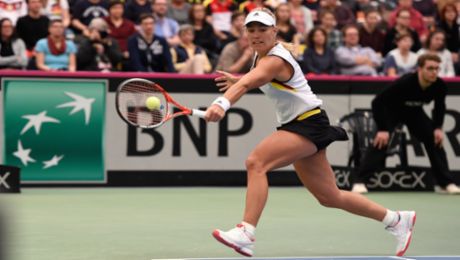 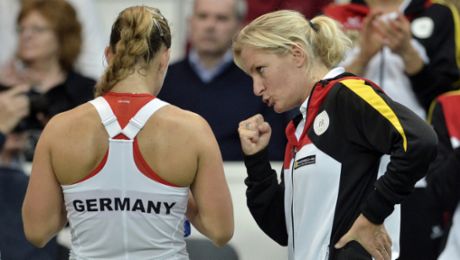 Barbara Rittner and Anke Huber talk about the Porsche Team Germany, which is playing in the Fed Cup final.