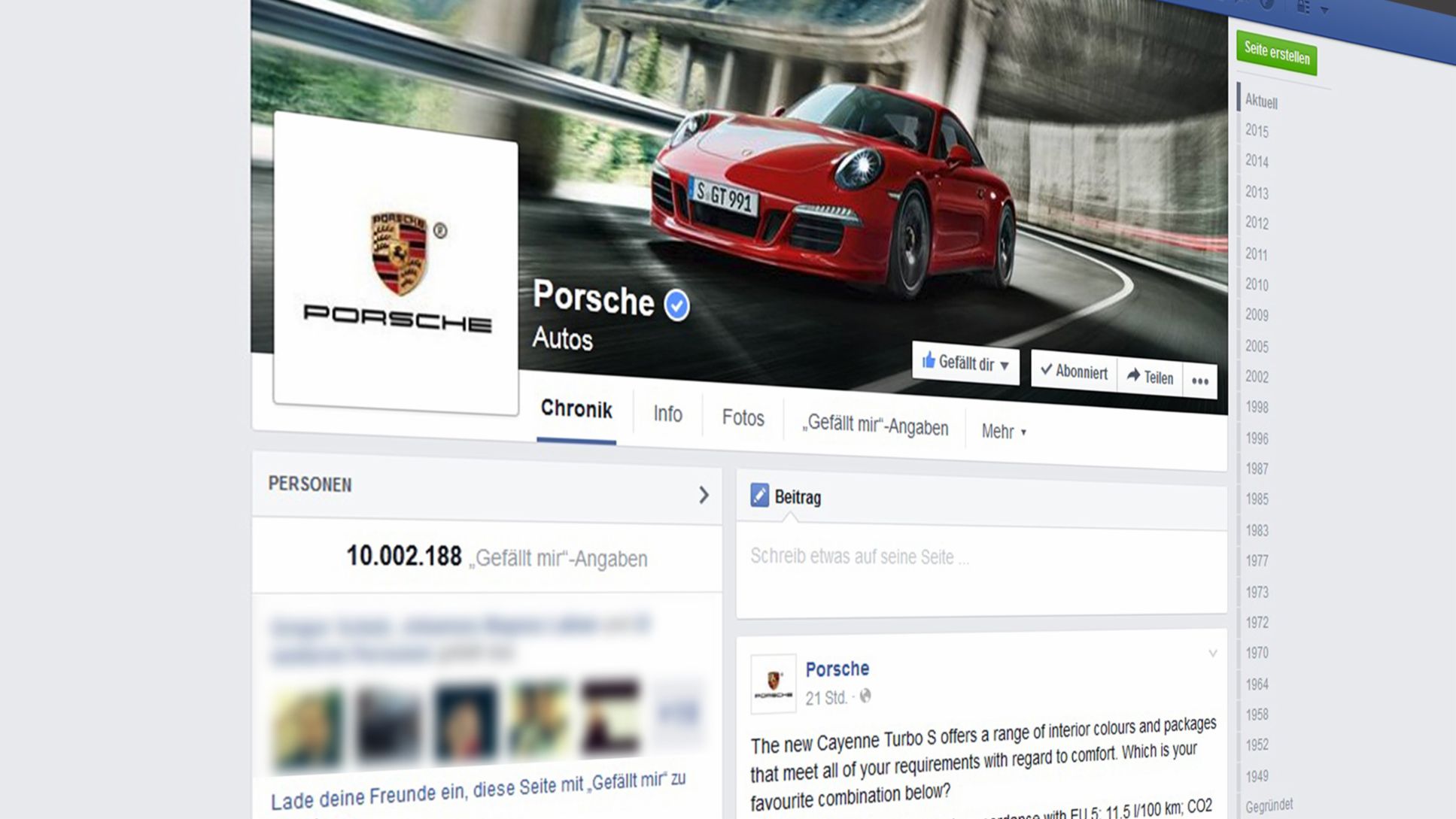 Porsche not only creates a sensation with its sports cars – but online, too, the company is also adopting innovative approaches. And with success as well: on Facebook the brand has surpassed the ten-million-fan mark.

Ten years ago, when Porsche wanted to report on company developments, it printed brochures, wrote press releases and displayed posters. All of this does indeed still take place – but it is supplemented by a host of new opportunities. The Internet, in particular, with social networks such as Facebook and Twitter offers a range of advantages. “Compared with classical instruments, social media enable us to communicate even faster and more directly with customers and sales prospects,” explains Robert Ader, General Manager Marketing Communications. Furthermore, another advantage of the channels is that they offer more direct user feedback and hence the opportunity for interaction.

The fact that a presence on the social web today is not just an option but very much a necessity is also shown by an investigation conducted by the German Federal Association for Information Technology, Telecommunications and New Media (BITKOM). According to these findings, almost four out of five Internet users in Germany are registered on at least one social online network. Among those aged between 14 and 29, the figure is as high as 90 per cent. What is more, in the USA, some 70 per cent of new car buyers are fans of an automobile brand on Facebook, and 65 per cent of American Porsche owners are also fans on Facebook.

Natural growth without advertising or competitions

For many years, Porsche has been represented on various platforms, with the company systematically pursuing a strategy of natural growth: fan statistics are not artificially inflated by advertising or competitions. On Facebook, the largest global social network, fans receive a daily update on the world of Porsche with the aid of pictures and videos. The platform Google+ offers similar added value. In 2008, Porsche became the first car maker to maintain its own channel on the YouTube video portal. Visitors to the site can choose from more than 1000 clips and films connected with the sports cars from Zuffenhausen, while the short messaging service Twitter provides rapid updates in the form of 140 characters.

In contrast, the platforms Pinterest and Instagram focus on pictures. With its sights specifically on the Chinese market, Porsche manages profiles on Sina Weibo, a microblogging service similar to Twitter, Youku, the Chinese equivalent of YouTube, and WeChat, a popular messaging application in China. All the channels are controlled centrally within Marketing Communications, in close consultation with the respective markets.

However, in addition to customers and fans of the brand, journalists and bloggers are also increasingly searching for information online, and the company has created the Porsche Newsroom for their benefit. The Internet platform delivers up-to-date news and background reports, which are supplemented by extensive additional multimedia services. “They include videos, series of pictures, downloads and links to other sites – every article is a separate theme-based portal,” says Dr. Josef Arweck, Director Internal Communications & Online-PR. “Here too the essential feature is the link with social media.”

The services do indeed attract interest – as demonstrated by a special milestone. Porsche passed the ten-million-fan threshold on Facebook. By way of a thank you, the sports car maker has devised a special campaign, giving interested fans the opportunity to win a road trip with a 918 Spyder. In keeping with the landmark celebration, the trip covers a distance of ten million decimeters – which converts to 1000 kilometres. Facebook users will see a panorama photo illustrating a section of the route included in the road trip and will then have to guess its location.

The person who is closest to the actual site will win the trip together with a companion of their choice. “The campaign reflects an aspect that is also very important to us in everyday communication within social media,” Ader points out. “We establish the connection from the digital to the real world, from the virtual to the real fascination of Porsche.”

Facebook currently hosts the largest number of Porsche supporters on social media. Every day images and videos on the world of Porsche help to keep fans up to date.

The platform Google+ is similar to Facebook in terms of the functionalities it offers. The target group here is considerably more at home with technology than its counterpart on Facebook.

Porsche has been maintaining its own YouTube channel since 2008, and was the first car maker to do so. It has published more than 1000 videos on the channel to date. These videos generally cover a very wide range of topics and focus on informative, entertaining contents in keeping with the YouTube environment.

Porsche has been represented on the short messaging service Twitter since July 2009. Using 140 characters and the opportunity to provide pictures and videos, the service keeps followers in touch with the world of Porsche.

Unlike the previously mentioned platforms, Pinterest concentrates more on images (in portrait format). Porsche regularly publishes images on this platform which are arranged in certain subject areas, known as “pinboards”.

Instagram is a rapidly growing platform that focuses on images and videos of up to 15 seconds in length. In contrast to Facebook, the pictures are published in a square format.

The Internet platform delivers up-to-date news and background reports on Porsche. They are supplemented by an extensive range of multimedia services such as videos, series of pictures, downloads and links to other sites. Here too the essential feature is the link with social media.

A separate channel on Twitter also supplies subscribers with the latest updates from the Porsche Newsroom.

Sina Weibo is a microblogging service similar to Twitter that is very common in China. Porsche has a profile on this platform which is managed by Porsche China.

Youku is the Chinese equivalent to the video platform YouTube. It is where Porsche China publishes emotive video contents, categorised into various model lines for Chinese Porsche fans.

WeChat is one of the most popular messaging applications in China. Comparable with WhatsApp, WeChat enables companies such as Porsche China to communicate multimedia Porsche contents directly with smartphone users.