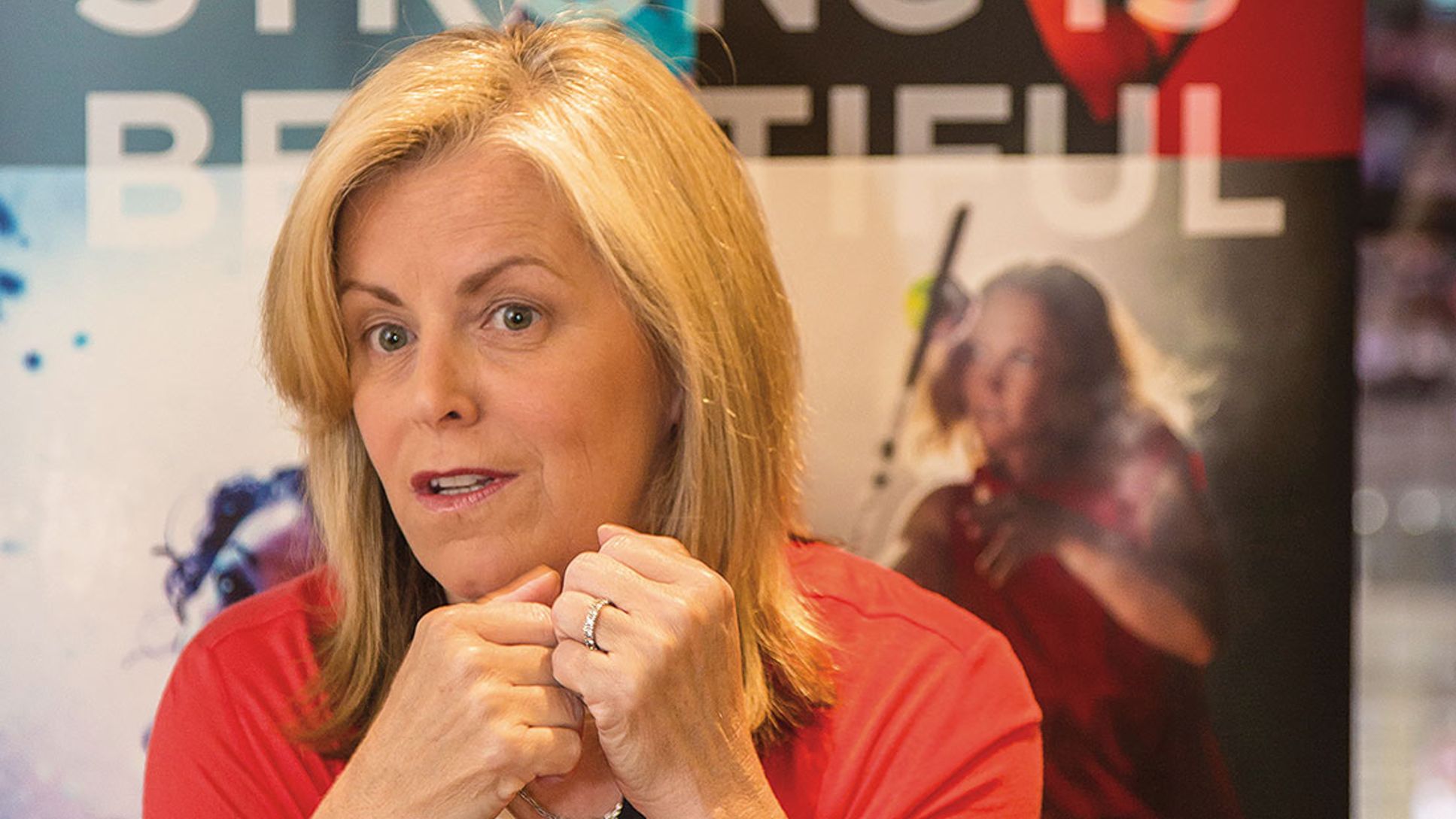 The WTA president Stacey Allaster talks about the latest developments in women's tennis and the great significance the Stuttgart tournament has in the global WTA calendar.

"Ms. Allaster, together with your Board of Directors, you have visited the Porsche Tennis Grand Prix again this year. How important is this tournament for the WTA?"

"The Porsche Tennis Grand Prix is of great importance to the WTA. Year after year, it revitalises our vision that women's tennis is the most inspiring and fascinating sports event in the world. I have had the great honour of visiting the tournament several times already and I think it sets a high standard in every respect. But the most important thing is that the Porsche Tennis Grand Prix is a tournament the players love. There are numerous living legends of our sport immortalised on its victors' lists – and they all came back, year after year. For me, it's always a great pleasure to attend this tournament.”

"In your view, why have the players selected it so often as their favourite tournament in the past few years?"

"The WTA has 22 premier tournaments. The fact that the players have chosen the Porsche Tennis Grand Prix as their favourite tournament five times in the last few years is huge praise in itself for Markus Günthardt, Anke Huber and their team. In sync with the aspirations of Porsche, they offer the players every year a world-class event, whose quality ultimately inspires their playing. The director of the tournament and his sports director have a keen eye even for the smallest detail, which ends up making a big difference. And despite the high level they have already achieved, they ask themselves what they could do to make the event even better next year.”

"How is the Porsche Tennis Grand Prix different from other tournaments?"

"Many tournaments offer the players everything they need to feel comfortable and deliver good performances. It's the precision applied to each and every aspect that makes the Porsche Tennis Grand Prix so different and so special. For the team behind this tournament, there are no problems but only solutions in order to support the players in the best way possible. And then there is the enthusiasm of the fans that can be felt everywhere, lifting this tournament up to the highest level."

"The WTA represents more than 2,500 women players from 92 nations. How important is the well-being of the players to you, and where do you see the responsibility of the WTA?"

"The health and well-being of our players has top priority for us. We have at our disposal a highly qualified team of sports scientists and doctors. One of our directors is on the road throughout the year, lending support to the players, their coaches and parents in all vital questions. And then we have a special team that focuses on professional development programmes. Thus the WTA supports rookies on their way from junior leaguers to the professionals. WTA Transitions offers consultancy as well as aid and support to players who are nearing the end of their active careers and advises them in all relevant questions, e.g. higher education, training as a coach, financial management and media training."

"Women's tennis developed at breath-taking speed over the last few years. What were the decisive events in your eyes that set the course for the future?

"One crucial step was the introduction of our road map with which we initiated comprehensive tournament reforms in 2007. Our vision was to build up a tournament structure that enabled top players to attend more tournaments, yet offered them more time for recovery after the end of a season, so as to reduce the number of injuries and thus ultimately also extend their sports careers. We had, for example, 15 players who were over 30 years old among the top 100 in February, including the number 1, Serena Williams. She is still right at the top and breaks records, even at 32!"

"What is the current status of women's tennis in 2014, and where do you want to be in the near future?"

"Since the tennis markets in Europe and the United States are saturated, it was important to establish women's tennis in future markets such as China, Southeast Asia and Brazil. In 2008, the 35th anniversary of WTA, for instance, we opened an office in Beijing and upgraded the China Open to a Premier Mandatory Tournament. This year, our players can play two tournaments in a row in Brazil, first in Rio de Janeiro, then in Florianopolis. In Southeast Asia, we now have more tournaments than ever – our crown jewel, the WTA Championship, will be held in Singapore in the next five years."

"What is the role of sponsors with regard to this expansion?"

"Reliable partners are enormously important to our success. The WTA deems itself quite happy to be supported by such innovative sponsors like SAP, Xerox, Rolex, Dubai Duty Free, Oriflame and USANA, whose ideas about the growth of women's tennis around the globe coincide quite well with our own visions. The long-standing support of the tournament in Stuttgart by Porsche is a perfect example of successful collaboration as a team, whose aim is to carry forward the growth and development of women's tennis."

"The expansion over the last few years has happened mainly in Asia. Doesn't that somewhat neglect the rest of the world?"

"Europe and the United States were and are great stories of success for women's tennis. Tennis is very popular there, and many of our players come from these countries. It is fascinating to observe what a global phenomenon tennis has become. That is one of the reasons why we have to be on the lookout for development opportunities for women's tennis in future markets as well. But don't you worry: there will be 23 tournaments in Europe again in 2014 and thus more than in any other region. So if you add Roland Garros and Wimbledon, Europe will certainly keep its key position in the global WTA calendar. There is also an extra week between Roland Garros and Wimbledon as of 2015, so that fans can look forward to an extended season on grass in Europe."

"Two players are currently exciting fans all over the world: Maria Sharapova and Serena Williams. How important are superstars like them for women's tennis, and who, do you think, could follow in their footsteps?"

“There's no doubt that players like Serena Williams, Maria Sharapova as well as Li Na are the superstars of our sport. They excite us all not only with their great performances on the court. Their charisma goes far beyond sports: regardless whether it's Serena Williams building schools in Africa, Maria Sharapova becoming CEO in an international company or Li Na being selected by TIME magazine as one of the hundred most influential personalities of our time. These players stand for the vision of those women who, at a time long ago, had a dream that led to the founding of the WTA."

"Who will be able to replace these superstars in the future?"

"The future also looks brilliant. We have young players who are in the process of leaving their own imprint on tennis. Remarkable talents are the Canadian Eugenie Bouchard, for example, the American Madison Keys, Garbine Muguruza from Spain, the Briton Laura Robson, Monica Puig from Puerto Rico and Elina Svitolina from Ukraine – together with the German Annika Beck, who just turned 20 and has already been ranked number 46 in the world."

"How do you assess the development of women's tennis in Germany and what do you think the best German players are capable of achieving?"

"Tennis fans in Germany can really be proud of the players representing their country in WTA tournaments the world over. Second to the United States, Germany has more players in the top 100 than any other country at the moment. That represents a great success in a global sport like tennis. Angelique Kerber is firmly established in the top 10; Sabine Lisicki reached her first grand slam final in Wimbledon last year; Andrea Petkovic and Julia Görges were ranked in the top 10 and top 15 over the last few years. These players are strong not only on the court, they are also some of the most popular athletes on the tour. It is glorious to experience the team spirit of the German players, the way they encourage and support one another. I believe there are no limits to their development in the future." 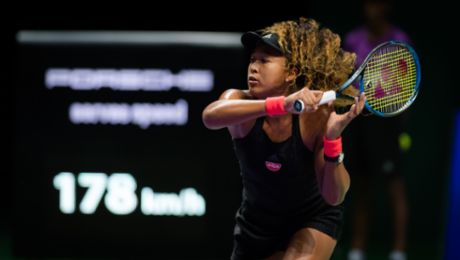 The Porsche Brand Ambassador has successfully defended the title she won last year. 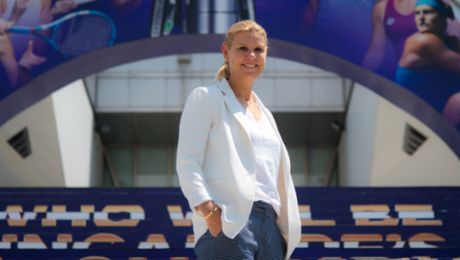