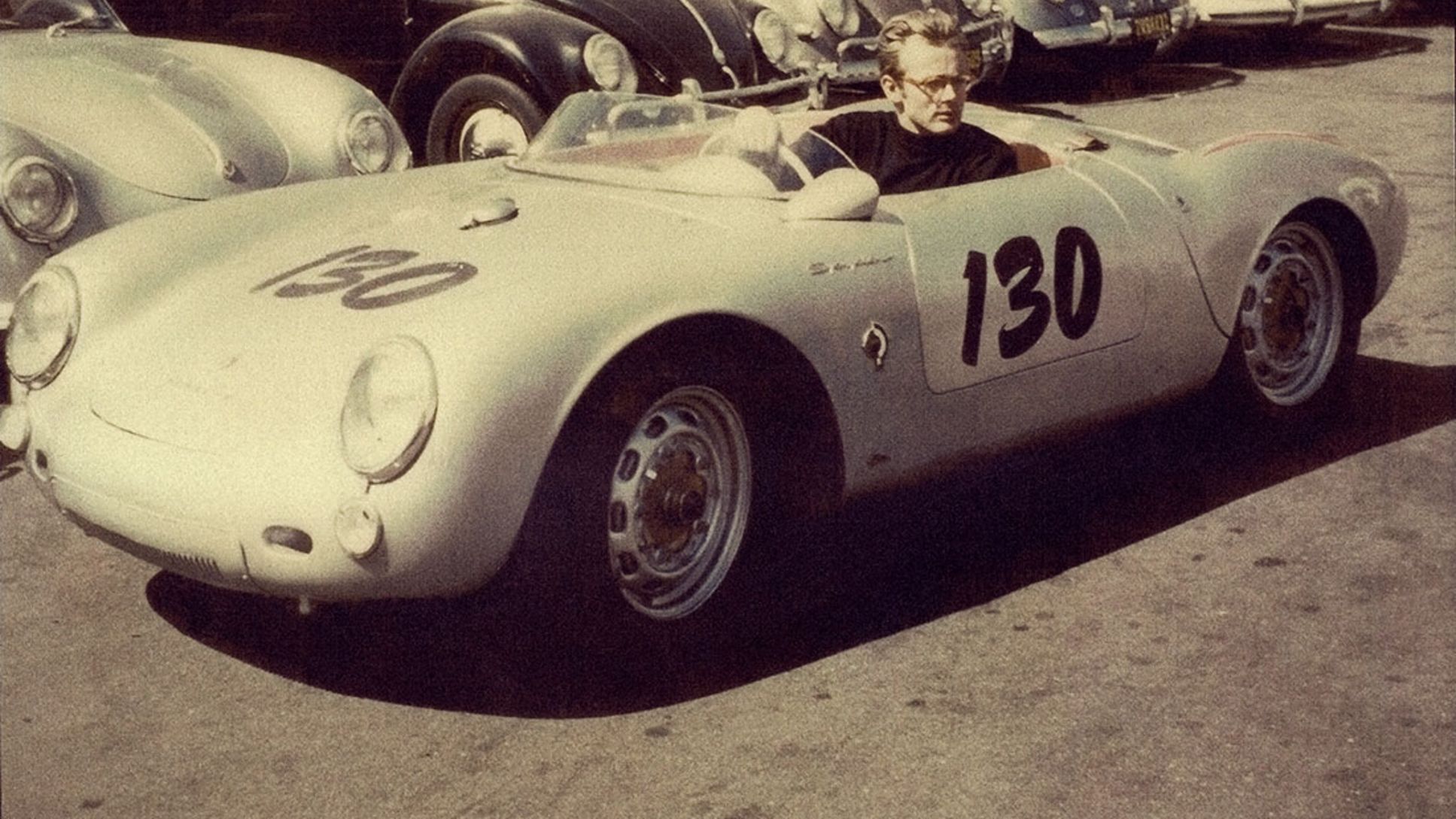 An unconventional young fellow with a melancholy look and rough manners, who lived fast and died tragically: actor James Dean became a legend 60 years ago.

The most streamlined sports cars from Stuttgart are the ones that hold a special fascination for James Dean. They are fast and beautiful, emotional and pragmatic—these unpretentious, intense Porsches suit the nonconformist lifestyle of the young actor. Dean first had to fight for his place in life; his brief acting career on Broadway in New York came only after some hungry years of training. Now, in 1955, the 24-year-old, who grew up in Indiana, has succeeded in landing his first leading roles in Hollywood movies.

With his defiant and simultaneously passionate and reserved demeanor, he reminds direc-tor Elia Kazan of John Steinbeck’s fictional character Caleb Trask. The famous author him-self describes James Dean as the ideal actor for the filming of East of Eden. Dean is a con-flicted character who oscillates between aggressive intensity and cold equanimity; he is cynical and vulnerable at once. This trait, which can hardly be concealed, marks the way he acts. Dean places his own painful stamp on his roles.

Frailness under an ever-so-thin layer of coolness

At this point the big Hollywood studios only realize that an elemental force is in their midst. They try to domesticate the wild young man, but he confronts the well-mannered mainstream movie business with resistance, skepticism, and even condescension. The young actor runs riot; he lives fast, unyieldingly, obstinately. Although he is forbidden from engaging in “dangerous sports,” he joins the vibrant West Coast racing scene and enters his Porsche 356 Speedster successfully in local contests.

His restlessness and thirst for life have deep-seated roots. When he is nine, his beloved mother dies of cancer and his unfeeling father never manages to reach this boy, who is shattered to the core by his mother’s death. So Dean is sent from Southern California to the puritanical household of his aunt—misunderstood, wounded, abandoned. His journey out of darkness becomes a struggle against an overwhelming magnitude of teenage angst. It is this frailness under an ever-so-thin layer of coolness that enables him to become a hero to his young audience. The unconventional young fellow with a melancholy look and rough manners serves as an outstanding projection screen for the youth of the 1950s, between the Korean War and rock ’n’ roll.

The studios are fighting over him

By the time Dean trades in his Porsche 356 for a considerably faster 550 Spyder in Sep-tember of 1955, it has become a status symbol for individualists in the United States to possess a Porsche. The brand is young; the cars are spartan, authentic, and uncompromis-ingly sporty. Dean finds himself in this deeply emotional anti-mainstream car—and reali-zes on some level in September of 1955 that he has made his breakthrough in the film bu-siness. The studios are fighting over him, and his agent is already negotiating for substantially higher fees. On September 30, he is full of vitality and high spirits as he sets off on a trip to Salinas.

California State Route 46 tumbles down into the valley of Cholame Creek. Only a few road cruisers are making their way through the valley below like shiny bumps of chrome and steel. And then there is this small silver Porsche 550 Spyder zooming down from the hills like a UFO, with a hoarsely panting four-cylinder boxer engine, a fabulous 81 kW (110 hp), a feather­weight 550 kilos (1,212 lbs.), and a peak speed of nearly 230 km/h (143 mph) when the gas pedal is floored.

Dean is on the way to the racetrack in Sali­nas, with the German mechanic Rolf Wütherich huddled against the hissing headwind in the passenger seat of the purist Spyder. Wütherich has recommended that Dean carefully break in the 550 Spyder, which is just a few days old, before its first race. The 515 kilometers from Hollywood to Salinas, taking a looping route up the Central Valley to Bakersfield, then west to Route 101, would be just the right amount of road dust and headwind to prepare the mid-engine sports car for a weekend of racing. After all, Dean has just exchanged his 356 Speedster a few days ago for the car. And this compact driving machine needs some exercise before its big day out.

Shortly before 6 p.m., the 550 Spyder with the starting number 130 painted on it and the nickname “Little Bastard” reaches the fateful junction where Highway 41 splits off to Fresno. Then comes the crash. Banal, unnecessary, fatal. The rebel with the wild heart dies on the way to the hospital. Farewell, Jimmy! Sixty years later, his legend lives on.

By Till Daun // Photos from the book  James Dean at Speed, by Lee Raskin  and Tom Morgan