Charl Schwartzel gets up at least two and a half hours before he is scheduled to tee off at a tournament. That can be quite early, because players might easily be assigned a slot at seven in the morning. Which means Schwartzel’s alarm rings at 4:30 a.m. “I don’t like to be rushed in the morning,” he says. “Everything has to be really relaxed.” He begins with a light breakfast, then spends around 15 minutes in the gym for a few activation exercises and lots of stretching. He also practices the all-important rotational movement for his game, using a specially weighted club that has to be swung slowly. After a shower he dresses for work, choosing the appropriate outfit depending on the weather. In Scotland this might be a turtleneck, but usually consists of a polo shirt and long pants. Long pants are required by the dress code, which is very strict on this score—and not just in Europe.

At the range: 45-minute warm-up

Every player has his own warm-up ritual. “I don’t have a set routine,” says Schwartzel. “It depends on the distances between the practice facilities.” He doesn’t need a lot of time; three-quarters of an hour suits him perfectly. A stark contrast to John Daly, who often didn’t show up at the tee until the very last minute in his heyday. Schwartzel’s warm-up session focuses on putts and long drives. For any players who might be interested, he starts with the short wedges like most pros do, moves on to the irons, and only uses the woods at the end. You won’t find a hybrid in his golf bag. Instead, he has what is called a combo set. He spends relatively little time—around ten minutes or so—on the chipping and pitching greens.

Down to business: checking out the course

Schwartzel’s caddy is already at his side. His younger brother Adrian has often assumed this role in recent years, but here in Bad Griesbach he is supported by Shaun Jacobs. Caddies often do not stay at the same hotel as the players do, but it’s essential for them to be there for the warm-up. This preparation is extremely important.

Schwartzel usually arrives at the site of a tournament by Tuesday. He plays in the pro-am competition on Wednesday in order to get a better feel for the course. If he isn’t familiar with it at all, which rarely happens given his ten years as a pro, he also plays a practice round on Tuesday. The four major tournaments of the year (the Masters, U.S. Open, Open Championship, and PGA Championship), are an exception in this regard. “You spend a lot more time practicing on the course beforehand for the majors.”

Tournament round: four and a half hours

Schwartzel works calmly. “When you’re playing on your own, you talk a lot less. I don’t want to be distracted, because that might cause me to make mistakes,” he says. It’s not so important whom he is paired with. “The only problem might be someone who plays very slowly, because that can have an effect on my own game.” His inward focus is intentional. “Ultimately the only person you’re playing for is yourself.” He doesn’t really like to eat on the course, although he will take an energy bar or two and a protein shake along. And drink a lot of water.

After sinking the last putt, the players head straight for the scoring tent to sign their scorecards. But first they confirm the score with other players. “There can be mistakes,” observes Schwartzel. “And if you sign off on the wrong score, you’re disqualified.” This has happened to major players in the past, including Nick Faldo, Pádraig Harrington, and Davis Love. When the round is officially over, the press might be waiting—especially for those competitors who played well. At the end, Schwarzel is in 20th place, and Thongchai Jaidee, a Thai player, emerges the victor. Interviews and recordings can take a good 15 minutes. Prominent events like the majors or the World Golf Championships feature not only individual interviews but also a joint appearance by the leaders.

Later on: time to analyze

When amateur players reach the 19th hole—otherwise known as the clubhouse—they are usually quite tired and ready for a nice cold beer. They might relive their best shots and bemoan the challenges of this demanding sport. For the pros, however, the follow-up looks a little different. “The old days of heading straight to the bar are a thing of the past. It would be nice to do that again, actually, but the game has become much more professional,” says Schwartzel. So he devotes the time to analysis. What worked well, and what was less successful? Were there certain conditions that caused problems? “It’s a little like conversing with yourself,” he says. He then returns to the range to work on improving his game. In certain cases he might even consult a coach.

The day at the tournament is still not over. Schwartzel heads back to the gym, then to a physical therapist. A work-out and a massage help to calm both body and mind. Relaxation and regeneration are much needed. Two and a half hours after his last putt, Schwartzel can finally leave the round behind … and start preparing for the next one!

“I like meat, particularly a good steak.” At the end of a successful day at a tournament, Schwartzel likes to go out for dinner with his family. If he is alone, other players might have to fill in, such as Louis Oosthuizen, who won the prestigious Open Championship at St. Andrews in 2010. The two players grew up together and are close friends. This evening in Bad Griesbach, Schwartzel excuses himself early. “I need a lot of sleep,” he says. The long flight from South Africa to southern Bavaria was also tiring. And tomorrow the tournament will continue.

Charl Schwartzel (31) was born in South Africa. He plays on the U.S. PGA Tour and the European Tour. He won his first major title in 2011, at the Masters in Augusta, and has been ranked number six in the world. Since he turned pro at age 18, he has won nine tournaments on the European Tour and several more on South Africa’s Sunshine Tour, earning prize money of more than 20 million euros. He lives with his wife Rosalind and his daughter Olivia in Florida and South Africa, and calls Old Palm Golf Club in Palm Beach his home course.

Tips from the pro

Asked by an amateur player for the best way to stop slicing (sending shots veering off to the right), Schwartzel winks and suggests, “How about taking up another sport?” So much for pro golfers not having a sense of humor. But then he quickly turns serious. “This is a classic problem for amateurs. It usually has something to do with how flexible your body is. People slice the ball when they are not able to hit ‘through’ it, but instead lean back a little, which means the clubface doesn’t hit square on. To prevent that, you have to go out on the range and work on your flexibility. My quick fix would be: live with it and simply adjust a little to the left.”

You had a Porsche Panamera at your home in Florida. What do you prefer: an SUV or a classic sports car like the 911?

“A Porsche is the epitome of a true sports car. I also see a lot of Cayennes in both South Africa and the U.S. What’s good about them is that you can drive them on any type of road, you can get in and out easily, and they have a lot of room for kids and golf clubs. The best thing would be to have both a sports car and an SUV.”

You grew up in the countryside north of Johannesburg. Did that have any effect on the way you view cars?

“I grew up on a farm, where we drove big pick-ups. So it’s no problem for me to drive a tractor or any other type of larger vehicle. However, I don’t live in South Africa anymore; I spend most of my time in the U.S. And I can tell you: any Porsche is a superb fit for my garage in Palm Beach.”

By Timo Schlitz // Photos by A. Hassenstein/Getty Images, Sammy Minkoff 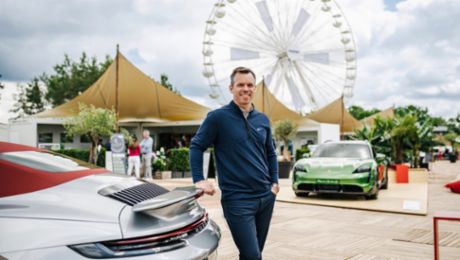