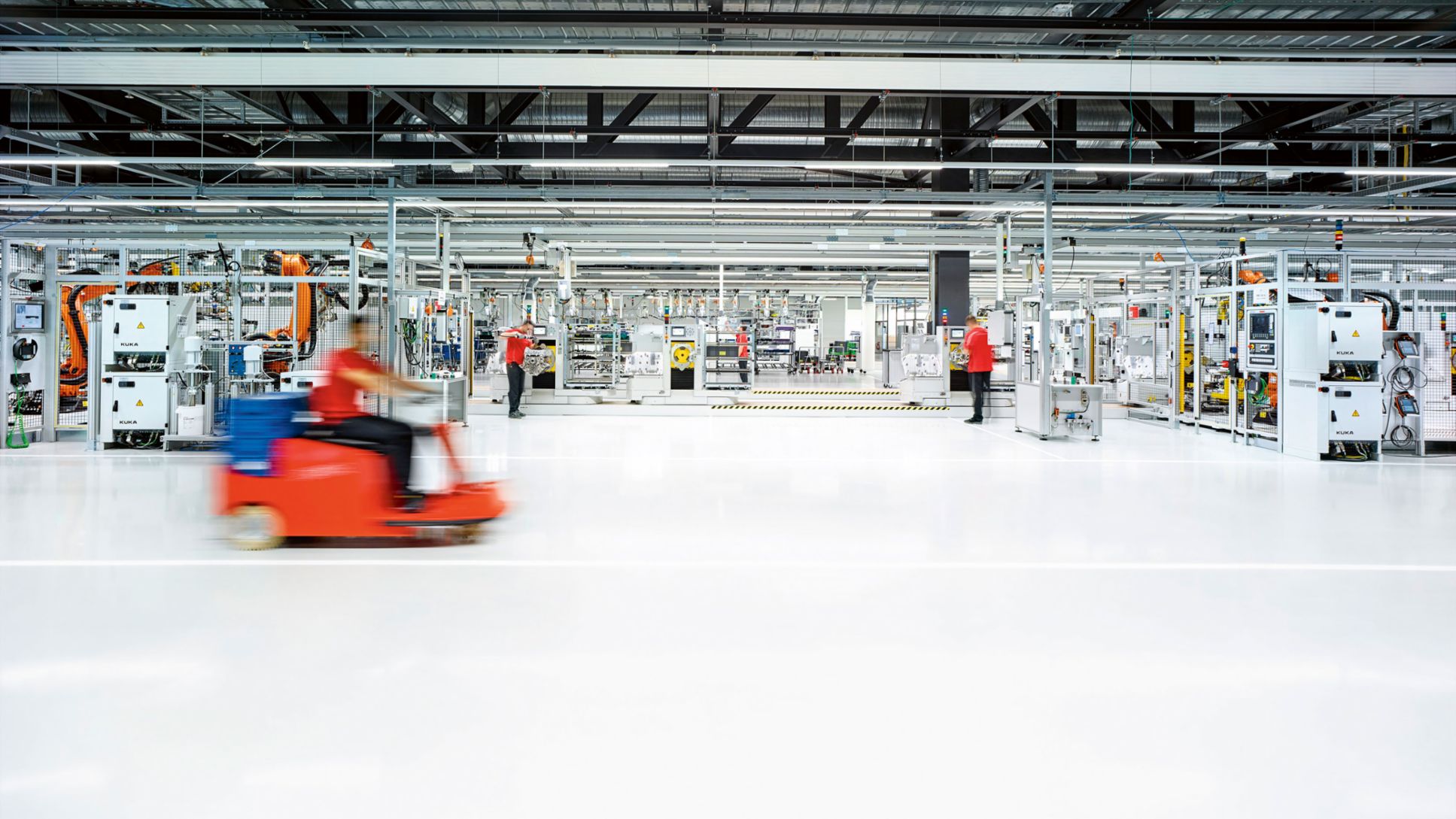 People wherever possible – Robots only as needed

At the new engine plant in Zuffenhausen, Porsche produces  the latest generation of V8 assemblies. A tour of the  brightly lit production hall brings to mind more a high-tech laboratory  than a classic automobile factory. The future is found here.

Mid-2013. A small break room at Porsche’s parent plant. It’s crowded. Board members, developers, and workers’ council members turn expectantly to Christian Will, Porsche’s head of assemblies and components. There is still 34 months to go before production is scheduled to begin for the next generation of the Porsche Panamera—complete with a redeveloped eight-cylinder engine. But time is of the essence. Plans call for an engine plant that will serve the entire Volkswagen Group, so production capacity must be expanded. “We’ll get it done right,” assures Will. The decision is quickly made: the sports-car manufacturer will invest approximately $87 million; a new engine plant will be built in Zuffenhausen.

Three years later, on a hot summer day, Christian Will is in a celebratory mood. Series production has begun. “Everything went according to plan,” he says, even though Porsche broke new ground with the plant in many respects. The assembly area alone boasts around one hundred technical innovations. “You need a high-tech environment to make a high-tech engine,” Will explains. He welcomes visitors in the lobby, which resembles more a technology center than a factory. The 1,417-foot assembly line is located on the third floor. Brightly illuminated by modern LED lighting, the state-of-the-art facility is spotless—much like a highly specialized laboratory. With its white floors and cutting-edge machinery, the sleek layout of the factory sets completely new standards, refining our past conceptions of the future.

A perfect setting for perfect engines

Among the precision systems, employees stand out in their red shirts as they monitor machine operations on computer screens. Up to two hundred engines can be assembled in Zuffenhausen in just one day. Engine production is one of the company’s core areas of expertise. And at this new plant, highly qualified workers are tasked with building such an important part of each sports car—the world-famous Porsche engine assemblies.

The production line is U-shaped. At one end, the cylinder crankcase is secured to a transporter—pure, naked metal, still without function. At the other end, a test bench checks the completed engine’s operations. This step is known as the cold test, and every engine must pass. The journey from start to finish on the production line takes precisely 6.2 hours, with the engine remaining on the moving rail system the entire time.

Similar to a slot-car racing track, the electric transporter system is in continuous operation. Large subassemblies, such as the cylinder head, are preinstalled and fed to the central line in a herringbone pattern. Replacements are supplied by automated electric conveyor vehicles—their routes guided by approximately 16,000 magnetic points installed in the floor.

This modern single-line layout exemplifies Porsche’s production philosophy, which revolves around people. Each employee should perform as many steps as possible on each engine. “Our aim is for everyone to master every step and so be able, in principle, to work anywhere in the entire plant,” says Will. “We embody the ideal of a highly skilled workshop and only use robots when we need absolute precision for exactly the same task.”

The new engine plant reflects Porsche’s systematic trailblazing approach to automotive production. Visitors can already feel the power in these nascent drive systems. Because Porsche refuses to compromise when it comes to the core of its sports cars: the engine. All machines and processes are designed to support the workers in a clearly structured environment. The workpiece carriers, for example, are constructed so that employees can adjust the height of the engines and rotate them 360 degrees. This capability is the ideal in ergonomic design for workers. “No one would expect heart surgeons to work with their hands above their heads,” Will says.

The plant is expected to produce up to twenty detailed variations of the eight-cylinder engine in the future. To ensure precise coordination of plans and results, each engine is immediately assigned an ID number that will accompany it throughout its life. All of the larger components also have a data matrix code, which means that every step in the assembly can be compared to the IT system in real time. The data from all ten tests that the engine must pass during the production process are also documented. With around 2,300 individual units of data, a digital twin of the real engine can be created. The aim is to prevent any fluctuation in quality from the start.

Modern engines are not only designed for high levels of performance—they should also consume ever lower levels of fuel. The new V8 gasoline engine in the Panamera Turbo is an excellent example. It currently generates 410 kW (550 hp) from 4 liters of displacement, but needs only 9.3 to 9.4 liters of fuel according to the New European Driving Cycle (NEDC) to do so in Normal mode (Combined fuel consumption: 9.4 – 9.3 l/100 km; CO2 emissions: 214 – 212 g/km). This tour de force is achieved with the help of numerous individual developments. For example, the cylinder lining has a thin functional coating of just 150 micrometers, which reduces friction and in turn has a positive effect on fuel consumption.

Cleanliness is essential. Dust particles would shorten the lining’s service life. Other precision mechanical systems, such as the camshafts that deactivate the cylinders, would also be impaired by impurities. So some of the fully automated steps of the process take place in specially protected areas. However, the best way to ensure clinical cleanliness in production is to prevent dirt from entering in the first place, which means the assembly and logistics areas must be physically separate. Suppliers deliver components to the ground floor. Each truck drives up a ramp in reverse. The loading zone is then hermetically connected with the logistics center.

By the end of this decade Porsche will also manufacture electric drives in Zuffenhausen. “The new engine plant will play an important role in our plans for electrification,” Porsche AG Executive Board Chairman Oliver Blume declared at the opening ceremony. Because regardless of whether a Porsche is powered by gasoline, diesel, or electricity, the drive system is the heart. Which starts beating in Zuffenhausen. 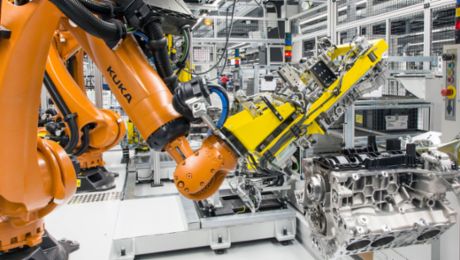 Porsche has official dedicated its new engine plant in Stuttgart-Zuffenhausen.

Wolfgang Reiß, the Plant Manager at Zuffenhausen, looks to the future optimistically. 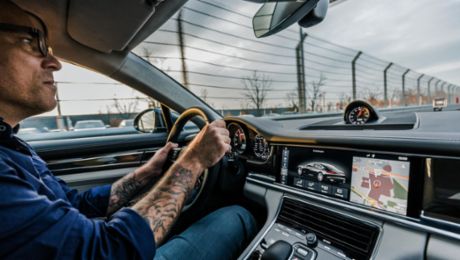 Daddylicious: The Porsche Panamera is put to the test