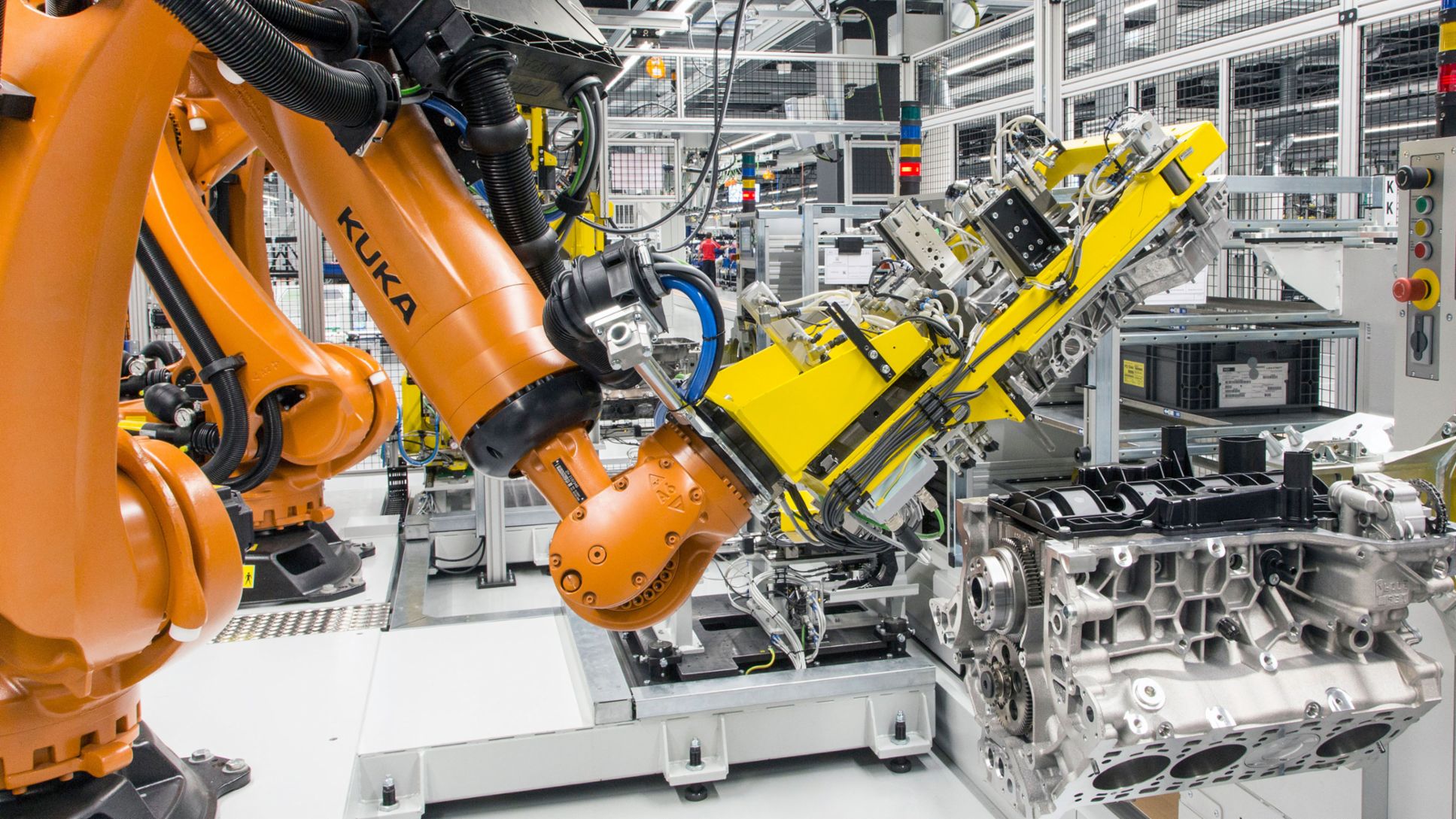 Porsche has official dedicated its new engine plant in Stuttgart-Zuffenhausen. It’s the company’s next chapter in engine manufacturing.

Innovative production for innovative engines: The factory at the main site in Stuttgart-Zuffenhausen works with state-of-the-art production methods, and at full plant utilisation its 400 employees produce around 200 eight-cylinder V-engines daily. The sports car manufacturer has invested nearly 80 million euros in the new production facility.

“Porsche stands for sporty high-performance engines: from engine design to series production,” says Oliver Blume, Chairman of the Executive Board of Porsche AG. “We are further extending our competence in this area with the new engines. This is how we will assure our customers the driving pleasure of tomorrow and safeguard the future jobs of our employees. At the same time, we are creating the necessary foundation for successfully leading Porsche into the new age of electric mobility.” Porsche’s new engine plant will also contribute towards synergies within the Volkswagen Group. Plans call for producing the eight-cylinder V-engines for all Group brands in Stuttgart-Zuffenhausen from this point forward.

Uwe Hück, Chairman of the General Works Council and Deputy Chairman of the Supervisory Board of Porsche AG: “Zuffenhausen is where the Porsche legend was born, and it lives on. The first production cars were built here 66 years ago: the 356 model, the original Porsche. There were 108 employees, and 369 vehicles were manufactured annually. Today, over 1,200 people are employeed in engine manufacturing alone. And if we are to speak of Porsche having a soul, then it is in the engine. Today, it is getting a new home. But Porsche is not only investing in new technologies and buildings. Porsche is investing in people. We are creating state-of-the-art working conditions for our employees. That is because our intergalactic Porsche people are a key factor in our success. The new engine manufacturing facility also shows our commitment to Zuffenhausen, Stuttgart and Baden-Württemberg, to the future of sports car manufacturing and above all to our unique workforce. Porsche doesn’t just talk. Porsche sets the standard.”

Flexible interlinkage of manufacturing and automation

The core aspect of the new engine plant is its flexible production system, in which manufacturing and automation are interlinked harmoniously and efficiently. Assembly of the innovative eight-cylinder V-engines, which will at first only be used in the new Panamera, requires extremely precise processes. That is why production responsibility rests mainly on the shoulders of the highly qualified and very well-trained employees. “We have already involved our team intensively in planning and have received over 450 ideas for the new plant,” says Albrecht Reimold, Member of the Executive Board for Production and Logistics at Porsche AG. “These wishes and recommendations make a magnificent contribution towards workplace design, which benefits both product quality and working conditions.” Ergonomically exemplary assembly stations can be adjusted individually for each employee, for instance. To avoid monotony, the employees are involved in a large variety of work tasks and are trained in stages for the entire assembly process. Reimold: “The ultimate goal is to have the workers attain mastery of the entire engine.”

They are assisted by state-of-the-art machines and tools. Around 100 innovations were incorporated into the production system concept. For instance, Porsche implemented industrial transport vehicles that are user-programmable. The electric transporters, which are powered by lithium-titanate batteries, navigate over a grid network of 16,000 magnets that are mounted in the floors of the two plant levels. Their flexibility makes it possible to readily adapt production processes to potential product changes and new methods later on.

The EC tools are just as adaptable. Their presets for torque or speed, for instance, can be modified at any time via the electronic production network. This means that they are not limited to a specific place of use, but can essentially be used universally in assembly and only need to be mounted at the new work location – in production jargon they are “re-cycled” – and are then programmed for their new task. Moreover, ergonomically optimised tools make tasks easier for workers to perform due to their improved ease-of-use.

The assembly of a new engine begins every 3.5 minutes. 95 workpiece carriers transport the engines along the line designed in a U-shape that is a total of 432 metres long. In 110 work cycles, of which 71 are in the manufacturing areas, the eight-cylinder engine is produced in 6.2 hours. Porsche is increasingly making use of digitalisation and data management capabilities in its production process for the new eight-cylinder V-engines. Christian Will, Vice President Aggregate and Components at Porsche AG: “Around 2,300 units of data can be retrieved for each engine after it has been finished and tested. Any fluctuations in quality are detected very early at their onset and are prevented from having an effect.

The new engine plant, whose construction was started in early 2014, is located in the western expansion zone of the main Porsche production site. The building floor area comprises around 10,000 square metres. The factory is subdivided into two levels, with logistics on the ground floor and engine assembly on the upper floor. The multifunctional structure of the production area can be recognised by very few permanent architectural features that would limit flexible usage. The concept preserves the option of adding new thematic content and new products. Consequently, the partitioning and periphery of the new engine plant have been prepared for growth. The building was built in the northeastern zone of a 25,000 square metre land parcel that Porsche acquired as an expansion parcel. The three-story entrance area with offices and social spaces is along the front side, so that space will be available on the other side of the building for constructing expansion structures. Within the building, the architectural design reserves space for the installation of another work level on the first upper level.

Porsche is also achieving a milestone in terms of sustainability in the construction of its engine plant. The new construction is part of Plant 4, which is one of the first industrial quarters across Germany to receive a gold rating in its pre-certificate from the German Society for Sustainable Construction (DGNB). The building was evaluated based on 40 sustainability criteria. Among other things, a photovoltaic system on the building’s roof generates up to 242,500 kilowatt-hours of electrical energy annually. That represents savings of 105 metric tonnes of carbon dioxide that would be emitted by conventional electrical generation. Moreover, large sections of the roof are landscaped with plants and contribute towards improving air quality.

Porsche is growing more powerfully than ever with investment programmes

In past years, Porsche has invested more than 300 million euros in its main production site in Stuttgart-Zuffenhausen. Adjacent to the new engine plant, where there was previously a wiring plant, the company is planning to retrofit what was once a transmission production facility into central workshops. A new training centre for the youngest Porsche employees has been built on land that was previously a street car depot. In order to implement future projects and further develop downtown business sites, Porsche AG has expanded its land holdings in Stuttgart to over 600,000 square metres through purchases and has thereby more than doubled its land area.

In upcoming years, Porsche is planning additional investments of well over one billion euros, which will assure the resources needed to support its successful growth course. The primary innovation driver is the first battery-electric sports car. In Zuffenhausen alone more than 1,000 new jobs will be created for this product. The company is investing around 700 million euros in its main production site. The next few years will see the construction of a new paint shop and a separate assembly plant there. The engine plant will be expanded to produce electric drives, and the existing body manufacturing shop will be expanded. Investments will also be made in such areas as the Development Centre in Weissach.