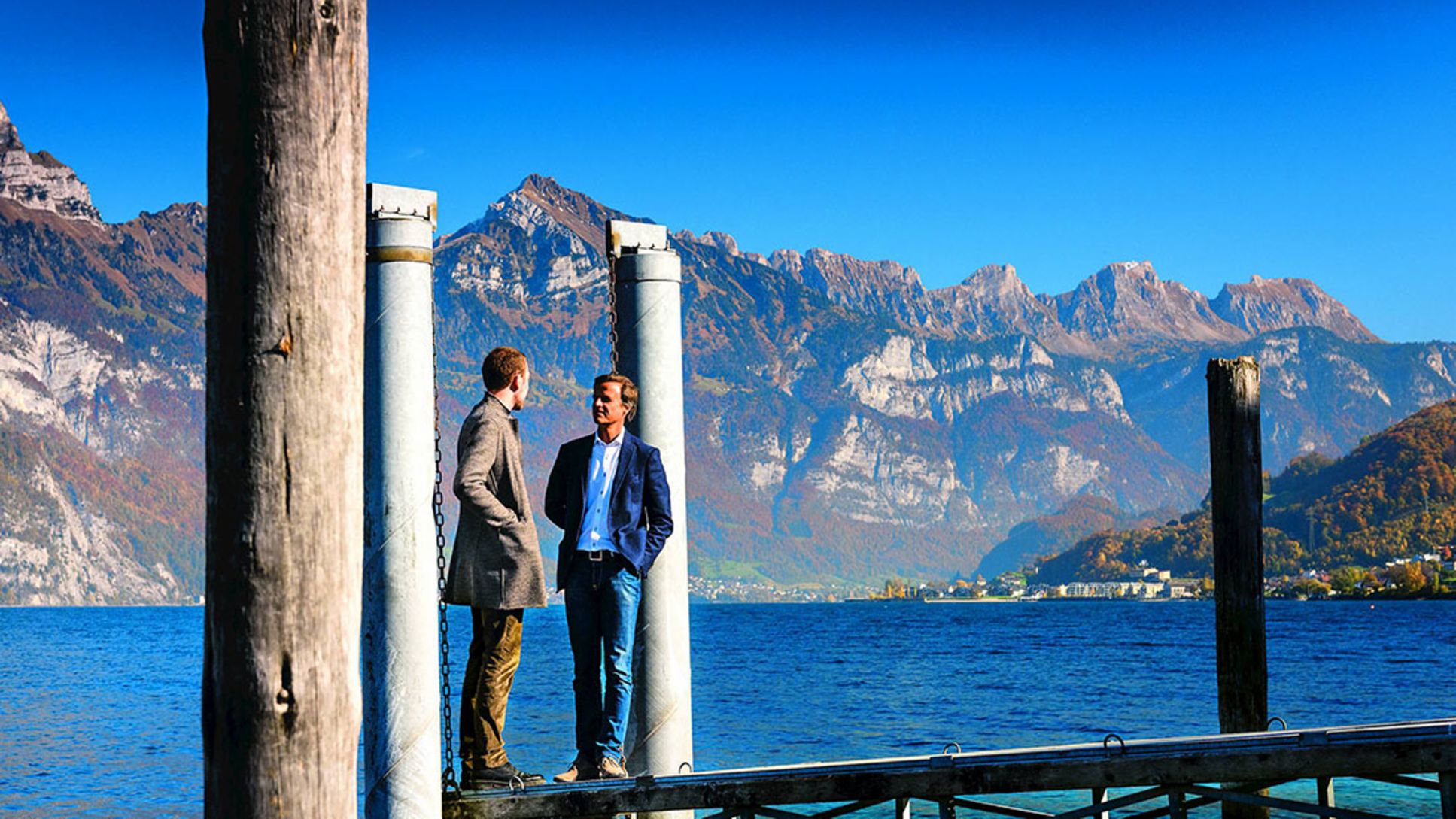 Michael Mauer’s style is making its mark on the contours of twenty-first-century Porsches. Switzerland is the wellspring of his creativity. A conversation with the Head of the Style Porsche, surrounded by mountain peaks.

This is a wondrous place. The sky is a deep blue, the sun skips across the reflection of the lake. Surrounded by the fjord-like craggy cliffs rising more than 1,000 meters skyward, this Swiss mountain lake imparts the essence of serenity. The area is familiar to winter-sports enthusiasts as a bottleneck en route from Zurich to Davos, Arosa, or the Engadine. Only a few travelers have discovered the treasures to be found in the shadow of the autobahn that winds its way along the azure lake on narrow avalanche protectors and through the tunnel: tranquil spots with small coves and even sandy beaches.

More sensitive souls might consider the steep mountain massif to be rather oppressive. But this is where Michael Mauer, a passionate sportsman, has found his oasis of tranquility. “One designer may get his inspiration from art, another may go on city breaks and fly to London every Friday after work,” he explains over coffee on the top floor of his home in a former factory, complete with a view of the lake and the mountains. “I see how we’re constantly being bombarded with information, which is why we have to give our minds more and more time to process all of this information. Whenever I’m here on the weekend and go skiing, ride my bike, hike, or simply sit on the deck for a couple of hours without thinking about anything particularly lofty, my subconscious uses this time to sort out information from the week just gone by, to process it, and to find solutions.”

Mauer views his profession as a dream come true

As Porsche’s chief designer, Michael Mauer is in no danger of running out of complex design issues demanding solutions. He must walk a fine line between an established identity and development, defining that line in visual terms—a deli­cate balancing act that determines not only the success of each new model but how it is perceived worldwide as well. Is Porsche still true to its principles? Is Porsche innovative? A single glance at the design must be able to answer these questions. Even today, Mauer views his profession as a dream come true. Upon completing secondary school, he first worked as a ski and surf instructor before studying automotive design in Pforzheim in the 1980s.

As a young designer at Mercedes-Benz, he created the first SLK: a personal milestone and an early statement of his purist, flat style. Following jobs at Smart and Saab, he joined Porsche in 2004 as head of the design department. His first project was the Panamera—a completely new model with no predecessor for comparison, and a showpiece that reflected the tension between brand and product identity. “Of course there are still some elements that are essential to our brand identity, which we intend to keep,” Mauer says as he glides a pencil across a sheet of paper with a practiced air. “For instance, the topography of the hood, which sweeps downwards so beautifully.” The Panamera’s front-mounted engine is not going to give you the same kind of roller-coaster ride that you experience with the Porsche 911, of course. Nonetheless, it has adopted the iconic curves of the Porsche car body.

Features that are part of the brand identity

The 911 is also the primary inspiration for the haunches above the rear wheels. “They are part of the reason why the Panamera is not a five-seater. We wanted to consolidate the cabin, and as a result the rear seats were moved closer together.” Dispensing with a radiator in front, as well as the sloping roofline, or flyline, also ensures the typical Porsche look. “There are four or five features that are part of the brand identity. The trick is not merely to incorporate these elements, but also to suitably reinterpret them in each model.” The designer doesn’t view brand identity as something fixed, something immutable, something that can be established by checking off items on a list.

“Familiar product identity features are changed as part of the development process for new models. The resulting change in the brand image can range from subtle to significant—at least visually. The front-hood graphic design of the Macan is a striking example of this. It embraces the entire front instead of running in the usual V-shape between the headlights.” A knowing smile plays over Mauer’s face. “Of course, you could argue about that till the cows come home: Will this be confined to the Macan product identity, or does it have what it takes to become part of the overall Porsche brand identity as well?” Design Chief Mauer, who was born in Hesse and grew up in the Black Forest, is not one to take a one-look-fits-all approach to every model.

“My opinion is no more than one particular point of view.”

Instead, he firmly believes that consistency requires that product identity remain in line with the basic shape of the automobile. “Proportion is our top priority,” says Mauer, “not to mention the second and third.” The 53-year-old smiles. True, it’s not the first time he’s joked about this, but he means every word. The proportions have to be right before any work on brand identity can begin. From Mauer’s perspective, designers are far more than packaging artists. Design begins early on, when the volumes are determined. “For this reason it’s important that we help influence this issue.” Mauer is drawing all the while. Focused, quiet, he pauses to take a critical look at his sketch before turning the paper to scrutinize it in the warm sunlight falling through the skylight into the room.

“Here’s a classic: you take a look at a sketch, and see that something’s not quite right—but you can’t say why, exactly. It often helps to simply change the angle and view the drawing from the other side.” It is these changes in perspective that are so characteristic of Mauer’s work. And that applies to his approach to teamwork as well. Today, his team numbers more than one hundred designers, model designers, and CAD specialists—and his aim is to regard his own point of view as just one of many options. “Naturally, our designers need a certain amount of direction, but that should be no more than a bit of guidance, in my opinion. Otherwise, we just stifle creativity. And my opinion is no more than one particular point of view.” Mauer still has to answer for each decision at the end of the process, but the design chief wants to encourage variety until that decision is made.

What a work of art

It’s just a few steps down to the lake. During the summer, the surfing school sets out tables there. On occasion, Mauer stops by to enjoy an evening aperitif and a view of the lake. A thrilling location, yet so unpretentious that you begin to see why the stylist—whose weekdays are spent in countless meetings—is so drawn to this place. Is a personal style really possible in a global car corporation like the Volkswagen Group? And if it is, what is it that marks the Mauer style? “I always want my cars to convey a feeling of rock-steady strength,” says Mauer. “To convey that you don’t need a myriad of lines and details to show them off to advantage. That their design is distinct—simple but full of suspense. And my hope is t­hat people will stand in front of them and say, ‘What a work of art, what a gem!’”

And in fact, the surfaces on a Porsche are more arched, more spanned out, more rounded, and softer than in many other brands, which are currently focusing on streamlined contours, hard edges, and emotive details. Mauer prefers the serene, almost sculptured look. That’s what he fought for—and he’s been proved right again and again. “When we designed the Macan, we left a completely plain surface between the taillights. But of course you need to feel tension there as well; otherwise it’s nothing more than a flat board.”

Mauer gazes across the lake, to the peaks of the Chur­firsten on the other side. “Somewhere out there, that’s where you’ll find the fine line between lack of imagination and genius.” The sun disappears behind the mountains; it’s getting chilly along the water’s edge. One final destination awaits; in Mauer’s Panamera we head for the other shore. The road, a series of steep hairpin turns, leads us upward some 1,000 meters to the green pastures above. Mauer likes sportiness—and makes no exception when he’s behind the wheel. He revs up the Porsche and elegantly threads his way along the winding roads. A completely different panorama appears before the side window: the sheer rock walls have vanished from view; the peaceful blue of the lake lies below. The gleaming mountain peaks, bathed in the evening sun, could easily grace a postcard.

The Mission E is pointing the way

In light of today’s traffic conditions and technological advances, many of the aspects that make a Porsche a Porsche—driving dynamics or engine sound, for instance—are quickly losing significance. To Mauer, that opens up new opportunities: “Modern technology enables us to turn the architecture upside down.” The electric Porsche Mission E is pointing the way. There’s the new front view. The design influence from the 911 is much more evident here than, for example, in the Pana­mera. “The reason for that is simple: the engine is no longer mounted in the front.” What elements of the current brand identity will characterize a Porsche five, ten, or twenty years from now? As a designer, Mauer believes that it is essential to question everything rather than assume that updating what we already have is the only approach.

“In my opinion, we designers will be even more involved in the planning process than we are today, with a greater focus on product strategy.” The sun is now vanishing—and with it, the surrounding mountains. Now, only the Panamera headlights hasten through the gathering darkness. Mauer enters a Stuttgart address into the navigation system. He’ll soon return to the mountains, where his skis will trace two skillful lines in the snow: a part of Michael Mauer’s brand identity. Michael Mauer, the man behind Porsche’s design of the twenty-first century. Each model bears his signature style—entirely unique in and of itself, and yet there’s only one car it could be: a Porsche.

The 917 KH Gulf on the canvas: Porsche in oil

Interview with Roman Miah who brought the Porsche 917 KH Gulf back to life – as an oil painting. 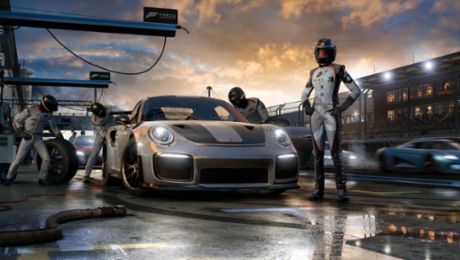 The developers of the racing simulation game have been working closely with engineers in Weissach. 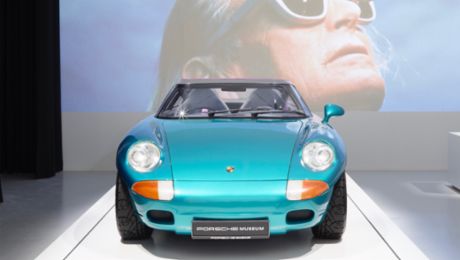 A museum in Qatar has dedicated an exhibition to the development of German design. 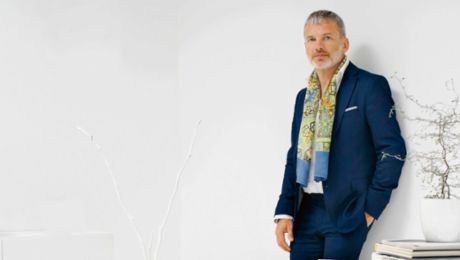 “We need more courage again in our choice of color”