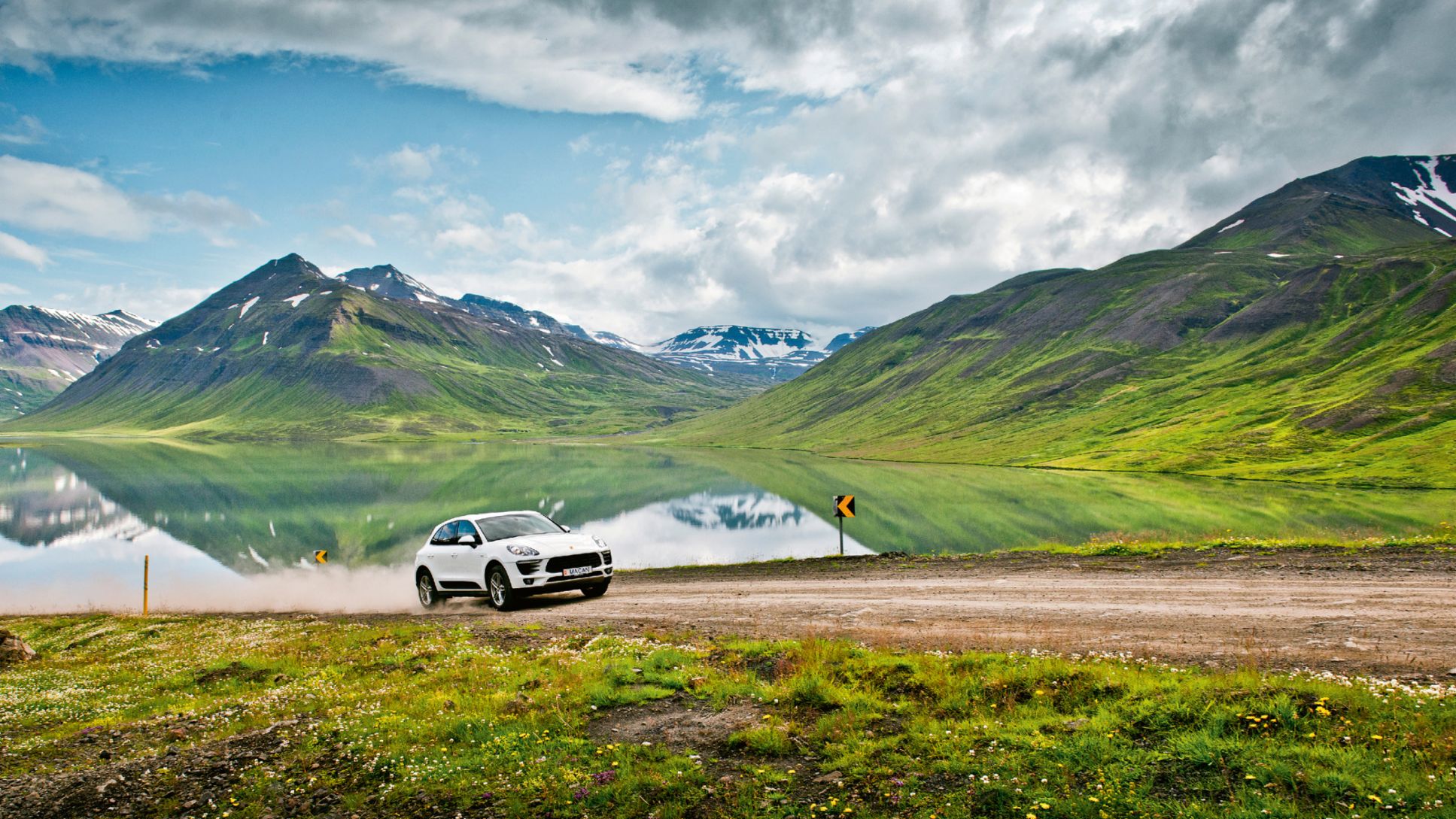 In the Land of the Vikings

Iceland is its own cosmos: a world of myths, extraordinary natural scenery, and passionate people. We visit Porsche Club Iceland on a journey to another world–even for our Icelandic author.

Our adventure in Iceland begins long before this story. It starts with Pétur Lentz, the president of Porsche Club Iceland. A pilot for Icelandair, he flies a Boeing 757 across the northeast Atlantic to Munich to pick up an acquaintance: the photographer Stefan Bogner. The two had previously worked together on a photography project that explored remote and remarkable places in Iceland. This time the focus will be on the local Porsche Club.

As clouds chase each other across the sky, interrupted alternately by rays of light and squalls, I arrive at Lentz’s house in Garðabær, not far from Reykjavík. There is nothing special about this weather; it’s just a normal day in Iceland. Stefan Bogner is in the front yard, sorting his camera equipment and waxing euphoric about the island’s breathtaking open spaces, clear air, and incredible colors. “The weather changes every ten minutes here,” he exclaims, looking around and expecting us to nod in agreement. We Icelanders all Club members except me–shrug our shoulders politely, but do not share Bogner’s sense of novelty. Yes, the weather changes here, often by the minute. Yes, open space abounds here, which is nothing new. Yes, the air is clear–at least until a volcano clears its throat.

Iceland is the second-largest island nation of Europe

It’s not that we Icelanders are unaware that the countless shades of green here send visitors into raptures. But we can’t keep telling each other every day how special our ordinary surroundings are. When we visit the Continent, we too are impressed by a number of things, but we tend not to dwell on them. Sometimes Icelanders are viewed as cool, or even standoffish–a widespread misconception, or perhaps simply a stubborn assertion made by all those who expect effusive displays of friendliness and superficial smiles of welcome in Iceland.

At slightly more than 100,000 square kilometers, Iceland is the second-largest island nation of Europe, after the United Kingdom. Green only in summer, it has many volcanoes, rivers, and lakes, plus slightly more than 330,000 people, of whom nearly 300,000 were born here. There is a sense of community in this country, with its mild winters and cool summers that rarely exceed 20 degrees Celsius. Cars are very important for Icelanders, by the way, on account of the vast expanses. Nearly 75 percent of the population drives on a daily basis.

“A vintage Porsche is a smart investment”

While Bogner is still describing the aerial views of the landscape during his flight with the Porsche Club president, and while I am reflecting on the importance of cars as a means of transportation on this sparsely populated island, the Porsche Club members have already gathered around their vehicles. They have planned an excursion, and the air is full of excited anticipation. Porsche fans one and all, they admit to only rarely taking their sports cars out of the garage and into the extreme weather conditions of any month outside of June to August. But today they are making an exception. The photographer’s visit and the good cheer of all present outweigh the rain and icy cold. “A vintage Porsche is also a smart investment,” says Sigfús Bergmann, the club’s vice president. The question arises, however, whether one can assign a numerical value to passion such as that shining in Bergmann’s eyes, or in fact whether one should even try.

Pilot Lentz brings my thoughts back down to earth. He drives up in his Porsche 911 Carrera 4 from the 964 series, completes a quick lap on the wet asphalt, and announces with satisfaction that the all-wheel classic car is a natural on slippery terrain. I settle into the brown leather seat, listen to Frank Sinatra’s “Moon River,” feel completely at home, recall the lyrics to the song from the cult movie Breakfast at Tiffany’s, close my eyes, picture myself as Audrey Hepburn, and dream. I follow Bogner’s gaze and begin to understand his enthusiasm for our island, with its emptiness and timeless mountains, with its moss and millions of grasses. For him it’s intoxication. For me it’s a mirror that reflects my homeland from a different perspective.

In a Porsche 911, speed cannot be reduced to a mere number

We continue on to Route 36, or Þingvallavegur, a road leading through a national park, which many consider Iceland’s most scenic route. Bright sunlight makes the wet ground shine and the horizon sparkle. Lentz accelerates, and the Porsche family follows in his slipstream. We drive into the wind, and I enter into the huge expanse on this empty stretch of asphalt that seems to go on forever, with Sinatra in my ears and the wind through the slightly open window in my hair. The landscape is green, the road is dark gray, and my face is tingling from droplets of icy mist. A look at the speedometer shows that we haven’t reached the speed limit of 90 km/h. When you’re in a Porsche 911, even speed cannot be reduced to a mere number. Lentz seems to read my thoughts and remarks, “Driving a 911 has more to do with the joy of curves than with speed per se.” And what is the appeal of the club, I ask. The president laughs. “It’s a feeling of togetherness. It’s about sharing the Porsche spirit.”

We stop at a fjord from which an amphibious vehicle suddenly emerges, and I climb into a white Porsche Macan S Diesel driven by Petúr Haraldsson. The Grafningsvegur is another road with spectacular views, even for me as a native: dark gray and black volcanic mountains in the background, mustard yellow ferns bowing to the wind along the road, flocks of birds above, and sharp curves awaiting us far off on the horizon along with more mountains in every conceivable shade of gray and green. Bogner, wearing a cap and scarf and with the collar of his jacket pulled up over his ears, takes photos from an old 911 Cabriolet.

We drive through Grafningur in the southwest, and then past Lake Úlfljótsvatn. Sunlight alternates with drizzle, and we plow through the occasional puddle on the asphalt. The cars become dirtier by the hour, and the temperature drops markedly. We stop at a tiny shop near the lake, and order some soup to warm up. Legend has it that we Icelanders like to eat marinated herring and boiled sheep’s head. But I also love soup, as do my companions.

We turn around. It’s time to return to Reykjavík. For me the excursion will end this evening in the capital city. Lentz and his friends, however, will set off on a three-day trip around the island. They’ll start by heading to the stormy north, which will provide excellent photo opportunities. They will spend three nights in three different cities: Akureyri, Egilsstaðir, and Kirkjubæjarklaustur. Their trip in a Porsche Macan will produce a series of images that reflect the powerful poetic spirit of the Icelandic landscape–and the play of lines on a Porsche SUV.

The northernmost Porsche Club was founded in 2006 by Pétur Lentz, and currently has more than eighty members. The founder continues to serve as its president. 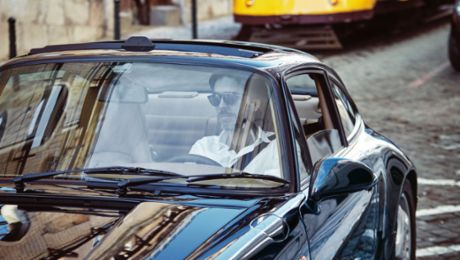 What moves Fernando Guerra is found in a garage in Lisbon: four classic Porsche models from the years 1973 to 1995.