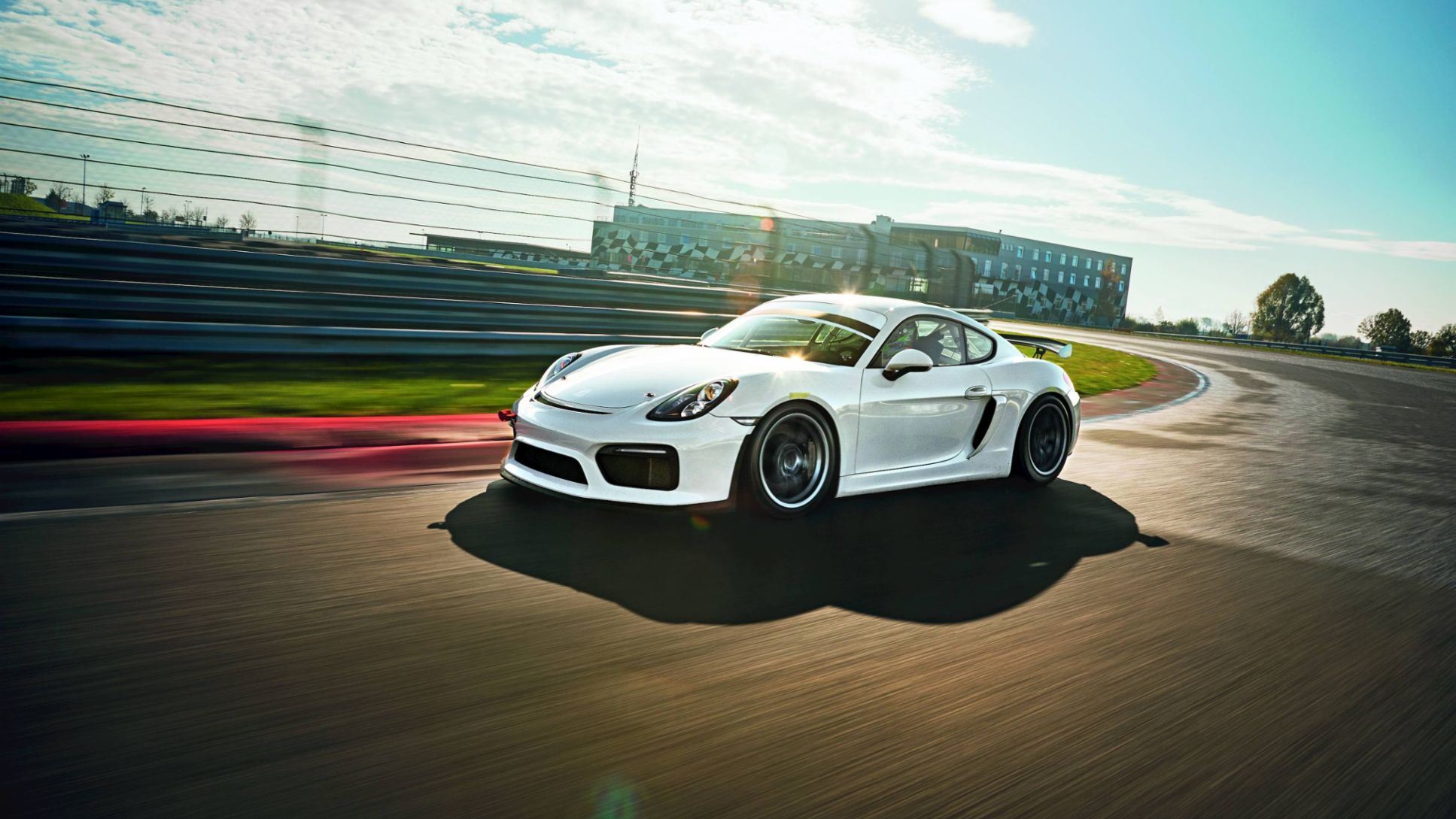 … everything else is just waiting. Hardly any other GT car embodies this quotation of Steve McQueen in the movie Le Mans as much as the Porsche Cayman GT4 Clubsport.

Successor to the Porsche 550 Spyder and the Porsche 904 Carrera GTS, this single-seat mid-engine coupe is used solely on racetracks and is thus predestined to run on racing tires. As a mid-engine two-seater car, the Cayman GT4 comes from the same stock as the 918 Spyder—and the current reigning world endurance champion, the 919 Hybrid. The configuration of its power train exemplifies the inventive spirit of the Porsche family. Ferdinand Porsche and his son Ferry created the first single-seat mid-engine cars in the form of the Auto Union Grand Prix racing car and the Type 360 Cisitalia.

Starting in 1953, the Porsche 550 Spyder then spread this design so successfully throughout the world that Cooper, Lotus, and Ferrari also started placing their engines right behind the driver. The Cayman GT4, which was introduced in 2015, can be considered a direct descendant of the Porsche 550—and probably the hottest successor to the legendary Spyder Coupé, whose superb aero­dynamics convinced Porsche to enter it in the 24 Hours of Le Mans six decades ago. The Clubsport is based on the road-going version of the Cayman GT4, which in 2016 has 283 kW (385 hp; Cayman GT4: Combined fuel consumption: 10,3 l/100 km; CO₂ emissions: 238 g/km) at 7,400 rpm, a curb weight of 1,340 kilos, and a six-speed manual transmission.

Production of the Cayman GT4 Clubsport follows the Porsche rhythm

The new Clubsport has the same lines as the GT4, a slightly modified rear spoiler, the same robust 3.8-liter engine generating 385 hp of displacement, a six-speed PDK transmission, and a top track speed of 295 km/h. It has slimmed down to a curb weight of exactly 1,300 kilos. And it features chassis components and brakes from the 911 GT3 Cup car plus an optimized mechanical locking differential. In other words, a package that would have pleased the company founder and his son. Production of the Cayman GT4 Clubsport follows the Porsche rhythm. The shell is sent to a separate production line, the components are mounted, and the car is finished in the motorsport department at the Weissach Development Center.

In this case, it means a lot is left out. The car has a single seat, with the battery placed in the footwell of the passenger side to enhance the weight distribution. There are no insulation materials, interior cladding, or luggage compartment, and the wiring is reduced. Actually, it’s a stripped car body in white, yellow, and gray. With a roll cage, racing bucket-seat, original instruments, and a racing steering wheel with carbon-fiber paddle shifters. Test-drives comparing manual and PDK transmissions showed the latter to be more competitive in spite of the added weight. As project director Matthias Scholz remarks, “Paddle shifters are used in racing cars these days so you can keep both hands on the wheel.”

Aside from its high-tech approach to shifting gears, the GT4 Clubsport is radically purist. Taken from the 911 GT3, its front axle further improves turn-in and high-speed stability. And the ABS and PSM were calibrated for the best grip on a wide range of racetracks in intensive tests. Additionally, the Clubsport has been lowered yet again to virtually scrape along the track, riding 29 millimeters closer to the asphalt in the front and 25 millimeters closer in the back than the street-legal GT4. Nonetheless, the focus of this extreme Cayman is not the electronics or control systems—insofar as GT regulations allow them in the various racing series.

The center of gravity lies in the center, as close to the driver as possible. A six-cylinder boxer engine mounted between the axles results in excellent agility. Powertrain, chassis, and steering feel directly connected. No other concept conveys driving conditions to the driver’s mind in so unfiltered a form. The GT4 radically challenges synapses and neuronal pathways to a point where exhaustion itself becomes addictive. By the end of 2015, each of the proto­types had clocked more than 17,000 kilometers  and 180 hours of driving time on different tracks, in order to provide the best-­possible car to experienced hands and gentlemen racers.

The fuel tank comes in three different sizes for different purposes: the 90-liter standard tank, a 70-liter version, and a 100-liter FT3 safety tank. The basic version of the GT4 Clubsport will race in the German VLN championship on the Nürburg­ring-Nordschleife, the British GT Champion­ship, the Porsche Sports Challenge, and the Continental Tire SportsCar Challenge. It will also enter the Pirelli World Challenge and 24-hour races on the Nürburgring and in Dubai. The international racing world likes minimalist, understated signs of rank. The Cayman GT4 Clubsport will of course be delivered in the Weissach white that is synonymous with speed, along with carbon-fiber accents in just the right places: the rear spoiler and Gurney flap, the inside door panels, and the front air collector under the hood.

And how does this race-ready GT4 drive in comparison to, let’s say, its street-legal GT4 brother, which is hardly a slouch? Markedly hotter, like chili peppers from southern Mexico. As the driver, you are belted, networked, and wired into the car. The six-point racing harness pins you to the thin bucket seat, which is bolted directly to naked steel. The steering wheel—small, grippy, and with carbon-­fiber paddles for the PDK—is the only means of communication with the outside world. The racing slicks respond to the slightest touch of the wheel and rapidly build up grip. As a mid-engine racer, the GT4 virtually flies through curves.

You brake, turn in, zip through, and accelerate—all in a single flowing movement. The Clubsport is even more agile than the street-legal version. Even more committed, more nimble, simply hotter than hot. And therefore perfectly spiced for the target group, consisting of ambitious young drivers in their first GT cars as well as the late-forties generation of gentlemen racers such as actor Patrick Dempsey. The Cayman GT4 Clubsport is available from Porsche Motorsport in Weissach and Porsche Motorsport North America. There are fittings for a fire extinguisher and pneumatic jack, which can be found on a short but select list of extras. Air-conditioning is optional. Not listed, but available of course for hardcore racers: doorsill panels with the inscription “W. Röhrl.” This legendary addition is rumored to save you a tenth of a second per lap. 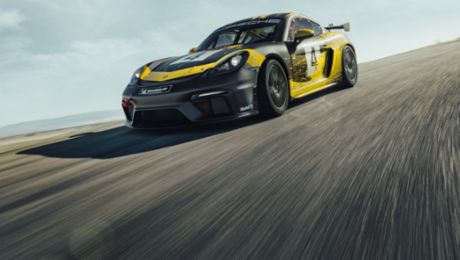 Uncovering the cornerstone of Porsche’s Le Mans legend – in the millionth 911. 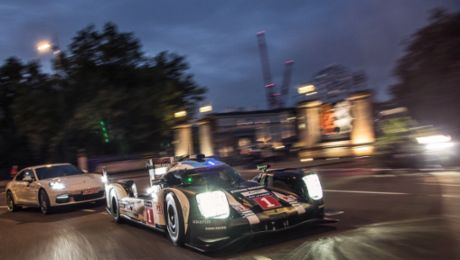 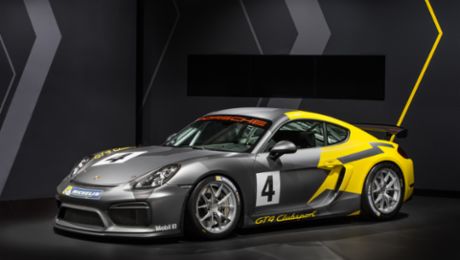 The Porsche Cayman GT4 Clubsport has celebrated its world premiere in L.A..