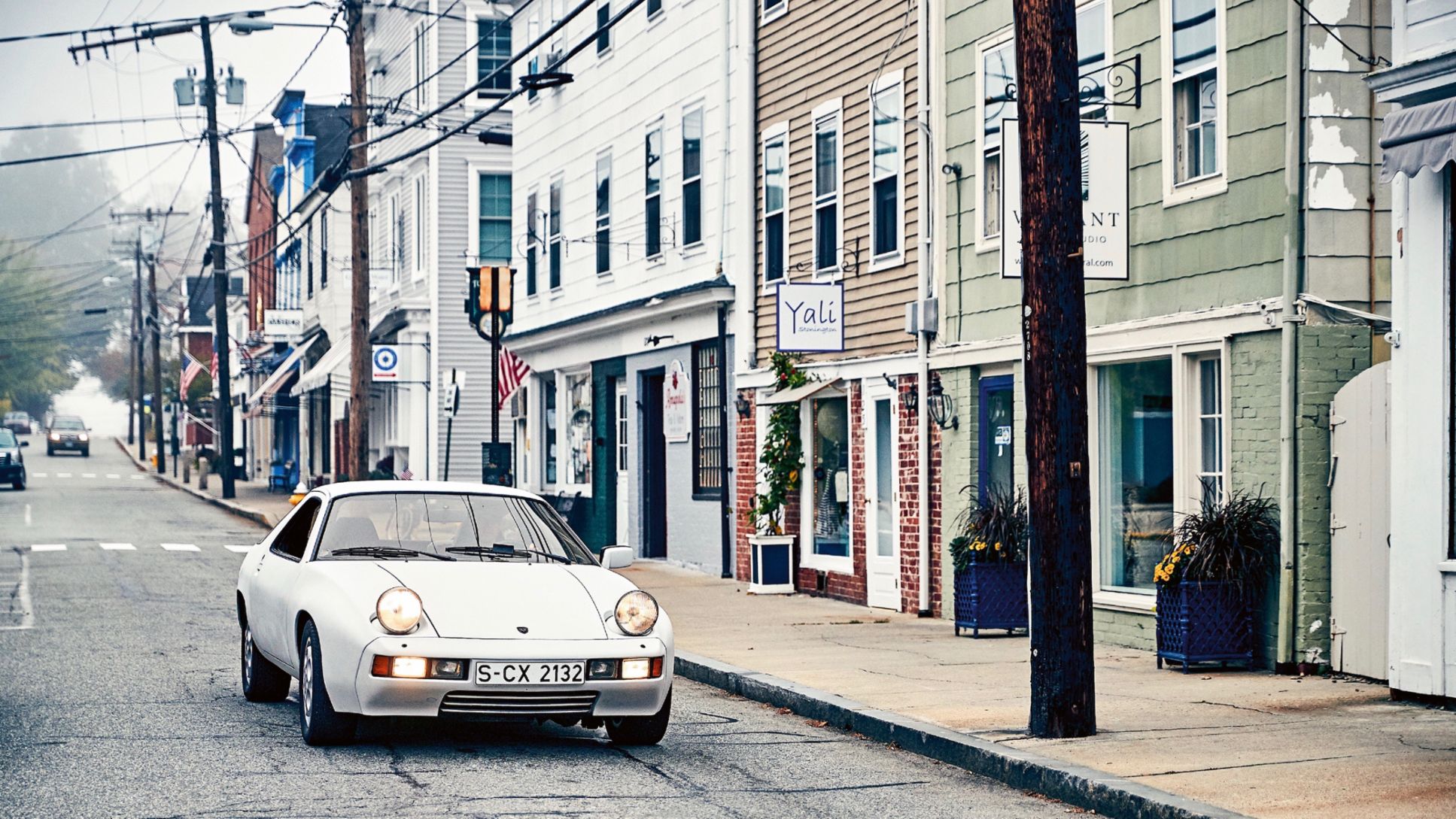 Spring of 1977: Porsche fans are shaken to the core when the brand comes out with its new top model, the 928. The car defies—and exceeds—all expectations.

“You cannot discover new lands without consenting to lose sight of the shore for a very long time,” said André Gide, French writer and 1947 winner of the Nobel Prize in Literature. Although Gide could not have known it, his quote beautifully captures the mood at Porsche in the early 1970s. What was going on in Zuffenhausen? The Porsche and Piëch families had just withdrawn from the company. In the United States, Porsche’s biggest market at the time, legislators were discussing new crash-protection regulations. And the Porsche 911 was seen as obsolescent due to the stricter emissions and safety regulations on the horizon. The winds of change were in the air, and a few individuals at Porsche started to tackle these changes in a comprehensive manner.

Ernst Fuhrmann, the new chairman of the executive board, favored a novel model concept—a radical renunciation of the rear-engine principle. He envisioned a sports car with the engine mounted in the front and the transmission in the rear, connected by something called a “fast shaft.” This distribution of the drive system components is known as a transaxle construction, and it was to be a defining feature of the Porsche 928.

The development started in February of 1972

The decision was daring, given Porsche’s tradition of rear-mounted engines, but “everyone was on board” when it was made, recalls Wolfhelm Gorissen, who directed the Porsche 928 project. Development started in February of 1972, and the engineers at the Weissach Development Center broke new ground in every way. The engine, derived from a water-cooled, 4.5-liter V8 racing assembly made of aluminum, became the first to appear in a European standard production car. The engineers gave the chassis a completely new passive-steering, rear-wheel suspension: the “Weissach axle.” The car body was a combination of steel, aluminum, and plastic. And the polyurethane bumpers—yet another absolute novelty—were completely integrated into the body. They easily passed the newly introduced impact (pendulum) tests, which didn’t allow dents at impact speeds of up to 8 kmh.

Bumpers hardly seem radical today but, at the time, they brought the engineers, designers, and of course project director Gorissen to the brink of despair. It wasn’t just a matter of their complex, elastic mount. In particular, the paint job presented a challenge. “At that time, we simply didn’t have a paint that could cover steel, aluminum, and polyurethane equally well,” Gorissen recalls. “There were different shades wherever you looked.” The right paint for the job had yet to be invented—and it was, just in time for the series production.

While engineers were working on hundreds of little details in their quest to gain every possible centimeter and lose every possible kilogram, experts from the testing department were taking each successive prototype to its physical limits. The nearly ideal 50:50 weight distribution between the front and rear axles, the large-volume V8 engine, and the sophisticated suspension created expectations of first-class performance, at least on paper. But the 928 actually outstripped all expectations. Gorissen recalls those nighttime test-drives in the Black Forest very clearly: “It was winter. Some of the roads were icy, and it looked like a real challenge.” But the drivers climbed out of the car as cheery as could be after their excursion. “The car drove a full class better than the 911 of that time.”

The 928 was something different right from the start. Above all, it was positioned higher on the market—as a sporty touring car, or Porsche’s first Gran Turismo. The new car had four seats, although the two rear ones were not designed for long rides. It also felt extraordinarily spacious and had a capacious trunk. The car was considered large at the time, although it seems incredibly compact by today’s standards. “No other V8 sports car is so flat and elegant,” said Harm Lagaaij, Porsche’s head of design from 1989 to 2004. And he planned to drive “at least three 928s” in his free time.

The 928 seemed to glide rather than roll on the road. It generated significantly less noise than the air-cooled engine of the 911. It handled much more agreeably and offered outstanding comfort: The air-conditioning system cooled the glove compartment; the height of the steering wheel and seats could be adjusted; and drivers could also adjust their pedal positions, foot rest, and gear shift. The windshield wipers had a separate tank with a dedicated dosage pump that sprayed a special cleaning agent onto the window from time to time to keep the glass free of streaks. And finally, the car had a specially designed “Porsche cassette radio with excellent reception qualities and clear, user-friendly controls.”

The 928’s world debut at the Geneva Motor Show in March of 1977 was a sensation, and the public was thrilled. According to Der Spiegel, “Former Volkswagen head Rudolf Leiding bought one at once—for his wife.” The magazine also noted, “No other car has played a more crucial role in Porsche’s highs and lows than the 928.” In other words, this completely new, incredibly modern, and timelessly elegant sports car clearly had everything it needed to take on the legacy of the 911.

But events turned out differently, as we now know, forty years on, even though the Porsche 928 was the European “Car of the Year” in 1978—the first and only sports car to have received that honor—and even though it was continuously improved and upgraded. Its output increased from an initial 240 to 350 hp in the final evolutionary stage of the series (the 928 GTS built in 1991). Production of the 928 finally stopped in 1995, after a total of 61,056 vehicles had been built.

Lagaaij has never stopped admiring the car’s design language. At some point in the conversation about its timelessly elegant aesthetics and coherent concept, he says something that seems to echo the words of André Gide: “The 928 was like a new continent in the Porsche world at the time.”

The fifty-one-year-old from Connecticut is the proud owner of the first Porsche 928 ever built. Eleven 928s, starting with chassis no. 9288100011, made their world debut at the 1977 Geneva Motor Show.

“As a teen, I would sit in front of the TV set, which is where I first encountered a Porsche 928: on The Six Million Dollar Man. I was smitten immediately. So far, I’ve owned around twenty Porsche 928s. But this particular 928 is something very special. I bought it from Jim Doerr, an enthusiast from Michigan. He first discovered it in 2011, relatively unloved and forsaken, in someone’s backyard somewhere in Michigan. The body was dotted with around forty holes and a number of special parts had been installed. But the original engine was still intact, as was the original paint job: Grand Prix White. I signed the deed of sale on February 22, 2017. That was the very same day, some forty years earlier, that the 928 must have left the factory in Zuffenhausen. On the following day, February 23, 1977, eleven new Porsche 928s made their world premiere. There’s scarcely a gap in the car’s documentation. In 1979 Porsche sold it to a private citizen in Hamburg. By 1983 the 928 was back in America where, because of import regulations, the original tachometer was replaced with one that indicated miles per hour. It now has almost 150,000 kilometers under its belt. I know what a treasure I have. Sometimes I take a seat next to it in the garage and wish it could talk about what it was like back then.”

Born in 1940, Clausecker became a suspension expert and joined the 928 development team shortly before the car’s premiere. He was involved in testing winter tires—and in making the only factory race car of this model type.

“I joined the testing team about a year before the 928 was introduced. We were focusing on winter tires and running tests in Austria near the Turracher Höhe Pass and on frozen Lake Falkertsee near Bad Kleinkirchheim. To see how it handled, we drove to the Nürburgring or the Contidrom near Hanover. Thanks to its nearly ideal weight distribution, the 928 was much less problematic to drive than the 911. I thought it was extremely good-natured and found it to be a wonderfully comfortable touring car. My colleague Günter Steckkönig and I both thought this car would be an ideal candidate for the European Touring Car Championship. As a matter of fact, we received authorization to proceed; the 928 was ready to go in 1983. It did well at the Veedol Endurance Race on the Nürburgring and at the 24 Hours of Daytona as well. But unfortunately, it didn’t meet the requirement for the European Touring Car Championship of five thousand production cars sold in a year. That put an end to the dream of a racing career for the 928. More than thirty years went by before the 928 race car was resuscitated by Porsche apprentices and two Porsche retirees—Günter Steckkönig and me. Now the car is back, at the stage it was before its first race in 1983.”

After studying design and automotive body construction in Hamburg, Kasten promptly joined Porsche in 1970 at the age of twenty-three. He worked on the 928 from the start, first as an interior designer, then on the exterior and as an assistant to studio director Wolfgang Möbius.

“I joined Style Porsche in August of 1970 and started working on interior design under Hans Braun, who was the director at the time. The future sports car soon became the big project, and everyone thought it should defy the zeitgeist and break with the usual wedge-shaped, angular bodies. It should look completely different: more organic, more modern, ‘Porschier.’ I think that’s why the 928 still has an interesting and timeless aesthetic to this day. My first job was to put Hans Braun’s design for the interior into practice. Completely new features included a cockpit that could be adjusted in tandem with the steering column and a central console that rose up to the dashboard and nearly enfolded the driver and front passenger. I transferred to exterior design in late 1973. The biggest challenge there was integrating the bumpers into the body, which had never been done in a car. The problem was that these bumpers had to meet new and very strict U.S. crash regulations, which took an enormous amount of development work. We finally came up with an excellent solution. But that was only possible because we not only designed a completely new sports car but also established an entirely new type of cooperation between engineers and designers at Porsche.”