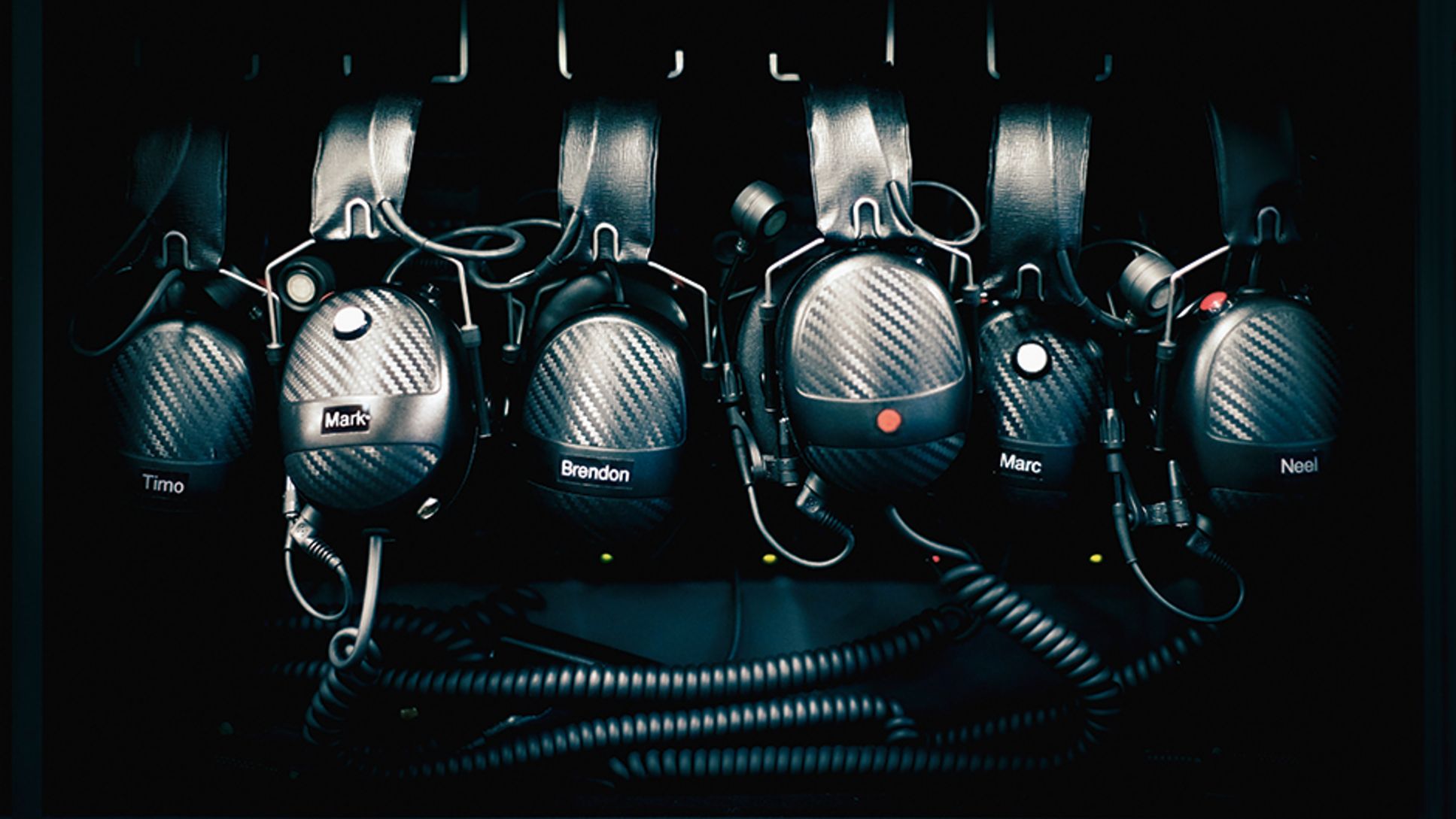 During the race the team in the pit is in continuous contact with man and machine. It’s high-tech communication with strict rules.

On the racetrack you have to be ready for anything. That means keeping an eye on the technology at all times. Every second. Suddenly a bar on the diagram disappears. The voltage has dropped to zero. Emergency. The engineer on the telemetry monitor in the pit knows that the Porsche 919 Hybrid is now running only on its combustion engine. Now the key is instant communication—between all involved.

The engineer who is monitoring the telemetry for the hybrid system sits together with thirty other highly specialized graduates of technical universities in the engineering office behind the scenes in the pit. He presses the intercom button and connects to the race engineer in the command station along the pit wall via the internal radio channel. He receives the alarming news from two sides and in two ways at the same time: calmly from the engineer and desperately from the driver Romain Dumas. The watchwords in the pit: stay calm. Clear-headed analysis is of the essence. What happened? What can we do?

Short commands go back and forth between race engineer Mathieu Galoche and the experts in the background. “Emergency shutdown.” “Start backup program.” The language is always English, the common denominator in the multinational team. In complete sentences: the emergency stop program shut off the high-voltage system, and the driver has to restart it using a button sequence on the steering wheel. He hears nothing of the commotion of the intercom discussion—he has to stay focused.

The team has identified the cause and the situation: after a rough ride over a curb, a fuse was blown that is intended to ensure that the electricity shuts off in case of an accident. “Okay,” says Galoche as he resumes contact with Dumas. “We have the solution. You have to do the following …” He explains to Dumas how to hit “Alt+Ctrl+Delete” to reboot the car on a steering wheel with over twenty buttons on it, and do so in the middle of the race.

It works. “Copy,” comes the confirmation from the car. The engineer on the telemetry monitor has already seen that it worked. The bar is back. He informs the race engineer of completion via intercom.

Communication between the race car and the pit works like this: the Porsche 919 Hybrid is equipped with hundreds of sensors. They measure the remaining fuel in the tank, hydraulic pressure in the system, oil temperature, brake temperature, the gas pedal position, and voltage, and record vehicle behavior when breaking or steering. The engineers see all. But that doesn’t mean they can act directly on that knowledge.

One-dimensional telemetry—the car sends data to the pit—is the permitted standard. Bidirectional telemetry—engineers taking action on the car—is prohibited. That’s why the voice communication is key. Who speaks with whom? In order to not distract the driver too much, he is addressed by a single person only—the race engineer. Each vehicle has one, and he sits in the command station along the pit wall. The race engineer, by contrast, receives a wealth of information. The team of engineers keeps him abreast of the state of the vehicle and the behavior of competitors. The strategy engineer discusses suggestions about the current situation with him, and the crew chief wants to know if the tires need to be changed at the next pit stop and, if so, which set of tires should be put on.

The race engineer must have an cool head. His radio channels are not prioritized—he hears everyone speaking at once. And he needs to ensure that he never misses the driver’s voice. When the driver radioes that the vehicle behavior has changed, the tires are deteriorating, or a defect seems to be in the offing, the need for action is immediate. But all in good measure!

When the driver reports that the slicks are no longer appropriate for the coming rain, the race engineer has to make a decision in seconds. If the satellite images from the engineer monitoring the weather indicate that it’s only raining on that section of the track and the rain will stop shortly, and if the colleague monitoring the competition simultaneously informs him that the other teams are already pit-stopping to put on rain tires, it can pay off to reassure the driver and have him stay on the track. “Keep the car on track, rain will stop soon, don’t worry, you are doing well, mate.”

Pushing your luck is part of the game

The sonorous voice of Stephen Mitas, the race engineer for car number 20, coolly disguises the stress. And yet, there’s always a bit of risk involved. Pushing your luck to squeeze out every last second of advantage is part of the motor-racing game. Just to be sure, the race engineer calls the crew chief and mechanics: “Get ready for car number 20. Full service. Fuel, tires, and driver change.” Brendon Hartley dons his helmet and slips on his gloves. Tire set number four is ready for action.

The race direction listens in. If a driver radioes “Blue flag, blue flag!” from an LMP1 car—the top class in the World Endurance Championship—he is claiming to be impeded in an attempt to lap another car. The race direction then has to ensure that the car being lapped is actually shown the blue “move over” flag by marshals and that the driver, if necessary, is penalized for ignoring the signal. Sometimes, to entertain viewers, the banter between the driver and the race engineer is broadcast on television. But some codes are comprehensible only to the initiated; after all, the competition is listening too.

Modern communication in endurance races means hour after hour of full concentration for all involved. Always being on. In the debriefing—now without headphones and in relative peace and quiet—the team retraces every step. What is needed to make the preconditions for automatic deactivation of the system more precise? And how can it be reactivated as quickly as possible? At the end of the discussion, the abbreviation “Strat” stands for strategy, followed by a two-digit number. A new radio shortcut has been born.

Text first published in the Porsche customer magazine Christophorus, No. 368