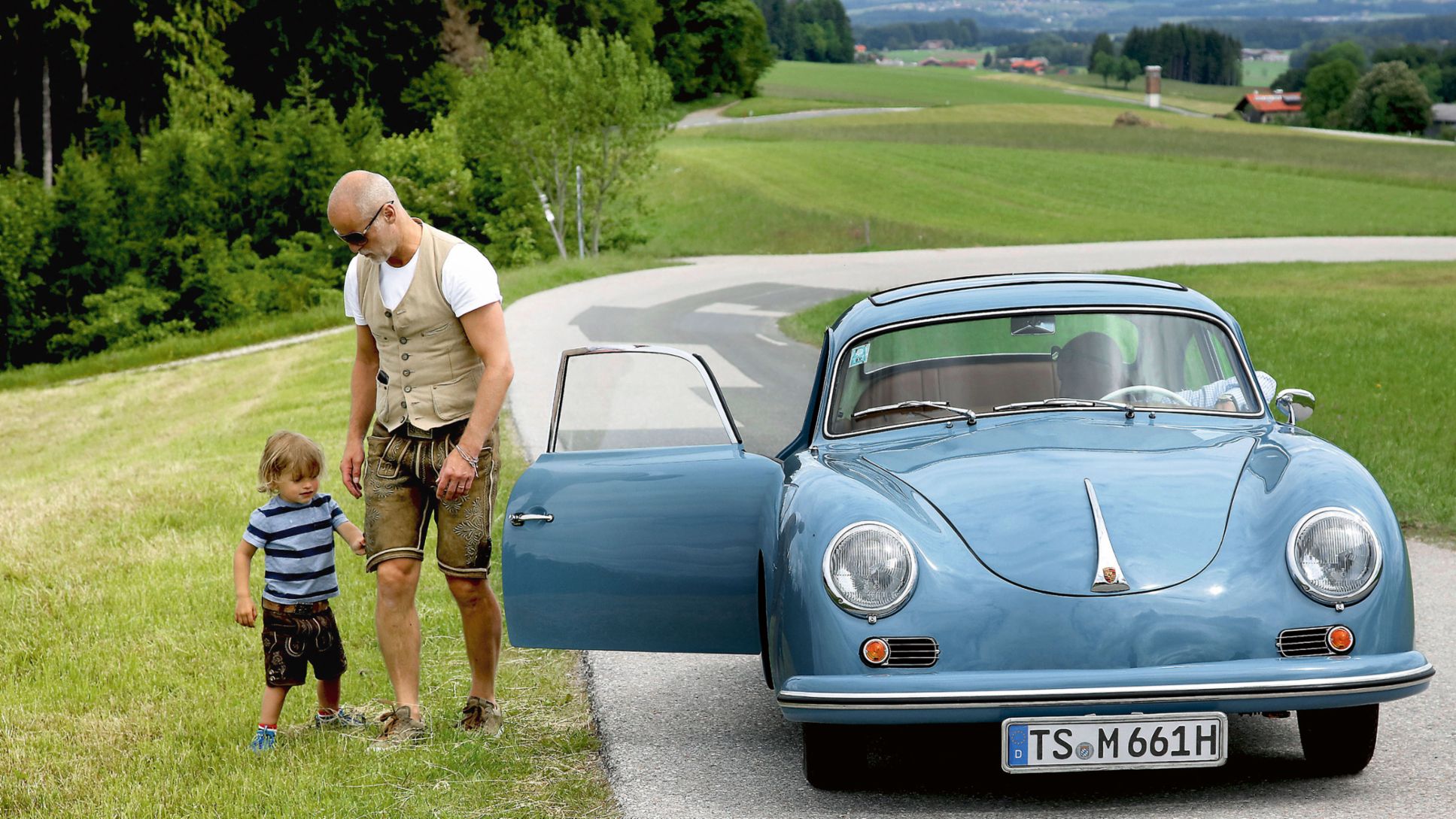 Traditional lederhosen have made a leap from niche product to cult item in recent years. But what has suddenly turned these traditional short leather trousers into bestsellers? Their makers—and two costume researchers—reveal some of the secrets.

“It has to be done with love,” says Suzanna Gallowitsch, the embroiderer. A piece of leather lies in front of her, dark as black tea and marked with white lines. Gallowitsch’s nimble hands stitch bright green thread over the soft hide. A few hours later, three stags in high relief look ready to leap off at any moment. Sometimes the embroiderer might devote several days to a single pair of lederhosen.

Close to the Austrian border, the Upper Bavarian town of Kirchanschöring has a population of 3,200. Life here follows a very special rhythm. Not only because time seems to pass more slowly than elsewhere, but also because the leather attire made here by Meindl, a company steeped in tradition, is designed to be timeless. Meindl makes lederhosen the same way it has for the past hundred years—which means many hours of meticulous work by hand. Just one pair of these superb lederhosen can cost around € 2,500. Yet they sell like hotcakes. Overseas customers are known to visit Kirchanschöring in person for a tailor-made pair of lederhosen, says company head Markus Meindl.

Lederhosen have been enjoying a spectacular renaissance for a number of years now. Long dismissed as provincial, these short leather trousers generally made of deerskin have become a sought-after item of apparel, and not just for occasions like Munich’s Oktoberfest. “Lederhosen have arrived in everyday life,” says Munich-born ethnologist Simone Egger, who teaches at Austria’s Alpen-Adria-Universität in Klagenfurt. An expert in cultural studies, Egger has devoted considerable attention to the Wiesntracht phenomenon. With a nod to the Theresienwiese, which is the site of Munich’s Oktoberfest, this term describes the increasing appeal of clothing like lederhosen and dirndls. Why have lederhosen become a lifestyle product? Egger sees a deep longing of our mobile society for identity. “Values like homeland and tradition invariably become more pronounced when worldwide levels of mobility, not to mention uncertainty, are on the rise,” she explains. Lederhosen have always evoked the romantic ideal of life in the country and a sense of connection to one’s homeland. And the fashion freedom now in vogue also contributes to their popularity. “You can wear anything these days,” she remarks. “Strict rules of attire no longer apply. That too has helped lederhosen break out of their niche into everyday life.”

There’s no end in sight to the rise of lederhosen. Players on the record-setting FC Bayern soccer club wear them when they celebrate their championship titles on the balcony of Munich’s Town Hall. It has become de rigueur for Bavarian secondary school graduates to receive their diplomas in the robust leather legwear. And during Munich’s Oktoberfest, fondly known as the “fifth season” of the year, the Lufthansa airline puts some of its flight crews into dirndls and lederhosen. The hype draws on longstanding associations that adhere to the shorts as tenaciously as their decorative flat-stitch embroidery. Lederhosen stand for earthiness, virility, and pride in alpine traditions. A pair seems to transform its wearer into the very picture of vigorous masculinity. That’s because deerskin evokes a time when men earned their living with hard physical labor under rugged outdoor conditions.

This explains the persistent notion that lederhosen were originally what men in rural areas wore when they worked. “There’s no historical evidence for that,” says Alexander Wandinger, who directs the Trachten-Informationszentrum (traditional dress information center), which is located in the former stables of Benediktbeuern Abbey in the district of Upper Bavaria. The center has a collection of more than five thousand pieces of traditional dress. Standing under the pillared cross vault, Wandinger holds a pair of short lederhosen from around 1890 wrapped in tissue paper. The black leather is decorated with elaborate embroidery—a Bavarian treasure. “Lederhosen like these were simply too valuable to wear for work,” says the expert as he removes the gloves used to handle pieces from the archives. “The rural population only wore them on special occasions. The nobility, however, were hunting in fine leather trousers as early as the eighteenth century.”

Wandinger has spent decades studying traditional costume. So he is familiar with all the legends, including the unfounded ones. For one thing, lederhosen are not as old as widely believed. “Short leather trousers only became common in mountainous regions after 1800,” he says. That was when the Bavarian House of Wittelsbach, alarmed by the French Revolution, sought to play up their affinity with the common folk by wearing dirndls and lederhosen. In 1853 King Maximilian II, a great friend of national dress throughout his life, ordered that it be specifically preserved and promoted. Town and community halls were to display pictures of national costumes, and teachers and students were required to wear them on feast days and for examinations and award ceremonies. “When traditional costume societies were founded in the 1880s, lederhosen experienced a boom that has continued to this day,” explains Wandinger. A major figure was the schoolmaster Joseph Vogl, who founded the Verein zur Erhaltung der Volkstracht im Leitzachthal (Association for the Preservation of Traditional Costume in Leitzach Valley) together with his regular drinking companions in the village of Bayrischzell. This group could well have provided the key impetus for the popularity of lederhosen.

In monarchist times lederhosen were also a remarkably democratic piece of clothing—but in no way an egalitarian one. While a farmer would have to be satisfied with a single decorative seam, a king could afford nine of them. The richer the embroidery, the wealthier the owner—and that hasn’t changed to this day. The Meindl company offers hundreds of different motifs, and its embroiderers can individualize them for an additional fee. Grapevines for a vintner, for example, and all kinds of elaborate monograms—nearly anything is possible.

“The cool thing about lederhosen is that anyone can wear them, and there’s a version that makes sense for everyone,” says Egger. “Someone might want a hand-tailored pair made of deerskin from Tegernsee Valley, and someone else is pleased with a favorably priced secondhand option.” Of course, she also recognizes the subtle differences that serve to differentiate classes of wearers. “You quickly notice when a pair is of high-grade quality,” she observes. “In many parts of society the lederhosen have to come from a certain price category for their wearers to belong to the group.”

Overall, Egger notes that greater value is being attached to regional production and traditional craftsmanship. An authentic pair of lederhosen is traditionally made of deerskin, tanned using the same technique as that for making chamois. This technique, which uses fish oil, takes three months, as opposed to a chemical chromium process that takes only a few days. Once the skins are tanned, wood stains are brushed into them by hand. The leather is sorted by quality, then cut, sewn, and embroidered. Many hours of handwork go into each step. And each piece of buckskin tells its own story—of the fights the animal had, of the thickets it pushed its way through. An element of heroism is always present.

Maybe that’s part of the fascination for lederhosen. They are heroes’ attire, full of life, made for life’s every occasion. And that’s not all—they also generally last a lifetime.

Dahoam
The Bavarian version of the German daheim means both home and homeland. Dahoam is Dahoam is not only the title of a television series—it also describes a Bavarian way of life.

Hock di hera, dann samma mehra.
“Come sit with us, then there are more of us.” In Bavarian dialect, it rhymes nicely and reflects the warmth typical of the region.

Host mi?
“Do you hear me?” A quite direct and often rhetorical question as to whether the listener is of the same opinion.

Do schaugst
Da schaust du jetzt aber (roughly “Now, that caught your attention”): a common way of implying that one’s companion is not quite as knowledgeable or foresighted as oneself.

Jeffrey Docherty blends playfulness and hidden meaning with a passion for lines and historical racing cars into works of Porsche art.