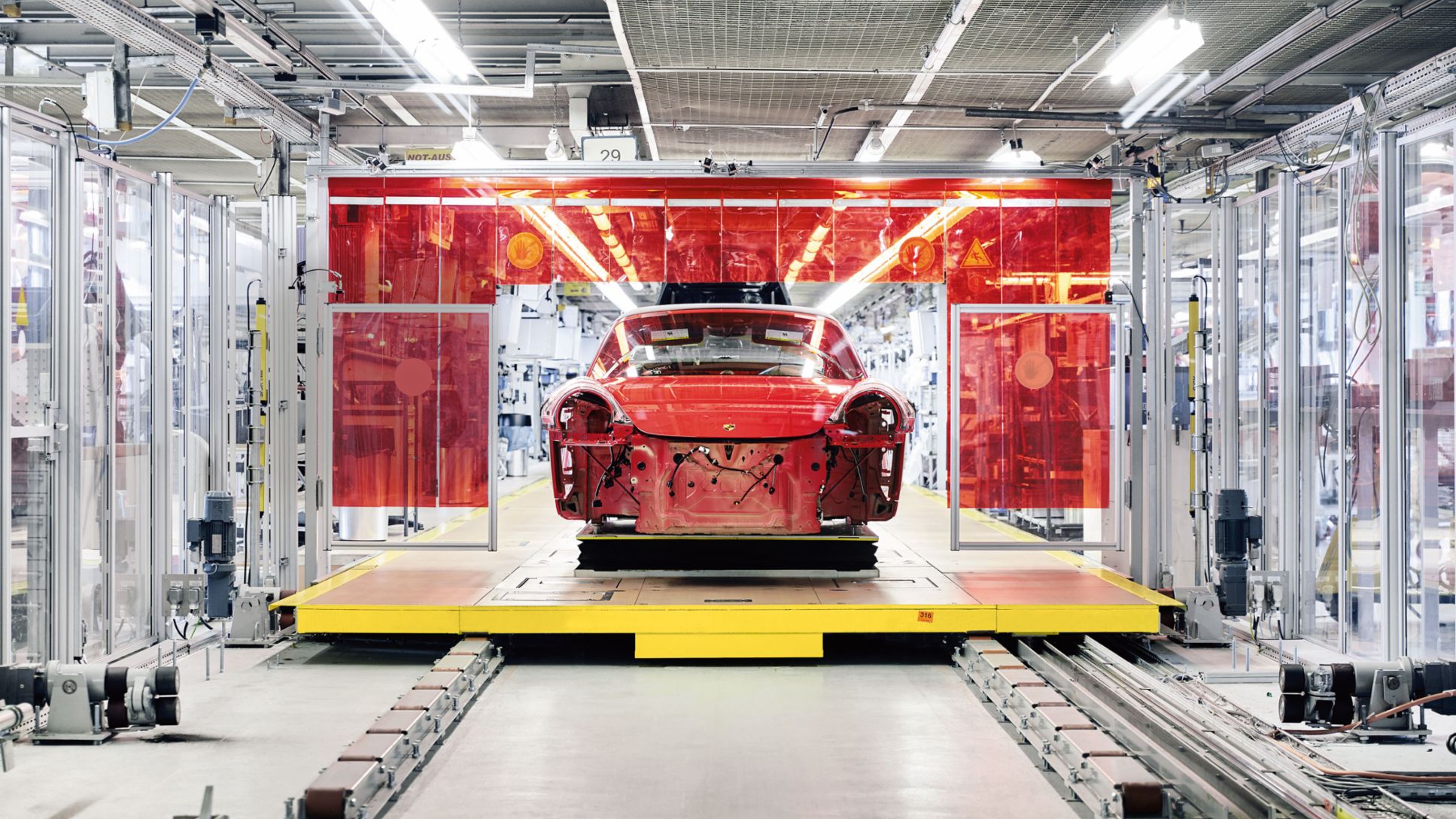 The Porsche 911 that rolls off the production line right before the one millionth in the series is red instead of green.

It’s a historic moment: Dr. Wolfgang Porsche is waiting, everyone else is waiting. Finally cameras start flashing and a green Porsche rolls from the line. The one-millionth 911 is here. There was a car before this one, of course: number 999,999. It missed entering the history books by a hair. Bad luck! Or perhaps not? We take a subjective look at narrowly missing the limelight and the happiness that comes with it.

No fanfare, no glamour, no showers of confetti. Probably no one even clapped when the 999,999th Porsche 911 rolled from the line—a red Targa 4 GTS. This information is almost ridiculously irrelevant, because it’s just a normal car (insofar as a 911 can ever be normal). The very last forerunner, the deep breath leading up to the big event, the moment of calm before the huge hoopla breaks out as the millionth of its type finally rolls from the line. The spectacle was long anticipated. If cars had emotions, the red number 999,999 might feel like the talented opening band whose music gets half an ear at most amidst casual chatter and the clink of glasses as everyone waits for the headlining act that brought them there in the first place.

Close, but no cigar. That may be the case, but it would be a big mistake to view this “near miss” state of affairs as something negative. True, no one rejoices if they fail to win the lottery because they favored thirty-one over thirty-two somehow for murky psychological reasons or chose nine instead of eight because of their birthday. Except for the proverbial horseshoes and hand grenades, it doesn’t matter a bit how closely one misses one’s goal. It’s like missing a train. What’s lost is lost, gone is gone, regardless of whether it’s by ten seconds or an hour.

What life on a rotating center stage means for a car is brilliantly conveyed in the movie Ferris Bueller’s Day Off. Ferris is a teenager with a talent for truancy. He has a friend named Cameron, whose father has a—sorry—Ferrari 250 GT California Spyder, a 500-hp machine, which he never drives but keeps in a glass pavilion like a very chic prison cell (where it’s meticulously polished every day). Finally, however, Ferris and Cameron take the car for a joyride where it truly belongs: on the open road. Granted, the car doesn’t survive the end of the film, but at least it was driven. It was a car and was allowed to be more than a polished statue or an abstract number.

Narrowly missing the big number robs you of glamour—but grants you freedom. That makes the 999,999th 911 the one that got away. Number 1,000,000 is the museum piece, the collector’s object, the auction item. Number 999,999 is the fine-but-underestimated car that rolls away just before the commotion breaks loose, out into freedom and a wild, real life.

Life of a libertine

The second step of the winners’ platform may not be what single-minded fighters set their sights on. On the other hand, it might not be a bad deal to exchange some fame for the good life of a libertine who’s free to follow the desires of the heart. If you’ve ever secretly (or not so secretly) watched America’s Got Talent, you know that a runner-up can take the world by storm while the winner fades into obscurity. Have you heard of Michael Grimm? He won the fifth season but hasn’t made a splash since. Jackie Evancho, who finished second that season, is practically a household name. If literature is more your speed, you might be familiar with the famous line from Shakespeare’s Henry IV, Part 2: “Uneasy lies the head that wears a crown.” One would add, by extension, that those who don’t wear a crown have broader horizons to explore. Which is why—speaking of crowns—some people would prefer Harry’s role to William’s.

All the horrendous, paralyzing expectations lie heavy on the number one. They’re also the reason why New Year’s Eve parties are invariably less fun and more contrived than the impromptu affairs on days one proceeds to forget, while the memories of the parties live on. The same applies to the furor that accompanies milestone birthdays. All too often these occasions feel awkward and stilted, like a stiff suit collar, in contrast to the carefree celebrations of turning twenty-nine, thirty-nine, or forty-nine, which enjoy a “phew-still-have-another-year” flair. The round number of an age often prompts guests to make overly zealous comments. They constantly want to know how one feels and what plans one will now be making. There it is again, that tedious pressure and troublesome hype.

Life, after all, isn’t a round number, and is only rarely the stage for a perfectly timed appearance. It’s full of dents, uneven bits, and all manner of near misses. Sometimes the road is a little rough. But above all: a car isn’t meant to sit under the bright lights of a museum but instead to zoom through this gloriously mixed-up and imperfect life. For instance, to southern France or some other marvelous destination in this world of ours. In the red Targa’s case, that destination turned out to be Canada. Have a great trip, number 999,999!

Rob Tenuta, a fifty-one-year-old contractor from Woodbridge, Ontario (near Toronto), is the owner of the 999,999th Porsche 911. “This is my third Porsche. I got a Cayman in 2006 and a 911 Turbo in 2011. When I heard that my Targa 4 GTS would be such a special car, I said to myself, ‘This baby’s a keeper.’ As it so happens, this was the first time that I had a car configured to meet my wishes. Otherwise, I buy cars on a very spontaneous basis, acting on impulse. I’m delighted to be getting this 911. It makes absolute sense that Porsche would keep the millionth one for itself. The one just before it is in superb hands with me because I have no special plans for it. I look forward to driving the Targa with the roof down under the open sky. I’ll take my first joyride in the GTS with my father; I promised him that. My wife’ll forgive me. We’ve been married for twenty-five years.”

The Porsche 911 is the heart of the brand, a timeless icon of style, and the epitome of a sports car for everyday use. The one-millionth 911 recently rolled from the production line at Porsche’s headquarters in Zuffenhausen. Dr. Wolfgang Porsche, chairman of the Supervisory Board of Porsche AG, has witnessed the development of the 911 from the very start. “Fifty-four years ago, I was allowed to accompany my father on the car’s first drives over the Grossglockner High Alpine Road. I love the feeling now as much as I did back then. Thanks to the 911, the core values of our brand are as visionary today as they were in the first Porsche 356/1 from 1948.” No other sports car embodies this symbiosis of success in racing and pleasure in everyday driving like the Porsche 911. It has posted more than fifteen thousand racing victories for the company and over the decades become a coveted collector’s item. More than 70 percent of all the 911s ever made are still roadworthy today. The one-millionth 911, an Irish Green Carrera S with exclusive special features that recall the first 911 F models of 1963, will remain in the ownership of Porsche AG. After a world tour—including road trips to places like the Scottish Highlands, the area around the Nürburgring, the United States, and China—it’ll be displayed at the Porsche Museum in Zuffenhausen.