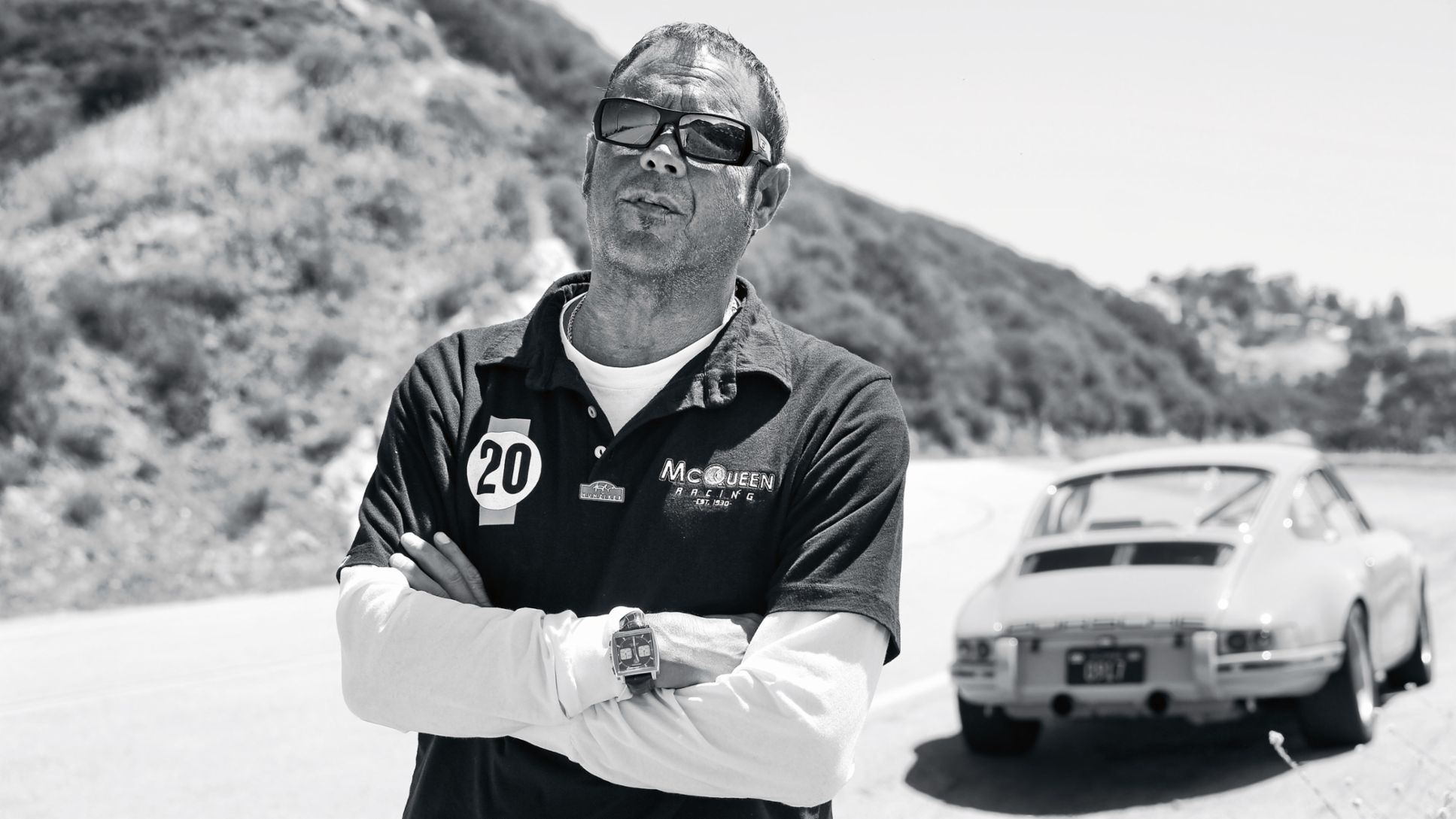 Chad McQueen keeps a special testament to his love for his father Steve.

Le Mans, 1970: Steve McQueen, the King of Cool, weaves his sky-blue Gulf Porsche 917 with start number 20 through the accident-strewn landscape of the twenty-four-hour race. The actor, amateur race-car driver, and motorcycle junkie is the leading man in the silver-screen drama Le Mans, but he’s not the only McQueen on the set. Nearby, a ten-year-old boy in a racing go-kart does lap after lap on a track encased in hay bales: Steve’s son Chadwick Steven, or Chad for short. He, too, is battling for victory. While his father, in the role of Michael Delaney, loses his spectacular duel against the second Porsche 917 Gulf, Chad triumphs in the kids’ challenge as his sister Terry looks on.

“Terry and I spent four months at Le Mans, often at the shoots themselves, and regularly on the go-kart track,” he recounts. They had breakfast with the likes of racing stars Jo Siffert, Derek Bell, and Rolf Stommelen and befriended Siegfried Rauch, who portrayed their father’s on-screen rival Erich Stahler. Chad especially remembers doing a lap in the cockpit of the Porsche 917 while sitting on his father’s lap. “My father’s love of racing was infectious,” says the fifty-six-year-old. As a young man, Chad McQueen also wanted to become as renowned an actor as his idolized father. His most famous role was in The Karate Kid, but major success as an actor would elude him. He reflects wistfully: “Sometimes acting talent seems to skip a generation.” So the young McQueen dedicated himself to motorsports instead.

His most fervent wish from those carefree days of childhood in France in 1970 stayed with him for decades: one day he would enter Le Mans, the real twenty-four-hour classic, as a driver. The dream died on January 7, 2006, on the racetrack at Daytona Beach in Florida. In the corner before the last straightaway, he lost control of his Porsche 911 GT3 and rolled over several times. Since then, screws and steel plates have stabilized his spinal column. “Porsche defines my life,” says McQueen with a laugh. He sits behind the steering wheel of his slate-gray 911 S and thinks back to the day in 1968 when his father came home with this car: “I heard the engine and dashed out.” The color and model inspired his father’s idea for the intro of Le Mans. In the opening sequence of the film, Steve McQueen as Michael Delaney drives through the idyllic French landscape, turns off toward Le Mans, and finally stops at the track. His thoughts flash back to the events of the previous year’s race, in which he caused the fatal accident of his racing colleague and friend Piero Belgetti. Then the scene cuts. The current race begins. And he’s back in the thick of it.

In 2011 the Porsche from the film sold for nearly one million euros. The real McQueen 911 that the actor owned and drove in his private life is still parked in the family garage. For Chad it’s like a treasure chest full of memories of his father. He explains: “There are many moments stored up in this car.” Excursions with Dad. Chad McQueen still regularly visits many of those shared favorite places today. He leans forward and pulls the original vehicle registration out of the glove compartment. On the back of the paper, ages ago, his sister Terry drew a little red heart—for Dad.