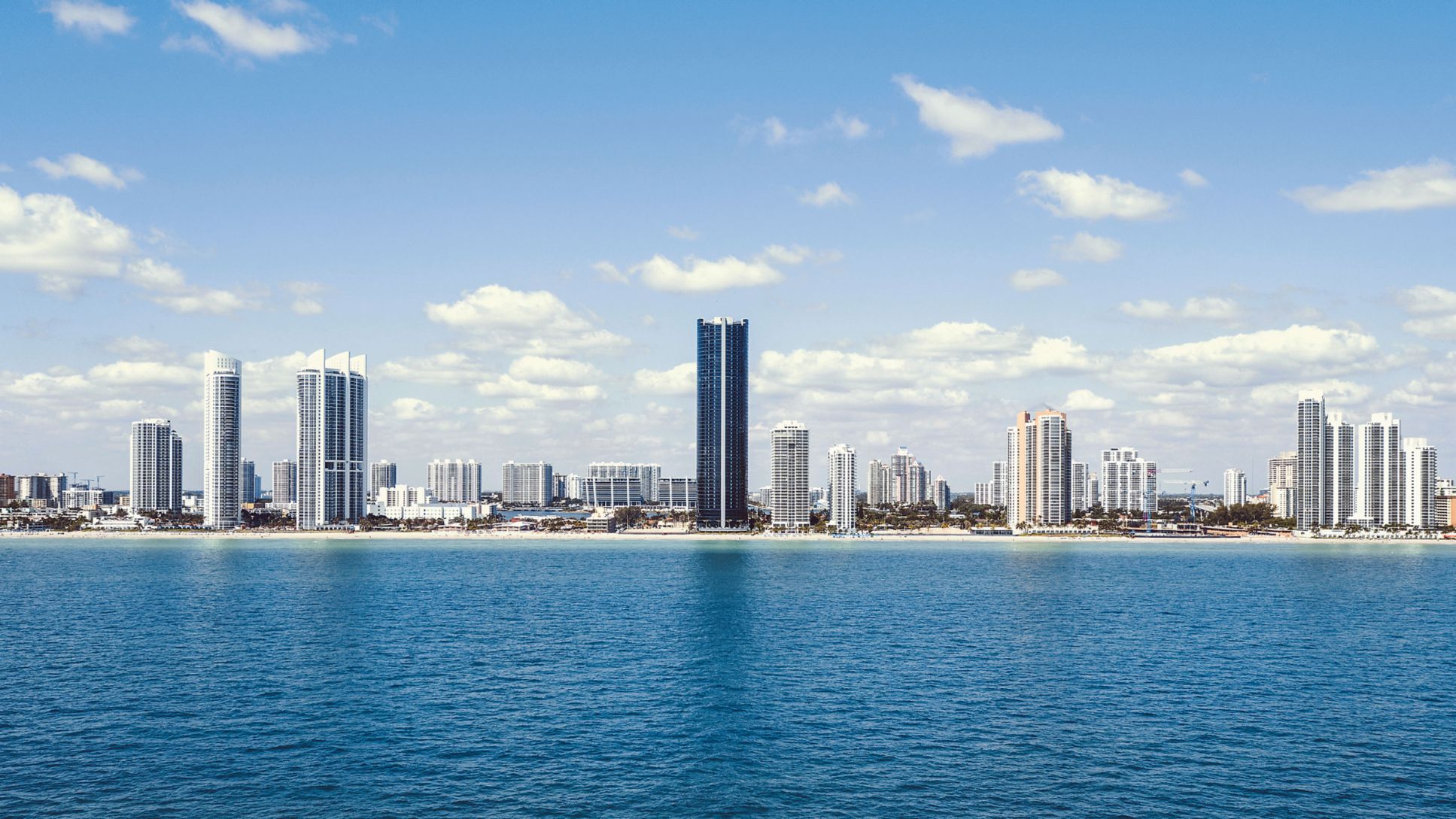 How will we live in the coming decades? Three central trends have emerged for urban living. We make a house call to the future—and take a car to the fifty-sixth floor to do so.

The desire of most people to live in cities and the ongoing lifestyle revolution driven by digitization will play a major role in shaping how we live in the future. Urbanity and technical innovation, however, can have very different influences on the way people live and define their immediate living spaces. Three trends in how we live stand out: luxury cocooning, green living, and smart homes.

Need an example? Done. In an apartment building, on the fifty-sixth floor, a Porsche Panamera glides out of the glass elevator and rolls directly into the apartment. The car, the epitome of mobility, becomes a spectacular home sculpture: a stunning, if temporary, interior design element. If necessary, the sports car disappears back into the elevator, floats down to the ground floor, and rolls from the square in front of the building onto the avenue. The transition between living and moving, real estate and mobility, becomes a seamless one.

Having one’s car right next to the kitchen and bedroom—it’s a dream come true for the residents of the Porsche Design Tower Miami in Sunny Isles Beach. The dark glassfacade soars two hundred meters into the Florida sky—the tallest building around. Sixty stories high, the elegant cylinder is home to 132 lofts starting at 390 square meters of living space. The apartments—nearly all of which have been sold—are generously dimensioned refuges, and the tower’s two penthouses each encompass a stately 1,800 square meters of space and four floors. The view of the Atlantic through the floor-to-ceiling windows is breathtaking. The design of the apartments in the black, gray, and stainless steel triad that typifies Porsche Design is an unmistakable nod to the overall aesthetic of the company, for the building is its first foray into the residential real estate business.

The car as key to the apartment

For Jan Becker, CEO of the Porsche Design Group, the Tower embodies the DNA of the exclusive lifestyle brand founded by Ferdinand Alexander Porsche in 1972: functional design coupled with technical innovations. Equally clear is the dominant role played by the car in the Porsche Design Tower Miami. Each apartment has a minimum of two parking spots, and the cars themselves take on the function of the apartment key as they “drive up” to the apartment in the elevator.

But starting a combustion engine on the fifty-sixth floor is an absolute no-go. So a way had to be found to move the cars into the elevator and from there to the parking spots without using the cars’ own propulsion. The solution is a system that transports the vehicles on tracks. The three elevators in the center of the tower complete the entire vehicle transport process, including the loading and unloading time, in less than two minutes.

Home is the perfect haven

What the apartments of the Porsche Design Tower Miami offer residents is a home and lifestyle experience first described at the end of the 1980s, when futurist Faith Popcorn coined the term cocooning to describe a retreat into private space, with the home as the locus of life. Luxury cocooning as offered by the Porsche Design Tower Miami is the logical progression: with a spa, Vichy shower, cinema, golf simulator, yoga studio, and individual wine cellars, the search for the ultimate, personalized luxury experience reaches its culmination here.

“We yearn for the security of that imaginary locus of longing called home, which can give our restless souls strength and something to hold onto—an anchor in the complexity of life,” writes the Frankfurt-based Zukunftsinstitut in its new trend study 50 Insights—Zukunft des Wohnens (Future of Living). It doesn’t suggest, however, that this retreat is associated with an escape into the solitude of the countryside, for example—on the contrary. “Urbanization is sexy,” the study says further on. The institute’s CEO, Harry Gatterer, speaks of an “age of urban optimism” and prophesies: “Cities are continuing to attract more and more people. By 2050, 70 percent of the global population will live in cities.”

The rural conquers the city

Because the available space in cities is limited, people build upward—or at least they have since the beginning of the modern era. But, because the desire for natural things remains unabated and health consciousness is on the rise, we see another trend taking shape: green living. In the film Metropolis, director Fritz Lang depicted the emerging urbanization at the outset of the twentieth century as a dystopia, a scenario of decline. “Yet today’s major urban centers are greener and more diverse than ever,” says Gatterer. The rural is conquering the urban because the majority of people want to live in cities, yet still harbor a longing for the natural world. Urban forests are growing skyward, such as the Bosco Verticale in Milan, an architectural milestone that brings the local recreation area and the yard to right outside apartment windows through the clever arrangement of verdant terraces. The merging of city and nature, of stimulation and the slowing down of life, is the logical result of a thought experiment that brings together the modern demands of human existence. After all, there can be no doubt that experiencing nature enhances quality of life. Rooftop terraces become fields for cultivating and balconies are now flowery meadows. The motivation here is not primarily trying to save the world but enjoying one’s place in it.

The home, whether “smart” or conventional, is the epicenter of personal well-being—the difference is that in a smart home the living experience is fully automated. The household of the future? A network. Not so long ago, a smart home enabled remote control of blinds, light, and heating. Nowadays, the smart home learns more and more about its occupants to make their lives more convenient: it selects the right music for the mood of the moment or the films for a movie night at home, sends the vacuum cleaner robot out for a spin, runs the bathwater, and has the refrigerator reorder food items as necessary. But there are skeptical voices as well—will technology soon take over the task of living itself? The Frankfurt futurologists see limits: the heart of a successful home is always the living relationships between the people in it. And the truly smart home of the future will tie all of these intelligent devices into this context of vibrant home life.

From this point of view, the self-determined combination of passion and life is the most intelligent future form of living. Just as in Miami, where the view of nature and the expansiveness of the ocean is combined with smart technology to transport the car into one’s personal living space. Welcome home. Welcome to the present of the future.

“It’s about the spectacle”

Saskia Sassen on the city as a haven and center of one’s life:

How do people want to live in the future?

We’re observing that cities have once again become the most desirable place to live. That cuts across all population groups. The most interesting thing about it is the growing interest in medium-sized cities. One of the reasons for that is that large cities are often extremely expensive. Another factor is that medium-sized cities are now often considered more interesting than the large ones. Ultimately, what people want is the “cityness” factor. And every city center has that.

What exactly does that mean?

Glamorous jobs that attract young people, start-ups, art and culture, restaurants. There’s really no such thing as the perfect city—they’re all open, unfinished, odd. But therein lies their charm as well. This imperfect, and in many cases problematic, quality offers space for the unexpected. As the sociologist Georg Simmel recognized early on, this social differentiation fosters the development of the individual. The individual is alone in the anonymity of the city, but is also strong! And as philosopher Walter Benjamin once said: It’s not just about you and your friends. It’s about the spectacle. That’s the important thing about the city.

So what should be done?

The idea is to create an intelligent city, but not through total mechanization or digitization. An intelligent city is a functional city. We need personal networks and places to meet—and this means analogue ones, not digital. For communication and encounters between people—let’s call it a spectacle—the possibilities have to be created.