Not many people can claim to be as successful carrying a bag of golf clubs as Craig Connelly. The Scotsman has made it. That’s no wonder, as Connelly is one of the world’s best caddies. Christophorus spoke with him about one of the greatest wins of all time—and the occasional lost opportunity.

Credit-card roulette is a common practice in caddie circles. Like at Ponte Vedra Beach in Florida, home of the Players Championship, a major international golf tournament. Craig Connelly (40) is enjoying dinner at a steakhouse with colleagues. When it’s time to pay, the group decides to leave that responsibility to chance. Everyone puts a credit card into a bowl, and they ask the waitress to close her eyes and draw them out one by one. The owner of the last card will have to pay the entire bill. Today, Connelly’s card is the last one drawn, and that task falls to him. That’s the rule. He pays, without grumbling. He doesn’t say how much. Although he likes to talk, he’s hardly loose-lipped, and he doesn’t reveal any details about the life of his employer. The most important maxim in Connelly’s business is that to be a good caddie, you have to be discreet.

Man for the job

“I wanted to be a professional golfer myself,” says Connelly, who showed talent with clubs and irons as a boy growing up in Clydebank, a working-class town near Glasgow. Here one should note that in Scotland, the birthplace of golf, the game is not a privileged pastime for presumably wealthy individuals, but rather something like a national sport. Connelly’s mother was a teacher, and his father managed a restaurant. They both encouraged the hobby of the eldest of their three sons as much as possible, but Connelly soon realized that with a handicap of four, he was not about to embark on an international career in golf. He wanted to remain active in his beloved sport but didn’t want to teach it, so he decided to become a caddie. For eight years he accompanied female golf pros on tours throughout Europe and the United States. He carried their bags, cleaned their clubs, handed them balls, calculated distances between the balls and the greens, and advised them on which clubs to use, all the while hoping that the players would pass the first two rounds of each tournament and thereby make the cut. If they didn’t, they wouldn’t receive anything for their efforts, and neither would the caddie.

You have to bring a certain gambler’s mentality to the job. Unless, of course, you hit the jackpot and are hired by a player who almost always goes home with serious prize money. The most well-known and likely wealthiest caddie in the history of the sport is New Zealand native Steve Williams, who worked with Tiger Woods from 1999 to 2011. Williams had his own marketing contracts and is said to have earned US $12 million on the golf course for twenty-five to thirty weeks of work a year.

Trial run at a tournament in Germany

“I wouldn’t have minded working with Tiger Woods,” says Connelly with a laugh. His first job at the side of a male pro was in 2004 with Paul Casey—not a bad choice, either. A native of England, Casey was one of the “young guns” bringing spectacular play to the course. He and Connelly met at a wedding. “We played golf and celebrated together—that was a wonderful weekend.”

A few weeks later the Englishman gave the Scot a trial run at a tournament in Germany. It went well, and the duo took third place. “I thought that was all,” says Connelly, “so I headed back to the Ladies Tour in the USA.” Two weeks after that, he got a call. Casey wanted to hire him for the Ryder Cup, golf’s most prestigious team tournament. Every other year, it pits the best pro players from Europe against those from the United States. In 2004 the tournament was held in Detroit, and the Europeans, under captain Bernhard Langer, outclassed their American rivals with a record result. Since then, there has not been a single Ryder Cup without Connelly. He entered two more with Casey, then switched to the German player Martin Kaymer, with a short break at the side of Scottish golf legend Colin Montgomerie.

Rise to the top

The partnership with Kaymer launched the most successful period in Connelly’s career. He had won numerous tournaments with Casey and risen to third place in the world rankings. With Kaymer, he won two major titles and climbed to number one in the world. Kaymer winning The Players Championship and then the U.S. Open within the space of five weeks in 2014 meant serious prize money for Connelly  (US $ 3.42 million). Connelly was also awarded Caddie of the Year and received a percentage. How much? “Well, people always say ten percent, but that’s not true,” he says, declining to answer directly. “It’s less than that, but I’m not complaining.”

Connelly’s greatest dream is to win his favorite tournament: the Masters in Augusta. The victor receives not only a considerable sum of money but also the famous green jacket. Kaymer, however, has had his difficulties with that course—he has seldom performed well on it in the past. “But we’re moving closer to the jacket,” assures Connelly. “Last year, Martin managed to pass the cut…. Joking aside, I know that he can play even better there and also win the Masters.”

Kaymer can already thank Connelly for a timeless victory. At the 2012 Ryder Cup, his caddie analyzed the slopes, gradients, and grass qualities, as well as the distance, direction, and position of the ball vis-à-vis the flag, so precisely that a key putt by Kaymer gave the Europeans a victory over the U.S. team in what became known as the “Miracle of Medinah.” The dramatic action on the final day of play enabled Europe to defend the Cup. Of course, things don’t always work out that beautifully. And even a top caddie like Connelly can make a mistake, like in 2015 when Kaymer came close to  winning the Italian Open. “I advised him to use a shorter iron to go for the flag on a par five,” he says with a grimace. Kaymer missed the green, lost a stroke, and didn’t win. “I make mistakes just like everyone else,” says Connelly. “But I do my best to learn from them.”

Porsche is entering its third year as the title sponsor of the European Open. With prize money of € 2 million, the European Open is one of the most prestigious tournaments on the European Tour, the continent’s highest level of professional golf. After two years at the Bad Griesbach resort, the European Open will be held in Hamburg this year, from July 27 to 30. The Hanseatic city is known for its love of golf, and the event will take place at the Green Eagle Golf Courses, on one of the continent's longest and most challenging courses.

Porsche is active on many levels in the world of golf. It started its Porsche Golf Cup customer series back in 1988. In addition to sponsoring the professional tournament European Open, the company launched an innovative amateur nine-hole tournament called the Porsche Generations Open in 2016. For more information on the 2017 Porsche European Open, visit www.europeanopen.com. 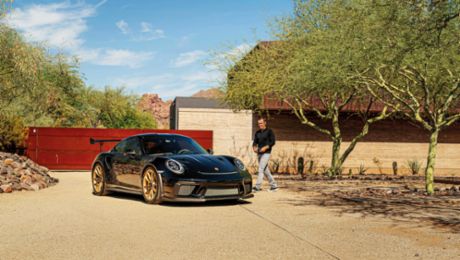