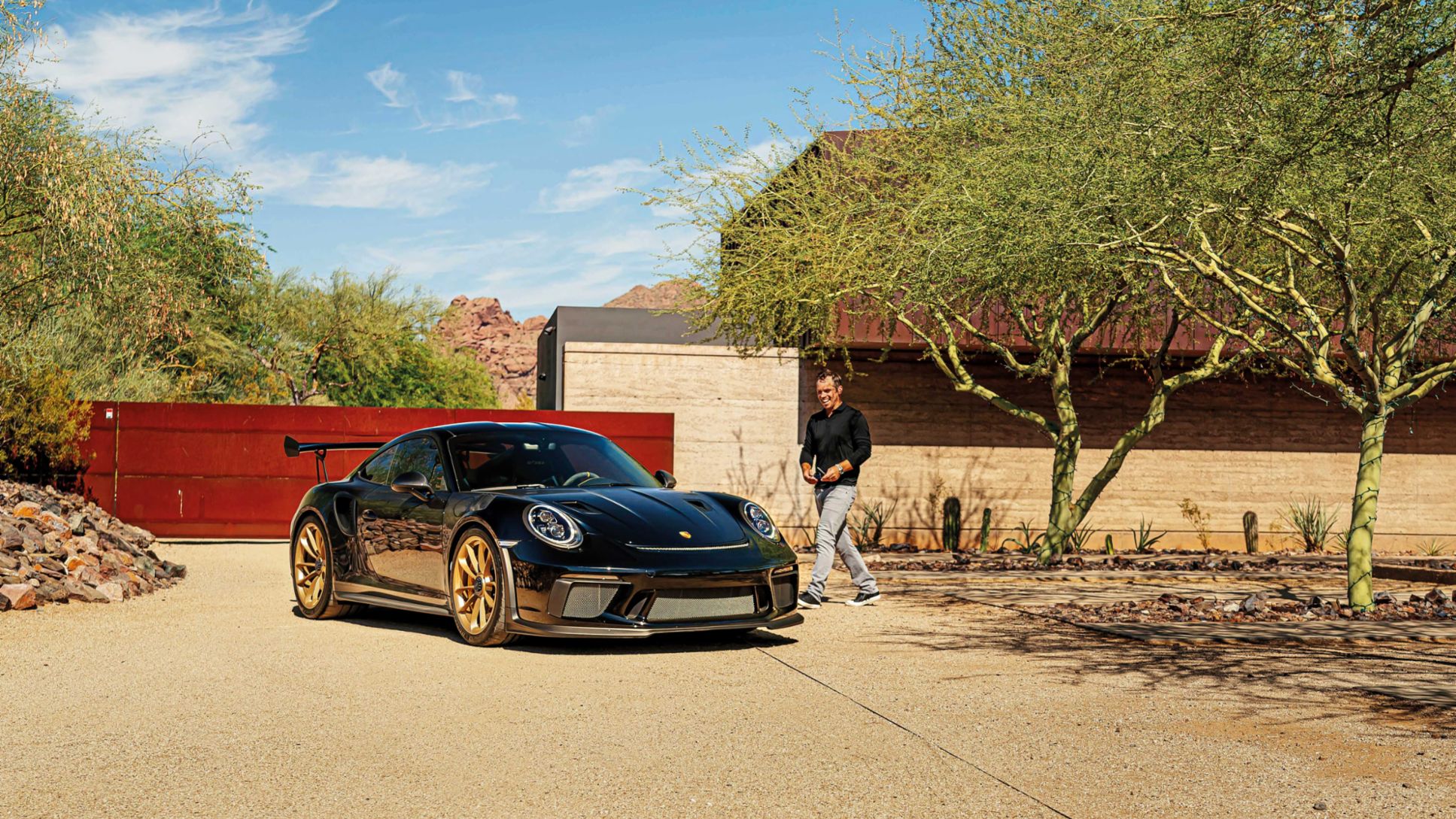 No one would think twice if Paul Casey offered to make them a cup of filter coffee one morning at his home in Arizona. It would be quick, tasty, and fine. What is remarkable is that he doesn’t. Instead, this British golfer prepares an espresso with the care of a superb open-heart surgeon: highly focused but relaxed. The espresso-making ritual reflects a love of detail only possible in someone who has arrived – both in life and in himself. This is someone who takes the time to do exactly what he wants.

Casey has acquired fresh coffee beans from his friend Nico, a Porsche fan and owner of the Fourtillfour café. Expressed as a time, the name would be 3:56 – a subtle evocation of the legendary Porsche model parked enticingly out in front. Casey monitors the grinding process and inspects the grain size as if it were the green before a putt. He puts exactly 20 grams of coffee into a portafilter, packs it, pre-brews it for nine seconds, and pulls the wooden lever down for 28 seconds. He places the resulting cup on the table and watches with the expectant gaze of a boy who has just made his father a sandwich for the first time. The pro athlete waits for his guest’s nod of approval after the first sip. He gets it, smiles and looks utterly satisfied.

But now we set off on a ride in his 991 generation Porsche GT3 RS, driving past cacti and stone formations and through towns with delightful names like Paradise Valley. Casey came to Arizona 25 years ago as a student, and never left. “Like a lot of teenagers, probably, I wanted to get as far away as possible from home, and 8,000 kilometres seemed good. But then I noticed how beautiful it is here.” It’s certainly true. A vibrant city like Scottsdale, with its fantastic restaurants and nightclubs in the middle of a breathtakingly gorgeous desert with spectacular hiking trails and golf courses, is a combination only a few places in the world can offer.

“A car should have a character"

“I like it when a drive becomes an experience, when I pull through a corner a little faster than everyone else,” he says with pleasure after sailing around a traffic circle as if in orbit. His mischievous light blue eyes sparkle. “A car should have a character, a soul. Like a 911 of the 996 generation. It’s wild and rebellious, but that’s what makes it unique. There are manufacturers that make only one cool model. But at Porsche, every car in the entire product range has a distinctive character.”

Casey’s almost childlike enthusiasm intensifies all the more when we stop at a mechanic’s workshop run by another friend. Like a kid at an amusement park who is free to try out all the roller coasters, he rushes from vehicle to vehicle. A green Porsche 968 Turbo S is in one corner, a gleaming black vintage Porsche 911 Targa stands in another, and beyond that a silver Porsche 912. All are being repaired or restored, and all offer deep insights into their inner lives. Casey eagerly asks the mechanic for details. He is 43-years-old, has won 19 pro titles, the Ryder Cup three times, and was ranked number three in the world. Yet he acts like Peter Pan in Neverland. Isn’t that what we try to foster in our children, namely, that they never grow up to such an extent that they lose the capacity for unadulterated enthusiasm?

A poster of a silver Porsche 959 hung in Casey’s room as a boy in the town of Weybridge near London. “I wanted to be a racing car driver, and was constantly drawing cars and racetracks,” he says. “But I was better at sports with balls and clubs, and tried my hand at nearly everything.”

“I wanted to be a racing car driver, but was better at sports with balls and clubs.” Paul Casey

As a child he was more like Roger Federer, who also did a number of sports and only started focusing later on tennis, and less like his colleague Tiger Woods, whose incredible talent propelled him straight into a career in professional golf. “As a teenager I won more awards in golf than in other sports. It was a cool feeling to be good at it.”

One could say there was a type of athletic natural selection going on. Paul Casey the rugby player was the first to disappear, then the racing car driver, then the tennis player ­– until finally the golfer was left. Casey had been one of the boys who always lounged on the very back row of the school bus, but after a while he began sitting in the front right behind the driver – because he needed so much space for his golf equipment. Many professional athletes describe a similar progression of stages that starts with a childhood dream, becomes a wish, then a hope, then an early success or two, and finally a career pursued with passion.

The journey becomes the destination

Despite all his achievements, Casey continues to move through all the phases of his career – although the urgent ambition of youth has now acquired a counterbalance of calm. “I know that I’ve arrived. But the ability to shift into a different mental state helps me not to lose that fire.” His sights are set on more championship titles, although they are not as important as they once were. Now what counts on the golf course is to achieve victory over himself, and play an outstanding round. Indeed, Casey enjoys the journey more than the destination.

He has been playing professional golf for 20 years, and thinks he was not exactly one of the most popular players on the tour in the first half of his career. “I was tough as nails to myself and to others. I was grimly determined, and not necessarily a joy off the course either,” he recalls.

“I used to think you had to be tough.” Paul Casey

“I always used to think you had to be tough to be good. Maybe that was also the case for athletes like Michael Jordan or Lance Armstrong. But at some point I realised that I could be just as good or better if I’m also a nice guy. That calming down in no way means lowering your performance.”

He describes a defining experience at the Dutch Open in 2014. His son Lex had just been born two weeks earlier. “I wasn’t playing well, and then my colleague Fabrizio Zanotti was hit on the head by a ball. That was a shock.” During the break in play, he sat in the clubhouse and stewed, asking himself what he was doing there. “I thought‚ ‘Forget it!’ I just wanted to go home, and started looking up flights.” His fiancée Pollyanna, whom he married in 2015, convinced him to stay. “That took the pressure off. I felt it would be OK even if I made a bad shot, because afterwards I’d be flying home to my family.”

He won the tournament. Maybe it’s a coincidence that Lex is jumping gleefully up and down on the sofa as his father tells this story. Or that his three-year-old daughter Astaria plops into the swimming pool like the very epitome of freedom, and that Pollyanna smiles as she watches the lively goings-on. Or maybe it’s not a coincidence. It could be yet another of those moments of equilibrium that are part of the charisma Casey exudes. With the relaxed composure of someone who does things not because he has to, but because he wants to. His recent appointment as a Porsche brand ambassador made yet another dream come true.

He wants to keep talking about his passion for Porsche. About the concentrated power of his black GT3 RS, which he has already demonstrated. About his white 997 gen’ GT3 RS, which will soon return from the mechanic’s, while his third 996 generation GT3 RS is waiting to be shipped from England to the USA. he also wants to talk about his Porsche 718 GT4 that will soon be delivered. When he thinks back to the poster in his room as a child, it all seems incredible to him. And he is grateful.

Lex is now quietly drawing "Star Wars" spaceships. They are more interesting to him than the talk about cars. What will become of this little fellow when one day he too fulfils all of his dreams? It’s time for Casey to brew another espresso. Which, by the way, is truly an experience. 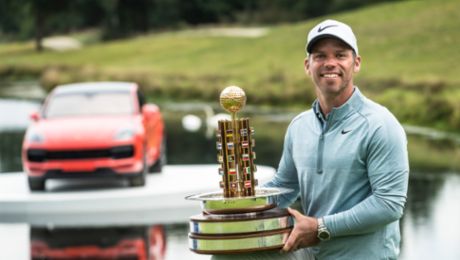 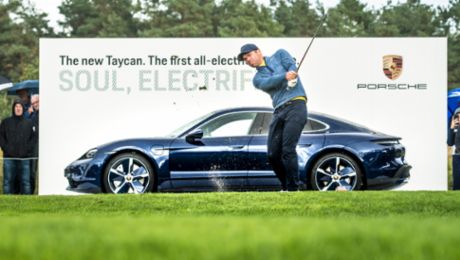 The 42-year old USA resident is competing at the Porsche European Open for the second time in succession.