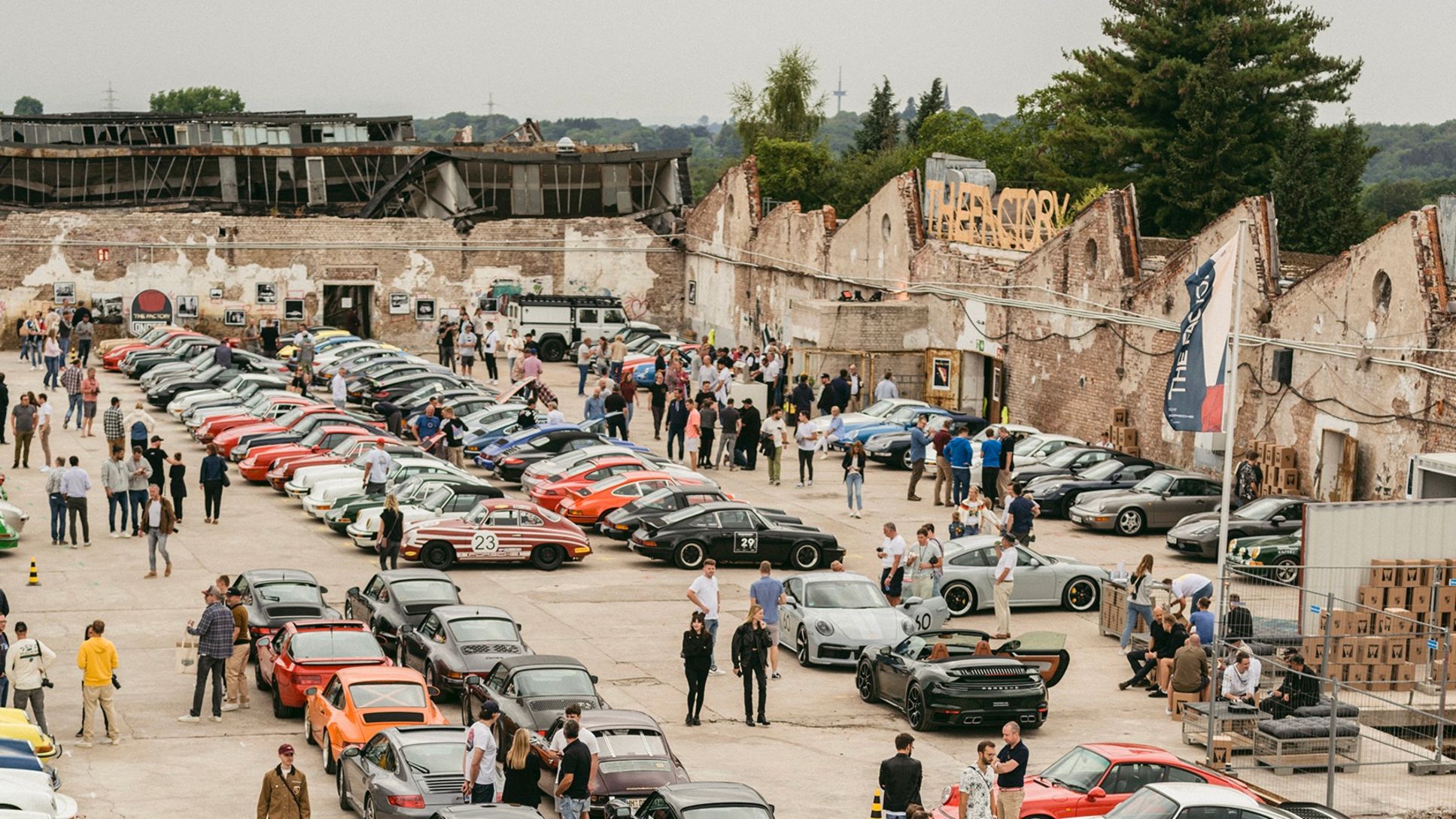 Wermelskirchen's industrial revolution began on Remscheider Strasse. Today, the Rhombuspark still exudes the charm of its industrial heyday – making it the ideal location for Tom Gädtke's ‘The Factory’. About 500 Porsche enthusiasts attended the community gathering in the heart of the former Bergische Eisenwaren factory.

After a turbulent year for Tom Gädtke (@onassisporsches), he kept a positive focus when it came to organising his Streetart.Motorsport.Revival event series. After illness forced him to miss last year's edition, the World Exhibition 2021 at the Mies van der Rohe Campus in Krefeld, the implementation of the 2022 event took a slightly different approach. For the first time, a reception was held on the eve of the event to kick things off.

Returning to the same location in 2022 was a deliberate breach of one of his own unwritten rules: “The desire to experience the flair from the previous year was simply too great,” says Gädtke. Calling the pre-event the ‘Homecoming’ made perfect sense.

An event among friends for fans of Porsche and industrial aesthetics

The main event of the eighth edition of the Porsche gathering under Gädtke’s label took place the following day in Wermelskirchen. The industrial charm of what is now the Rhombuspark, which had once revolutionised the face of the city as the site of the Bergische Eisenwaren plant, was the perfect location for The Factory. It would be the last chance to experience the striking industrial ruins in their unchanged form before they are converted into a new neighbourhood.

More than 250 vehicles, from the early 356 to the current 911, were painstakingly parked in perfect symmetry on the concrete floors of the former factory grounds. The Porsche cars alone were not the only visual attraction; it was the combination of shiny paint and the red brick of the shed halls that made strolling through the rows an experience to remember.

The Factory now joins the ranks of several annual events, the themes of which are always derived from the chosen location and the sort of atmosphere it offers. This year, the unique state of the Rhombuspark site and its technocratic vibe was the inspiration behind the name of the event.

Again this year, the main attraction was the gathering of like-minded individuals – enthusiasts who have become friends over the years. The programme was complemented by other attractions such as an exhibition by Belgian photographer Bart Kuykens, who showed a compilation of his works. In addition to exhilarating tour routes, which attendees drove in their own historic cars, the youngest guests also had the chance to do a few laps on a challenging Carrera track.

The legendary Werk 1 at the Zuffenhausen headquarters was closer to The Factory over this weekend than one might have thought at first glance – and not just because of the many vehicles that had once rolled out of those factory gates. It was the combination of red brick and extraordinary, unique vehicles from the community itself that, together with an appearance by Porsche Classic and the Porsche Exclusive Manufaktur, gave the event its special atmosphere.

One crowd favourite was the current 911 Sport Classic, a limited-edition model of just 1,250 examples. The second of a total of four collectors’ items from the Heritage Design strategy, the car revives the style of the 1960s and early 1970s and was there to be explored throughout the day. The predecessor to the limited edition – one of just 250 examples of the 997 911 Sport Classic ever built – was also an eye-catcher. Fittingly, a current-generation 911 Turbo Cabriolet with the Heritage Design Package Classic inspired by the Sport Classic interior was also on hand. Another highlight that rounded off the special models in exclusive shades of grey, was the graphically staged container that brought the 996 Classic Club Coupé to life.

Step by step, attendees learned about the one-off model through large-scale visuals created as part of the Sonderwunsch programme together with the Porsche Club of America. Although the factory one-off in Sport Grey Metallic was not physically present, visitors could delve into details such as the double-bubble roof, Fuchs rims, ducktail spoiler and the Pepita houndstooth woven leather interior.

Again this year, there was a sneak preview of the forthcoming issue eight of the coveted ORIGINALE magazine. The German edition of the classic car magazine , which also features a parts catalogue, was shown for the first time at The Factory and 500 copies were handed out to visitors. On request, two event stamps made the magazine a literal original itself.

In addition to the presentation of ORIGINALE 08 and the exhibition by Porsche Classic and the Porsche Exclusive Manufaktur, visitors could book a Driving Experience with current GTS vehicles from the Bensberg Porsche Centre. Porsche vehicles from across the generations mingled on selected routes in the Bergisches Land region, capping an unforgettable day among friends. The finale for the 500-plus Porsche enthusiasts was the Streetart.Motorsport.Revival with a short-film festival held in the Rhomubspark grounds.

The Factory was a homecoming not just for Gädtke, but for all visitors, most of whom have already expressed interest in attending next year’s event. One thing is for sure – in 2023 it will once again be all about “bringing the people together”. 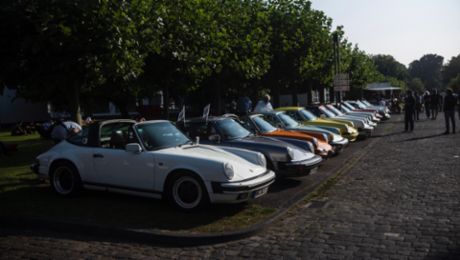 This year, Tom Gädtke organised a gathering of Porsche lovers entirely under the Bauhaus theme.