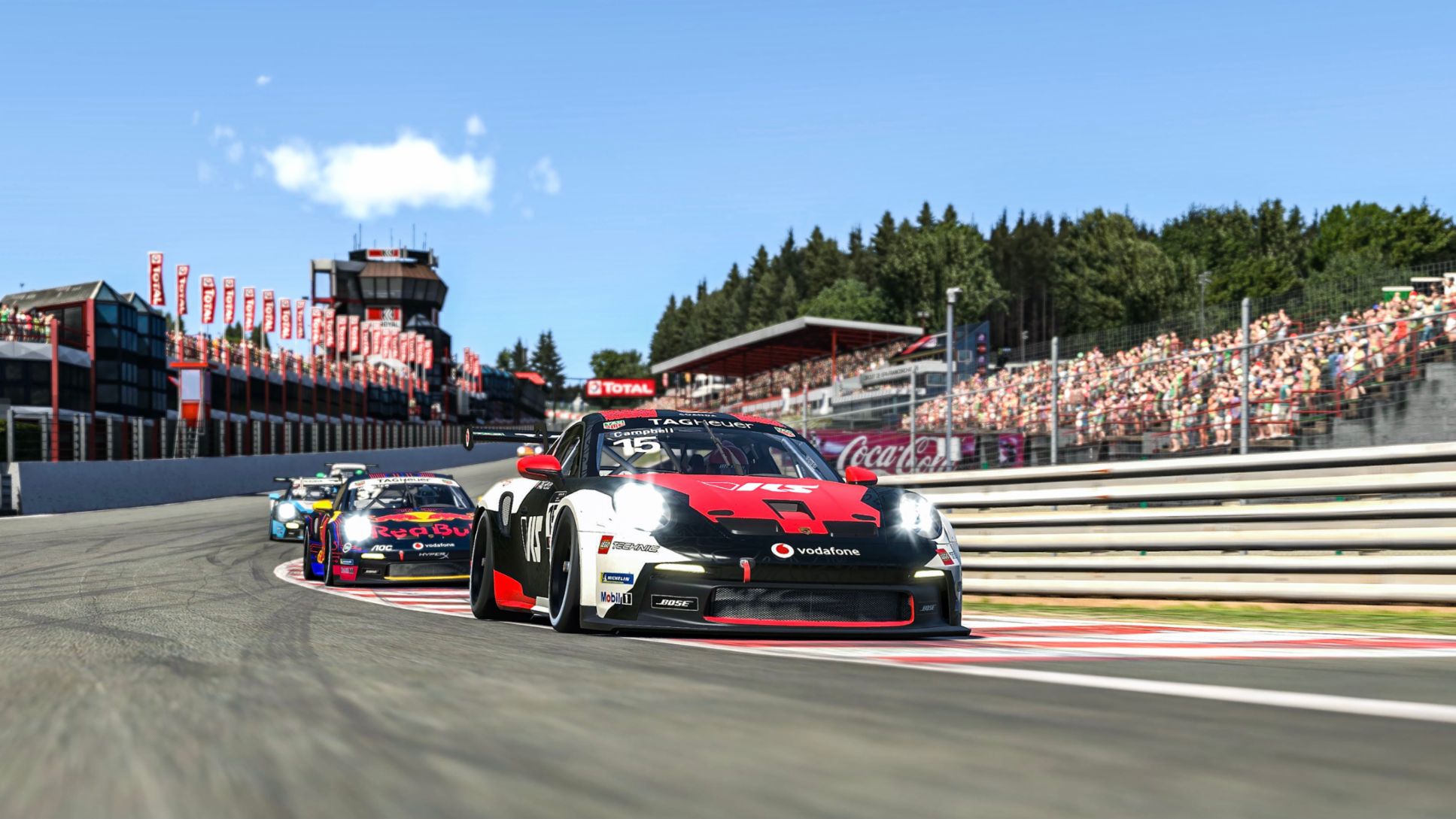 Round seven of the Porsche TAG Heuer Esports Supercup (PESC) ended with a victory for the American Zac Campbell on the Circuit de Spa-Francorchamps.

Sebastian Job made his mark in the qualifying session on the 7.004-kilometre Formula One racetrack and snatched his third pole position of the season. In the sprint race over six laps, the British sim racer initially took the lead but had to relinquish it to Alejandro Sánchez (SDK Gaming) after the Spaniard outbraked him approaching Les Combes. Two laps later, Job reclaimed the front spot at the same place. When Sánchez was busy fending off the Cup-911 driven by VRS driver Charlie Collins from Great Britain, Job grabbed the chance to pull clear and bring home victory. Collins took second place, with Sánchez in third ahead of Ellis and Diogo C. Pinto.

The top eight of the sprint race lined up on the grid for the PESC feature race in reverse order: This meant that Britain’s Jamie Fluke (Apex Racing Team) started from pole position with Cooper Webster, the most successful rookie of the season so far, lining up next to him. Zac Campbell and Pinto shared the second grid row. Fluke immediately catapulted into the lead with Campbell, Pinto and Ellis in the following three positions. Job, Sanchez and Collins, however, got off to a bad start when the trio became entangled in a collision and lost ground.

While the battle among the leading pack of five was fierce, the order remained the same – until lap nine. In a wheel-to-wheel duel with Campbell, Fluke left the track in Malmedy. A little later, Pinto was handed a “slow-down” penalty after failing to comply with the track limits. In the twelfth and final lap, Campbell, Webster and Ellis flew in formation towards the famous Eau Rouge dip. In the end, Campbell maintained the upper hand and celebrated his second win in the feature race. Webster came second, with Ellis in third and Fluke in fourth. Pinto crossed the finish line in sixth place behind the Australian Jordan Caruso (Logitech G Altus Esports). Sebastian Job was tenth.

The All-Stars took on the challenges of Spa for the first time this season with the ca. 367 kW (500 PS) Porsche 911 GT3 R. In qualifying, guest driver Marco Bischoff outpaced the American Casey Kirwan, but lost the lead in the sprint to the first corner. An intensive duel unfolded between the pair that lasted almost the entire eight-lap distance. In the final stage, Tyson “Quirkitized” Meier joined the action and even progressed to second place. Kirwan managed to keep his nose in front with Bischoff ultimately crossing the finish line in second place a mere 0.064 seconds behind.

For the second race, the competitors lined up in the reverse order of the previous race results. While “Quirkitized” Meier and Bischoff fell victim to a chain reaction in the backfield early on, Kirwan launched an impressive charge through the order. In the first of twelve laps, he ploughed his way from 17th to 10th. By half-time, he was back in the second place behind the Brazilian IndyCar legend Tony Kanaan but first had to defend this position from a feisty Emily “Emree” Jones. In the penultimate lap, Kirwan catapulted out of Kanaan’s slipstream while approaching the “Les Combes” corner and swept into the lead. Kanaan, the real Indy-500 winner from 2013, also had to allow “Emree” past and ultimately finished in third place.

Preview: Round 8 of the PESC pays a visit to the “Green Hell”

On May 7, the Porsche TAG Heuer Esports Supercup (PESC) will enjoy one of the real highlights of the season: The 35 sim racers will go head-to-head on the infamous Nürburgring-Nordschleife with the digital Porsche 911 GT3 Cup. While the 25.38-kilometre racetrack through the Eifel is considered one of the most beautiful courses in the world, it is also one of the most difficult – and this also applies to the virtual version run on the iRacing simulation platform. The programme includes a three-lap sprint and a feature race over four laps. Last year, Sebastian Job was the star of the shorter race as the victor, with Diogo C. Pinto finishing second in the feature race.

Content creators from the esports racing scene will again join the action, with two All-Star races as part of a support programme. Like at Spa-Francorchamps, they will drive the ca. 367 kW (500 PS) 911 GT3 R. The All-Star live stream begins on 7 May at 7.30 pm (CEST) with the qualifying session. The two influencer races get the green light at 7.45 pm and 8.05 pm respectively. The Porsche TAG Heuer Esports Supercup race action will begin at around 9.15 pm.

Fans can watch the iRacing action live online via Porsche’s channels on YouTube and Twitch. Further information on the Porsche TAG Heuer Esports Supercup can be found on the Porsche Motorsport Hub, Porsche Newsroom and the Twitter account @PorscheRaces.

Casey Kirwan (USA): “The races were great fun. The second one was a bit chaotic at the start but I was pretty lucky and managed to work my way up the pack. On the straights, Emily Jones and I used each other’s slipstream to catch up. It all turned out in my favour in the end.”

Zac Campbell (USA/VRS): “The flight for the championship is tough when Diogo Pinto, Kevin Ellis, Sebastian Job and I are running at the front. I’ve never experi-enced such a gripping duel – it was fantastic! No other series in the world offers such exciting races as the Porsche TAG Heuer Esport Supercup does and I’m proud to be able to compete here!”

Cooper Webster (AUS/Oracle Red Bull Racing Esports): “For the PESC races, I have to get up at 4 am here in Australia and that’s hard. But when I get a great result like today in the feature race, I’m thrilled. In the first lap I didn’t want to take any risks. After that, exactly what I’d anticipated happened: the cars in front of me touched and I got past. At the beginning of the last lap, I tried to attack again in the first corner but Zac Campbell knows how to defend himself well. I’m very happy with second place.”

Kevin Ellis jr. (GB/Apex Racing Team): “We knew that overtaking would be difficult at Spa. We tweaked the setup for this raced and it seems to have worked well. I’m satisfied with fourth place in the sprint and third in the feature race. I’ve earned de-cent points for these results.” 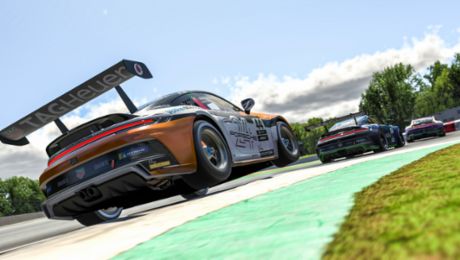 Dayne Warren has won the feature race of the Porsche TAG Heuer Esports Supercup on the Circuit Gilles Villeneuve. 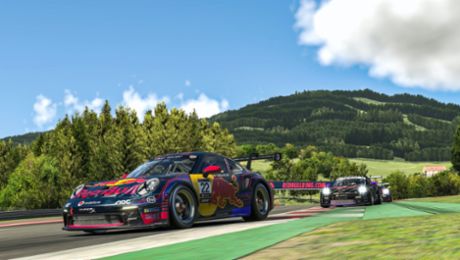 Sebastian Job clinches his third win of the season 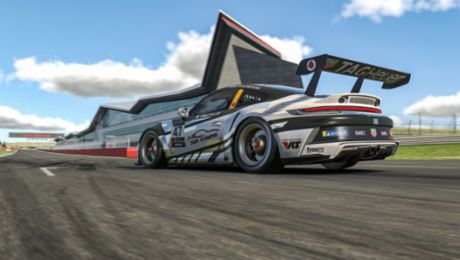 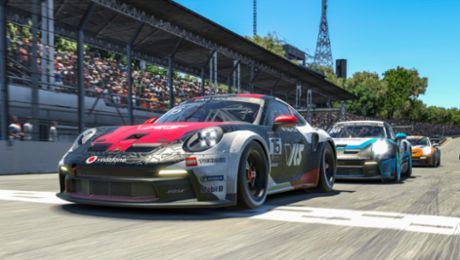