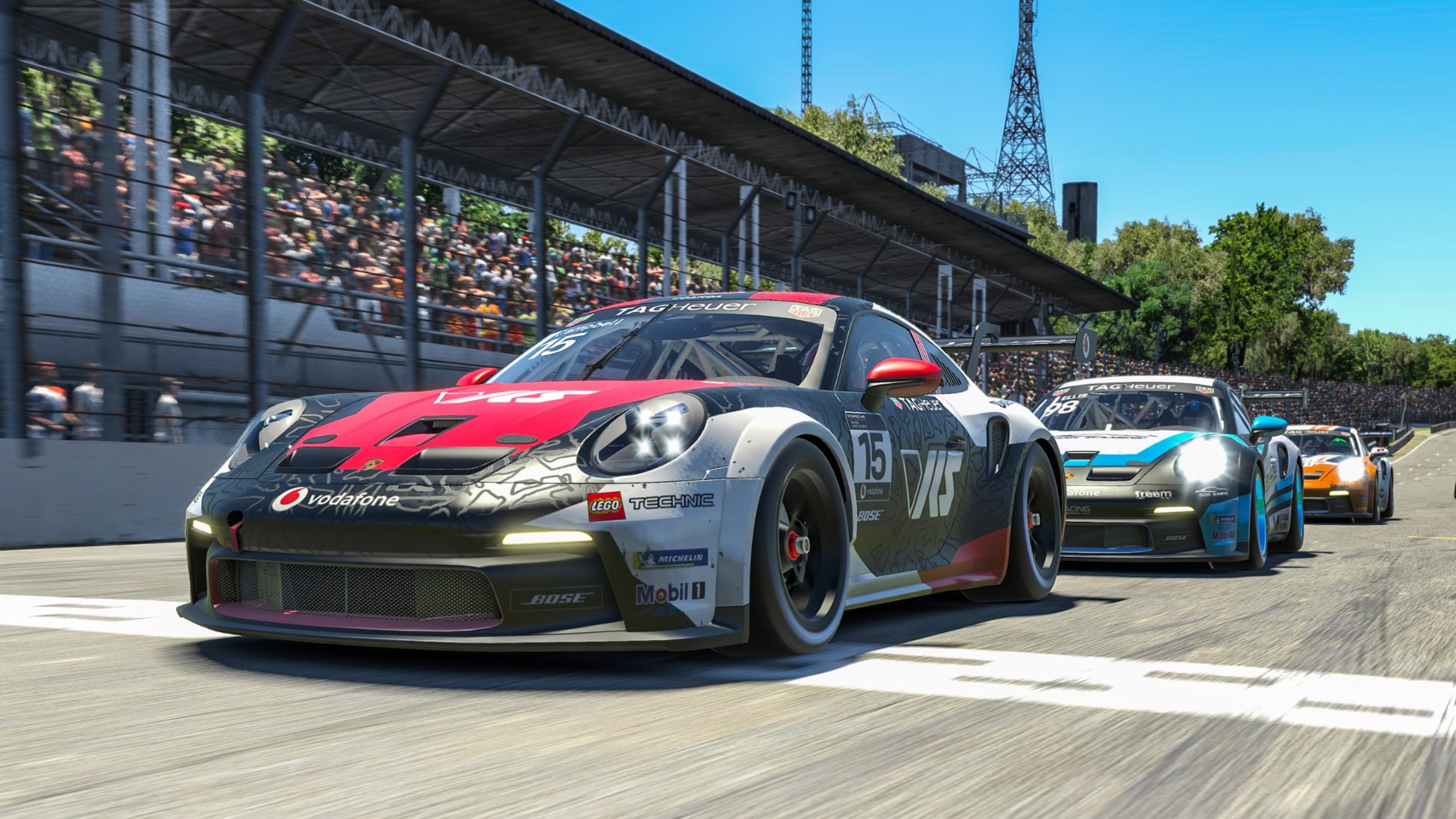 On the 4.309-kilometre Grand Prix circuit of Interlagos in Brazil, the American from the VRS team defeated Britain’s Kevin Ellis jr. (Apex Racing Team) and the new points’ leader Diogo C. Pinto (E/Team Redline) in the penultimate lap. Prior to this, Sebastian Job from Great Britain had won the sprint race on the Autódromo José Carlos Pace on the outskirts of Sao Paulo. All competitors in the international esports one-make cup, which is run on the iRacing simulation platform, drive the 375 kW (510 PS) Porsche 911 GT3 Cup. For season four of the PESC, this racing car is based on the latest 992-generation model.

Nothing could hold Sebastian Job back in the 10-lap sprint. The 2020 PESC champion set the fastest time in qualifying and turned his pole position into a lights-to-flag victory. Driving for the Red Bull Racing Esports team, the British sim racer managed to eke out a small advantage at the start, but then came under pressure from Jamie Fluke (GB/Apex Racing Team), Salva Talens (E/MSI eSports) and Zac Campbell in his slipstream. The question of who would finish in eighth and thus take up the main race from the first grid spot was equally as gripping as the situation at the front. Ultimately, Diogo C. Pinto prevailed against Coanda driver Jeremy Bouteloup from France, who had travelled to Sao Paulo as the series leader. A nail-biting duel: Prior to round three of the PESC season, Pinto ranked second in the driver’s standings.

The Spaniard tackled the main race over 20 laps from pole position but was unable to hold his pursuers at bay. In lap five he relinquished his lead to Kevin Ellis jr., and was then overtaken by Australian Dayne Warren (Coanda) and Zac Campbell. The tussle for the lead continued: in lap twelve, Warren snatched the top spot, four laps later Ellis reclaimed the lead. Campbell waited until the penultimate lap to play his hand – he swept past Ellis and scored the first victory in his PESC career. Pinto benefited from Warren’s drive-through penalty and inherited third place, followed by Talens and the former Porsche Junior Ayhancan Güven from Turkey. Jeremy Bouteloup finished in sixth place ahead of Sebastian Job and Jamie Fluke. Best rookie laurels again went to Australia’s Cooper Webster (Red Bull Racing Esports) in ninth place.

After the third of ten race weekends on the Porsche TAG Heuer Esports Supercup calendar, Diogo C. Pinto has moved into the lead with 155 points. Jeremy Bouteloup has dropped to second place with Ayhancan Güven retaining third place.

In the All-Star competition, Tyson “Quirkitized” Meier won the first of the two Interlagos races. In the TAG Heuer Esports Supercup support programme, famous content creators from the esports scene compete against each other. Meier had taken up the race from pole position in his digital Porsche 911 GT3 Cup. Second place went to Borja Zazo, who managed to overtake Xabier “Heikki360ES” Sanchez, Matt Malone and the IndyCar ace Tony Kanaan from Brazil during the 12-lap battle. These three went head-to-head for third place, with Malone ultimately beating Sanchez and Kanaan.

The second Interlagos All-Stars race over 17 laps started in the reverse order of the previous sprint race result. Victory went to Emily “Emree” Jones. From P8, the Australian ploughed her way through the field. On lap six, the All-Stars title defender overtook Dan “Suzuki” Sosulski, five laps later it was Jaroslav “Jardier” Honzik’s turn. From the last grid spot, Tyson Meier launched an ambitious charge which brought him to fifth place behind Honzik, Suzuki and Borja Zazo. This effort put “Quirkitized” on first place in the drivers’ standings ahead of Jones and Zazo.

The “Home of British Motor Racing’ hosts round four

In a fortnight, round four of the Porsche TAG Heuer Esports Supercup again will be contested on a tradition-steeped Formula 1 racetrack: The competitors of the international esports one-make cup take on the virtual Silverstone Circuit at the wheel of their digital 911 GT3 Cup. The 5.891-kilometre Grand Prix circuit – fondly dubbed the ‘Home of British Motor Racing – has hosted many motorsport events since 1947. On 19 March, the PESC sim racers will contest a seven-lap sprint and the main event over twice that distance. Last year, American Mitchell deJong (Virtual Racing School) won the first race, with Britain’s Sebastian Job (Red Bull Racing Esports) claiming victory at the second event.

In Silverstone, the 35 sim racers again receive support from famous influencers from the esports racing scene, with two All-Star races held as part of a support series. The well-known content creators will drive the Porsche 718 Cayman GT4 Clubsport. The All-Star live stream begins at 6.30 pm (CET) with the qualifying session. The two influencer races get the green light at 6.45 pm and 7.05 pm respectively. The Porsche TAG Heuer Esports Supercup race action will begin at about 8.15 pm.

Fans can watch the iRacing action live online via Porsche’s channels on YouTube and Twitch. Further information on the Porsche TAG Heuer Esports Supercup can be found on the Porsche Motorsport Hub, Porsche Newsroom and the Twitter account @PorscheRaces.