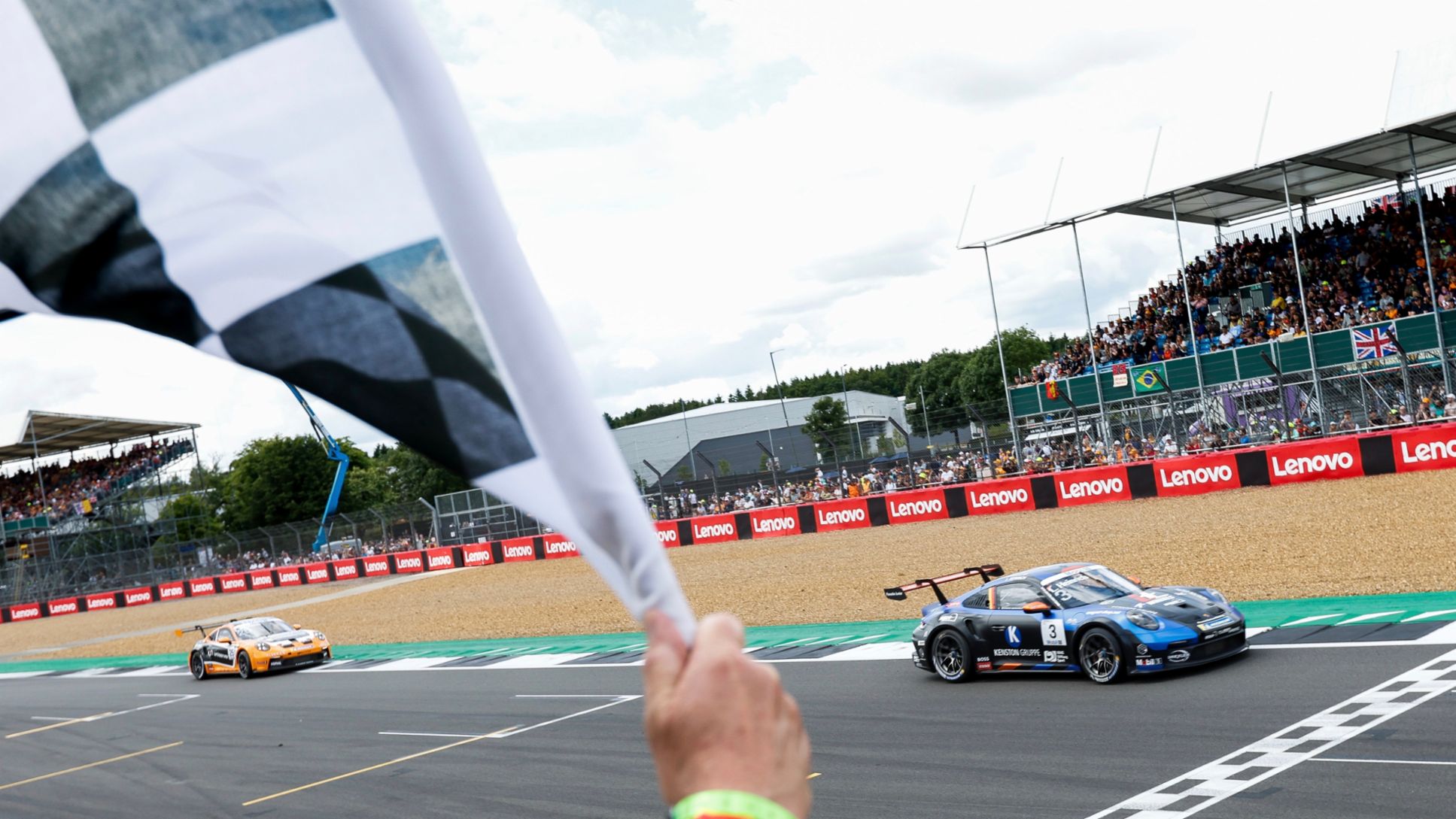 The decisive moment happened in the first few seconds: Dutchman Larry ten Voorde from Team GP Elite fluffed his start from pole position. This left the door open for Laurin Heinrich who grabbed his chance – the German won the sprint to the first corner in his Porsche 911 GT3 Cup fielded by the SSR Huber Racing squad and snatched the lead. Ten Voorde then had to settle in behind Harry King. However, still in the first lap, the Dutchman reclaimed his second place from the local hero driving for BWT Lechner Racing.

“My strategy was to draw alongside Larry as quickly as possible after the start. I knew that I’d be on the inside at the first corner and that was the more favourable line – this plan worked perfectly,” said a delighted Heinrich after claiming the second win of his Supercup career. Ten Voorde, on the other hand, was critical of his performance: “I reacted too late at the start. Luckily, I managed to counter Harry’s move but I didn’t have a chance against Laurin.”

This was the same situation for the restart after the safety car, which was deployed after a midfield collision during the first lap. With a catapult start, Heinrich maintained his commanding lead over ten Voorde and controlled the race to the flag. “Larry was faster than me in some passages, but I had the advantage in other sections. For me, the race was more strenuous than it might have looked,” explained the Porsche Junior, who has moved up the points table to position two thanks to this victory.

Securing second place, Larry ten Voorde still managed to defend his championship lead in the Porsche Mobil 1 Supercup. Harry King took the flag in third place. The British racer had to fend off his BWT Lechner Racing teammate Dylan Pereira over the race distance. “Shortly after the start, after I got past Larry, I attempted to overtake Laurin as well. I made a mistake, which enabled Larry to reclaim second place. After that, it was all about not making any mistakes in the duel with Dylan,” concluded King.

“That was a strong race from Porsche Junior Laurin Heinrich. He kept his cool in the duel with Larry ten Voorde, who is a two-time champion of the Porsche Mobil 1 Supercup. I’m also pleased to see drivers from three different teams on the podium. I’m looking forward to the next race at the Red Bull Ring, which will no doubt be just as enthralling,” stated Oliver Schwab, Project Manager Porsche Mobil 1 Supercup.

As the fastest rookie, Bastian Buus crossed the finish line in fifth place overall. The BWT Lechner Racing driver from Denmark treated spectators to a gripping duel over the entire distance with Britain’s Lorcan Hanafin from the FACH AUTO TECH squad. In the final sprint to the finish line, Buus managed to squeeze past Hanafin in the last metres. The winner’s trophy in the ProAm classification went to British racer Aaron Mason from the Martinet by Alméras team.

Only a week’s break before the next Supercup race

From Silverstone, the teams contesting the Porsche Mobil 1 Supercup head straight to the Red Bull Ring in the south of Austria. On the Formula 1 circuit in Styria, round four of the international one-make cup with the Porsche 911 GT3 Cup will be held next weekend (8 to 10 July 2022) as part of the Austrian Grand Prix support programme.

Today’s Red Bull Ring goes back to the Österreichring, which was opened in 1969 near Zeltweg, but actually in the municipality of Spielberg. From 1970, the then six-kilometre racetrack was part of the Formula 1 World Championship. In 1995 and 1996, the Österreichring was modernised and the name was changed to A1-Ring. After another modification and since the reopening in 2011, the 4.318-kilometre circuit has been called Red Bull Ring.

Last season, two rounds of the Porsche Mobil 1 Supercup were held at the Red Bull Ring. The eventual champion Larry ten Voorde (Team GP Elite) from the Netherlands won the race held as support to the Grand Prix of Styria. Jaxon Evans (Martinet by Alméras) from New Zealand claimed victory at the Supercup race run as part of the Austrian Grand Prix support programme.

Larry ten Voorde has dominated the qualifying for round three of the Porsche Mobil 1 Supercup. Driving for Team GP Elite, the Dutchman appeared to be the only driver who expected that the pending rain would make more than one flying lap impossible. “I’ve never encountered such a situation in my entire Supercup career – I gave everything from the very first metre and I almost spun in a section that was already wet,” revealed the defending champion and series leader. At the wheel of his Porsche 911 GT3 Cup, ten Voorde turned the decisive lap a good half a second faster than Porsche Junior Laurin Heinrich from the SSR Huber Racing squad. “I wasted time on what turned out to be my only hot lap because I was still warming up my tyres. I only picked up my pace when I realised that Larry had already attacked. I’m satisfied with the second-fastest time, but I could’ve done better,” says the slightly annoyed 20-year-old Germany.

No home advantage for the Supercup drivers from the UK

Thirty-two drivers from 15 nations registered for round three of the international one-make cup. While the Silverstone race represented a home race for fifth-placed Harry King (BWT Lechner Racing), rookie Lorcan Hanafin (FACH AUTO TECH) and Porsche GB Junior driver Adam Smalley (CLRT), this does not automatically translate into a home advantage for the three UK drivers: King and Hanafin only know the 2.693-kilometre “Club” version of the tradition-steeped racetrack from the Porsche Carrera Cup GB – the Supercup, however, is contested on the 5.891-kilometre Formula 1 circuit. “About half of the racetrack was completely new for me,” explains the Supercup newcomer Hanafin. But the 19-year-old reigning vice-champion of the British Porsche Carrera Cup is obviously a fast learner: With a good performance, he finished the qualifying for the third Supercup round in eighth place.

In 2020, King took home the title of Porsche’s national one-make cup. In the current season of the Porsche Carrera Cup Benelux, he has won five out of six races so far. “Silverstone suits my driving style. I want to fight for victory on Sunday,” says the determined 21-year-old. His qualifying result underscores his plan: King set the third fastest time and thus takes up the race from the second grid row.

Adam Smalley also climbed into the cockpit of the Porsche 911 GT3 Cup on the Grand Prix circuit in Silverstone for the first time in Friday’s practice session. “Luckily, it didn’t rain during the practice and I could quickly familiarise myself with the track,” states the 21-year-old, who receives support from Porsche GB. In qualifying, however, he was one of the drivers to be taken by surprise by the rain. Ultimately, Smalley had to settle for P17. Still, driving out of the pit lane for the first time was a very special moment for him: “I’ve never driven in front of so many fans.” On Sunday, up to 150,000 spectators are expected at the storied racetrack around 100 kilometres north of London.

Once again, the large grid line-up includes drivers of many different nationalities: Driving for the GP Elite team, the current leader of the series Larry ten Voorde from the Netherlands faces 31 rivals from 15 countries. For the first time this season, Porsche drivers from the USA, Belgium and Australia will compete. And for the first time in the 30-year history of the one-make cup, an Israeli driver will make a guest appearance. The 911 GT3 Cup will take off on the storied racetrack around 100 kilometres north of London directly before the British Formula 1 Grand Prix.

“The capacity grid and the popularity with international competitors are again a huge compliment, especially for the teams in the Porsche Mobil 1 Supercup. At the start of the season in Imola, we had Swedish team Fragus Motorsport as guests to take on the registered teams. In Silverstone, we’re welcoming Kelly Moss Road and Race from the USA for the first time, who bring two drivers as guest entrants,” comments Oliver Schwab, Project Manager Mobil 1 Supercup. “We’re also tackling Silverstone for the first time with the 992-generation Porsche 911 GT3 Cup. I’m curious to see which driver and team will master this challenge best.”