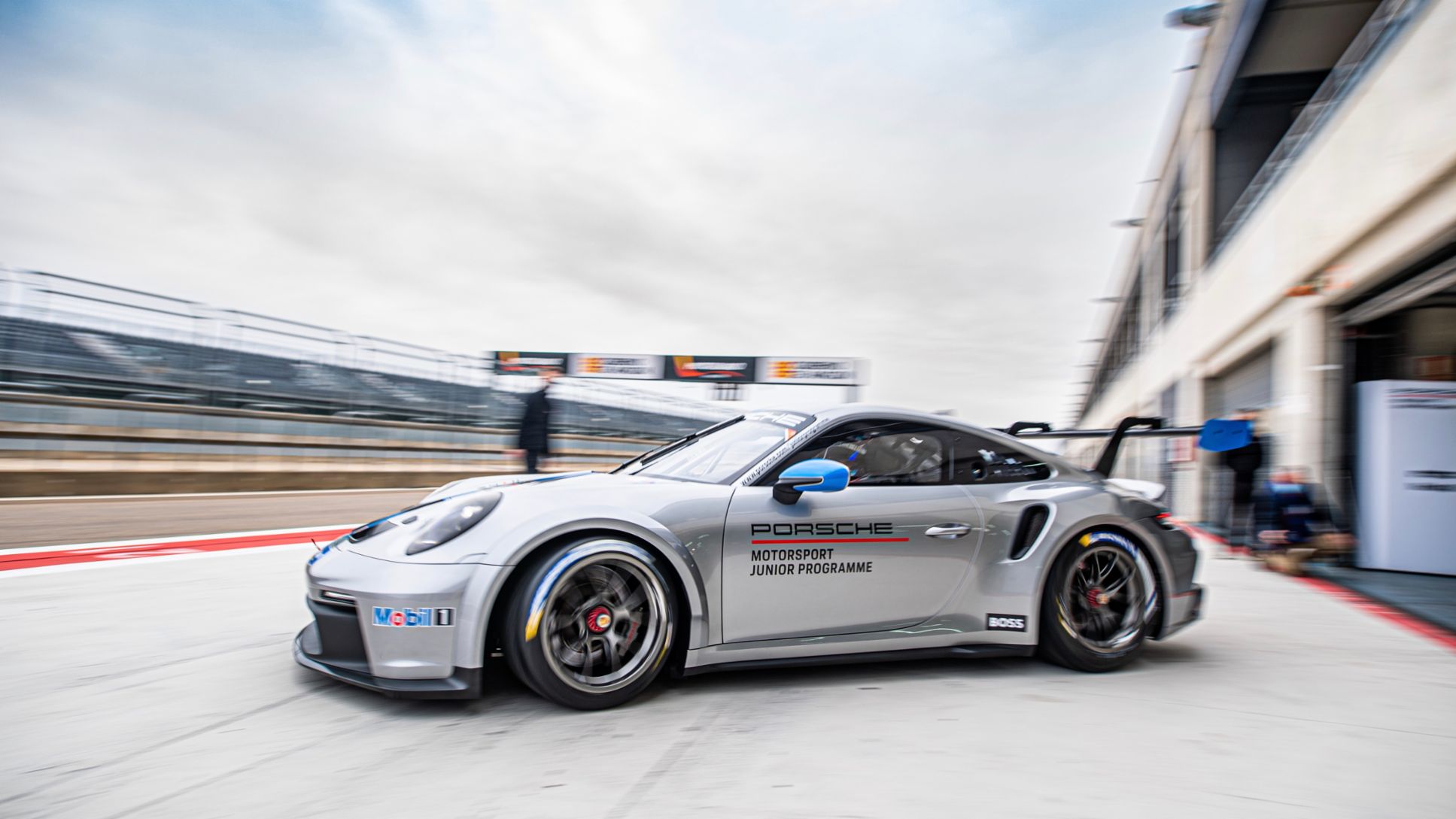 Since 1997, Porsche has supported talented youngsters on their path to becoming professional drivers through an exemplary youth development programme. Timo Bernhard, Marc Lieb and Earl Bamber are three examples of successful racing drivers who – over and above their world championship titles and Le Mans victories – have one thing in common: All three honed the skills for their remarkable careers in the Porsche Junior Programme.

Traditionally, the Porsche Mobil 1 Supercup has provided the stage for the young guns. This is where the juniors selected by Porsche can put their skills to the test. The international one-make cup is contested as part of the Formula 1 support programme and is considered one of the toughest series in the world. For the last 25 years, the Supercup has been the perfect training ground for this popular junior initiative. As a new protégé, Laurin Heinrich will kick off his maiden season as a Porsche Junior at the support race to the Emilia Romagna Grand Prix in Imola on April 24. It is now confirmed that the 20-year-old German will drive the ca. 375 kW (510 hp) 911 GT3 Cup, generation 992, fielded by the SSR Huber Racing team.

Porsche traditionally attaches great importance to promoting young talent in motorsport. The squad of former juniors who have successfully climbed the Porsche motorsport ladder is extensive. In 1997, the two Germans Dirk Müller and Marc Basseng were the first talents to complete the sports car manufacturer’s training programme. To date, they have been followed by 25 other drivers, for whom the junior initiative has provided the decisive catalyst for their driving and personal development. They all used the intensive support as a springboard into successful professional motor racing careers. The two Germans Timo Bernhard (Porsche Junior from 2000 to 2001) and Marc Lieb (2000 to 2002) and the New Zealander Earl Bamber (2014) are prime examples. All three have won the legendary 24 Hours of Le Mans and claimed titles in the FIA World Endurance Championship WEC at least once in the Porsche 919 Hybrid.

Their list of successes is long. Bernhard, for example, also triumphed at the US classics in Daytona and Sebring. With five overall victories, today’s Porsche brand ambassador is one of the record winners at the Nürburgring 24-hour race. Marc Lieb was a member of the quartet that won on the Nordschleife four times with Manthey-Racing’s 911 GT3 RSR and set many other milestones over the course of his remarkable motorsport career. Earl Bamber has worked his way through the ranks of the entire Porsche motorsport pyramid – from a national Cup Challenge and the Porsche Carrera Cup Asia to the two-time Le Mans winner and FIA World Endurance Champion in 2017. Two years later, he secured the GTLM title in the North American works team’s 911 RSR in the IMSA WeatherTech SportsCar Championship.

More recently, two young guns from the current works driver squad turned heads at the season-opening round of this year’s IMSA series: Mathieu Jaminet from France (Porsche Junior 2016) and the Australian Matt Campbell (2017) prevailed at the 24 Hours of Daytona at the end of January and celebrated a victory in the hard-fought GTD-Pro category with the Porsche 911 GT3 R – further proof that the international youth development programme at Porsche Motorsport has served as the ideal launching pad for a successful career in motorsport for 25 years.

Two of their colleagues are set to follow in their footsteps in this year’s DTM: Competing for Team 75 Bernhard, the Austrian works driver Thomas Preining (Porsche Junior 2017 to 2018) climbs aboard a 911 GT3 R, while the Norwegian Dennis Olsen (2016 to 2017) takes the wheel of one of the two FIA-GT3-homologated nine-elevens from SSR Performance.

Laurin Heinrich takes the stage as the 2022 Porsche Junior

Laurin Heinrich is the latest addition to the Porsche support programme. At the end of last year, the 20-year-old beat eleven international competitors in a three-day shootout in Aragon, Spain. The Franconian had already given an impressive performance in the Supercup in 2021, where he finished fourth overall and took home the laurels as the best newcomer. Now, he aims to claim the title with SSR Huber Racing to prove himself for greater tasks and earn a possible promotion to works driver. 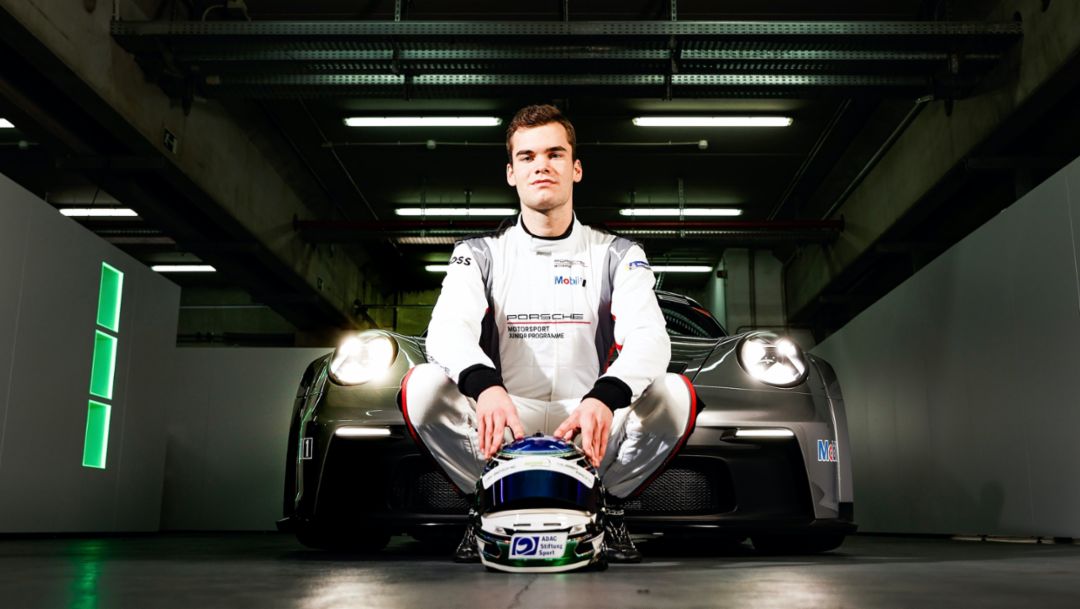 “The competition in the Porsche Mobil 1 Supercup will be fierce again in 2022,” emphasises Heinrich. “At SSR Huber Racing I can build on the experiences from last year. The working relationships don’t have to start from scratch, we all know each other and the atmosphere is good. Although the team only contested its first full Supercup season last year, we managed to win the rookie championship right off the bat. We want to build on that, improve further and win the Supercup in 2022.”

The new junior driver will receive a support package of 225,000 Euros towards this year’s Porsche Mobil 1 Supercup campaign. The programme follows a holistic approach and covers all aspects of a professional motor racing career. This includes, for example, the same sports medicine and scientific training support from the University of Potsdam that the works drivers are offered. Mental training and media seminars as well as PR engagements and marketing activities round off the training to become a professional racing driver.

“It’s not enough to have huge talent behind the wheel and fast lap times on the track, a Porsche junior must also have other strengths – including, for example, how to confidently handle the media and professionally work with a team,” explains Sascha Maassen. The former Porsche works driver has been supporting juniors as a coach at the Supercup races since 2012. “During the annual selection process, a competent panel decides which driver has the best overall package and shows the greatest development potential.”