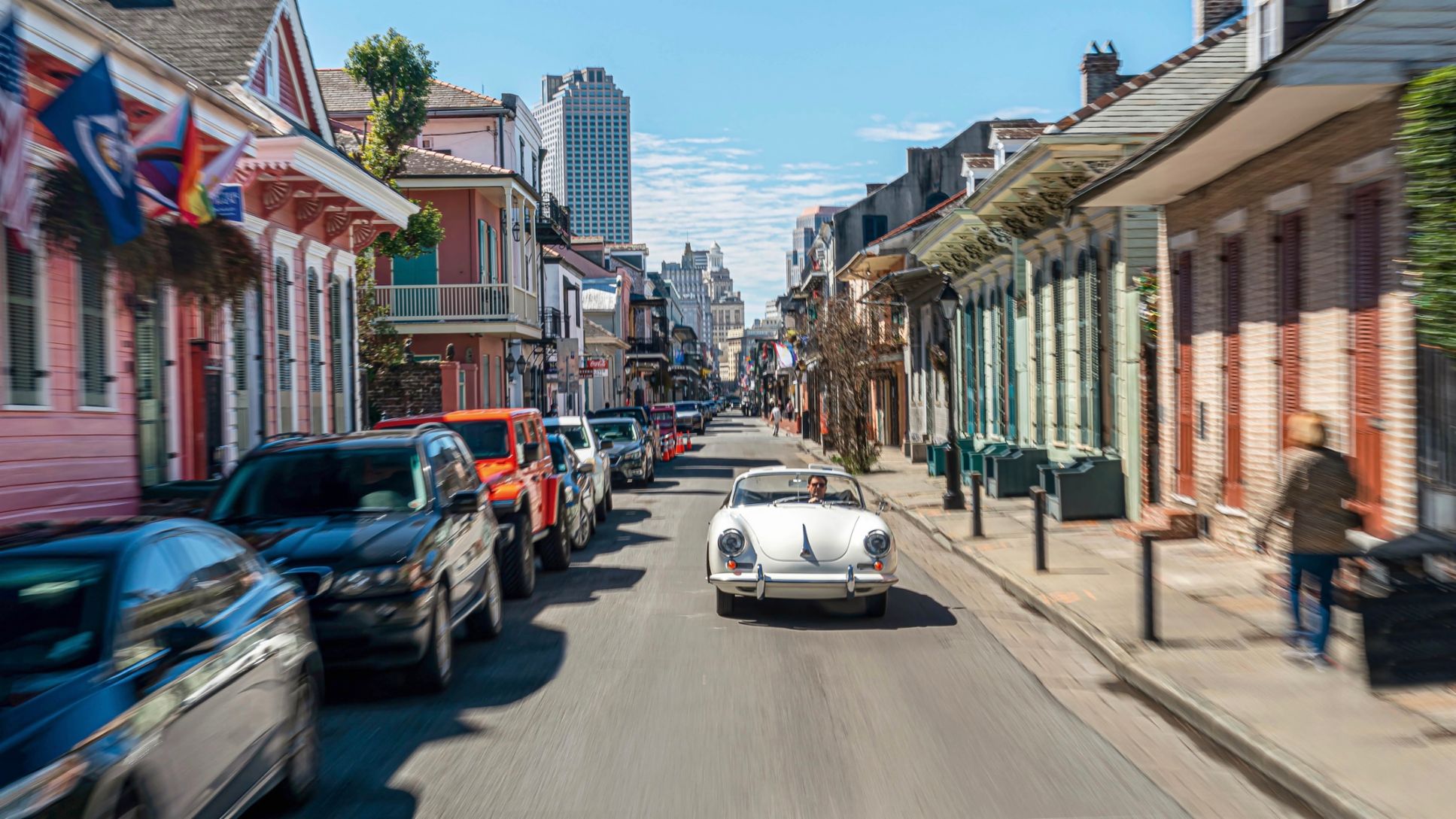 It’s a typically crazy evening at Tipitina’s, the legendary music venue in New Orleans. Tyler Thompson, a 34-year-old who has produced movies on the order of Black Swan, Everest, and The Trial of the Chicago 7, stands on the stage. He’s playing a guitar and singing about the US as the “land of the free”. It’s solid rock music that gets your foot tapping and your mind moving. “You and me, we’ve got this thing that’ll fade if we stop runnin’."

A tour bus stands outside the door. Thompson simply decided to buy it, just like he decided during the pandemic to become a musician. Tonight is the first time he is performing before an audience, which in this case means his father-in-law, a close friend and the acclaimed photographer of the musical world, Danny Clinch. The letter board at the entrance reads: “ONE NIGHT ONLY –ZERO FANS TOUR".

Crazy? Of course. But aren’t successful people ultimately the ones who are crazy enough to believe in an idea right from the start – and also crazy enough to put it into practice? The lyrics of “Land of the Free” continue like this: “Yeah, we’re dreamers who believe we can turn nothing into something."

That’s what the people of New Orleans are like. This is already clear on the afternoon of the concert as we drive through the city in Thompson’s ivory-coloured 1963 Porsche 356 B, down narrow streets with live music on nearly every corner and past voodoo shops and funky restaurants serving fresh seafood. When we stop, people immediately want to talk, which admittedly might have something to do with the car. But then strangers start acting like friends. The city cultivates a quirky small-town atmosphere despite a population of nearly 400,000. Tourists can’t help but begin to imagine that they know every corner and every inhabitant – yes, that they feel at home – after just half an hour.

Thompson himself contributes to this feeling. When he meets new people he more often than not finds himself treating them like old friends. This suggests that the seemingly crazy streak that keeps showing up in his life is more of a mixture of curiosity and courage: two qualities that people often lose when they grow up.

"It’s the coolness that keeps bringing me back to Porsche." Tyler Thompson

"Do you know how I became a producer?” Thompson asks after parking briefly on Bourbon Street and negotiating a Netflix deal on the phone while chatting intermittently with passers-by. Well aware of the delightful nature of the story, his brown eyes light up and he can’t help but smile. After dropping out of college he was bored stiff at a trucking company he had started with his father Tim. He heard that actress Brittany Murphy, who has since passed away, was going to celebrate the end of a film project with a party in New Orleans, and “I wanted to be there!".

Thompson secretly borrowed an impressive sports car from his father’s garage, drove to the party, and acted as if he belonged. He was allowed in, and events rapidly took their course. He got to know people from the film industry who invited him to Los Angeles. “I had printed phony business cards and pretended to be the head of a catering company, thinking that was a good way into the sector,” he says with a smile. But then things took a different turn.

On the back seat of a taxi he found a screenplay – no joke. “I had never read one before,” he admits. From that moment on he was captivated by this fascinating but also at times ruthless industry. He wanted to make the movie Burning Palms from the screenplay, and asked his father for support.

Here it should be noted that Thompson’s father is a salt-of-the-earth type who has always enjoyed sparring in a genial manner with his son. About things like who in fact is the owner of this rare Porsche Carrera GT, of which only 1,270 were made. The car belongs to Tim Thompson, who made his fortune in the oil industry and proceeded to start numerous companies, all of which feature roll-up-your-sleeves types of work. Coming from this back­ground, he looked somewhat askance at his son’s dreams of life as an artist. But he also knew that Tyler was not at all crazy, but instead courageous and curious. Those two qualities made sense to him, so he invested in Tyler’s dream.

The first project was a sublime flop, but it only served to stoke the junior Thompson’s ambition. A giant lesson learned was the basis of creating Cross Creek Pictures, Tyler had inherited his father’s habit of not letting failure stand in his way. He was fascinated by the screenplay of “Black Swan“, which other producers had rejected. So he produced this ballet-based horror film for 13 million dollars. And Tyler’s hunch paid off: Black Swan brought in around 330 million dollars worldwide and Natalie Portman won an Oscar for best actress.

Thompson also shares his father’s love for Porsche. “I’ve driven all kinds of cars and was attracted by some of them but it’s the coolness that keeps bringing me back to Porsche,” he comments about the brand.

"Be curious, not judgmental” is a famous maxim from the great poet Walt Whitman. Thompson tries to embrace this advice and impart it to others. “Once I was giving a talk to film students when a camera crew was shooting outside. I told them they should go out right away and talk with the script writers, the director, the crew, that they’d learn much more out there than in here!”

He then tells the story of how he got the idea of producing the movie Everest from listening to what guests in a hotel lobby were talking about. He overheard people discussing an expedition to the highest mountain in the world, joined the conversation – and presented the adventure film two years later at the Venice International Film Festival.

That sounds so simple, but let’s be honest: who really seeks inspiration by striking up a conversation with two strangers in a hotel lobby? Thompson is precisely that kind of person, and that’s why he can tell stories like the time he asked Red Hot Chili Peppers singer Anthony Kiedis to teach him how to surf, and Thompson nearly drowned. Or how he – successfully – made it into the qualifying round of Indian Wells in 2018. All of Thompson’s anecdotes have a tongue-in-cheek or self-deprecating tenor. Other people are always the heroes. And that’s why he can make the following comment about his career as a producer whose films have earned over a billion dollars in ten years: “There was an awful lot of luck involved.” On the other hand, just about everyone who has known him for a while, such as his father-in-law, best friend, and band members, would add in his case that fortune favours the bold.

Some people react fearfully to crises, whereas others come into their own. Thompson managed to produce his films by viewing each one of them as a personal challenge. In Land of the Free he sings about dreamers who believe they can turn nothing into something. He succeeds because he has the courage to make the attempt and because he doesn’t hesitate to ask other people for help. Also because he’s a quick learner, as is evident from our talk. He is constantly asking questions while at the same time listening carefully and seeking to analyse. Several times throughout the afternoon he calls his wife to find out how her day has been going – as if the two of them had not spent the entire morning together playing with their daughter and three sons.

"I saw the pandemic as an opportunity to fulfil my dream of becoming a musician,” says Thompson, who admits that he jumped straight into steps two through five of the process. He bought a tour bus, booked a recording studio, planned concerts, and hired Steve Jordan – who is one of the industry’s most coveted drummers and has produced music for Keith Richards, Eric Clapton, and John Mayer, to name just a few – to produce his record. “Only then did I realise it’s important to take singing lessons – because your voice sounds different on stage than it does in the shower.” So he went back to the all-important first step and polished his vocal skills and songs. Then it became time to perform the works at this concert with no fans.

Thompson stands on the stage at Tipitina’s. At first he’s visibly nervous, even though only a few people are there. But in the middle of the first song he remembers a third childlike quality that adults often lose – which is simply to have fun! And suddenly the three-person band starts playing as if the bar were full to bursting.

“We’re dreamers who believe we can turn nothing into something.” Tyler Thompson

Of course Thompson has scheduled concerts for the months to come, and of course his album will be successful – and not only because he’s crazy enough to put his dream into practice. But also because the music is good, and because it comes from an individual who always promptly does whatever he wants to do.