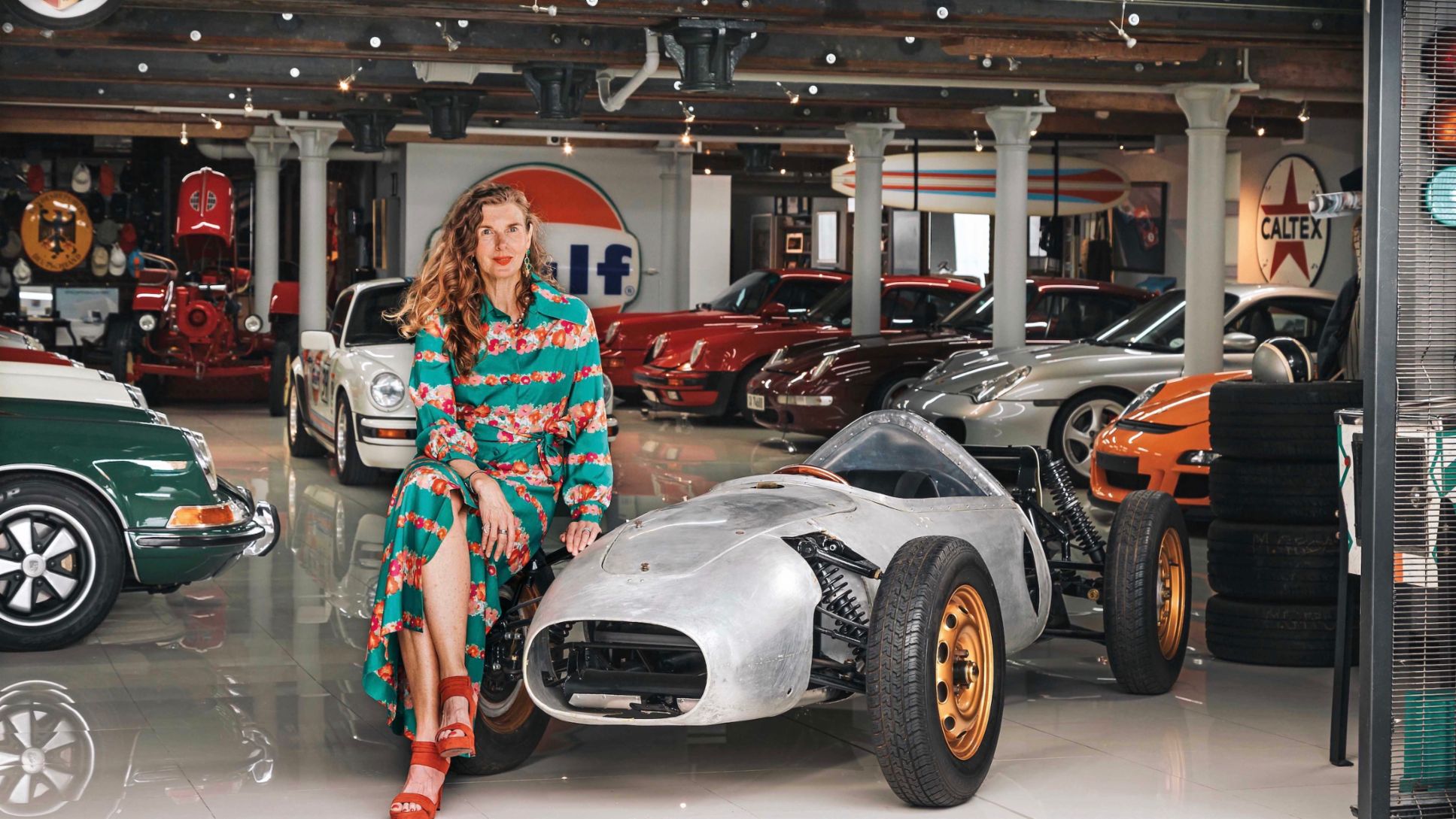 Stirling silver: on the hunt for the heart of a forgotten Porsche masterpiece

South African collector Michelle Hambly-Grobler wants to complete a barn find. She is looking for the engine that once powered Stirling Moss' Porsche 718 RS 61 Spyder.

The fabled barn find does indeed occur from time to time. One such discovery came to light in South Africa. The over sixty-year-old race car from the former South African Formula One championship turned up near Hermanus. It’s not uncommon to see whales here. The car, by contrast, is one of a kind.

The find is now parked—with a restored exterior—in Michelle Hambly-Grobler’s ample garage in Cape Town’s trendy suburb of Woodstock. On the inside, however, the car lacks precisely what would make it a rightful member of the collection: a Porsche engine. Hambly-Grobler bought it and had it restored all the same. She had pursued the one-of-a-kind model for years, and in early 2020 the initial finder was finally ready to sell. Since then, she’s mounted a worldwide search for the car’s original beating heart: a Carrera engine, model designation type 547. Displacement: 1,587 cc.

Affinity for cars is in the blood

The race car sits on the ground floor of a former textile factory. Michelle piloted her husband David and six children into this loft in order to provide a home for twenty masterpieces from Zuffenhausen and now, most recently, the Formula One veteran as well. Michelle’s affinity for cars is in the blood: her grandfather managed a Ford dealership, her father tinkered in his private garage, and her uncle raced. Michelle was just twelve when she had her first go behind the wheel. When she was in her twenties, Formula One driver Jochen Mass, then living in Cape Town, became a close and inspiring friend. Today she drives rallies and races. The successful project manager says that her passion for cars “opens doors to a wonderful community—diverse in every respect.”

When she first began collecting cars over two decades ago, her focus was on V8 icons from the USA. A 1968 Mustang Fastback was followed by a 1958 Corvette, which she drove to a meeting of the car community in Cape Town. That was the day when everything would change. An acquaintance handed her the key to his Porsche 911 Carrera RS along with the friendly advice to try German engineering instead of American big blocks. The extended test-drive turned out to be an awakening.

Her first Porsche was a 911 S. David initially greeted the delicate classic car with a volley of teasing, noting that it would almost fit in the luggage compartment of his Range Rover. But the die had been cast. Today the collection encompasses a Porsche Diesel Junior tractor from 1958, which the owner occasionally uses to run errands; a Speedster in Fjord Green from the same year; various 911 variations with the designations S, T, E, SC; two 911 Targas; a 911 GT3 RS; a Cayman GT4; two G series 911 Turbos; and a 928 S. In 2015, Michelle Hambly-Grobler was named the international Porsche personality of the year.

Detailed research on the 718 RS 61 Spyder by Stirling Moss

Regarding the latest addition to her illustrious fleet—the silver race car—the collector has researched every last detail. As she pages through an album with many historical photos from the 1960s, she recounts the history of the car.

A South African by the name of Bill Jennings single-handedly built the Formula car. In technical terms, his aim was to hew closely to the Porsche 718 RS 61 Spyder that Stirling Moss was driving with great success in long-distance races. The same 718 factory car, albeit with fender-clad wheels, was later the last and most beloved race car in the possession of the legendary Brit. Jennings wrote to Zuffenhausen inquiring whether Porsche might be willing to make an engine and transmission from the 718 available to him. Evidently respected for his engineering talent, Jennings did indeed receive an original Porsche engine, as well as the transmission and rear suspension, including the wheels. All spare parts from Stirling Moss’s 718. Used, but overhauled.

“Here you see the two at the South African Formula One Grand Prix in Kyalami,” says Hambly-Grobler, pointing to a black-and-white photo showing Moss and Jennings at the legendary racetrack between Johannesburg and Pretoria. After a few successful years with his special, hand-built Porsche replica, Jennings ended his racing career and became a farmer. Shortly thereafter, the engine was removed from the car and sold. The aluminum shell was covered by red paint and the car underwent a series of heart transplants. First came a Volvo engine, then an Alfa Romeo powertrain.

Hambly-Grobler, meanwhile, has compiled almost all the documents from Jennings’s race project with the Carrera engine and Stirling Moss genes. Her objective: to put in an appearance at the Goodwood Festival one day with the Formula car—complete with an original engine, which she still hopes to find.