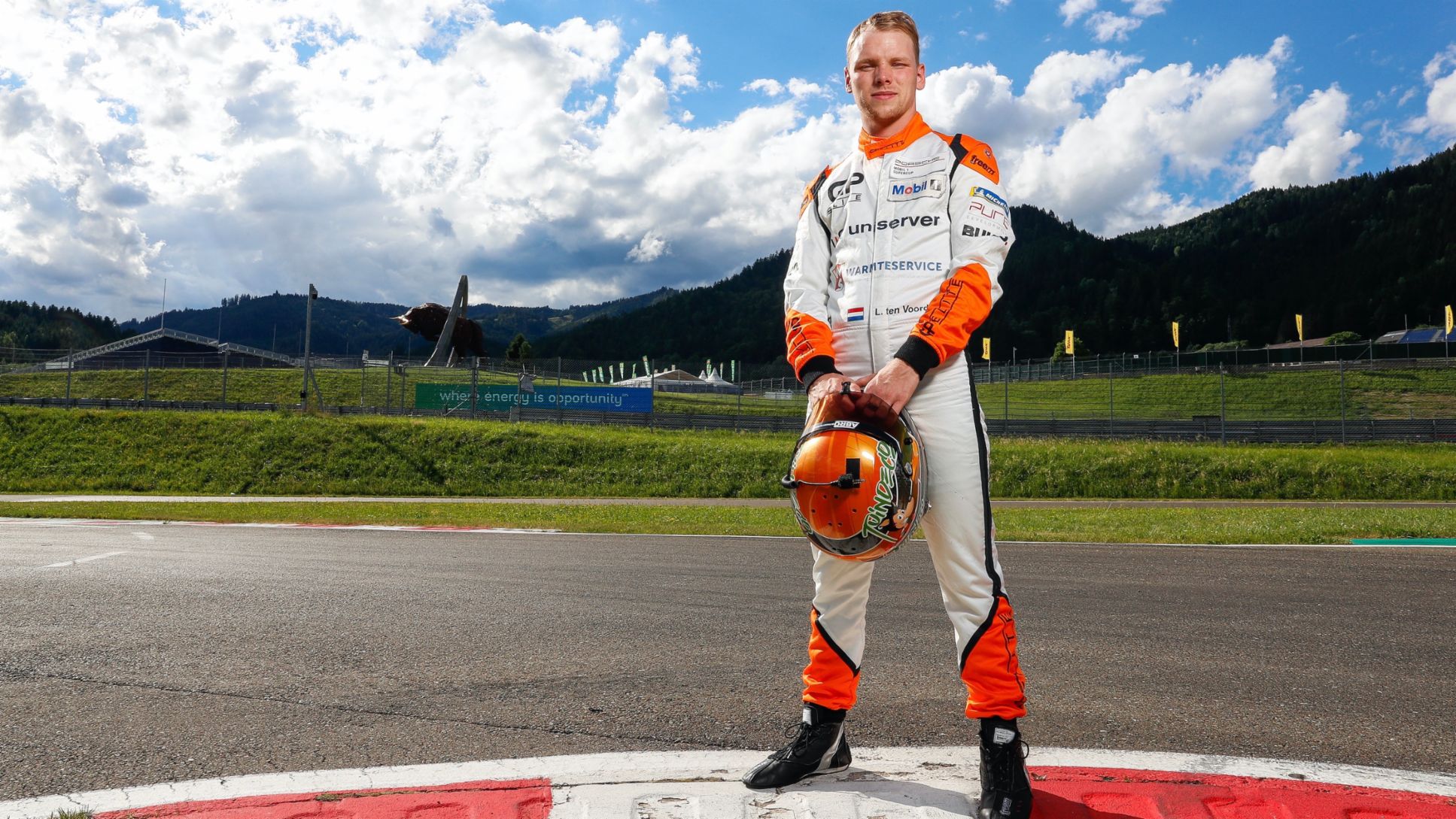 Larry ten Voorde has won the Porsche Mobil 1 Supercup title for the second time in a row. In an interview, the Dutchman from the GP Elite team talks about the meaning of motorsport in his homeland, his laborious path into professional motor racing and his friendship with Max Verstappen.

He also reveals why fly fishing is great mental training for his job in the cockpit of the Porsche 911 GT3 Cup, how he got rid of his nickname “Bing Bong Beule” and why his girlfriend doesn’t accompany him to the racetrack.

Congratulations on your second Porsche Mobil 1 Supercup title. Which one was harder to achieve, 2020 or 2021?

Larry ten Voorde: They always say the first title is the most difficult. I think that applies to me as well. Last year, my GP Elite team was still the newcomer to the Supercup. We learned a lot and worked very hard for the title. This year was a different situation. As the defending champion, you can only really lose. When you’re at the top, there’s pressure to stay there. I’m delighted that we were able to withstand the pressure and do it again.

What is the racing driver Larry ten Voorde doing better this year than last?

Larry ten Voorde: I continued my positive growth from last year and progressed further as a racing driver. I’ve taken a big step forward in my fitness. I’ve also become mentally stronger – in fact, we have as a team as well.

What was your best race in the season just gone?

Larry ten Voorde: Actually, there were two. The season-opener in Monaco because it’s something very special to win a race there, and then the Supercup round at the Hungaroring in Budapest. I started from fourth on the grid, had several great duels and finally was declared winner of the race. That was decisive for the overall victory in the Supercup.

You finished your home race in Zandvoort in fifth. Was that the worst race?

Larry ten Voorde: Yes. We experienced some problems, so fifth place wasn’t actually so bad. But, we managed to figure out and solve the problems before the final in Monza.

What do you think is so special about the Porsche Mobil 1 Supercup?

Larry ten Voorde: The unbelievable competition at the top. The Porsche Mobil 1 Supercup is the one-make cup with the best line-up in the world. If you prove yourself here, you’ve really achieved something. What’s more, Porsche provides support. I didn’t make it into the Junior Programme, but I see that as a positive today. By striking out on my own, I had to work even harder – and that shaped me. Of course, my goal is still to become a Porsche works driver.

How does a small country like the Netherlands with a population of just 18 million produce so many racing drivers?

Larry ten Voorde: Of course, there is the Max-Verstappen-Effect. We’ve never had a racing driver like Max in the Netherlands before. But even before him, we were good at working with young talent, in karting for example. Motorsport is also very important to us. There’s a lot of passion behind it.

How did you get into motorsport?

Larry ten Voorde: I don’t come from a motor racing family. I started karting with friends in 2005. Then I came to the kart track in Emsbüren in Germany. I spent a lot of time there and contested a lot of races. You could say I grew up on that kart track. I visited that track a couple of times recently because it’s going to close soon. In 2014 my racing career stalled because I didn’t have the money. During that time I began working at driver training courses, which also included GP Elite. I set up pylons and washed cars. That’s when I also started coaching and it’s how I returned to racing. I grabbed the chance.

What did your parents say when you decided to get into motorsport?

Larry ten Voorde: I still remember exactly what my father Henk said to me: If you’re going to race, do it properly. I told him: I want to be the best, I’ll do everything to achieve that. That convinced him and he supported me. His first requirement was that I had to do well at school. And I did that because it was the only way I could get time off to go racing. But my father also told me what I had to sacrifice, like partying for example. I followed his advice and it worked. I’m very grateful to my father for that.

What does your partner say about racing?

Larry ten Voorde: We’ve known each other since 2017 – my first season in the Porsche Carrera Cup Deutschland. That was a difficult time for me. I had to overcome a lot of hurdles. My girlfriend Huyen always stood by me and kept me buoyed up. Those were the moments I noticed how important she is in my life. After all, I’m on the racetrack more often than I am at home. My relationship with my girlfriend gives me the strength to do that.

But she doesn’t come with you to the races?

​​​​​​​Larry ten Voorde: We agreed on this from the start. I’m 100 percent focused at the racetrack, so I don’t want to be distracted by anything. She accepted that. But she comes with me once a year, normally to the Zandvoort event.

Would you support your own children in becoming racing drivers?

​​​​​​​​​​​​​​Larry ten Voorde: I would support my children in anything they want to do. If that turns out to be racing, that’s fine. And if it’s horse riding, I’d accept that too. When I think about it, it’d be pretty cool to coach my own son or daughter.

The Porsche Mobil 1 Supercup is part of the Formula 1 support programme. Do you occasionally meet Max Verstappen at the racetrack?

Larry ten Voorde: We know each other from our time together promoting young talent at the Dutch automobile sports association KNAF. We don’t actually see much of each other at the racetrack, but I drive for his Redline sim racing team, so we’re in frequent contact through that. I have a great deal of respect for him, he has really kept his feet on the ground.

When you race on a computer, does it teach you anything relevant for the Porsche Mobil 1 Supercup?

​​​​​​​Larry ten Voorde: Definitely the ambition to win. If you want to be successful at a professional level in sim racing, you have to train incredibly hard and invest a lot of time. It’s no different in “real” racing.

Do the many Dutch spectators at the racetrack, who are actually there to see Max Verstappen, give you additional motivation?

​​​​​​​Larry ten Voorde: Absolutely. They support me too. The Dutch love winners, be it in racing or football. It’s a great feeling to see all the orange in the stands and to hear the applause when I’m on the podium.

How do you physically prepare yourself before you step into the race car?

​​​​​​​Larry ten Voorde: I’ve developed a special programme with my personal trainer, which includes, for example, shadow boxing. I also do a few squats right before I get in, just to loosen up my legs.

Larry ten Voorde: I’ve been working on that a lot lately, for example with the coach Jake Aliker, who also looks after Formula 1 drivers like Max Verstappen. At GP Elite we also have a mental coach, Willem von Kleef, who works with everyone in the team. That helped me a lot as a racing driver.

What role does your fly fishing hobby play in that?

Larry ten Voorde: It used to play a big role. Even with fly fishing, you have to fully concentrate, you have to react to the fish and always stay calm. Unfortunately, I haven’t had the time to do that recently, so I really need to go and do it again some time.

How do you manage to bring your car back to the mechanics without scratches after every qualifying and every race?

​​​​​​​​​​​​​​Larry ten Voorde: That comes with the experience and mental strength that I have now. It was different in my early days when I was nicknamed “Bing Bong Beule” [“Beule” translates to “dent”]. I think you can probably guess how I got that name. I was under immense pressure at the time. Even in 2019, I’d never know on a race weekend if it would be my last. I never had enough sponsorship, and I took a big financial risk. But I learned from that. In 2020 I left this phase behind me for good. The team change from Huber Racing to GP Elite also played a role. It really wasn’t an easy decision for me. I had a great time at Huber Racing. Our common goal was to win the Porsche Carrera Cup in Germany. We did it, and I’m proud of that.

Your GP Elite team seems like one big family. How important is it for you to have a good team atmosphere?

Larry ten Voorde: Obviously, there’s pressure at GP Elite too. After all, we constantly aim to improve. But for me, it’s positive stress. I’ve known many of the guys since 2014. We work together with a long-term strategy. This is only our second year in the Porsche Mobil 1 Supercup, and the first year in the Porsche Carrera Cup Deutschland.

Are you a team player?

​​​​​​​Larry ten Voorde: 100 percent. I have no secrets from my teammates, they have access to all of my data. I even coach the 16-year-old Morris Schuring, who has also driven in the Porsche Mobil 1 Supercup. It’s fun in a team like GP Elite.

What job would you have today if motor racing hadn’t worked out?

​​​​​​​Larry ten Voorde: I didn’t have a plan B. I did everything to pursue a career as a racing driver, with all the risks involved.

The career of Larry ten Voorde