Lisa Taylor likes to invite kindred spirits who share a passion for Porsche to her ranch in Yorba Linda, just around the corner from Disneyland. Three hundred guests recently showed up in their favorite models, including countless 911s and a few historic Porsche diesel tractors as well. Lisa quickly fetched her own 1956 tractor from the barn, and a smashing race under 20 kmh ensued. “That was great fun! I simply love this 1956 manual transmission,” says Lisa Taylor with a hearty laugh.

Lisa Taylor loves old manual transmissions, Porsche, and vivid colors, if you please: “The paint has to match the character of the model.” A strapping sports car in a mousy gray? Not in a million years would such a thing find its way into her “barnage,” as she calls her repurposed stable. Where rows of gleamingly polished Porsche gems in Rubystar, Maritimeblue, and Racingyellow now stand, stately purebreds once awaited their next race. Taylor bought her first horse, named Lawai, in Hawaii in 2002 and had it flown to California. Her estate is named for it: Flying L Ranch. For several years she ran a successful stud farm, but after a riding accident in which she broke an arm and hip, Taylor bade farewell to the world of horse racing. “I traded in my horses for Porsches—it’s safer,” she says with a grin.

Today, Taylor indulges her passion for speed in autocross races and as a certified Porsche driving instructor, among other amusements. It therefore comes as no surprise to find a bevy of potent RS and Turbo models in her garage. A large Porsche crest adorns the white wooden walls; next to it hang framed mementos of vehicle handovers and a poster of Patrick Long’s Luftgekühlt Porsche gathering in Los Angeles. Spinning ceiling fans reflect in the brilliant bodies of the arrayed cars, including the gem of Lisa Taylor’s collection: a 911 GT3 RS in Rubystar, model year 2016. The original Porsche color was introduced in the 1990s with the 964 Carrera RS. Back then, the vibrant, pink-hued paint was part of the standard repertoire; today it’s part of the Porsche Paint-to-Sample program and an absolute rarity that Taylor waited a year and a half to get her hands on. On the day the GT3 RS rolled off the truck, an acquaintance made her an offer that exceeded the actual purchase price by an eye-popping $100,000. Taylor declined. Rubi, as she lovingly calls her super sports car, is not for sale.

“Rubi is not for sale!” Lisa Taylor

Back in the day, she says, she used to chuckle over people who gave their cars names, but nowadays she does it herself. There are very practical reasons for it. When Lisa and partner Tom are considering which car they should drive next, simply saying “let’s take the Porsche today” doesn’t do the trick. There are just too many of them for that. So each nickname is also a play on the respective model’s color. The 911 GT2 RS in Voodoo Blue is called Vudi; the Maritime Blue GT3 goes by Mari; the 2019 GT3 RS model in Racing Yellow is Bumble Bee; and her 911 Turbo S in Amethyst Metallic bears the moniker Ame. Taylor has particularly nice memories with that one. “We picked it up at the plant in Leipzig and then zipped straight down the autobahn to the Nürburgring,” gushes Taylor. Where she promptly bolted Ame through the “Green Hell” at up to 260 kmh. Taking the new car straight to the hardest of all racetracks? “It all turned out well,” says Taylor as she caresses the car’s deep-violet roof.

Lisa Taylor can’t exactly say where her love of bright paint jobs comes from. She’s more of an extrovert, always wanting to be a bit different than the others, she says. Which might explain why she bought a matching Porsche Design handbag for one or another of her sports cars. Above all, it’s all about the fun of driving. Taylor is delighted by the thumbs-up, the oohs and aahs she registers as she swishes through the streets of Los Angeles in her Porsche. Even as a teenager, she had a soft spot for extraordinary cars.

“With Vudi we actually took part in a long rally.” Lisa Taylor

Together with her father, Charles Taylor, a Ferrari enthusiast who owned the Testarossa No. 1, among others, she built her first car: a bright yellow Aztec kit car based on a Volkswagen chassis, with Lamborghini seats and gull-wing doors. She was so obsessed with working on the car that the boys who asked her out on dates didn’t stand a chance. “My father regularly threw his hands up over his head and muttered: ‘I’ve created a monster,’” she recalls. Even as a young kid, she was keen to help her dad in the garage. She studied business administration and joined the family business. Today she works alongside her two siblings Brent and Sheri as vice president of Tayco Engineering, an aerospace company founded by her father in 1970.

Like him, Lisa Taylor was long a Ferrari, McLaren, and Mazda fan, but ever since she first sat behind the wheel of a 911 Carrera Targa in 1981, she has referred to herself as “Porsche Girl.” “I was so impressed by the handling and the power that I sold my Mazda RX-7 the very next day and bought a 911 Targa in Guards Red,” she says, looking back. Many more Porsche models would follow. Unlike many collectors, she’s particularly interested in the latest creations coming out of Zuffenhausen. In 2018 alone, she took possession of three new vehicles at the Porsche Experience Center in Los Angeles within a six-month period. In this regard, the customer delivery numbers assigned there played a key role. Taylor's GT3 in Maritime Blue with the delivery number 15 was followed by a Macan Turbo in Carmine Red with the number 92. And because 15 plus 92 equals 107, her order of a GT2 RS in Voodoo Blue absolutely had to have the delivery number 107. So Lisa called Porsche and asked whether that number was still available.

It turned out that that number had already been taken by the vehicle reserved for actor Will Smith. But there’s no denying the wishes of such a loyal customer as Lisa, so today the erstwhile Prince of Bel Air drives around Los Angeles with a different delivery number. Comedian and Porsche collector Jerry Seinfeld has also encountered Lisa’s dauntless persistence. When he didn’t want to sell her his silver Cayenne Turbo, built in 2004, she wrote a check for the full price and waved it around in front of the telephone handset while talking to Seinfeld. “I said: ‘Listen, Jerry, here’s the money. Your Cayenne will be in good hands, I promise.’” Seinfeld gave in.

Notwithstanding her undeniable weakness for each new generation of Porsches, Lisa Taylor also appreciates the classics. She owns a 911 Carrera RS 2.7 in Oslo Blue, model year 1973, which she entered in the Steve McQueen Rally. This car was Taylor’s ticket to the famously selective R Gruppe. It took ten years for her to gain admission—yet another testament to her perseverance. Today she’s one of the few women members among over three hundred men in this nonconformist Porsche club.

The exact number of Porsches in her collection is Lisa Taylor’s closely guarded secret. “Not even my parents know the exact number,” she says. The collection is changing and expanding all the time. The next additions will be the new 911 Speedster and, a particular highlight, the Taycan Turbo S. “That will be a real transition for me, driving a Porsche like the Taycan, which is so quiet and yet so powerful at the same time,” she says. Lisa doesn’t want to give away the color of the fully electric sports car, but she will say this: “An elegant vehicle naturally requires an elegant color.” And who better to judge that than Lisa Taylor.

The fifty-eight-year-old Californian’s passion for Porsche was ignited in 1981, when she sat behind the wheel of a 911 for the first time. Today, Taylor owns many Porsches—the exact number of which she keeps to herself. At the Christophorus photo session at her ranch she presented a good dozen. Taylor's passion for Porsche is also reflected in her three Bernese mountain dogs: two of her four-legged friends go by the names Turbo (left) and Targa (front). The third is called simply Koabear. 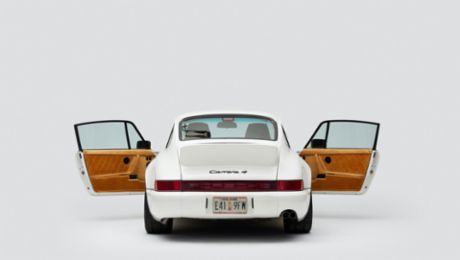 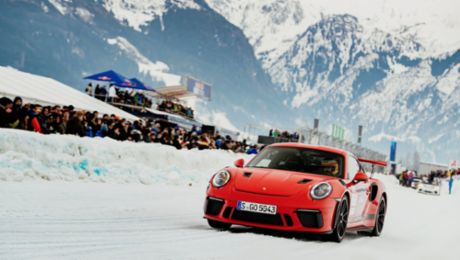 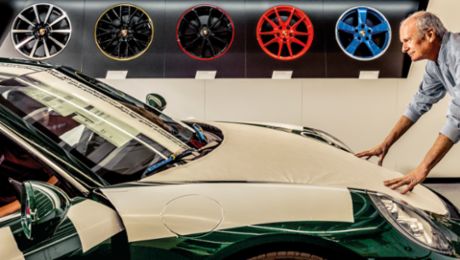 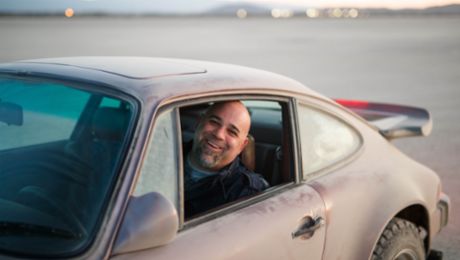