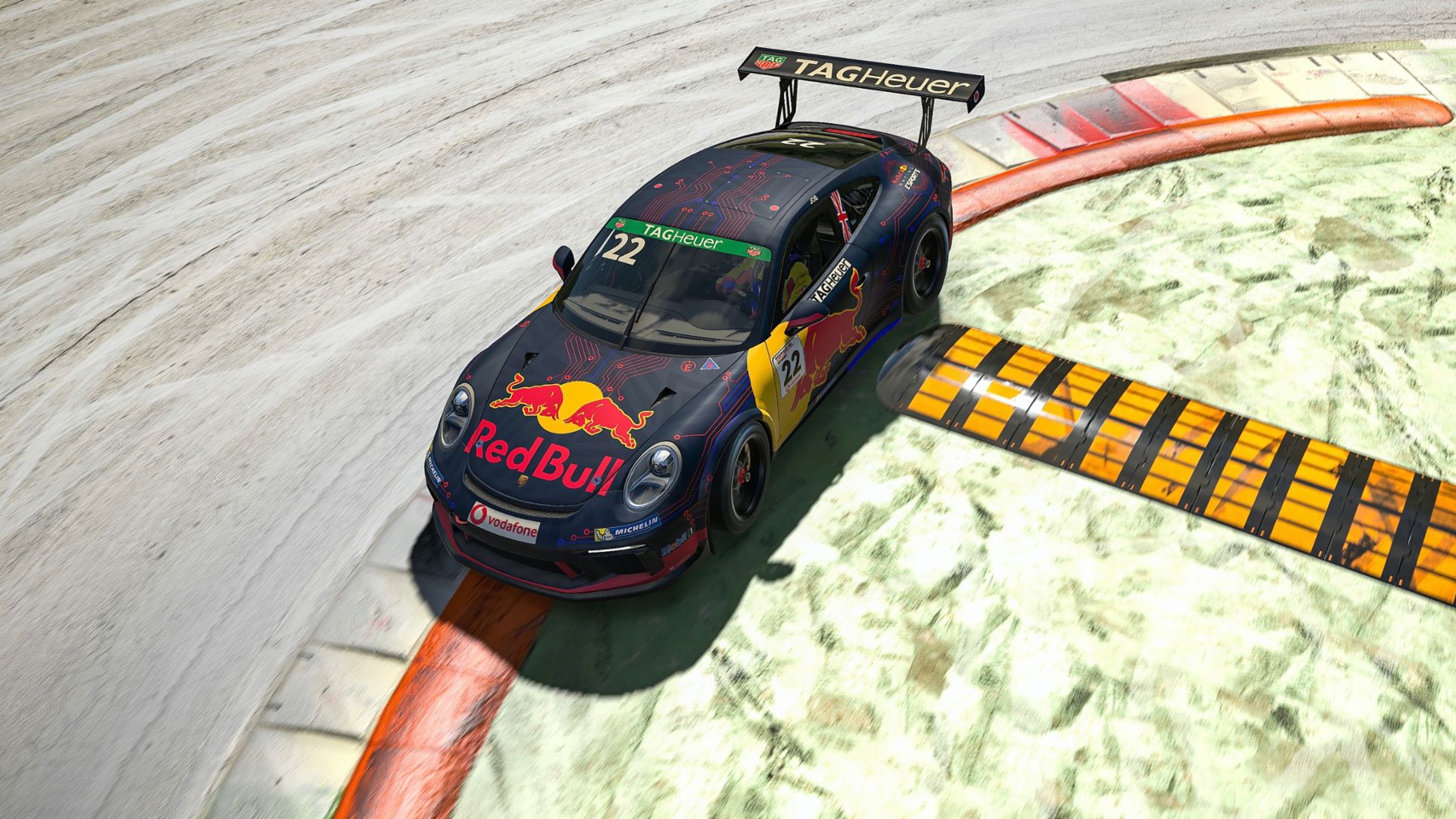 The new champion of the Porsche TAG Heuer Esports Supercup is Sebastian Job. At the last race of the season on the Monza Grand Prix circuit, the British sim driver from the Red Bull Racing Esport team took the championship trophy from the defending champion Joshua Rogers (VRS Coanda Simsport).

The Australian had to settle for second place. The virtual one-make cup is run on the iRacing simulation platform with the digital version of the Porsche 911 GT3 Cup.

Heading into the season finale, Rogers still had a chance to wrest the crown from Jobs. In qualifying, he underlined his ambitions and turned the fastest lap for the eighth time this year. His advantage over Job, however, was only four-thousandths of a second. Due to the reverse starting order in the sprint race, as stipulated by the regulations, the two rivals for the title took up the race from positions seven and eight. Jamie Fluke (Great Britain/Apex Racing Team) spearheaded the field from pole position, with Spain’s Alejandro Sánchez (MSI eSports) and the British Red Bull Racing Esport driver Graham Carroll lining up behind him. In the first lap, Job and Roger treated viewers to some inspired duels. A few minutes later, the championship title was decided: a collision between two drivers in front of the title aspirants in the Variante della Roggia passage resulted in the cars touching. Job fell back to 11th place, with Rogers thrown down the field to 25th. Although the championship was in the bag, Job launched a breathtaking pursuit race and was ultimately rewarded with fifth place. With Rogers finishing on 24th, this result was enough for the British sim racer to claim the title after the sprint race. At the front of the pack, Carroll valiantly fended off Fluke, Sánchez and the Norwegian Tommy Östgaard (VRS Coanda Simsport) to score his second win of the season.

#PESC - Final race of #Porsche @TAGHeuer Esports Supercup @iRacing racetrack of #Monza is in the books – and we have a champion. 2nd place for @G2Sebi behind @redbullracingES team mate @grahamcarroll33 is enough to secure the title. Congrats! pic.twitter.com/EA5IcT6JjY

The streak of bad luck followed Joshua Rogers into the main event. The Australian spun while braking for the second chicane and fell back to 28th. At the lead, Carroll outpaced Fluke and Östgaard at the start. However, it took only two laps for Job to plough from fifth and chase down the leaders. In the fight for victory, Östgaard threw caution to the wind and squeezed past Job with an impressive outbraking manoeuvre. The newly crowned champion fell back to sixth place but soon fought his way back into the leading pack. After a gripping wheel-to-wheel battle with Östgaard, Carroll once again took the winner’s trophy. Behind him, the Norwegian missed the braking point for the first chicane. He was handed a slow-down penalty, which relegated him to third place behind Job. Recovering from his early mishap, Rogers made up 19 positions to take the flag in fifth place.

“Congratulations to Sebastian Job on his well-deserved title victory. He was super-fast over the entire season and impressed with his incredible consistency. The level of driving skill in the Porsche TAG Heuer Esports Supercup was extremely high this year. This makes us all the more excited about next season, which begins in early January. My special thanks to iRacing and all of our partners for their great support,” said Marco Ujhasi, Manager Esports Porsche Motorsport. In 2021, the Porsche TAG Heuer Esports Supercup heads into its third season, with the first round contested on 9 January at the virtual Interlagos Grand Prix racetrack. The racing calendar is made up of ten rounds until late April, run on the iRacing simulation platform and contested at venues such as the Nürburgring-Nordschleife, the Circuit des 24 Heures in Le Mans, and the Formula 1 street circuit of Montréal.

Sebastian Job (GB/Red Bull Racing Esports): “It’ll take a while before I realise that I’ve won the title. I would never have thought it possible when I started sim racing. I’m lost for words. It was fantastic to cross the finish line with my teammate Graham Carroll. Now I can’t wait for the next season, which will start soon.”

Joshua Rogers (AUS/VRS Coanda Simsport): “First of all, congratulations to Seb Job, he really deserves the title. Obviously, I’m a little disappointed, but at the same time, I’m satisfied. The sprint race didn’t go as I’d planned. In the main race, I started from 24th and finished on fifth – that was a fun way to conclude the season.”

Graham Carroll (GB/Red Bull Racing Esport): “I won the first and last race of the season. Next year I’ll have to work on the ones in between. Today, I won the sprint and the main race – so I’m over the moon. Now I want to carry this momentum with me into the next season.”

The venue for the showdown between Sebastian Job (Red Bull Racing Esport) and his Australian rival Joshua Rogers (VRS Coanda Simsport) in the global one-make cup series run on the iRacing simulation platform is the digital version of the Monza Grand Prix circuit. With its long straights, tight chicanes and demanding corners, the 5.793-kilometre racetrack offers drivers of the virtual Porsche 911 GT3 Cup the ideal conditions for swift slipstream duels and daring braking manoeuvres. Adding to the spectacle are two All-Star races, in which some of the most famous influencers of the Esports scene will compete.

At the latest race at Le Mans a fortnight ago, the reigning champion Joshua Rogers went for broke. Clinching pole position as well as second place in the sprint race, and victory at the main event, the Australian harvested almost maximum points and slashed the gap between himself and Sebastian Job to 71 points. However, the British sim racer from the Red Bull Racing Esports team needs only six points at Monza to claim the crown in the fiercely competitive championship.

As the crowning finale of a gripping PESC season, live-stream viewers will be treated to another highlight as part of the Monza event: From 13:45, prominent influencers from the Esports scene will fight for fame and glory in two All-Star races. The star line-up includes Dave Gaming and Jardier, Maxime MXM as well as Heikki360ES and Jimmy Broadbent. The qualifying session determines the grid positions for the sprint race. The sim racers then tackle the main event in the reverse order of the sprint results.

#PESC - Cliff-hanger situation in the #Porsche @TAGHeuer #Esports #Supercup: The title decision between @G2Sebi and @JKRogers_92 goes down to the wire this Saturday at the last race weekend of this year’s @iracing series in #Monza. More information ⬇️https://t.co/ksCIahBgiC

On the virtual racetrack in the Royal Park, sim racers will contest a 15-minute sprint race followed by a 30-minute main race. Round ten also includes a free practice, a qualifying and a warm-up session. Fans can watch the final event live on Porsche’s Twitch and YouTube channels. Both races are also streamed on these two video platforms via iRacing. Further information on the Porsche TAG Heuer Esports Supercup can be found on the Porsche Porsche Motorsport Hub, Porsche Newsroom and the Twitter account @PorscheRaces.

The schedule (10 October; all times CEST) 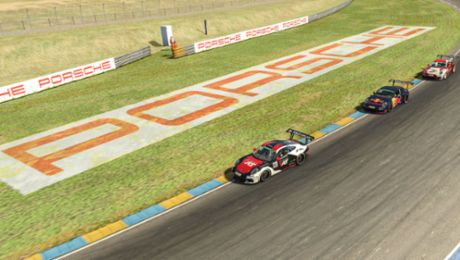 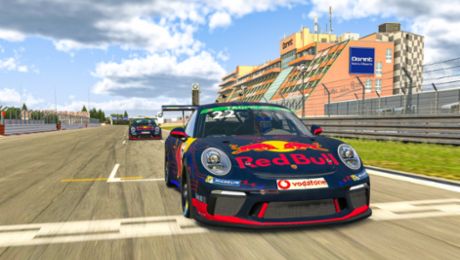 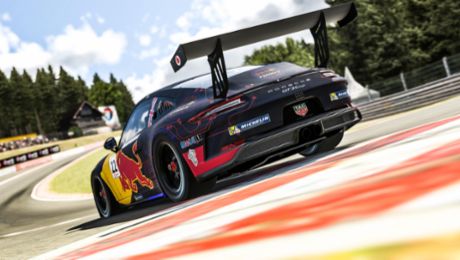 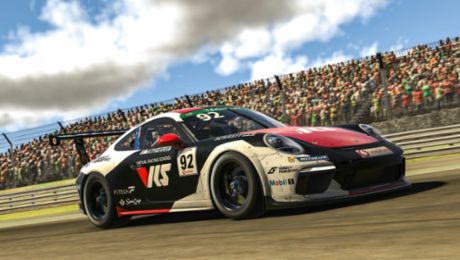