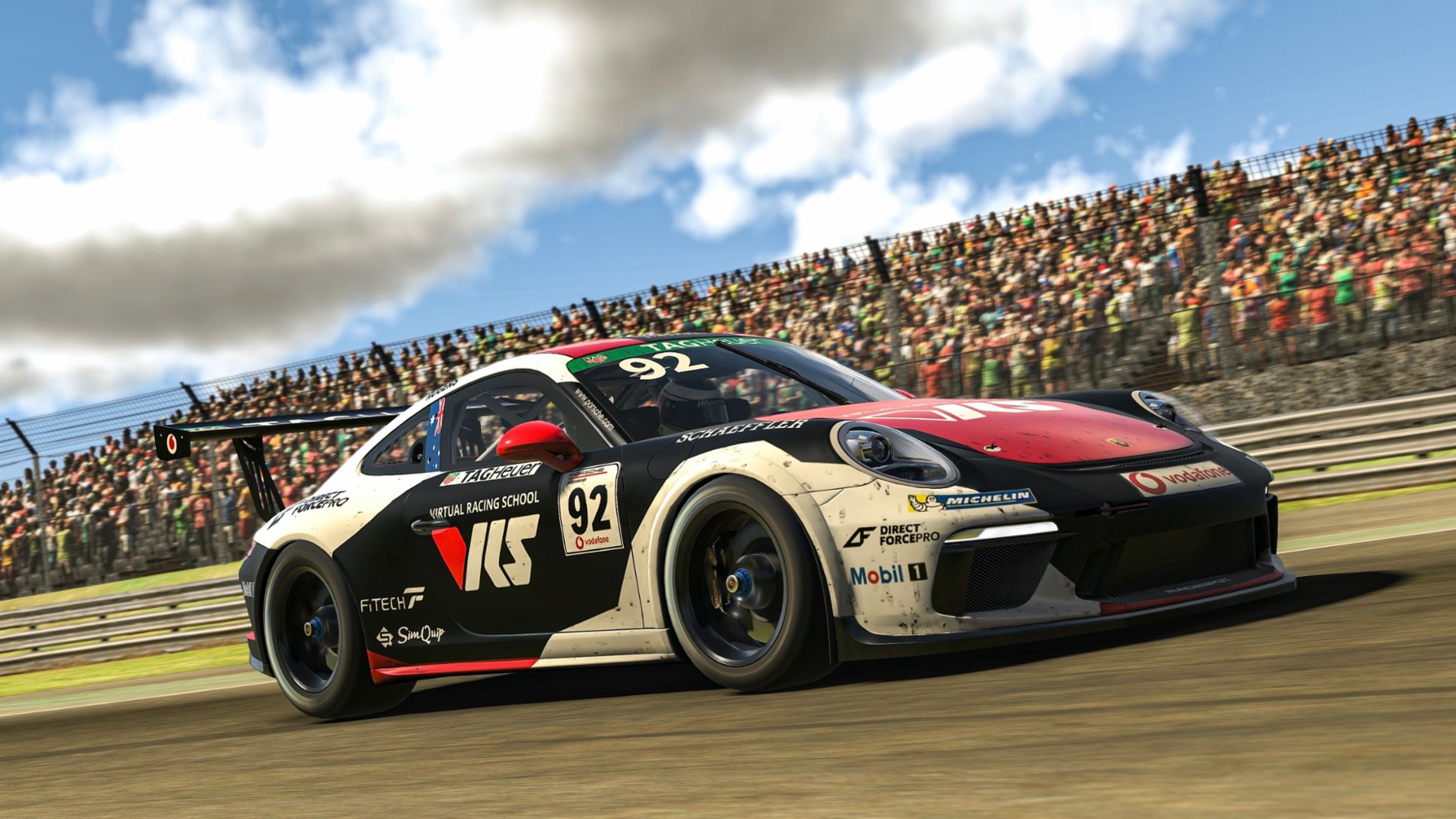 Title defender Joshua Rogers has further reduced his gap to the top of the leaderboard in the Porsche TAG Heuer Esports Supercup. On the virtual version of the storied British racetrack of Brands Hatch, the Australian VRS Coanda Simsport driver snatched the lead in the main race after an inspired overtaking manoeuvre.

Rogers won despite persistent attacks from Alejandro Sánchez (E/MSI eSports). The Spaniard had taken up the sprint race from the second grid spot after a tactically clever qualifying and went on to score a commanding victory. In the overall standings in the global sim racing championship, Rogers has edged closer to the points’ leader Sebastian Job (GB/Red Bull Racing Esport), who had to settle for third in the main event at Brands Hatch.

For the first time this season, Joshua Rogers had to relinquish pole position to a rival: Dayne Warren (AUS/Logitech G Altus eSports) turned the fastest lap on the 3.703-kilometre Grand Prix version on the tradition-steeped racetrack in southern England ahead of Sebastian Job. Alejandro Sánchez deliberately held back and, posting the seventh quickest qualifying time, planted his digital Porsche 911 GT3 Cup on the first grid row of the sprint race – the fastest eight in qualifying line up on the grid in reverse order. From P1, Jamie Fluke (GB/Apex Racing UK) got off the line perfectly, only to have Sánchez draw parallel to the Briton after a few kilometres, squeeze ahead of him in the Graham Hill Bend and pull clear to clinch a decisive victory. Behind the Spaniard, a heated battle for positions unfolded: First, Joshua Rogers snatched position four from Sebastian Job and then reeled in the Frenchman Yohann Harth (Apex Racing UK). Shortly afterwards, he set his sights on position two in the ‘Druids’ passage. Through several corners, he drove door-to-door with Jamie Fluke, who fended off the attacks at first – doing so well that Job used the situation to get past Rogers on the inside and move into third. In the successful attempt of the Briton to snatch Fluke’s second place, Rogers turned the tables, overtook Fluke to take third place behind Sebastian Job. While Alejandro Sánchez scored victory in the sprint race by more than four seconds, Fluke defended fourth place against a determined pack of pursuers.

The main race over 30 minutes began dramatically: Sebastian Job and Alejandro Sánchez made contact after the start. The leading Spaniard remained unscathed, however Job fell back to fourth. After fending off an early attack from Jamie Fluke, there was only direction for Joshua Rogers: to catch Alejandro Sánchez. The Australian pulled alongside the digital Porsche 911 GT3 Cup of the Spaniard’s sister car several times, only to have Sánchez successful defend himself – until Rogers made a decisive move halfway through the race: In Druids, he cut to the inside of the number 47 car and, despite valiant resistance, outpaced him to Hawthorne Corner. Although coming under intense pressure from the Spaniard, it was not enough to stop Rogers’ drive to his second victory of the season. Meanwhile, Sebastian Job did his utmost to mitigate the damage. After overtaking Jamie Fluke, he set his sights on the leading duo, but was unable to come within striking distance and climbed the podium next to his title rivals Rogers and Sánchez.

After the sixth race weekend, Sebastian Job leads the overall classification with a mere 14-point advantage. Joshua Rogers (346 points) and Alejandro Sánchez (333 points) have gained a lot of ground thanks to their Brands Hatch victories. Round seven of the Porsche TAG Heuer Esports Supercup is contested on 29 August, 2020, on the virtual version of the Circuit de Spa-Francorchamps. The Belgian “Ardennes rollercoaster“ is considered one of the world’s most demanding racetracks and, as such, is one of the hot favourites for many drivers. Most of the ultra-fast corners with their illustrious names – most notably the famous Eau Rouge dip – demands courage, vehicle control and a perfect setup.

Joshua Rogers (AUS/VRS Coanda Simsport): “I didn’t get a good qualifying lap in, it really didn’t go perfectly. Fortunately, I managed to make up for it in the sprint. Early in it, I was too impatient when I tried to get past Jamie. In the main race, Alejandro again underlined that he’s very fast at the moment. I’m sure that he’s one of the hot contenders for the title. It’s fun racing against him, we are always fair with each other. Brands Hatch delivered a great show. Overtaking here is pretty hard, but sometimes the races are better on such circuits than on high-speed ones. Now we head to Spa. It’s a completely different track and we’re all starting from scratch.”

Alejandro Sánchez (E/MSI eSports): “Second place is okay, although I’m a little disappointed. The car felt really fast, so I’d hoped to win. But I couldn’t match Josh’s pace in the main race. Before he overtook me, I veered off the racing line briefly. With a view to the overall standings, I’m very pleased with my points tally – thanks to my team, I’m in the top three of the championship.”

Sebastian Job (GB/Red Bull Racing Esport): “I’m annoyed that more than third place wasn’t possible, because I think I could have done better. I made contact with Alejandro’s car at the start, which knocked the steering wheel out of my hand, and my finger hit the speed limiter for the pit lane. I panicked for a moment, and when I tried to accelerate again, I spun. Luckily, Max and Yohann had their wits about them and gave me space. With third place, we’ve limited the damage. Now comes Spa, a track that I love. I’d like to make up for the mistake I made there last year and hope that it all goes better this time.”

On Saturday (15 August), the United Kingdom hosts the Porsche TAG Heuer Esports Supercup for the third time this season. Famed for its mix of hidden crests, large differences in altitude and diverse corner combinations, the virtual version of the Brands Hatch racetrack, which loops over almost four kilometres through the forested countryside, poses a real challenge for drivers – especially in combination with the digital double of the Porsche 911 GT3 Cup.

With round six of the global esports championship run on iRacing’s simulation platform, the thrilling fight for driver’s crown enters the decisive phase.

Almost a fortnight ago, Sebastian Job from the Red Bull Racing Esports squad defended his overall lead in the fiercely-contested championship on the Road Atlanta circuit. With five races left on the calendar, the Briton has 290 points to his credit. Just 18 points behind, Joshua Rogers (Virtual Racing School / Coanda Simsport) sits hot on the bumper of the championship leader: the reigning champion scored his first win of the season on the American rollercoaster racetrack. Another hot aspirant for the title is MSI eSports driver Alejandro Sánchez. The Spaniard ranks third with 263 points.

On the digital version of the Brands Hatch circuit, sim racers contest a 15-minute sprint race followed by a 30-minute main race. Fans can watch the event live on Porsche’s channels Twitch and YouTube. Both races are also streamed on the two video platforms via iRacing. Further information on the Porsche TAG Heuer Esports Supercup can be found on the Porsche Motorsport Hub, Porsche Newsroom and the Twitter account @PorscheRaces.