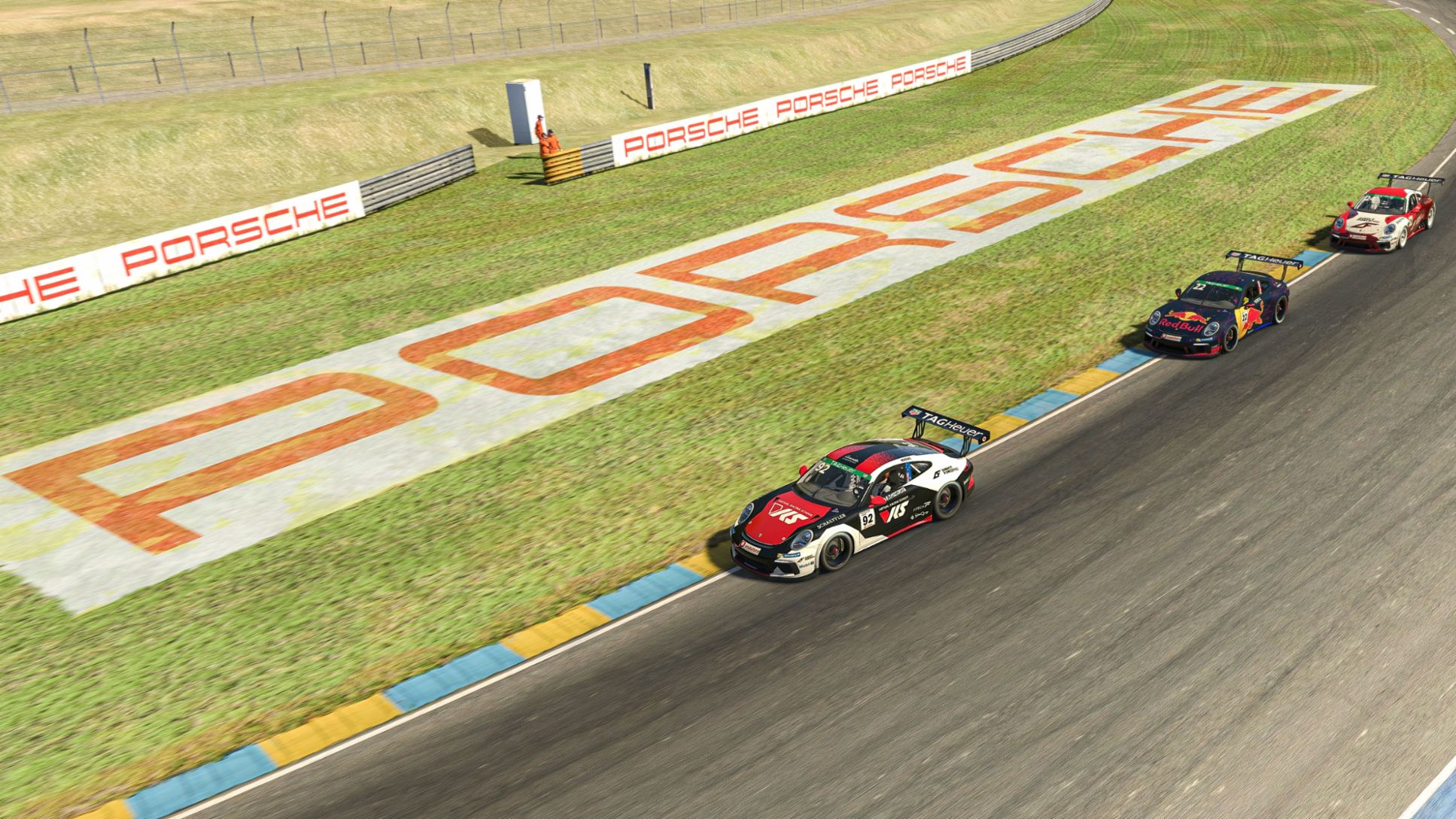 The duel for the championship crown in the Porsche TAG Heuer Esports Supercup remains gripping to the end. Clinching second place in the sprint and a victory in the main race on the virtual Circuit de la Sarthe in Le Mans, Joshua Rogers has pushed the title decision out to the season finale at Monza.

Clinching his seventh pole position this season, title defender Joshua Rogers (Australia/VRS Coanda Simsport) once again underlined his qualifying prowess. Due to the reverse starting order, as stipulated by the regulations, he took up the sprint race from P8. His closest rival Sebastian Job started from the sixth grid spot. At the front of the field, Mitchell DeJong (USA/VRS Coanda Simsport) defended his top spot from Red Bull Racing Esport driver Graham Carroll and Finland’s Tuomas Tähtelä (Logitech G Altus eSports). At the green light, Rogers immediately attacked. By lap two, he had moved up to seventh place and waited in Sebastian Job’s slipstream for his chance. The pair put on a spectacular show, swapping positions several times. In the end, Roger’s prevailed and promptly went in pursuit of his teammate Tommy Östgaard. In the last lap, Rogers pulled past the Norwegian on the long Mulsanne straight into fifth place. With full commitment and strong overtaking manoeuvres, the Australian fought his way forward to second position in a dramatic final phase marked by several collisions. Thanks to this performance, he kept his chances for the championship title open. Job crossed the finish line in fourth behind Graham Carroll. At the front of the pack, Mitchell DeJong celebrated his first win of the season.

The main race over eight laps was also characterised by close duels between the two main title aspirants. Shortly after the start, Job slipped past his teammate Carroll into third. Rogers snatched the lead from DeJong along the long Hunaudières straight. Shortly afterwards, Job squeezed past DeJong and again appeared in Roger’s rear-view mirror. Again and again, the Briton pulled alongside the Australian but was unwilling to take any unnecessary risks. He ultimately took the flag in second place, just 0.3 seconds behind the winner. Thanks to his victory, Rogers has postponed the title decision. DeJong achieved another strong result with third place. The midfield sim racers treated online spectators to some thrilling action over many laps, particularly with the fight for eighth place between Alexander Thiebe from the German team Redline, Tähtelä, the Spaniard Alejandro Sánchez (MSI eSports) and Sindre Setsaas (Norway/CoRe Simracing). At the flag, Tähtelä prevailed and relegated Thiebe and Sánchez to positions nine and ten.

Joshua Rogers (AUS/VRS Coanda Simsport): “I tried everything to push the championship decision out to the last race weekend at Monza. It worked. I’ve always done well at Le Mans and I enjoyed some exciting slipstream duels with Sebastian and Mitchell – it was great fun. My gap to the top of the overall standings may be huge, but as long as I have any chance, I’ll never give up!”

Sebastian Job (GB/Red Bull Racing Esports): “First of all I’d like to apologise to Tommy Östgaard for the incident in the sprint race. I drove too wide in the last chicane and pushed him out. Today’s races went really well for me. I managed to defend myself in the top group. The main race was really close. Maybe I could’ve pushed past Josh, but I didn’t want to risk too much – although I would’ve preferred to seal the deal in the championship today. Although my advantage is big heading to the final round, I haven’t won yet.”

Mitchell DeJong (USA/VRS Coanda Simsport): “It’s great to be back at the front again. The weekend began perfectly. My fastest lap in qualifying didn’t feel ideal, but it was enough for pole position. From this grid spot, I managed to make the most out of the sprint and bring home victory. In the main race, the three-way fight between Sebastian, Josh and me was very well matched. We gave each other a tow and were able to pull clear of the field. None of us tried anything stupid, it was clean racing. It was huge fun!”

The final round of the Porsche TAG Heuer Esports Supercup season will be contested on 10 October at the virtual version of the Autodromo Nazionale Monza. The Grand Prix circuit in the middle of the royal park with its long straights is one of the fastest racetracks on the 2020 calendar.