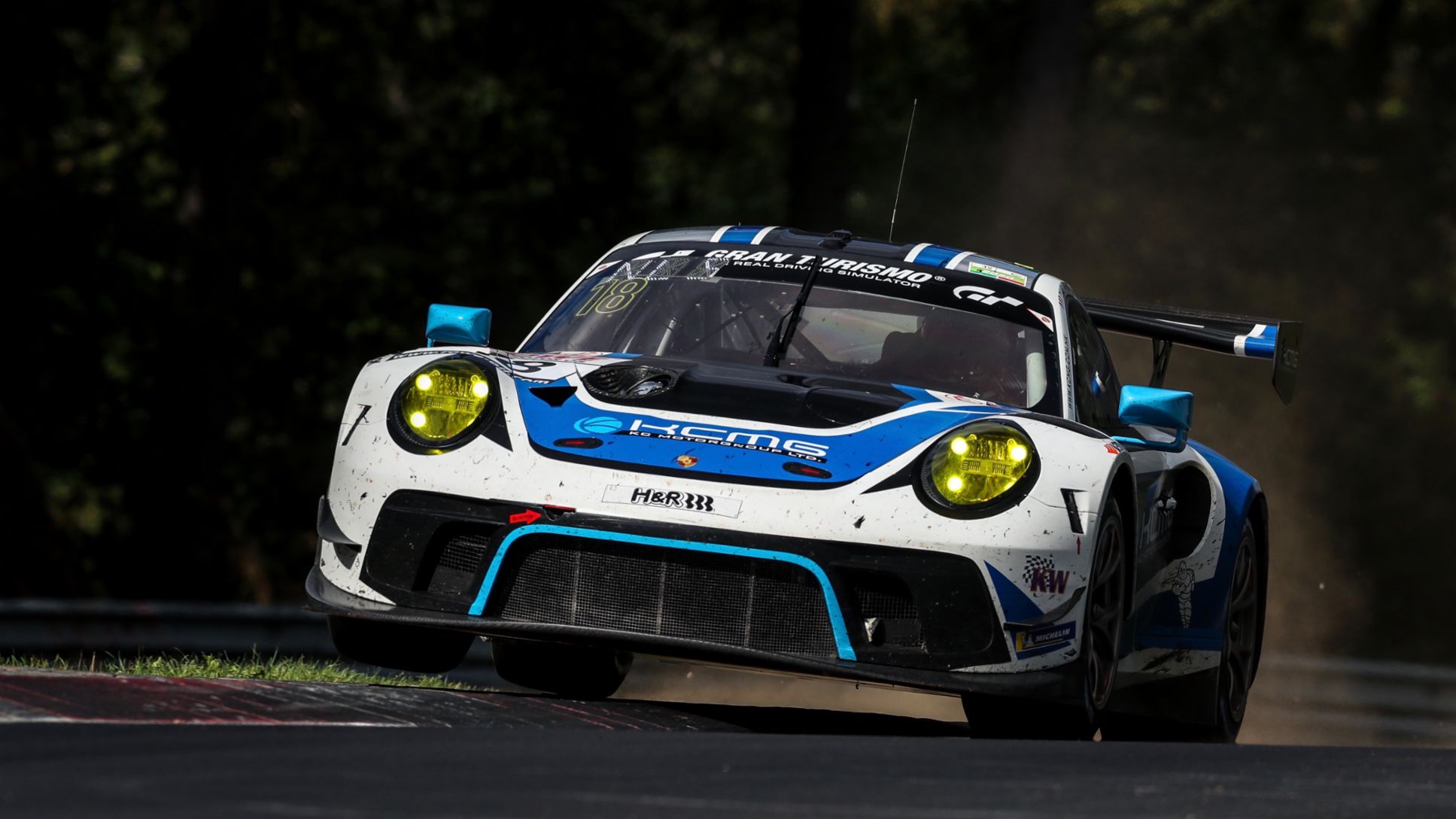 Round five of the Nürburgring Endurance Series (NLS) concluded on Saturday with positions nine and ten for the two best-placed Porsche contenders. The season highlight of the NLS also served as the final test run before the 24-hour race on the storied racetrack, which has been postponed to September 26-27.

Over the last few metres of today’s six-hour race on the combination of the short Grand Prix circuit and the revered Nordschleife, Dennis Olson (Denmark) in his No. 18 KCMG car managed to catch the No. 31 Frikadelli Porsche. Both benefited from a four-minute time penalty that had thrown Manthey Racing’s 911 GT3 R from fourth to 13th at the flag.

Immediately after the start, the order was completely reshuffled: With Bachler at the wheel, the No. 4 car ploughed its way through the field to seventh place on the first lap; the Manthey-Porsche with Christensen in the cockpit moved into 12th place. After a good 30 minutes, an accident at Döttinger Höhe triggered a longer Code 60 phase, which the Frikadelli-911 GT3 R (31) and the No. 19 KCMG Porsche used perfectly for their first pit stop. Both then joined the frontrunner pack. At the midway mark of the six-hour race, they were running in first and third place respectively, while the No. 4 car lost some ground – a rival had slid into the rear of the nine-eleven, however, the damages were quickly repaired.

Heading into the last third of the race, the No. 19 had to pull into the pit for repairs after taking a hit and thus lost all chances of a podium spot. Meanwhile, Manthey Racing’s Porsche sporting the distinctive “Grello” livery as well as the No. 4 vehicle fielded by Falken Motorsport reappeared at the top. Luck, however, also evaded both vehicles: The No. 911 was handed a four-minute penalty after violating a caution phase, while Peter Dumbreck had to park his Falken Motorsport nine-eleven trackside with a puncture. This opened the door for works drivers Michael Christensen (Denmark) and Kévin Estre (France) and their teammates Jeroen Bleekemolen (Netherlands) and Maxime Martin (Belgium) to move up to ninth place in the No. 31 entry of Frikadelli Racing. In the 41st and final lap on the 24-kilometre circuit, they had to let the KCMG’s No. 18 Porsche pass, which was shared by Dennis Olson with works drivers Romain Dumas, Patrick Pilet (both France) and Richard Lietz (Austria).

Sebastian Golz (Project Manager GT3 R): “Round five of the NLS was a very educational weekend for us. We’ve collected a great deal of information on the setup and the race tactics to prepare for the 24-hour race, which will be contested in just one month. We’ll probably face colder temperatures, which is why our focus today was to check the tyre temperature window again, especially in the early morning hours. All of the teams had no problems whatsoever with the 911 GT3 R, so we’re well-positioned in that regard. The result wasn’t quite so important today. Unfortunately, we had to accept some small setbacks, which is also why we couldn’t bring home Manthey-Porsche’s hard-won fourth place. We can do better in warning our drivers about caution phases and similar situations. Overall, we were able to use this race to uncover our last vulnerabilities. Now we can look ahead with optimism and head home from this race with a very good feeling."

Romain Dumas (Porsche 911 GT3 R #18): “The qualifying could’ve gone better, but we didn’t get a free run, which meant we were further down the grid at the start. Still, we managed to fight back and make up almost 20 positions. We learned a lot for the 24-hour race, also in terms of internal processes. Of course, you always want to do better, but ultimately it was a pretty solid performance. We’ll continue working in the direction, the results will then come.”

Richard Lietz (Porsche 911 GT3 R #18): “A good race considering. I drove two stints to prepare for the 24-hour race. Initially, things were a bit bumpy, but the rhythm quickly returned. In qualifying, we had to overtake a little too much traffic and when you start from behind there’s a greater chance of losing time under yellow. Still, the teamwork with the squad and the drivers went smoothly, we all have a similar understanding of the setup. We’re going to make some changes to improve the balance of the Porsche.”

Patrick Pilet (Porsche 911 GT3 R #18): “The race was a bit difficult. I didn’t get a free lap in qualifying and had to start from 29th . And then at the beginning we lost time trying to close the gap to the top. But everyone did a great and flawless job – that’s important. In the end we finished on tenth, which I think is a decent result. The team was able to improve over the race weekend, which was good preparation for the 24-hour race.”

Michael Christensen (Porsche 911 GT3 R #31): “We concentrated more than usual on preparing for the 24-hour race. We learned a lot about the Porsche and the tyres and we became better acquainted with our new teammates. Everything ran pretty well. We had to start from 25th and finished in the top ten – that’s impressive.”

Further information, film and photo material in the Porsche Newsroom: newsroom.porsche.com. The Twitter channel @PorscheRaces provides live updates from Porsche Motorsport with the latest information and photos from racetracks around the world.